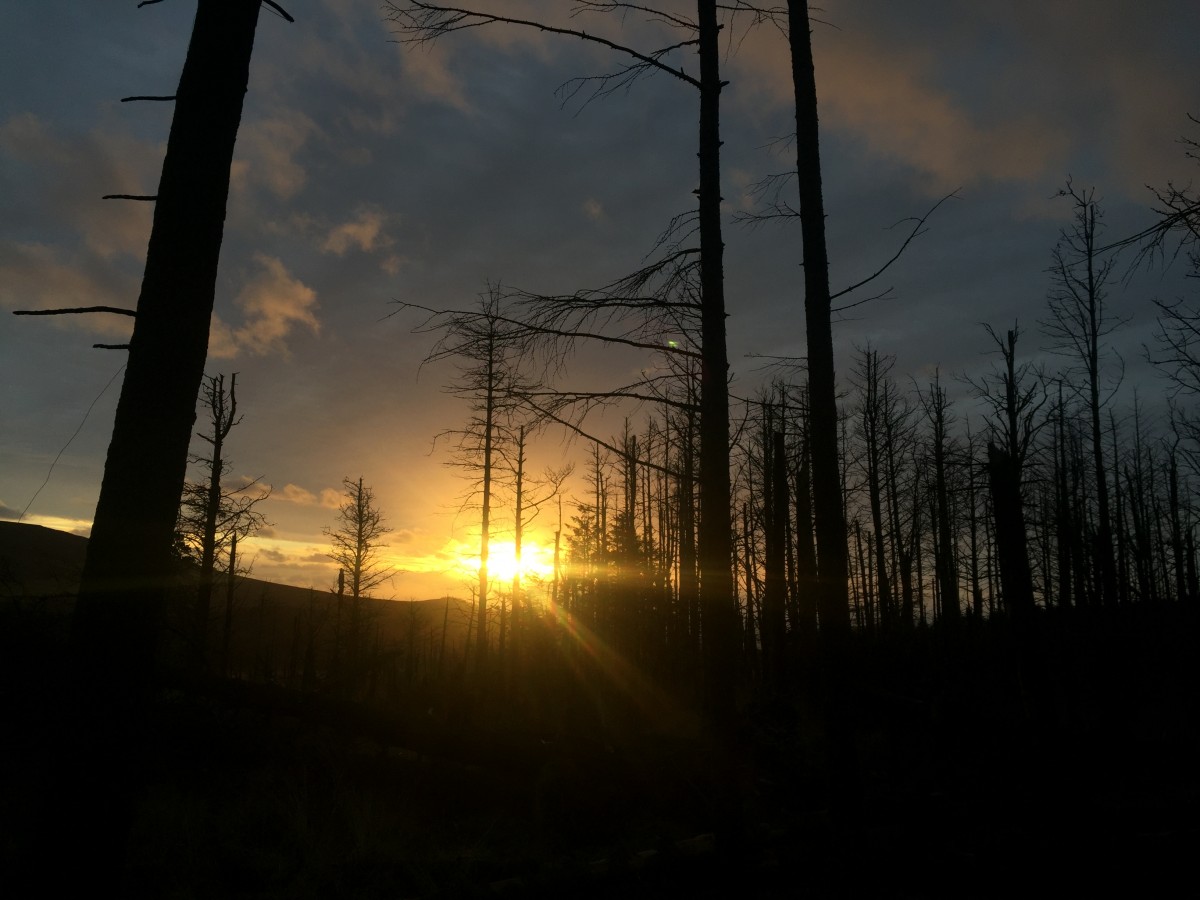 The pine trees swayed in choreographed unison, dancing to their own swishing soundtrack, driven by the invisible conductor of the breeze hitting the far edge of the forest. The occasional groan and creak came from less able members of the tall congregation, as if complaining about not being able to keep time with their neighbours. Apart from that, the forest was quiet on this cold winter’s night, or morning, given that’s what it had become a while ago, although daylight was some hours away yet.
I was on the verge of slipping back to sleep, after having awoken cold to find my head out of the sleeping bag hood, and the pillow I’d fashioned from my jacket lying on the floor of the tent. 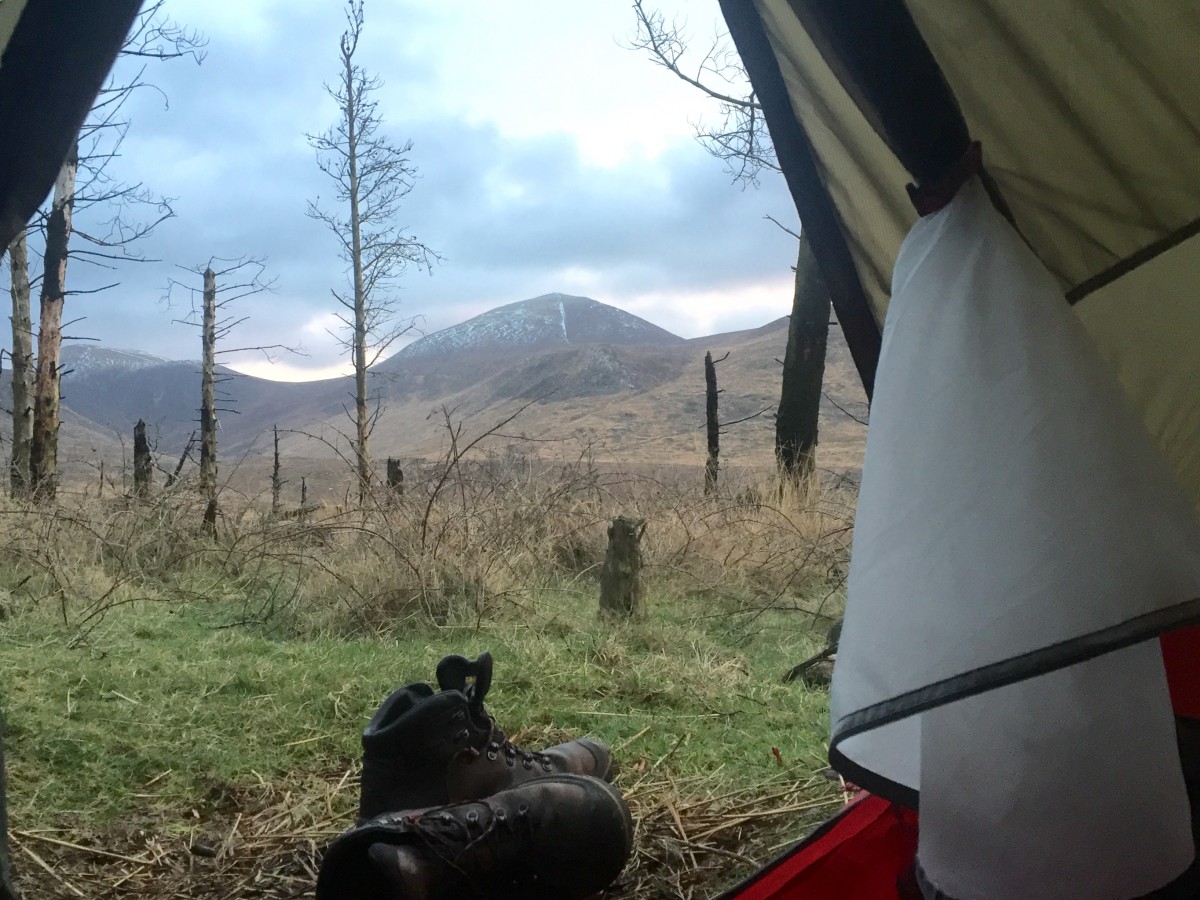 Ensconced again in the warm sleeping bag after some cold manoeuvres to retrieve it and get comfy again, I settled down for another few hours rest.
Suddenly the night air was rent by a piercing shriek, and my eyes snapped open, startled by the new noise. From further up the valley came a fainter answering call. Another similar yelp followed shortly, then a series of sharp barks of a different pitch.

‘Fox’ I told myself, and cocked my ear to see if I could hear it paying a visit to my camp.  Lying in the tent it was hard to tell how close it was to me, but then I heard it call again, slightly further away this time, and again the answering call. They faded off into the night, leaving only the wind in the trees, and I settled down again and before long the pines sang me back to sleep. 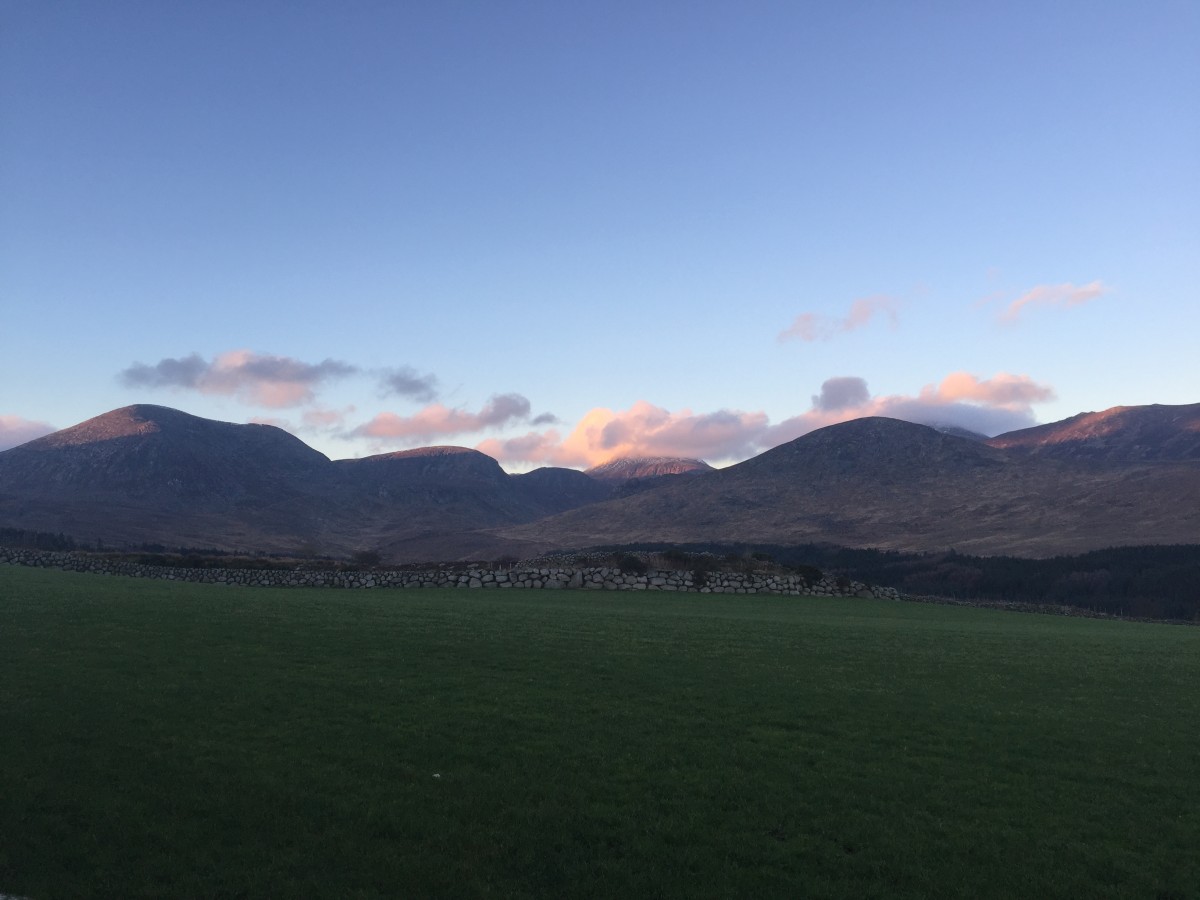 I was pitched up in Annalong wood, on my first solo camp. Now I’ve had many days solo walking in the mountains, and camped countless times, small groups and large, summits and forests, but always with some company, I’d never camped on my own.
A solo camp had been on my radar for a long time, and when the opportunity arose to get out by myself, I jumped at the chance.
A Sunday night camp was my chosen evening, the thought of waking up in the mountains on a Monday morning was too much to resist!
I threw a few essentials in a rucksack, including the MSR Hubba Hubba tent, which was getting it’s first outing. Approaching the mountains, there were still a fair few cars around the usual parking spots, the mountains must have been busy today, the good weather bringing Sunday crowds, a steady stream of hikers checking out from the mountains, heading home, leaving them to me. Parking at the excellent carpark at carrick plant (£5 per night), I gathered up my kit. It was then that I realised I’d forgotten the gas for the stove! I had intended to camp further up the Annalong valley, but changed my pitch to Annalong wood, so I could light a fire to cook my dinner! 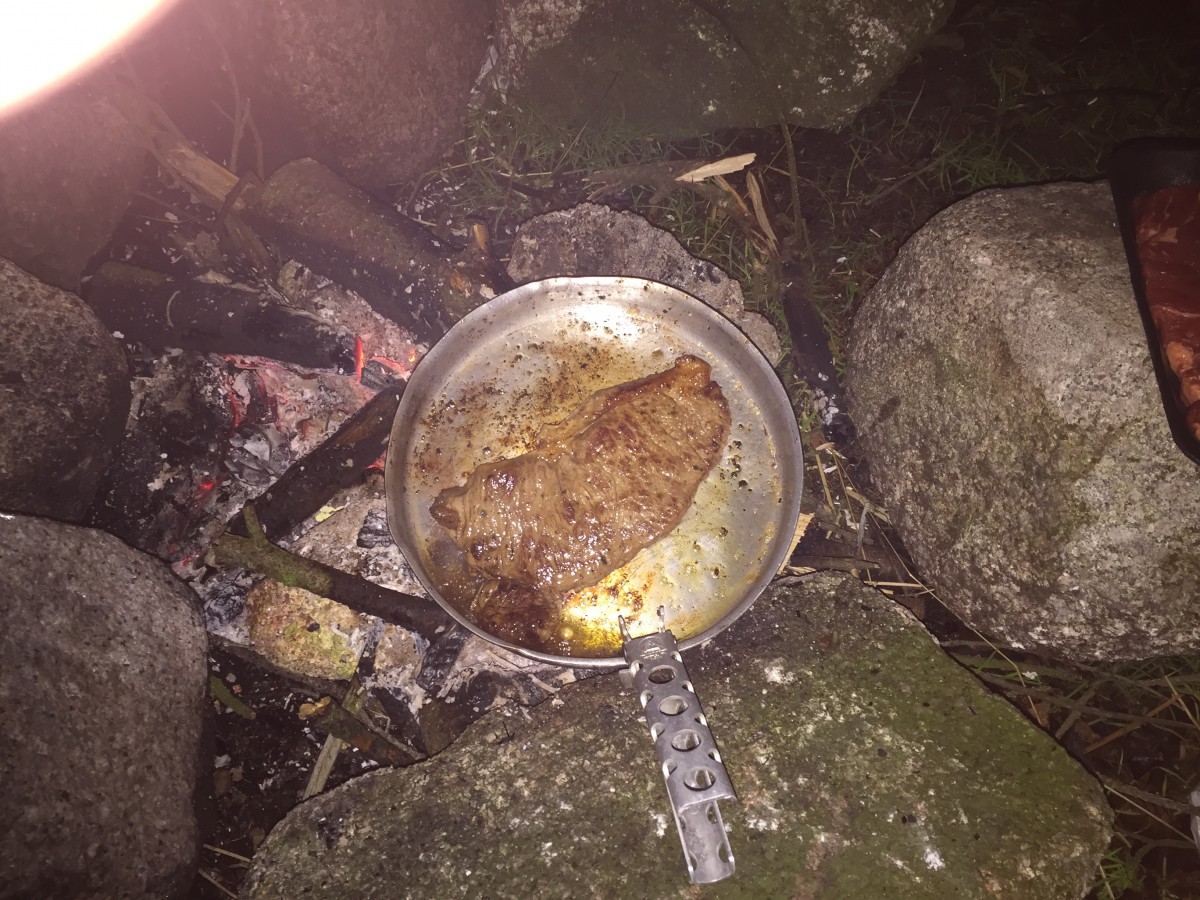 A group of hikers were shedding layers of waterproofs at their cars and kicking off muddy boots. I waved over, unfortunately waterproofs weren’t the only thing they were shedding, and I received an unfortunate side on view of a stranger removing his underpants! Not the view I’d come to the mountains for! I swung the rucksack on, and headed off.
The sun was going down burnished gold behind Binnian, leaving a mostly blue sky, and  it was one of those evenings where you knew it was going to be a cold night. The odd wisp of cloud trailed over the higher peaks, resembling the windblown remnants of fleece left by the sheep on the barbed wire fence that skirts the carrick little track.
A short pleasant walk saw me at my pitch for the night, a clearing looking up the valley towards Donard and Commedagh, their shoulders flecked with the dandruff from snowfall over the past couple of days.  The new tent was a breeze to put up, and my bed for the night was soon sorted. 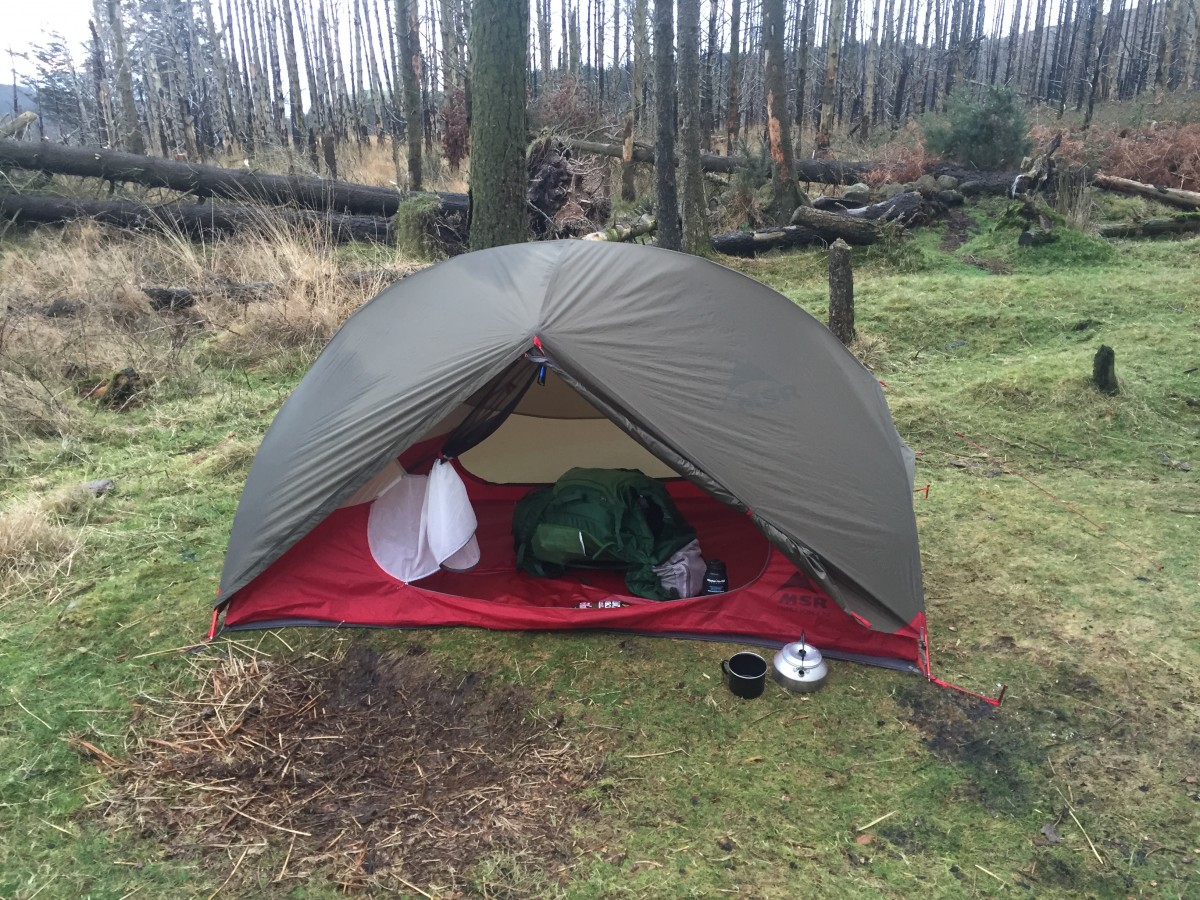 I gathered some deadfall for a fire, and collected some water for a brew. Darkness fell quickly, and the milky light from a big moon cast shadows through the trees.  I enjoyed a few peaceful hours beside my little fire, listening to music, sipping from my hip flask, and staring at the stars. I cooked up a couple of great steaks, and treated myself to an early night, turning in around ten o’clock.  Apart from the fox karaoke in the early hours, I slept pretty well, awaking just before dawn. 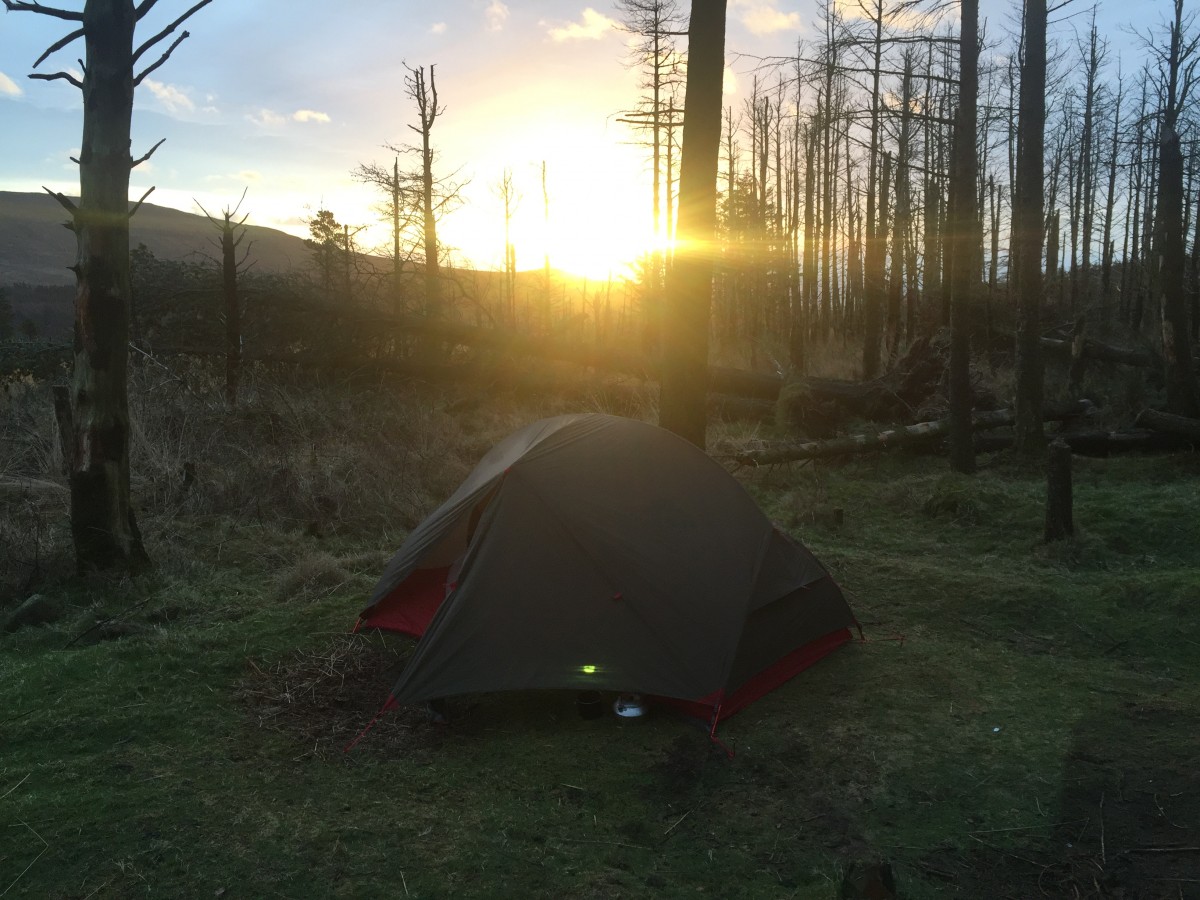 I watched the sun come up over the Irish Sea, a ball of golden fire, illuminating the land with it’s wan light, before being sucked up into the low blanket of cloud which had moved in overnight. The new tent was as easy to pack away as it had been to erect, and I was soon on my way back down the track to the car. I didn’t see a single soul all morning, and I loved the feeling of having the mountains all to myself. It’s not for everyone, but I enjoy my own company, and found the time of contemplation in the mountains an energising experience.