Home Off the beaten track

Off the beaten track

Staring in awe at the beauty of the panorama in front of us, we watched the shadows cast by the countless cotton wool balls of cloud, as they fled across the multicoloured land patchwork of Lecale, in an seemingly unending race to the coast, then onwards east across the sea, which was a deep and brilliant blue in the crisp morning sunlight.

The drone of a bumble bee and the birdsong, along with the rustle of a welcoming cooling breeze were our only soundtrack, as we watched cars and lorries glint their way along unseen roads between the towns and villages in the distance below, people going about their daily routines on a sunny Wednesday morning, but we had dallied long enough, and so it was back to the task in hand, and we turned and resumed our journey up the mountain.

Joined by John, I was on the way up Shanslieve, the deceptively steep in places outlier of Slieve Commedagh, the summit of which was our destination for today’s hike.  We had both been up Commedagh many times before, by several different routes, but I had never ascended by Shanslieve, and onwards up the ridgeline above the “Pot of Pulgarve”, an impressive, rock strewn glacial feature, but it was a route I had often thought of.  When a day in the hills presented itself, and a forecast predicting warm dry weather and light winds was thrown into the mix, I decided to give it a go.

The morning of the walk arrived, with bright sunshine and blue skies
The morning of the walk arrived, with bright sunshine and blue skies, and as I drove down my street enroute to Newcastle, the Mournes were pin sharp in front of me in the distance, always a good sign! Due to work and other commitments, John was very short on hill time, and although he was more than willing to give the route a go, he warned that we might not be setting a record pace.  I was happy just to be out enjoying the hills, and advised him there was no hurry.  We had loads of time to complete our hike, and we could stop wherever we pleased to catch our breath, while enjoying the aforementioned views of our stunning countryside.  So we parked the car in Donard carpark, and made our way up through the forest, passing morning dog walkers, joggers, and a pair of mums pushing kids in prams, strolling along as they chatted happily in the sunshine.  We were soon on our own as we climbed, the darkness of the woods intercepted by brilliant bolts of sunlight, dappling the rootbound track ahead of us, the crisp smell of the pines, interspersed with the heavy odour of damp soil and leaf litter. As we approached a track which would take us out of the forest, a large school group on an outing passed, the busy chatter and laughter of the small children, as they marched through in double file, temporarily took over from the sounds of nature, before fading behind us as we walked on. 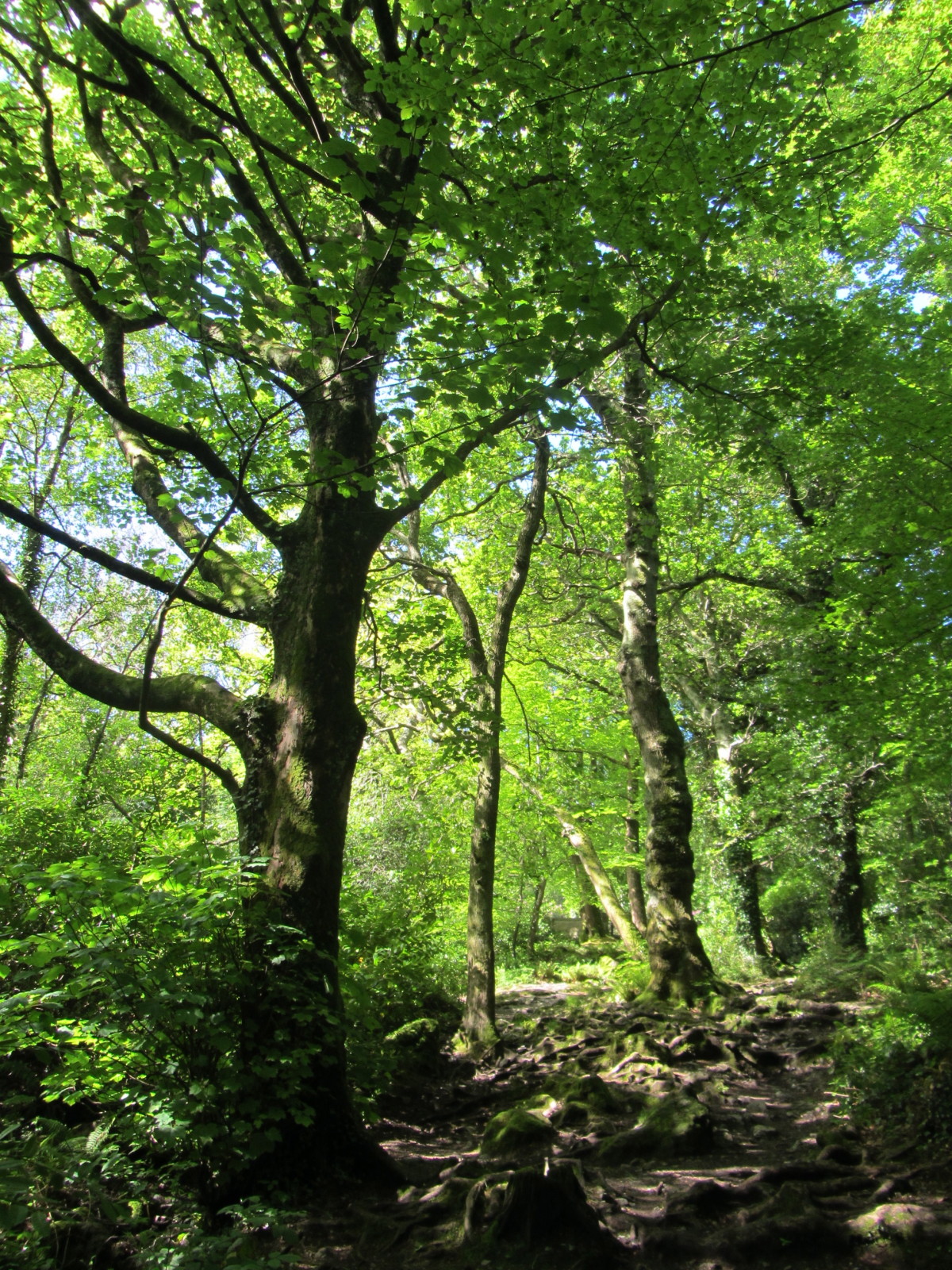 We made our way over towards Drinahilly, the large mast on its summit keeping a constant watch over Newcastle below. This was all new ground for me, I had never explored this area before, and as always, it was great to get a new view and perspective on a well known landscape.  Then John spotted his almost customary rare wildlife sighting, this time it was a large Red Kite, perched along the track ahead of us on a small tree.

It watched us as we got nearer, before finally taking to the sky with a few beats of its massive wings, gliding off out of sight into the distance, an impressive sight to see one of these mighty birds flying free in our wild places again.  We wound our way up the lower slopes of Shanslieve, picking our way up the steepening gradient, through clumps of heather and patches of grass, as yet so far untouched by the sheep that graze this area. 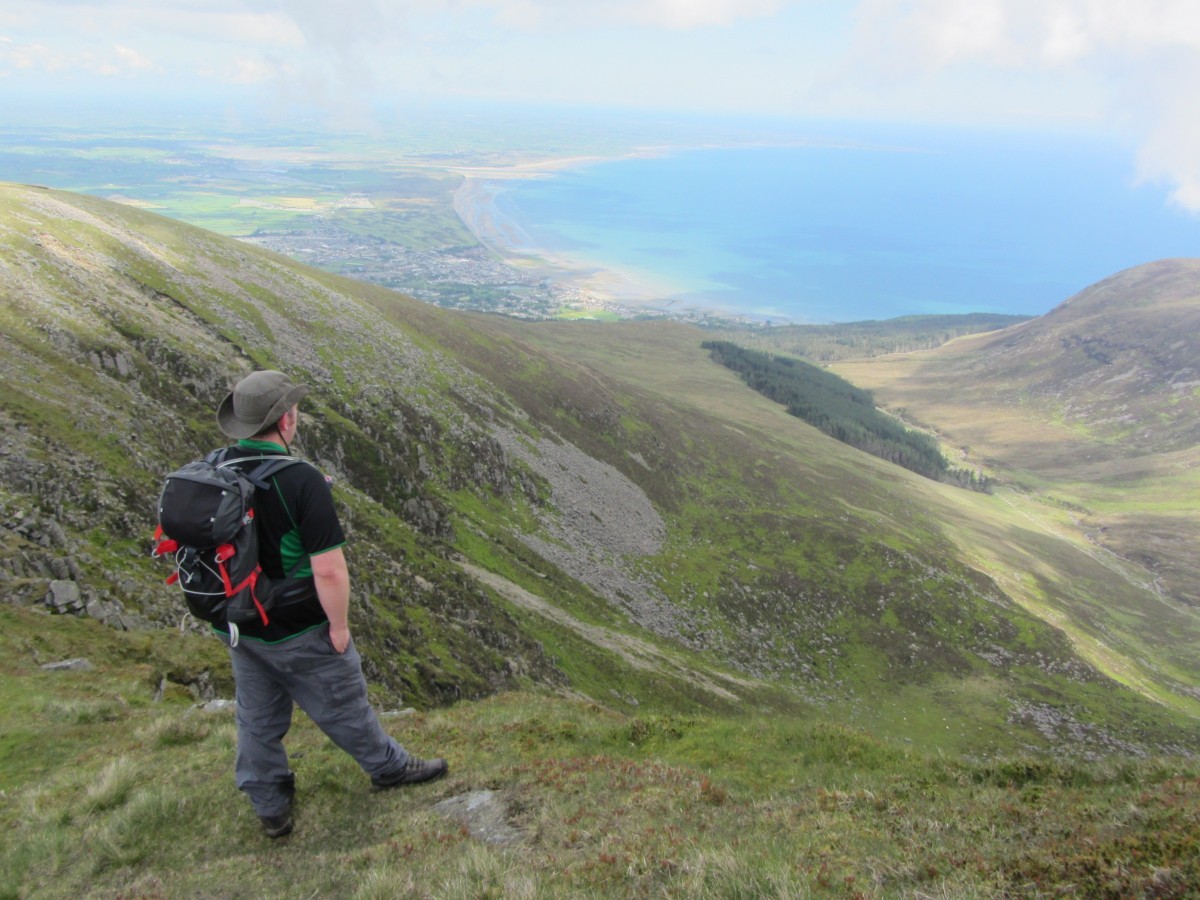 The climb up Shanslieve was reasonably steep, and the warm weather made it thirsty work, so we were glad to see the small cairn that marks its summit.  John said he had found the hike tough going in the heat, and more than once had questioned whether he was going to make it! But make it he had, and with most of our ascent over us, it was a short push up the ridgeline to make it to Commedaghs summit cairn. A thick bank of cloud was rolling from the distance, as we enjoyed reaching the summit at 767m, and again took advantage of the even more stunning views that stretched out in front of us. 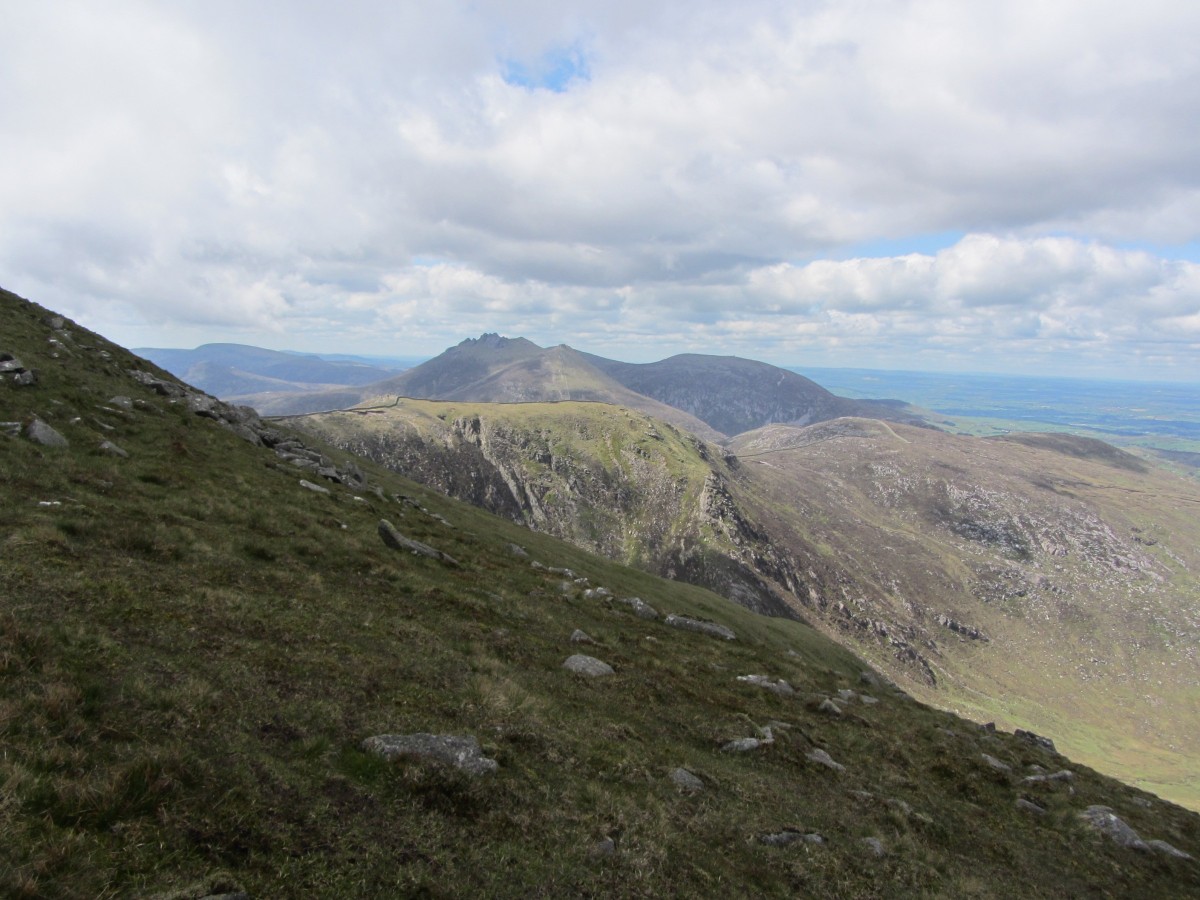 We approached the summit shelter, as we were aiming to take shelter from the fresh breeze that had been welcome to cool the heat of the ascent, but was now starting to cool us down more than was needed.  A spot of lunch was called for, and as we approached the wall, we could see scaffolding erected around the summit shelter, and men removing and repointing the large carved granite blocks which form it.  For nearly 100 years they have held firm on this lofty perch, testament to the craftsmen who placed them so expertly. But all those years facing the elements meant had they had been showing their age, so nobody could begrudge them a bit of a makeover!

We had an interesting chat with the men doing the work, and it was fascinating to watch them carefully restoring the shelter, so future generations can enjoy it.  They had just restored the shelter on Donard, and the Meelmore shelter is also to be done.  I really hope that all future visitors respect the hard work that has gone into repairing the shelters, and resist the temptation to use them as an outdoor toilet or rubbish dump!  We sat beside the wall and enjoyed our lunch, before bidding the workers farewell, and starting our descent.  We were aiming to descend again via the ridgeline, before coming off Shanslieve onto the glen river path, which would return us to the car. 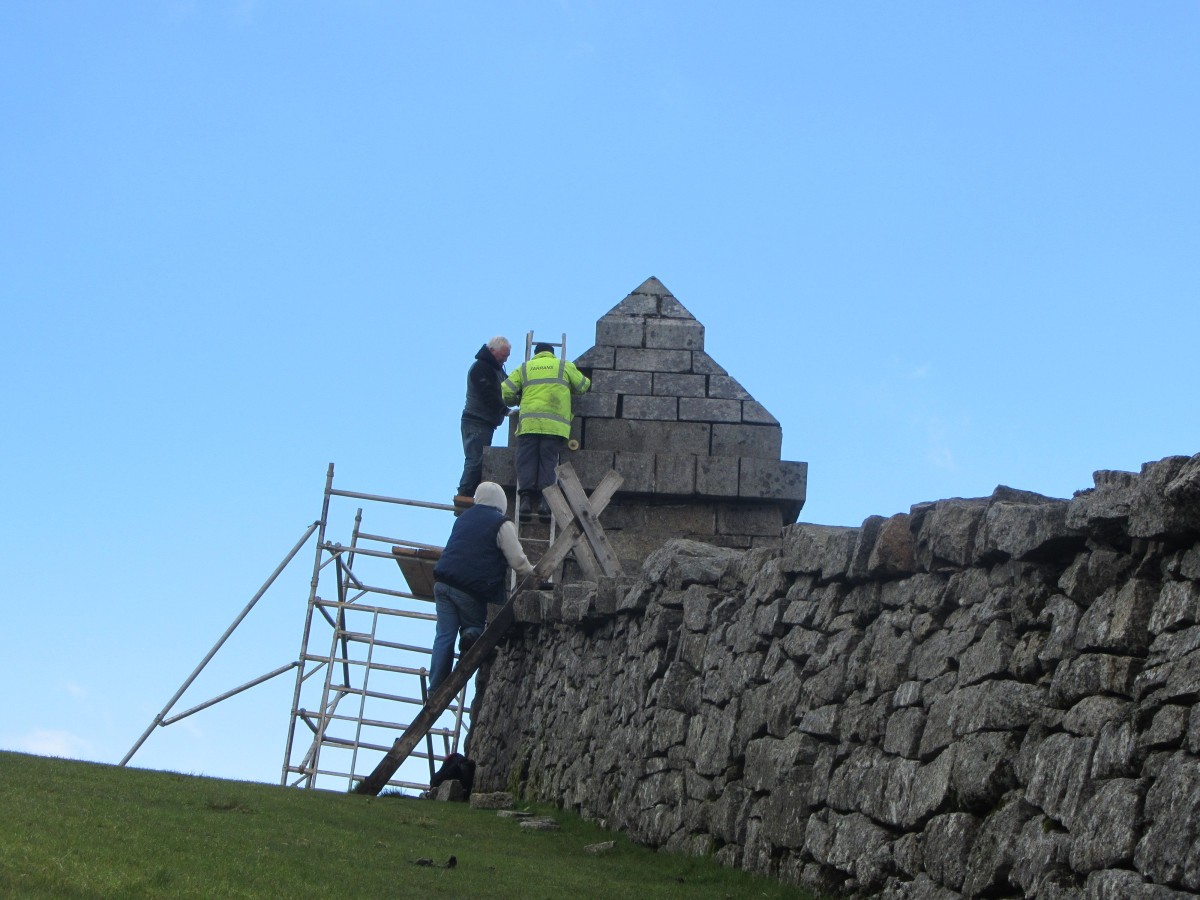 We were about 10 metres from the wall when the aforementioned cloud bank reached us, and totally obliterated any view we had, the wall and the workers vanishing, as if someone had pulled a huge grey blanket over them. We located the summit cairn, and made our way down the ridgeline.  As we descended, we came below the cloud, and once again could see that incredible view, the sky a stunning vibrant blue, and the sea below a close match for it.  The ridgeline was even better coming down, the view always in front of us, the huge bowl of the Pot of Pulgarve curving steeply to the valley floor, as if a stone eating giant had spooned a huge stony chunk from the mountain to feast on.

The school group we had passed that morning were now descending the glen river path, the high pitched laughs and excited shouts of the children filling the valley, interspersed with deeper, more urgent tones, as the accompanying adults aimed to usher their charges safely down the mountain.  We made quick progress down the hill, and soon found ourselves heading down the track, the cool waters of the glen river like a shimmering strip of burnished silver below us, as it danced its way towards the sea.  Then it was a straightforward stroll back to Newcastle, and the end of our days walking.  A new route conquered, and many more marvellous Mourne memories to add to the collection.