The reservoir filled the floor of the valley below, the water like a huge sheet of beaten metal in the grey of the morning. It lay like the blade of a vast jagged dagger, snapped off at the hilt in some long forgotten giants battle, and cast down in the shadow of the mountains. Above it lay the mighty bulk of Binnian, its crested peak dominating the landscape. Beside it I could see the steeply sloping pyramid of Lamagan, the two massive mountains framing a lovely view of blue lough, illuminated by some golden shafts of sunlight which had managed to pierce the grey in that solitary spot. Then onwards down towards the sea, where a distant lonely boat, a speck of white on the dark sea, made its way slowly along the coast. Not a bad view to open your tent door to in the morning!!

Joined by Catriona, Eamonn and John, we had camped overnight near the summit of Doan, from the Irish “Maol Chobas Fort”, standing at 594 metres, in the middle of the Mourne Mountains. This little peak is surely one of the most aptly named peaks in the range, sitting squat and silent amongst the whole sweep of the Mournes, an ancient fortification standing unceasing watch over swathes of bog and heather. You can see all of the high mountains from its rocky summit, as well as stunning views out to sea, and onwards down the Irish East Coast towards Dublin. Its location however, means that there will always be a bit of a hike to reach these views, and there are various options for this, none of them too hard, but a pack full of camping gear and supplies always adds that little bit extra!

We parked the car in Meelmore Lodge, and set off for happy valley, where our route would take us to the col between Meelmore and Meelbeg, and then onwards along the path towards Doan. The light was beginning to fade as we made our way down towards the path, and darkness fell quite quickly due to the overcast nature of the evening, so head torches were donned to aid us on our way along the path that contours below Meelbeg. As we made our way along a small track in single file, the quiet darkness was suddenly shattered as a grouse exploded out of an unseen roost to our right. We heard it whirr off unseen into the gloom, calling loudly as it went. Only Eamonn among us had encountered a grouse in the Mournes, and we were in the middle of discussing how rare a sighting this was, when there was another, then another, each greeted with deep breaths and expressions of amazement! Five grouse in all rocketed their way into the night sky, a real close encounter with some Mourne wildlife. 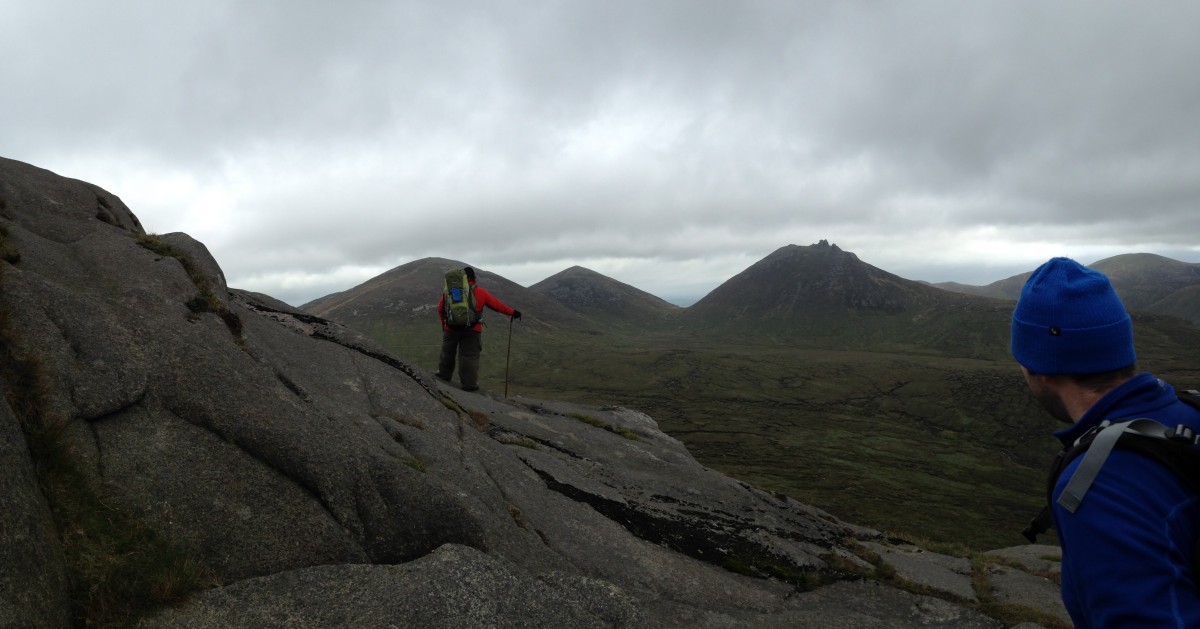 We walked along chatting, enjoying being out in the hills, and we didn’t encounter another person (or grouse) on the journey to our chosen camp for the night. Humidity fugged the air, and carrying a heavy pack meant beads of sweat were forming as quick as I could wipe them away, but the odd breeze made its way over us, helping to cool us to a certain degree, and thankfully keeping the rampant Mourne Midges at bay!! As we trekked on through the close night air, my thoughts were on the bottles of cold beer in my pack, imagining the condensation beading on the cool bottles as their icy contents slaked my well earned thirst!

The breeze picked up markedly in its gusts as we made our way up Doans gently shelving slopes, before a short scramble over some rocks up onto the summit. Eamonn had discovered a solitary tent was already pitched on Doan, we were to have company! (Or to be more accurate, the solitary camper who had probably thought he had the mountain to himself, had company!) We introduced ourselves to Michael (for that was his name) and reassured him that we weren’t serial killers, or yahoos up to spoil his night, and pitched up for the night. We fired up the BBQ, and sat down to enjoy some pulled pork burgers and ribs, washed down with the aforementioned beer, and a nice bottle of Red. We had found a sheltered spot as far from Michaels tent as we could, to avoid disturbing him too much, and chatted til the early hours, enjoying a dry but cloudy night. The cloud was at a relatively high level, so we could see the streetlights of Kilkeel glittering on the dark coast below us, the tracers of vehicle headlights making their way along far away roads. We watched a large, very brightly lit ship make its way southwards on the patch of sea that we could see between Lamagan and Binnian, burning its way through the dark sea and air around it, before passing out of sight behind the dark mass of the mountains, on its way to parts unknown. Before we knew it, the clock had hit 0330, and we made our way to our tents. 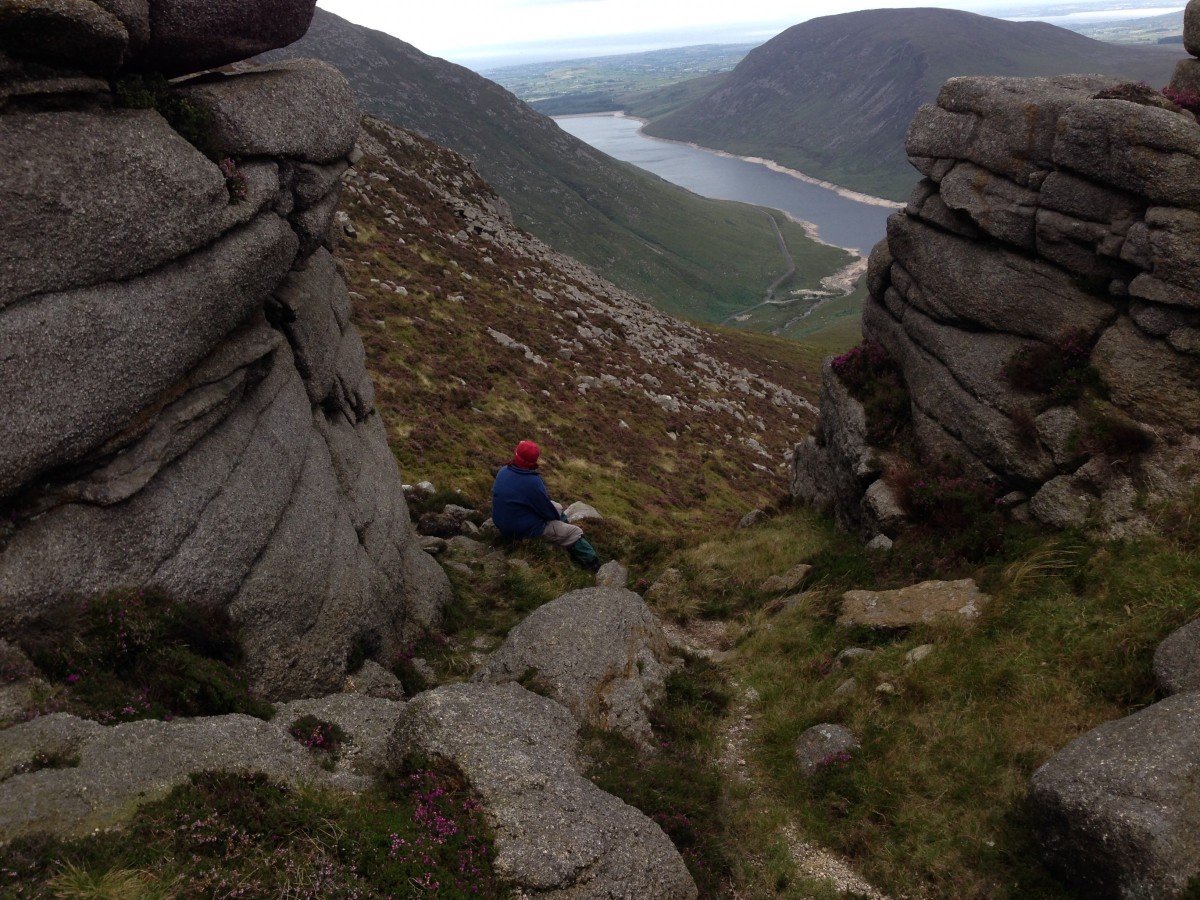 We awoke well rested the next morning, and enjoyed some sausage sandwiches cooked on the trusty Trangia, washed down with plenty of tea and coffee, and then leisurely packed up camp. We were to make our way down towards Ben Crom, where we would explore the caves and cliffs, before making our way homewards. We followed a relatively easy track down from Doan, before contouring up to follow the path up Crom, jutting out of the bog like the bow of an enormous stone ship, beached here for eternity on its way to the sea. This was one of the few peaks in the mournes that I hadnt been on yet, and it was nice to get it ticked off the list! The caves on Crom are a real hidden gem, the small path to them guarded by some fabulous granite formations, a natural gateway to the hidden void further on down the path. Exploring the caves for a while was enjoyable, speculating over who might have visited them over the years, and for what ends. My mind formed pictures of smugglers divvying up their spoils by the light of a sputtering candle on a dark windy night. Then it was a short safe scramble up a rock strewn chimney through the granite, and then onwards to Ben Crom’s cliffs. This is a truly stunning spot, and I can’t believe it has taken me this long to visit it. The broad sweep of Ben Crom Reservoir below, and its neighbour Silent Valley, and again a wonderful panorama of the inner Mournes.

We stopped for a quick snack and enjoyed the views, before making our way onwards through reasonably easy ground, between large peat hags, the black turf cracked and dried below them, forming patterns like the skin of some giant reptile. Then up a small river not named on the map under the slopes of Bearnagh, again another little hidden gem. It burbled and meandered its way down towards the reservoir below, a lovely soundtrack to our progress the opposite way. A solitary dragonfly zoomed past us in a blur, hunting for its prey. A relatively easy ascent took us to the Col between Bearnagh and Meelmore, it was all downhill from here! There was a threat of rain the whole way down, but it never materialised, and we made quick progress, hopping over a small pretty tributary of the Trassey river that runs alongside the path, and then on down below the soaring Spellack cliffs back to Meelmore Lodge and the car, another fantastic trip complete, and loads more great memories collected.
Aug 18, 2014Spud O’Hare
5 Reasons To Try BivvyingPhoto Album: Doan Summit Camp