What an absolutely amazing yet physically and mentally challenging MDS I have had. I really don’t know where to start so I thought I’d break it up into two sections. This one will cover the journey into the desert and the day and a half of admin and kit checks before I toe the start line.

First up anyone who knows me knows I am like Guinness. I don’t travel well. A overnight stop in Gatwick in the Bloc hotel and a meet up with a few of the other Irish lads over dinner was a good chance to catch up and have a yarn. Bed and an early alarm for a 06.30 meet up in the South terminal with about 400 other GB competitors. I bumped into Chris my Scottish pal and we had a touch of breakfast together. He is a great guy and like me just says it how it is.

Arrival in Quaratazate airport and transport in a convoy of buses into the desert. I didn’t manage to get a seat near the front but sat down next to a guy Dave who turned out to be my tent mate. After some serious nausea and dry boking I had to ask to sit near the front. I was green by the time we arrived at the Bivoiac 7 hours later. We had been randomly placed into a tent of eight and off we trudged in the dark to find tent 145. Once daylight popped up introductions began and a bond was formed.

It’s really well organized and food was provided all day Saturday with instructions of where to go to get your medical and ECG form checked along with your kit. Lots of last minute ‘will I won’t I’ put it in but I was pretty settled on what I had packed. My weight was 7.5kg before water.

I had all my kit handed over and sorted by early afternoon so just went a dander with tent mates Carrie and Tom to stretch the legs. Huge huge dunes were in the distance and these were the first obstacle facing us for 9km in the morning. It was going to be a sandy and very brutal day one. My game plan was to take it easy on day 1-3 and hopefully be able to have all my functions still working with no injuries. That was the plan anyway. I had promised myself I was going to be totally on the ball with my fluid/salt and food intake. All these had to be perfect or my body wouldn’t react well.

My tent mates were a great bunch of guys and girl. We only had seven in our tent. Bret, an ex rugby player living in Singapore. Derek, an ex polish policeman who lives in Ireland who also wears size 16 trainers. Nick, a Yorkshireman who is a builder and had done the MDS four years ago. Dave, I was sat next to him on the bus and he is an ex Squaddie who works in IT. Tom, an ex marine who is a PT and has rowed the Atlantic. Carrie, a Scottish lass who is the strongest person I have ever met. She has climbed Everest and then there was me. We had a really good mix of personalities and I knew it was a real good tent to have been lucky enough to fall into. 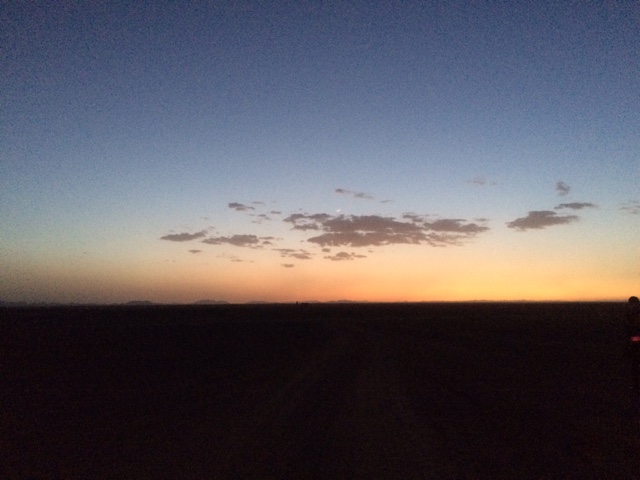 Sunset came and these are always spectacular.  I got my head down on my stony bed before what was going to be the toughest physical and mental challenge I was ever going to undertake. I was nervous, very nervous but I was determined. I had never been so determined in my life before and I am stubborn.  I was a woman on a mission. To complete Le Marathon Des Sables.

The Marathon Des Sables – My Story

This was never going to be easy, I knew it was going to take me to the limit both physically and mentally but I was ready.  I had spent hours getting wet and cold in the Mourne’s spending time on my feet.  Kit had been prepped and my food was fine-tuned. 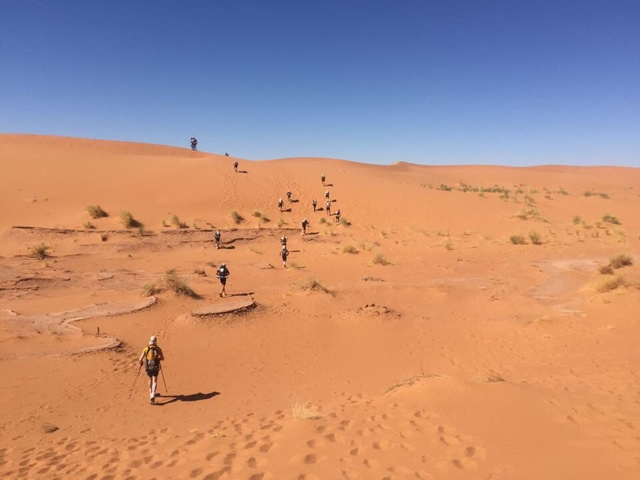 Dunes, big dunes, on day one

This was a huge dune and soft sand day according to the roadbook which I had checked out the evening previous.  Add in a huge sandstorm with of course a headwind and the scene was set.  Around me I could see people vomiting and lying down in heat distress.  The dunes were huge but I kept behind guys with big feet,I followed their footprints to take road already trod upon and hide behind their height to shelter me from the wind. Mile 18 and I was vomiting over my rucksack and T shirt because the wind blew it all back, I took two salt tablets and tried to keep the rest of the water in before I reached the finish line at the 23 mile point.  A very harsh introduction to the desert.  Then to add to difficulties after my recovery shake and dinner I vomited the entire contents of my stomach up.  Panic set in as dehydration and no food is not a good omen before day 2 and 25miles. 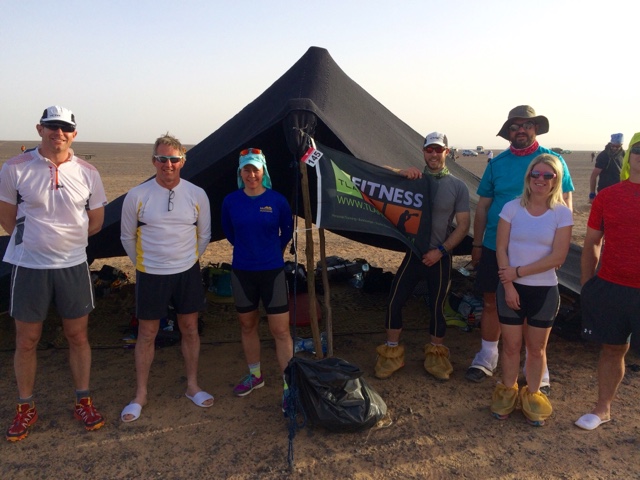 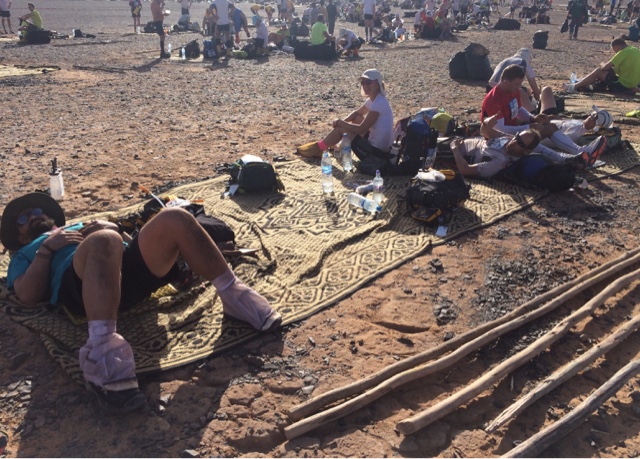 After last nights sickness I tried to eat breakfast but my appetite was gone.  Force feeding porridge while wretching is not a good start to the day.  I managed about 200kcals with water.  With very little fuel to get me through 25miles with dunes and harsh winds were making me very nervous.  My new eating regime was small and often so I tried every 20 minutes to eat a flump with two cashew nuts or equilivant.  It seemed to work but it was a force feed.  Nausea and extreme heat were killing me, I felt like a chicken in a fan assisted oven.  Soft, soft sand for most of the day was making my calves scream.  I overheated a little later in the day but stopping at the water stops, rummaging through the water bins for spare water and using that to cool me down helped.

I noticed a small blister on both small toes, I got these dressed at a checkpoint to save me doing it later that night. I managed to eat the pot noodle and water. Recovery shake was a step too far after last nights vomit.
This was a sad day because Brett and Derek pulled out because of injury and severe dehydration. Tent 145 was now 5. 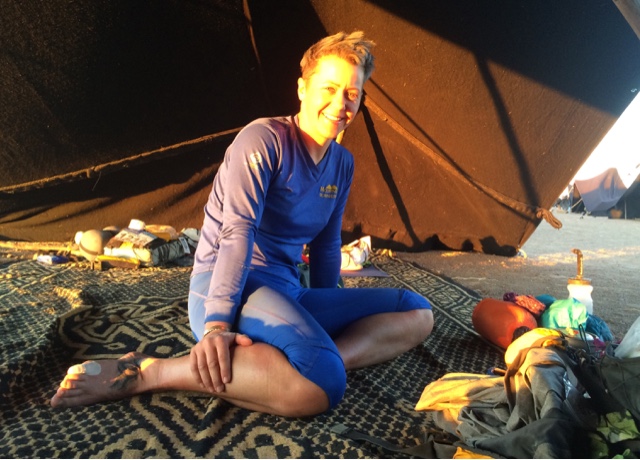 After Day Two – Glad to be in the tent

This was a day with a jebel (mountain) and I enjoyed this more. Still lots of soft sand to trudge through but it wasn’t too bad. Still cooked but I kept to eating small and often getting to the finish line and the promise of 4.5l of water and two toilet bags as a reward. 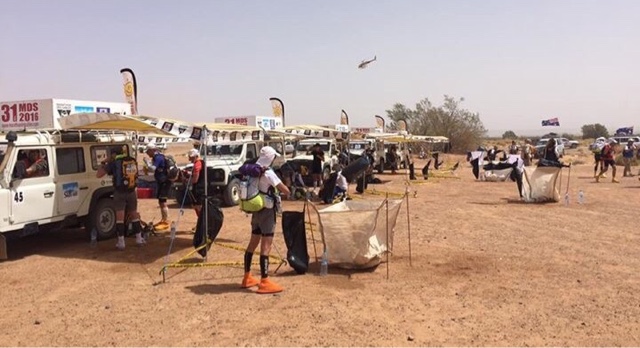 An example of a water stop

The toilet situation is strange. For No 1s you just find a spot and for No 2s you take a toilet bag, put a small stone so it doesn’t ‘blow up’ put it over the plastic toilet then once finished tie the bag and put it in the bin outside. 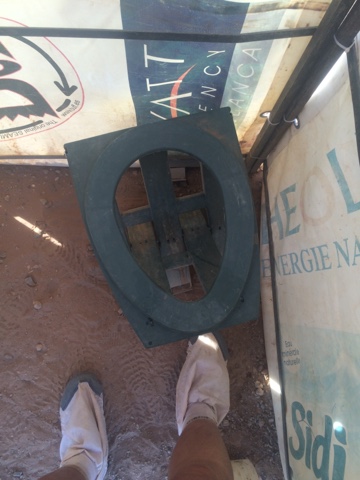 The toilet, anti bacterial hand gel at the ready

I managed to send an email home too, this was my only time I made it over as the queue was always so big. I also visited ‘doc trotters’ foot clinic as tomorrow was the long day and 52 miles of pain. 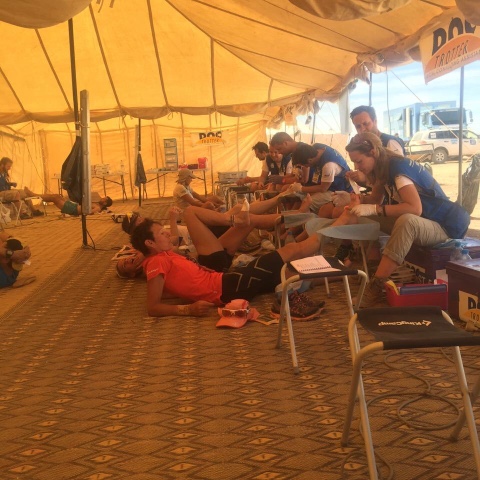 My game plan was to walk right through the night and make use of the colder evening and night to ‘keep er lit’ hopefully finishing before 24hours. The overheating after rolling sand hills made me stop at checkpoint 3 at 4pm. I met Jonny who was peeing blood, he pulled out soon after.  Soft sand was as brutal as ever but by now this was normal. I stopped at checkpoint 5 around 1.30am for a hot meal and caffine boost. Liquid calories and snacking every 20minutes was working and I came in 24hours 40minutes. 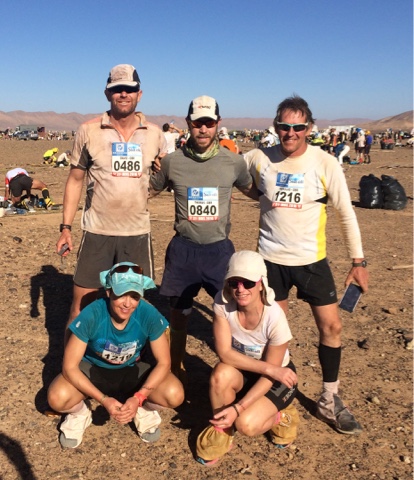 I had a wonderful night, the stars were unbelievable. Stopping and switching off my head torch to look up revealed a spectacular light show with shooting stars.  Incredible, I remember saying out loud how lucky I was to experience this race and all that goes along with it.  I cried after this stage which I think was tiredness and relief.

Tin of Coke and rest day. I spent the day sleeping and sorting my admin.  My feet needed some re-dressing which was no problem until the flies starting landing on my toes.  This was stressing me out so I used some medical slippers to stop the little nightmares. 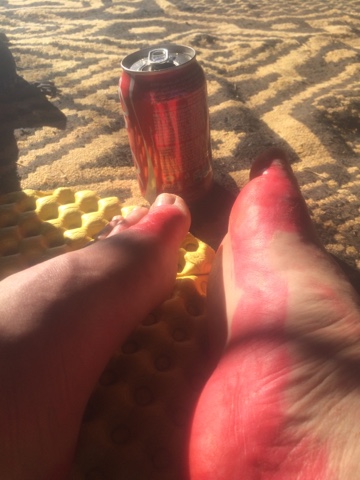 Iodine feet and a cold tin of coke 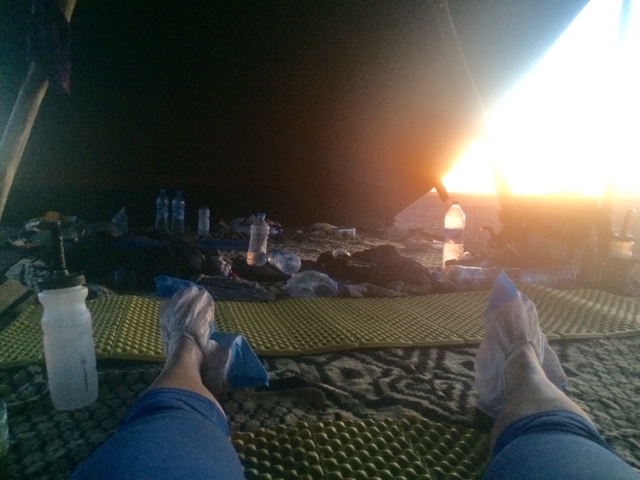 View from the tent at sunset

The camp life had settled down into a rythmn by now. Our tent were a good team and we all shared the heating of water duties.  A great help when you’re shattered and just want to climb into your sleeping bag for sleep. 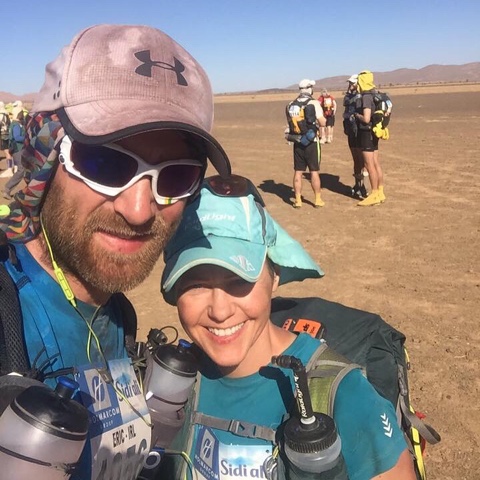 Erik and I looking rugged

Marathon day. My worst day. I had a shocker and every mile was harder and harder.  I was overheating badly and my stomach was making noises. At mile 21 I had to have a good talk to myself.  Up I got and dragged my ass to the finish.  10hours will never break a record but then that’s the MDS, it is brutal. Really brutal.
I cried when I crossed the finish line. This time I held it in til I got my water and toilet bags then cried all the way back to the tent. Relief, pain and a huge sense of achievement to have finished all competitive stages of the race. I just had 15km to go on the charity stage. 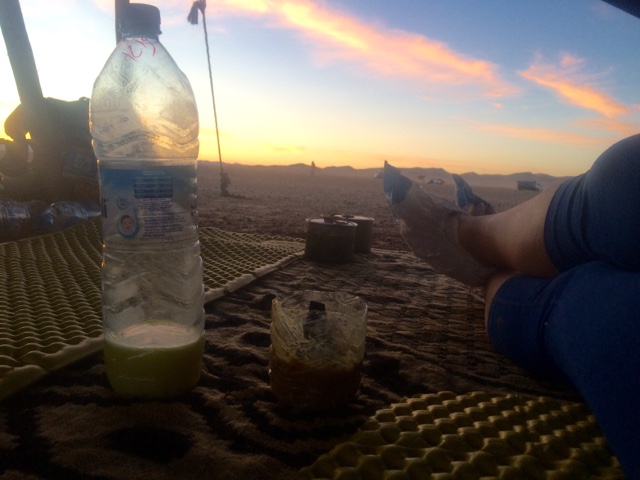 Dinner and a recovery shake, I tried to eat 400kcals at dinner, barely.

This race pushed me further mentally and physically than I have ever been before.  Sickness, diarrhoea, farting, trapped wind, loss of appetite, sand, lots of soft sand, tears and euphoria.

The charity day and a clean t shirt. Just 17km today and a walk to get the coach to normality. 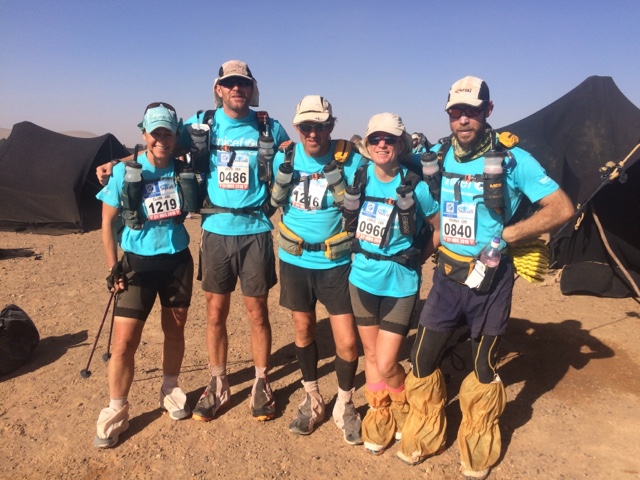 The top tent before the charity day 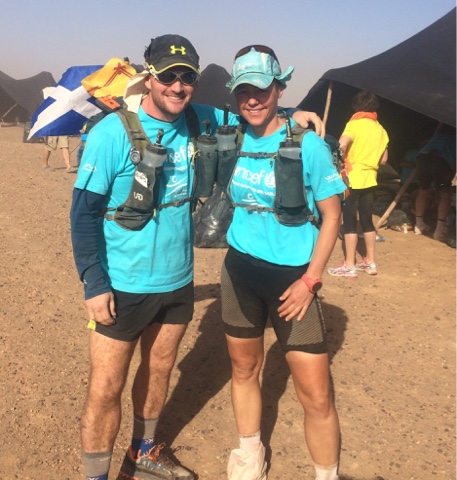 Chris my wee Scottish pal who was in the tent next to me. 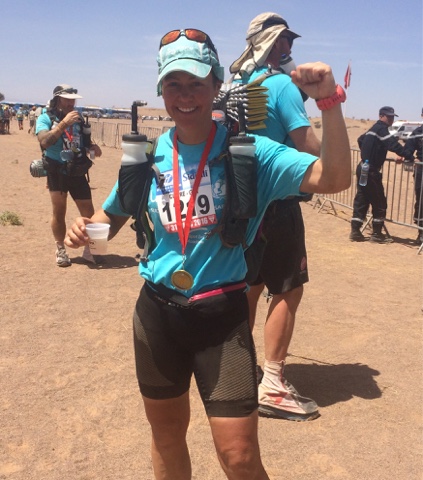 Happy, relieved and proud to get the medal 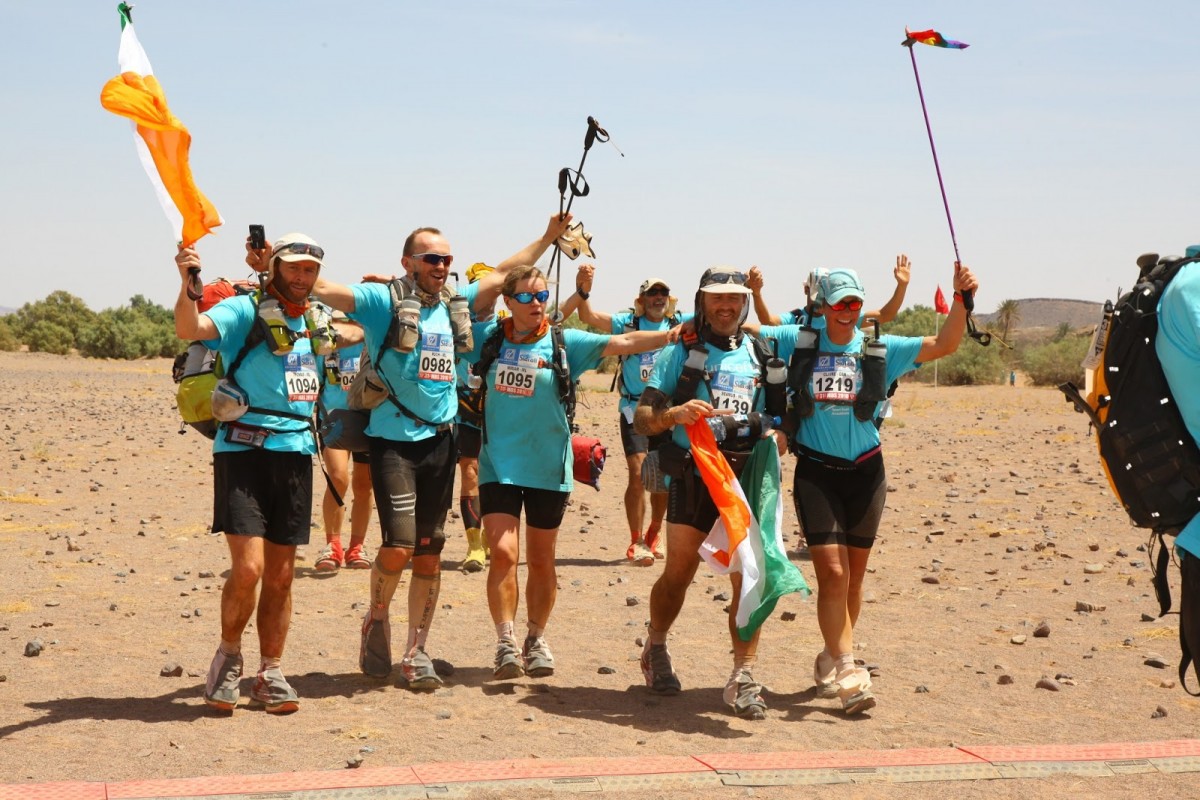 The Irish crew coming over the finish line, a great bunch of guys and girl!

The MDS is a brutal extreme and very tough race. I suffered in the heat as I knew I would but with a strict water/salt and trying to keep my core temperature regulated I got to the finish line to earn the medal. I never once took my eye off the ball, total concentration as if you forget yourself for 10minutes you pay big time. 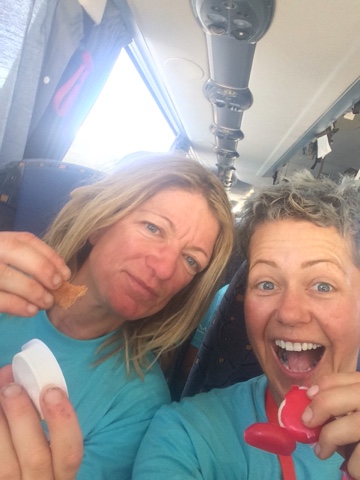 Now that i’m home I am feeling extremely tired and I have lost a fair bit of weight.  The support I received was incredible and the emails at the end of each stage were brilliant and really boosted my mood.  Thank you to everyone who took the time.
I hear the blue dot tracker game was addictive!

I’m so very proud of myself to have completed the MDS.  It’s a brutal, testing and mentally draining race that if you’re not careful will cause serious damage.

I am a stubborn and determined country girl who went to the Sahara and got the medal.

Thanks for reading x