Home A hot day on Knockshee

A hot day on Knockshee

As I lay down in the bath, I remembered Spud’s words, “death by a thousand cuts” and he was spot on! 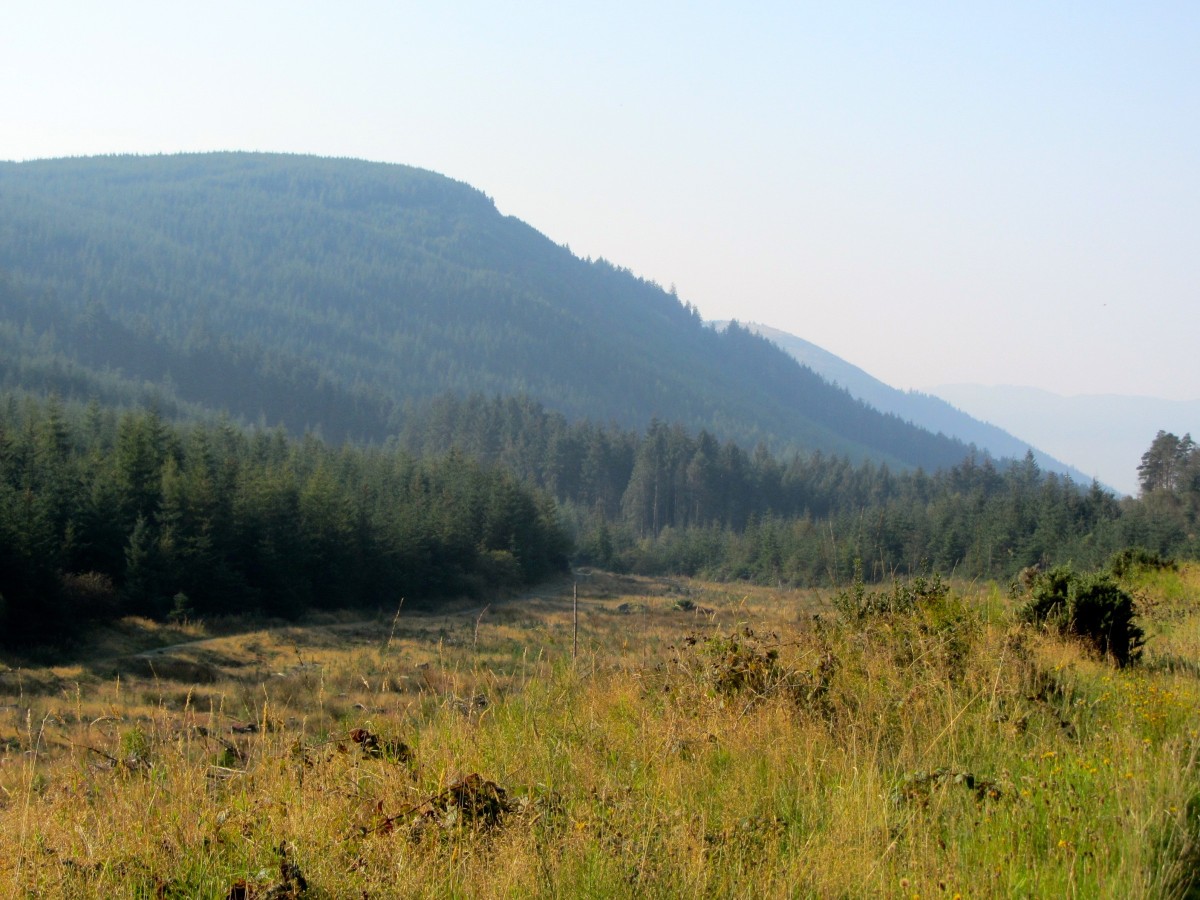 Our approach on Rostrevor.

In recent weeks the Irish September weather has been fantastic and I’ve been very fortunate that I’ve been hiking every few days! Thursday’s weather forecast gave it to be a cracker and Spud and I had plans to walk the higher ground. 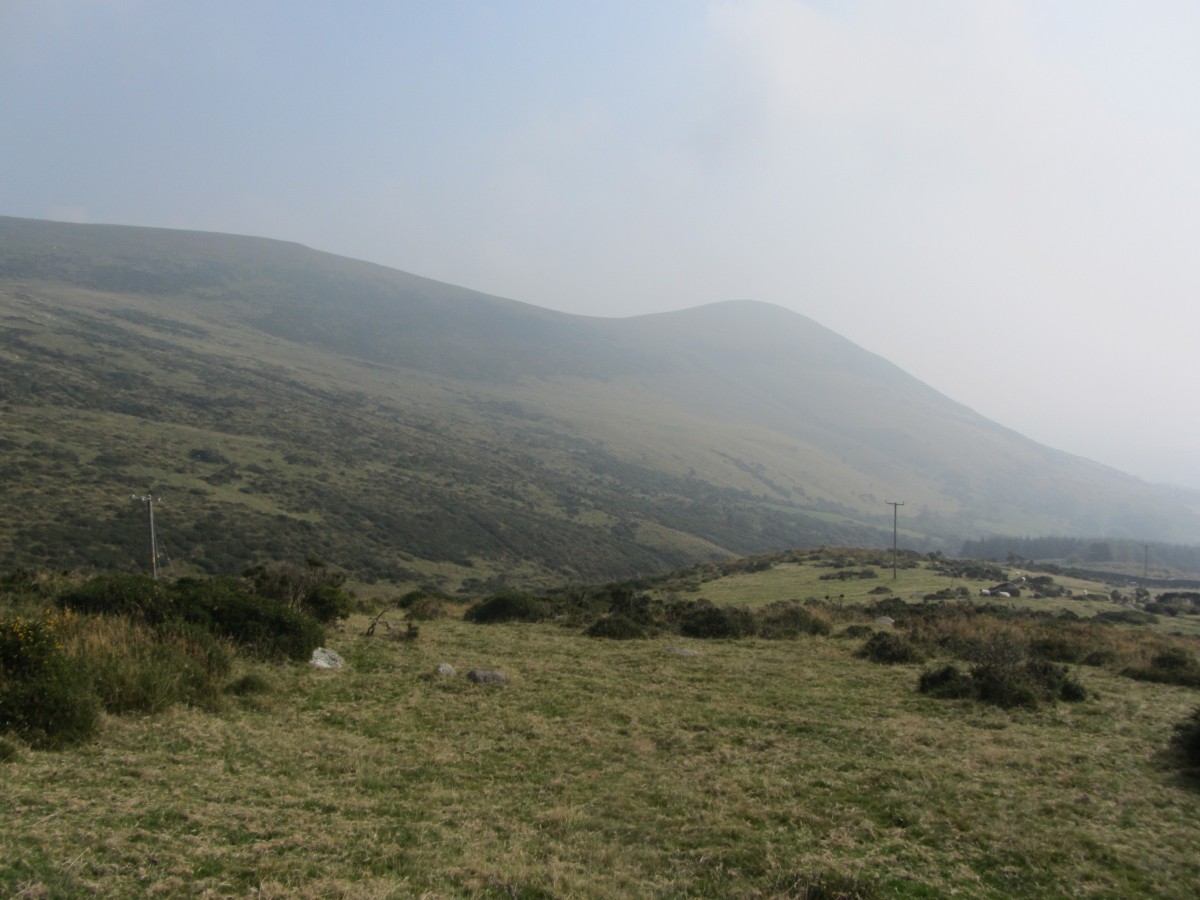 Leaving Downpatrick at around 9:30 the skies overhead were hazy, but it was already warm, it looked like we were in for a great day!
Our plan was to spend the day practicing our navigational skills using both the Harvey and the Ordnance Survey Mourne maps. We had chosen Ballyedmond wood, just outside of Rostrevor as a starting point. Our approach to Rostrevor was along the Sandbank road, which passes Santa’s cottage, a true delight if you’re still young enough to believe, and even if you aren’t!
As we passed Leitrim lodge a buzzard sailed over the car, disappearing into the pine forest beyond, it felt like an omen that we would have a memorable day in the hills. If you’ve never been in the area of Rostrevor before, you are missing an enchanting costal haven with areas such as “The Fairy Glen” and the Cloughmore Stone, which is perched overlooking the town. We stopped off at Kilbroney Park to look over the maps and get our boots on. All around us the park was buzzing with people, from people hiring bikes to race down the purpose built trails, to folk like us getting ready to go hiking. It seemed strange to me that the weather was so good, all around us people were taking advantage of it and it felt like summer had plenty of fight left in it.
Having set our intended route we drove out of Rostrevor to Ballyedmond wood just outside the village. A small private road brought us to a forest gate where we safely parked our car. Our very first footsteps were on a steep concrete path which entered the woods, and boy was it unforgiving, within ten minutes my calf muscles were on fire! 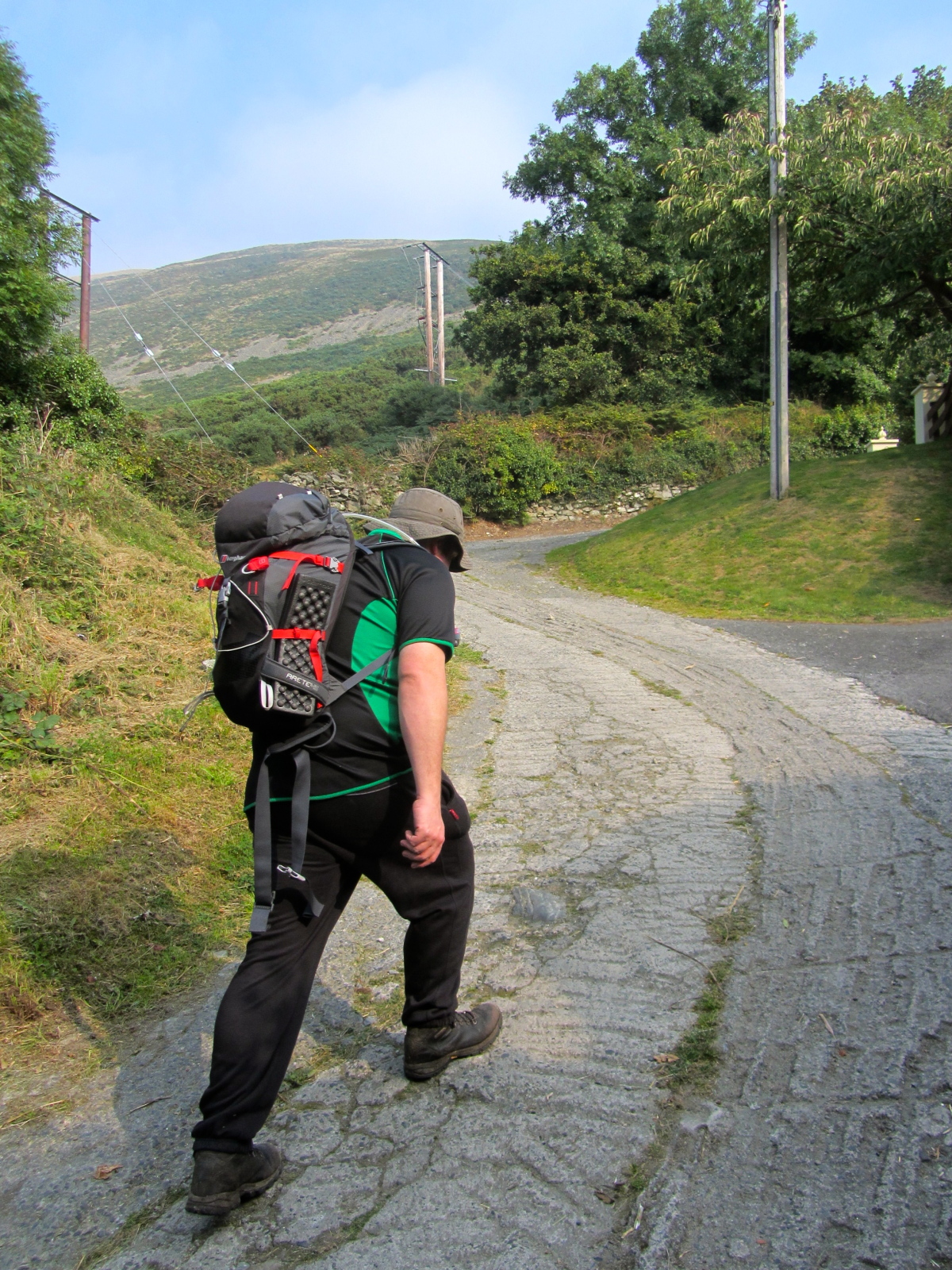 Boy this was steep

A quick map check identified our first feature of the day, as we located a stream bordering our trail. Spud walked on ahead as I photographed fungus and the creatures of the forest.
After a steep climb, we reached a set of gates on the boundary wall of the woods.
Resting in the sunlight I unzipped the lower legs of my trousers, making them into shorts, something I would later regret. 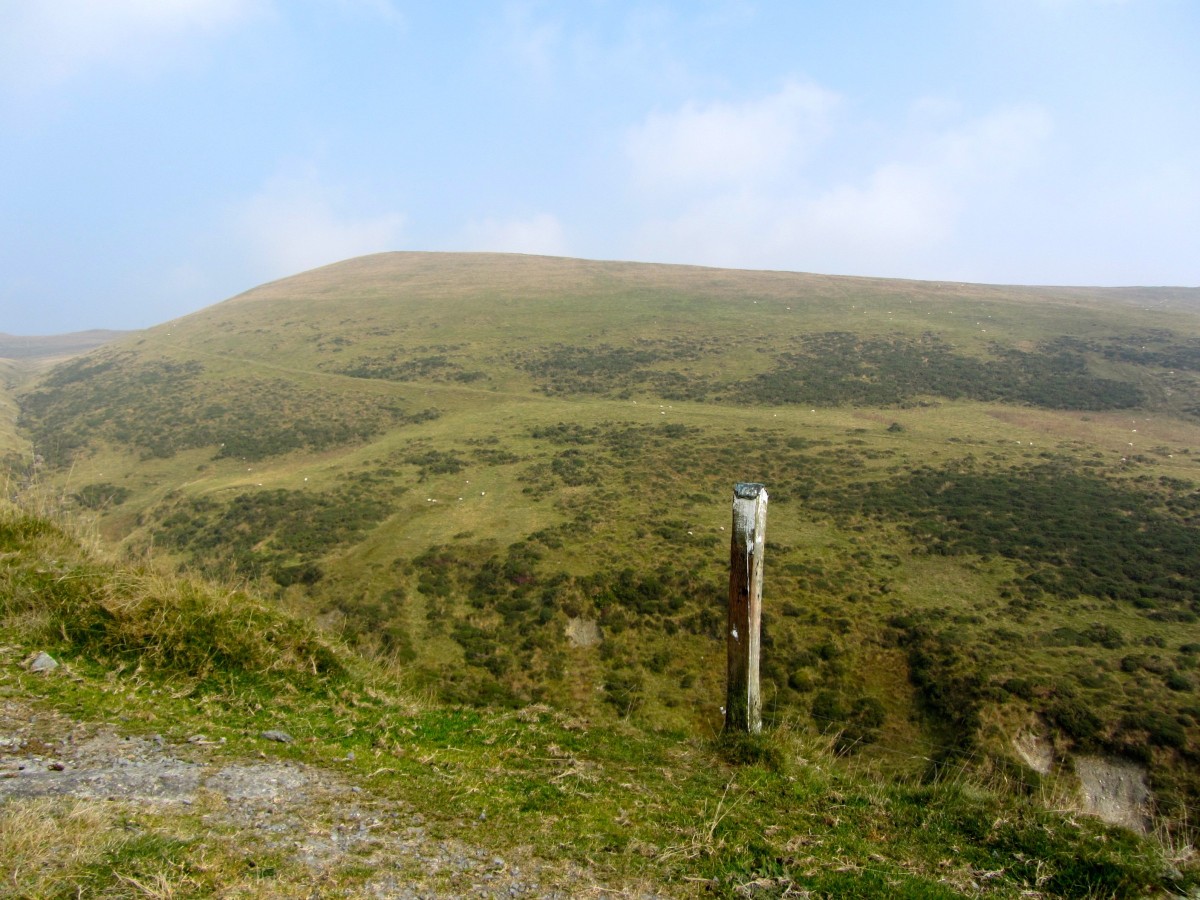 The gates led onto a good trail on the mountainside, flanked by posts that mark its progress up the hill. We talked about how useful these would be for vehicles etc following the track during periods of snowfall. Snow was the last thing on todays forecast, it was extremely hot without even a slight breeze to cool our brows, as we ascended upwards along the route. I walked a bit, rested a bit, in a cycle to keep myself going. The view out over Carlingford Lough towards the Cooleys was obscured by the haze, which also served to keep us locked in this humid environment. 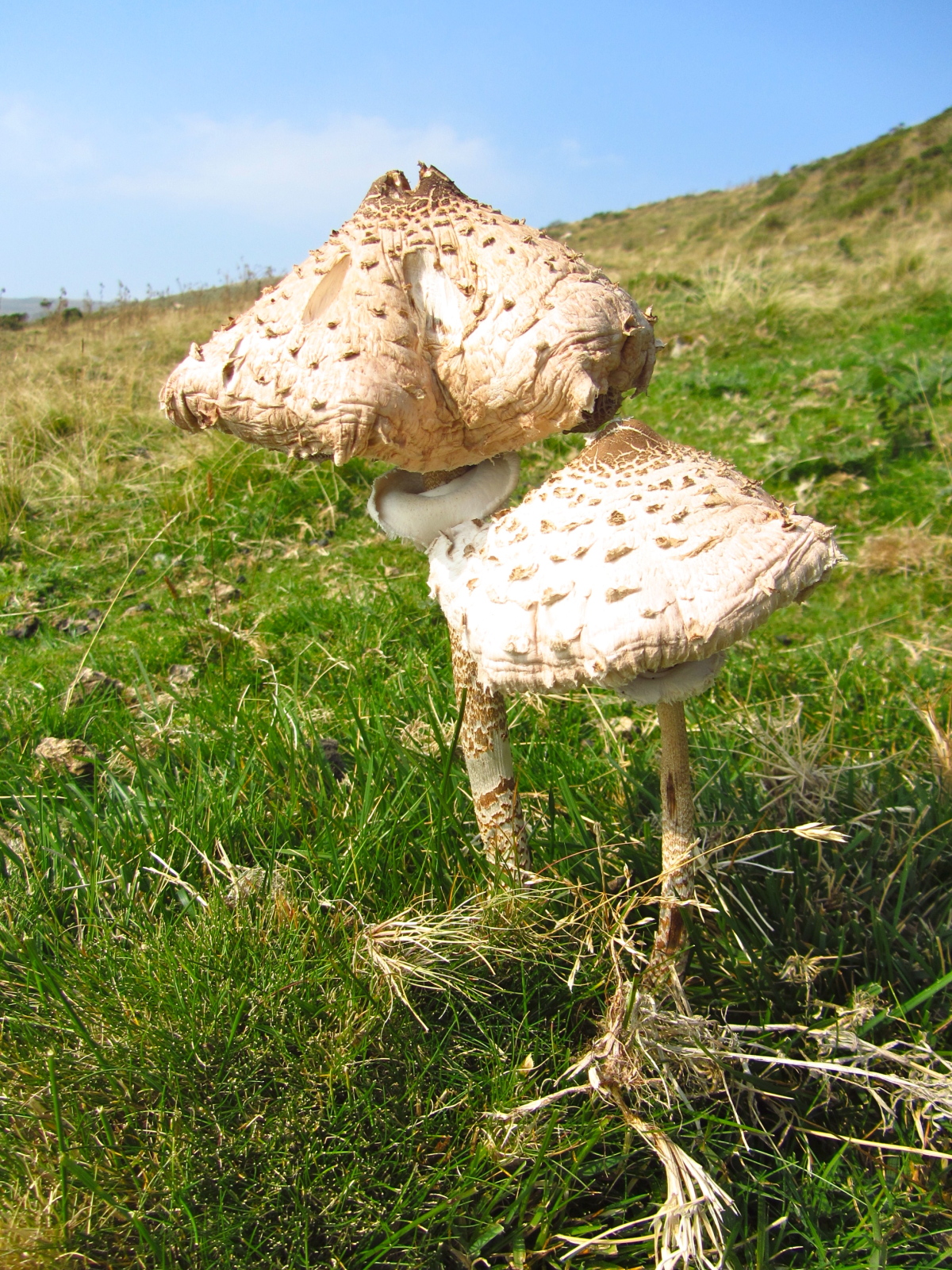 Looking across the valley, we spotted a track contouring over SlieveFadda, which I had walked over on my last day out. Crossing over a stream, we climbed up the steep bank onto another good track. Time to check the map, and we wanted to avoid the basin on the Southern slope of Knockshee.
We decided the best route onto SlieveFadda was to start gently contouring up, this would avoid us having gain all the height in one straight ascent. 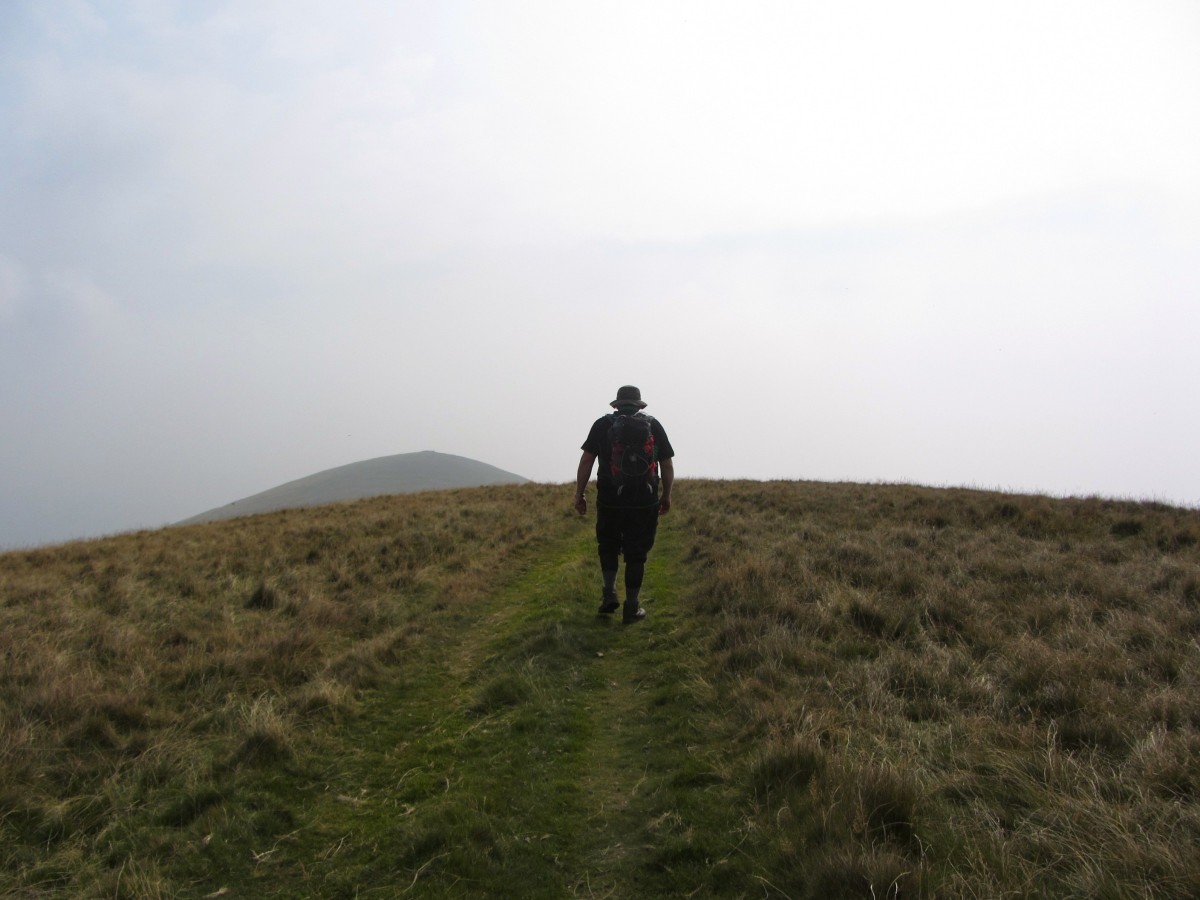 As we crested onto the brow of the mountain, a cool breeze made its way over us and we drank it in, helping to refresh us as we walked.
Earlier in the day we had viewed Knockshee from the woods, and the height gained from the col between it and SlieveFadda looked quite steep, now that we were approaching Knochshee directly, the rise to its summit cairn looked a lot more gentle.
To my left was the valley I had walked earlier in the week along the Water Gap River and the gorge towards Kilbroney.
The summit cairn is the usual small pile of stones, apart from an steel beam concreted into it. We shared the summit today with an English couple on holiday in Rostrevor, who we got chatting to mostly about the difference between Harvey and OS maps, the use of G.P.S and the usual hiking conversation. 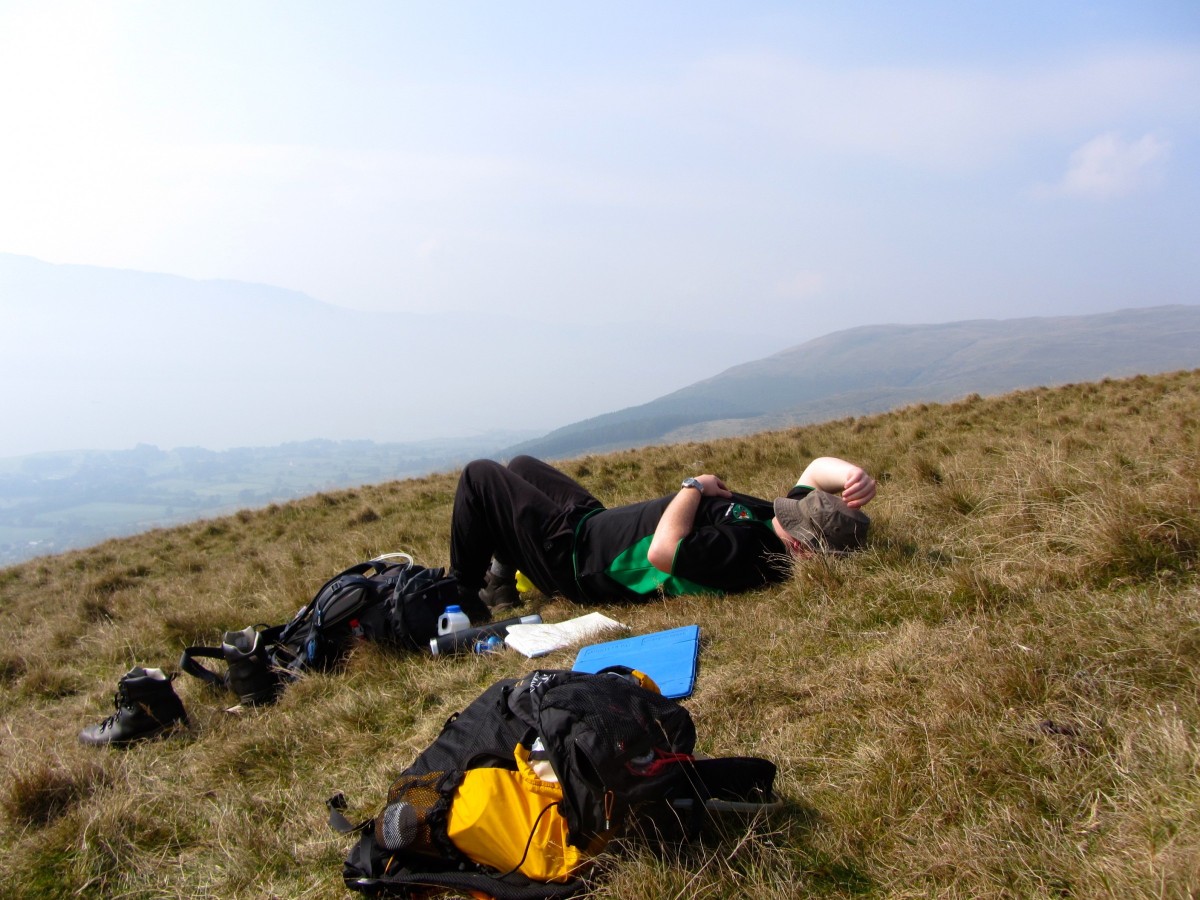 After several cups of tea we ended our lengthy lunch and planned our return route. We retraced our steps to the col between SlieveFadda but instead of continuing along the ridge, we veered southward down the steep face of Knockshee toward a river, which we wanted to cross. After a short while we encountered a large patch of gorse, or “Whins” as they’re known in these parts! 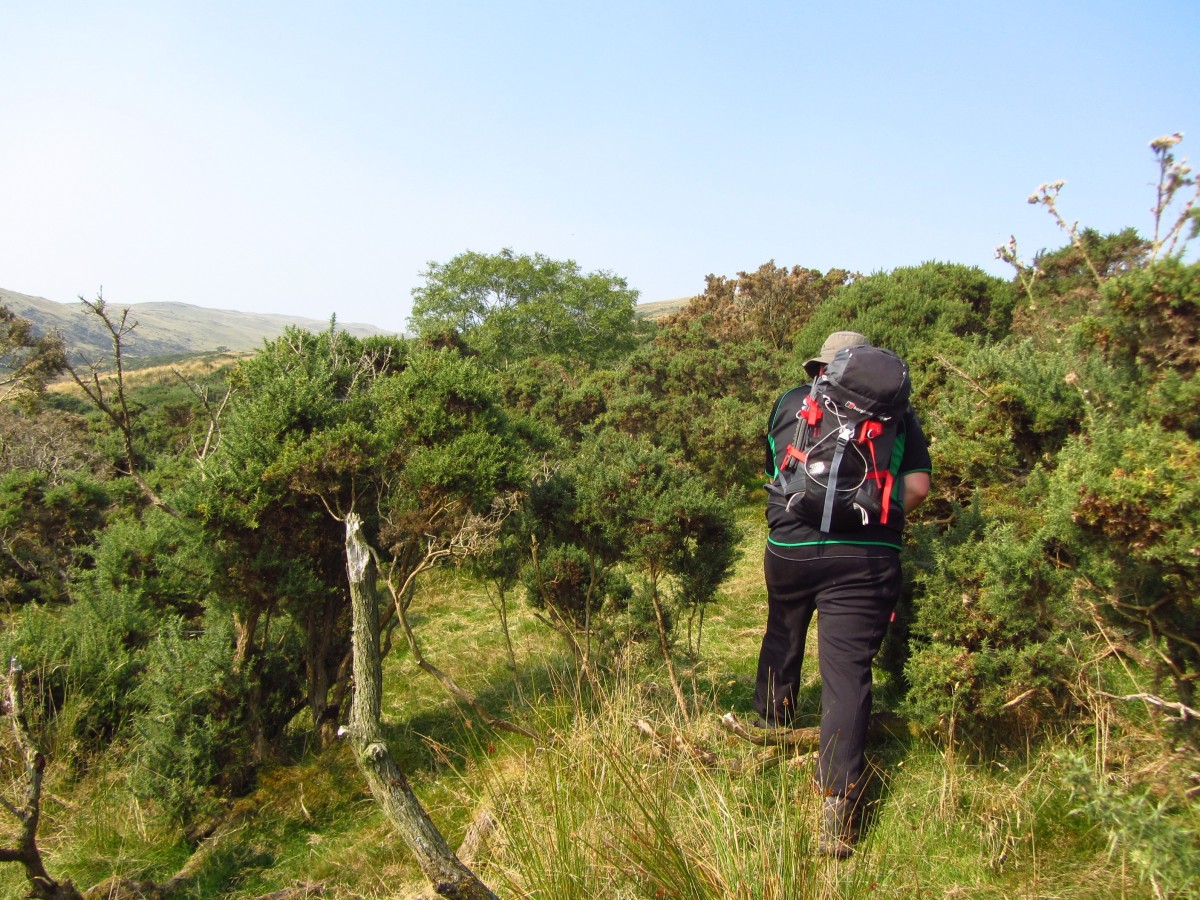 The forest of Whins

We did our best to avoid them as much as possible, but my bare shins were taking a hammering with every step! Finally we cleared them and picked our way down the valley. We reached a small stream, where we took off the shoes and socks and enjoyed the opportunity to rest our feet in the suprisingly cold water. I splashed some over my whin wounds, and felt revived again. After a while we got our socks back on and ascended upwardsalong the boundary wall on what felt like new feet! 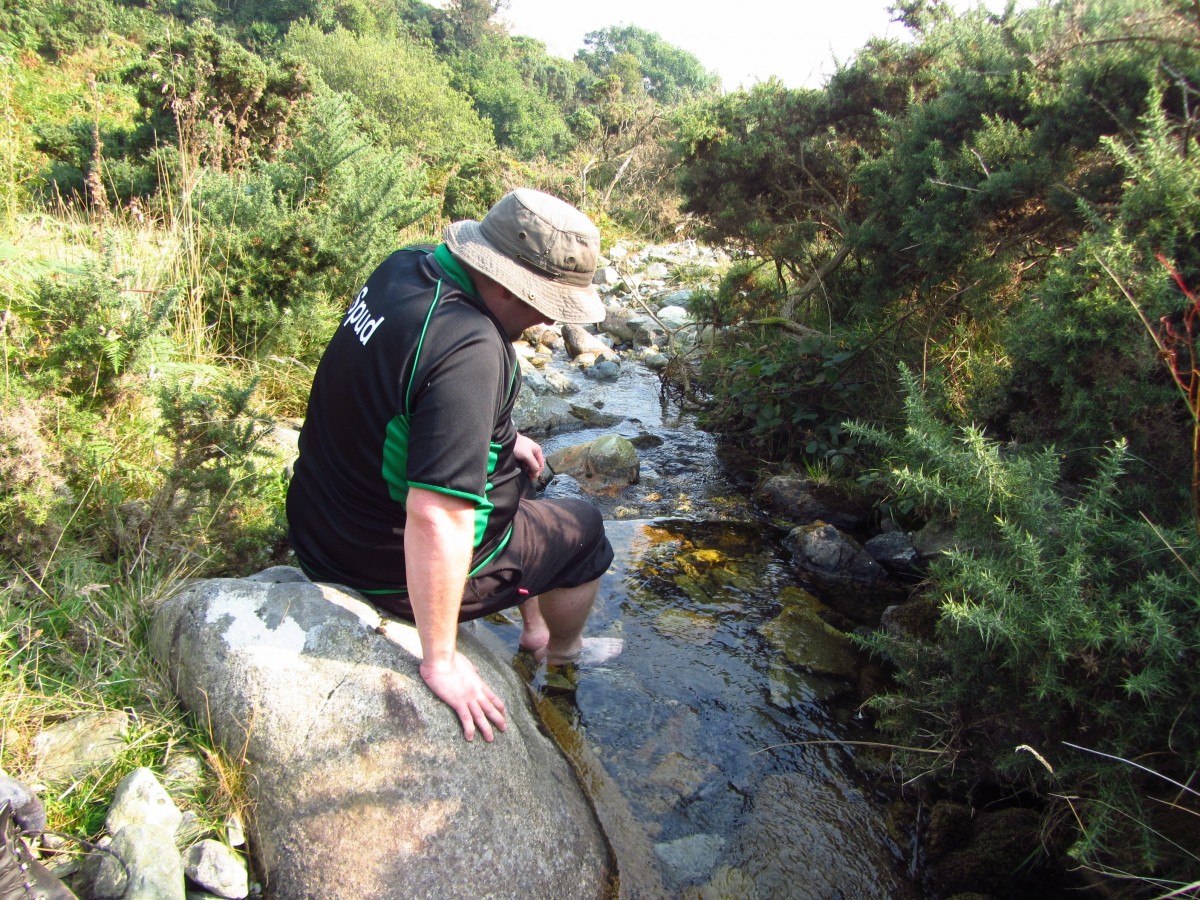 Easing our tired feet in the river.

I mentioned to Spud that I intended to take a long soak in a hot bath when I got home to which he replied,”death by a thousand cuts” and I now know what he meant, it felt like every scrape was brand new in the hot water when I got home! 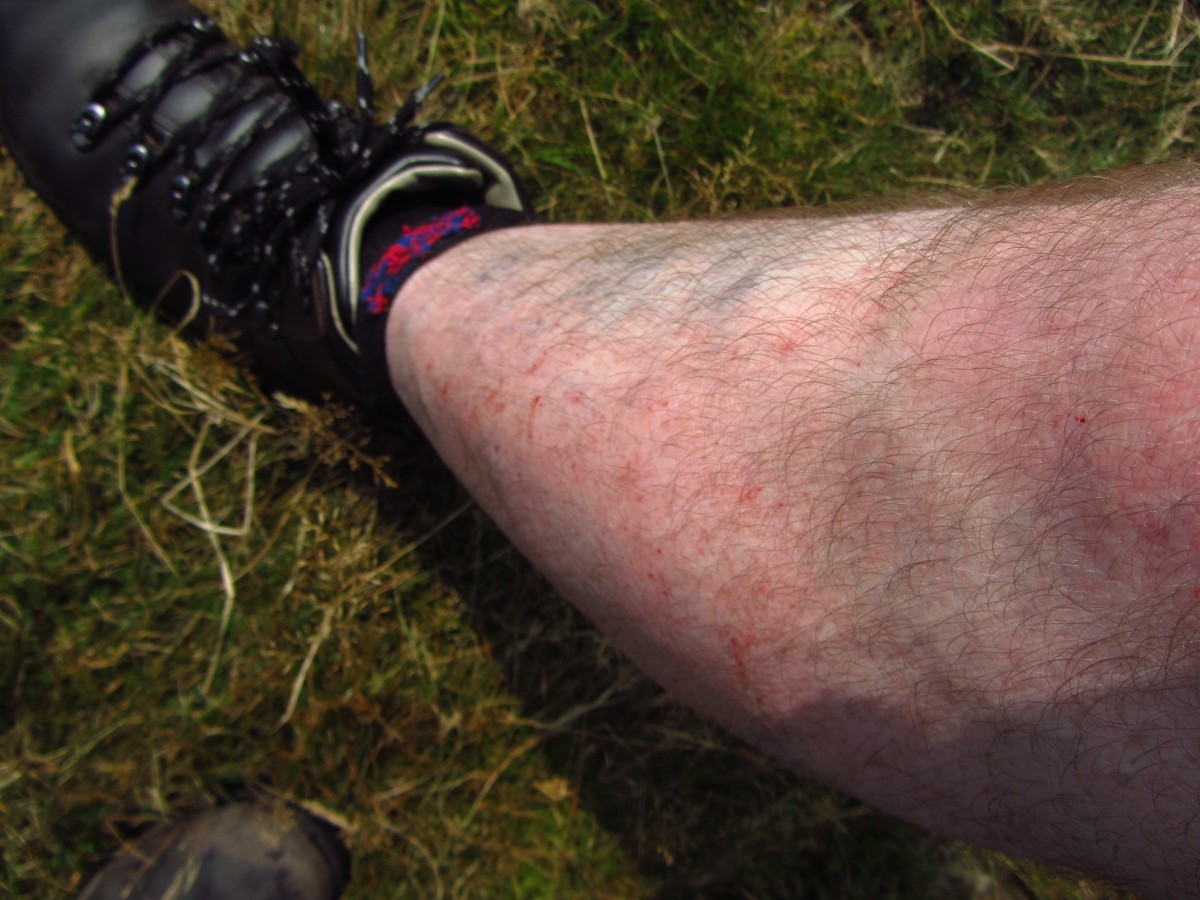 As we crossed over through the gate we had passed earlier, we felt the first coolness of the day. Descending the same woodland road, we paused to take some photographs. On our journey home we took a detour to Greencastle, a 13th century fortification, still standing silent watch over Carlingord Lough. We intended to go inside, but unfortunately it only opens on a Sunday, so we’ll save that for another day.
I had found todays walk tougher than my previous two, firstly as Spud was a proper hill walker, and second that it was one hot day to be in the mountains!
We returned home to Downpatrick somewhat more scraped and tired than we had left, but nevertheless richer for our experience. 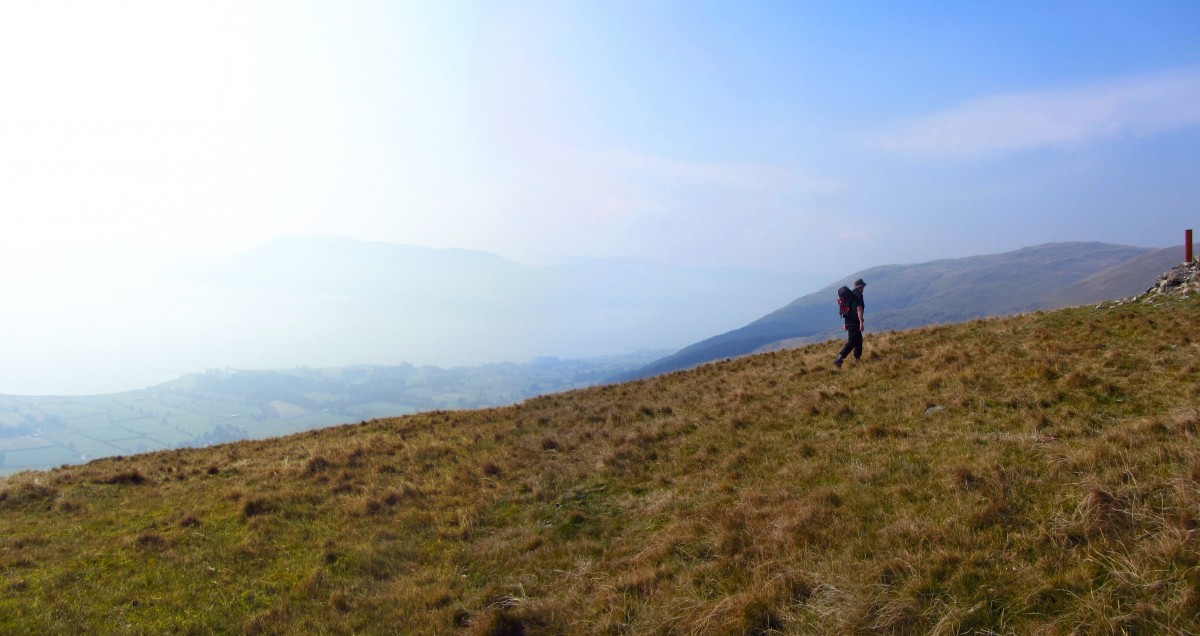 What a day to be in the mountains.