Home A Mourne Microadventure at the Ben Crom Reservoir

A Mourne Microadventure at the Ben Crom Reservoir

Having been asked to cover someone’s late shift at work on Thursday, I decided my new found freedom on Thursday morning should be used for something worthwhile. In no time at all a camp was arranged at the shelter stone at Ben Crom, with Spud, Oisin and John. The weather looked set to make a fantastic camp.

A sneak peak at later on

It’s going to be a cold one

As usual, I brought my pack to work on Wednesday morning, enjoying the usual strange glances from other commuters. It always amazes me that someone can wear a North Face Summit Series £300 coat on their stroll to work, but stare in overt disgust at someone bringing similar kit on their way to its intended use. If you have experienced this yourself let me know in the comments!

After work I met Oisin at the station and we got the bus to Newcastle, the sun setting before we were even half way to Newcastle to start our walk. I was sniffling and coughing, knowing that a cold was setting in, but didn’t want to cancel something which had came together so nicely for all of us.

We got to Herron’s in Newcastle and had our pre-walk feed of fried chicken before making for Donard Park. The initial hike up through Donard wood was challenging as I felt the familar hazy prickle in the skin, muscle weakness and general lethargy which comes with a cold. It was a beautiful, clear night however and the cold air helped begin to clear the airways. Oisin kept his hands in his pockets for most of the walk, as the bitter cold air just wouldn’t let his hands warm. 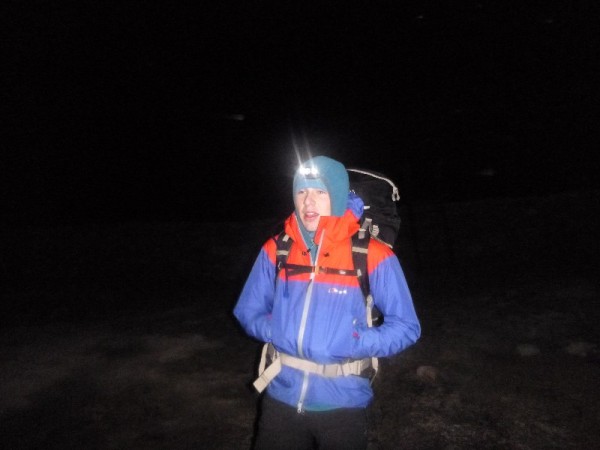 Once we reached the clearing near the ice house we were rewarded with a magnificent view of a bright moon casting a fantastic blue light over the shore in the distance, the lighthouse shot a piercing beam every few seconds.

The wind was quite fierce and contributed a definite chilling effect. There were moments during the last final push to the saddle of Donard and Commedagh where we were blown off our feet for a few steps. Oisin managed to capture this excellent still of the bright moon beaming down, with the clouds being swept past by the wind. 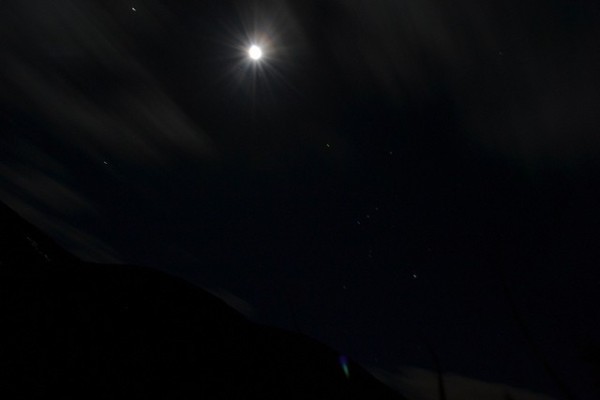 The clouds were moving fast due to high winds

Once we reached the saddle my chest had definitely cleared for the time being and Oisin’s hands were glad to be feeling less of the wind. We crossed the stile and made for the brandy pad. This part of the evening was definitely my favourite. The smooth brandy pad made easy walking in the moonlight and the occasional gust of strong wind kept the breathability up and kept the inside of your jacket dry. The views were spectacular but just couldn’t be done justice without a tripod.

It really was remarkable how starry the sky was, we even spotted a few satellites glistening in the sky. For anyone who loves stargazing the Mourne Mountains are a fantastic place to be.

We headed towards Hare’s gap, with its magnificent silhouette in our sights we then started to descend down over boggy open ground following the Kilkeel river. After more than a few slips and stumbles over snaggy heather and slippy mud we found an excellent camp site on the edge of Ben Crom reservoir, not far from the shelter stone itself. We brought out Oisin’s Force Ten 200 and began to assemble the brute, eager to get in out of the wind while waiting on John and Spud. Once inside the rollmats and sleeping bags came out (lofting is important!) and so did the abundance of ready meals: 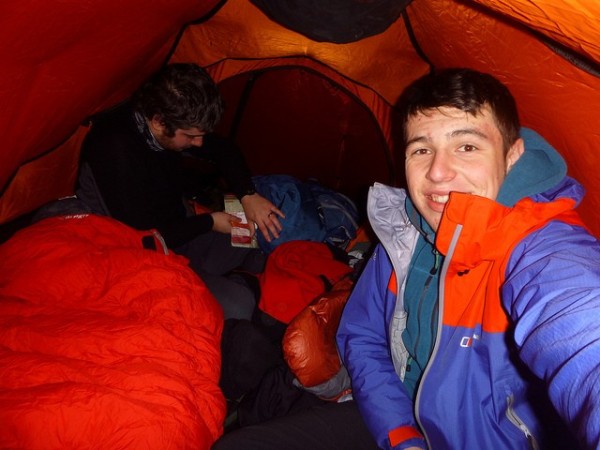 Oisin was clearly glad to be out of the wind

After a few moments talking general in-tent rubbish about ready meals and their various merits, the comfort of a good sized porch etc. I heard an almighty roar and nearly jumped out of my skin. Spud and John had arrived. After almost soiling myself, I worked the cramp out of my calf muscle (I was that jumpy!) and got out to meet them.

We got a firelog started and stood around it having a few sips from Spud’s flask of bourbon and generally laughing at the fact that I nearly had a heart attack. Revenge will surely be sweet, but when? Who knows.

I kept warm in my Aclimatise Seahawk fleece and Osprey jacket. I even covered my face to keep warm and avoid breathing smoke from the firelog. The fleece and coat really did the job considering the cold bitter night and my general condition that evening. I’ll be curious to try it in even colder temperatures. 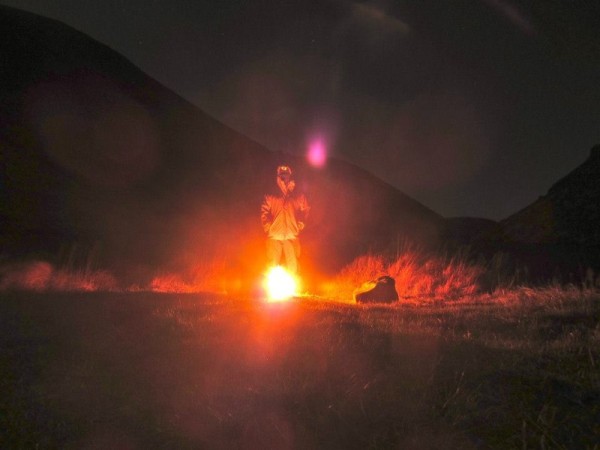 I was basking in the warmth

After a few hours of great craic we hit the hay for the night. I was toasty in my insanely over the top Skyehigh 1000 winter bag, a little indulgence as I was feeling under the weather. 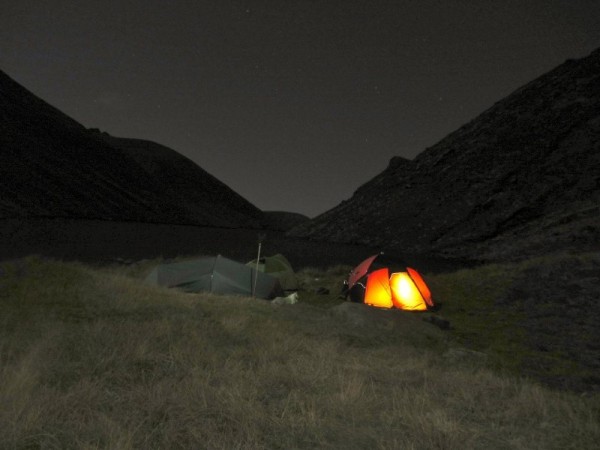 Ready to hit the hay

A good warm night’s sleep was had by all and the view in the morning was ample reward for any cold we might have experienced:

Spud, John and I had an ample breakfast while Oisin fulfilled his promise as a teenager and lay in his tent for a while longer.

I enjoyed standing around in the new fleece, not really feeling the cold much at all. Unlike my down jacket (which admittedly is warmer) I didn’t fear any rain which may have came. 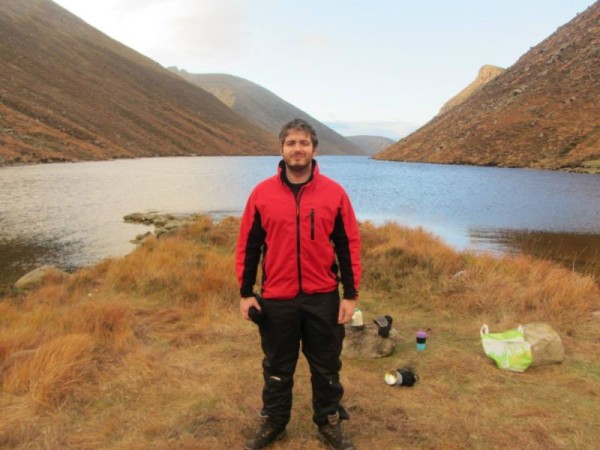 Toasty and ready for breakfast

Oisin took a few fills of the reservoir with his new water filter bottle and we all packed up. John headed on in advance to get some footage as he walked.

On the walk back we enjoyed all the sights we didn’t really have time for the night before, such as the stunning castles of Commedagh: 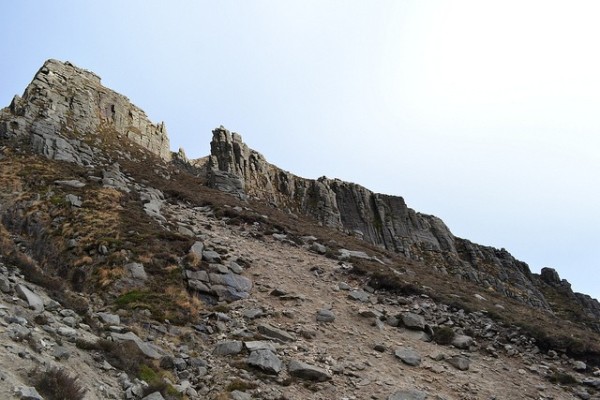 The weather was particularly mild and we set a leisurely pace heading back along the brandy pad. Oisin was feeling a little beat due to how little he had eaten, so stopped for a ration pack along the way. Fortunately my more ample fat reserves kept me ticking over nicely. I reckoned all that salt from the ration pack would have left Oisin thirsty and surely enough the water filter bottle was used at a little stream along the brandy pad. 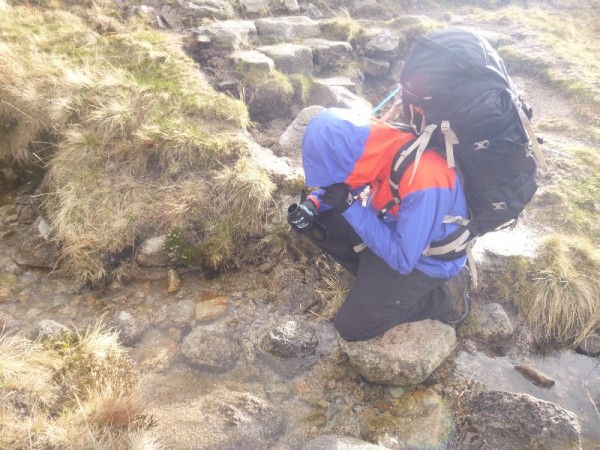 It certainly was a bonus being able to fill up from wherever without the usual hassle of pumping and sterilizing water. Time will tell if the little water bottle lives up to its promise over the long term.

Spud seemed to really be enjoying himself – and it was no surprise as the views were spectacular. It’s really quite amazing how the weather the night before was so ferociously windy and cold, yet the morning so mild and clement. Nobody was in a huge rush, as I didn’t need to be back to work until 4:00 while Spud and John only needed to get as far as Downpatrick.

Despite our leisurely pace, the fleece wasn’t needed at all. It seems that during activity a coat and a baselayer is all I tend to need. I’d like to say the weight of my pack was effort enough to warm me, but it didn’t feel heavy on my back that day at all. 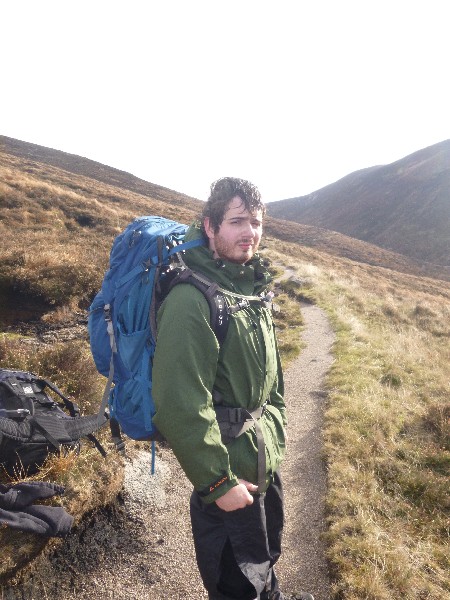 We could see Donard in front of us and it was covered in a light dusting of snow. 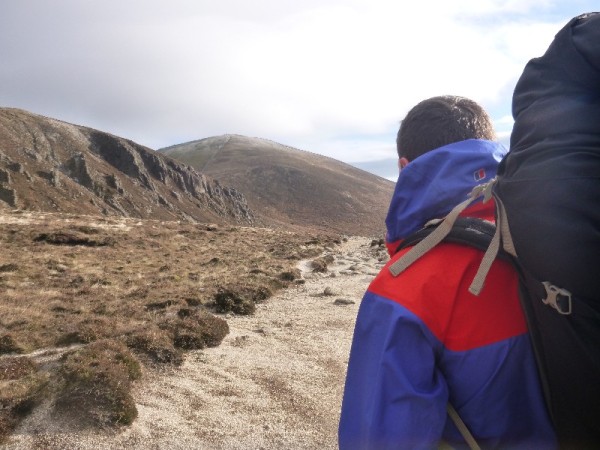 We marched on following the high-visibility orange dot in the distance which was John. We and caught up to him not long before the brandy pad turned inward to head towards the saddle. He was full of enthusiasm about his footage, something John has always enjoyed while out in the hills.

The view from the saddle itself was breathtaking – John got a great shot while I was taking in the view, there were plenty of times where we just stopped to soak it all in.

We made good time once we were over the saddle, as this is something we have all seen scores if not hundreds of times. The steep clearing at the bottom of the forest known as “the highway” allowed us to make better time than usual on our way down into Newcastle – which was fortunate as Oisin and I made it to the bus just in time.

John and I both had a day’s work to follow. I got into work with a few minutes to spare, showered, changed and started a shift until midnight – tired in body but soaring in spirit.

Even though there were moments where the going was tough due to feeling ill I don’t remotely regret taking the trip. The same goes for having to work until midnight after day two – it was a worthwhile price to pay for a great night hike and a memorable morning in the hills. Sometimes you’re sick, tired, not in the mood or don’t have the time and the best thing is to just set the excuses aside and get out there and do it.

The route is displayed below in an interactive panel. Use the slider to scroll in or out, or the dropdown menu to change the map type. You can also download the GPX file to follow our route on your next hike, but please do bring a map and a compass also. (This route includes the return journey on day two)

Photo Album: Flora and Fauna of the MountainsUltralight Musings