It had been a few week since my last camp and I was starting to develop cabin fever. I put out a few suggestions to both Spud & Ed about either a coastal camp or a Mourne camp. Ed got back to me first by confirming he had taken a half day on Friday and would meet me in Newcastle. I unfortunately had to working until 6 pm and would hook up with him in Newcastle. Walking into work I must have been something funny to look at in my uniform with my backpack and hiking boots on. 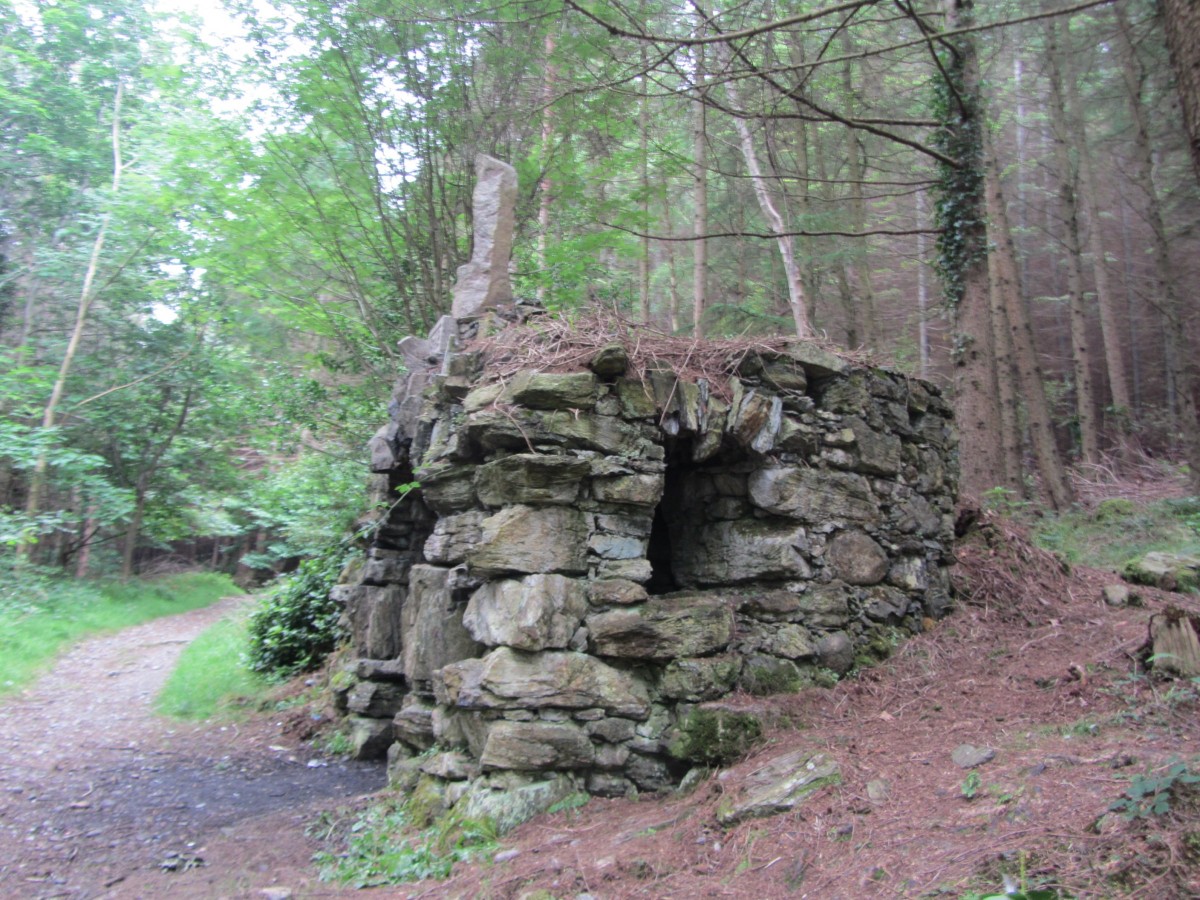 I met Ed under under the arched entrance to Donard Park where we drew up some battle plans. Having camped all over the Mourne range we wanted to venture somewhere new. We stopped at a picnic bench and looked over our ordinance survey map. We needed to factor in that I had to go straight from the mountain the following morning into work and had little time for travelling.

After studying the map for some time we decided to explore the lower slope of Millstone mountain with the aim of camping near one of the quarries. It was 7pm as we ventured into Donard wood and the air was heavy with humidity. Reaching the first bridge we followed the glen river track briefly before turning left towards the Granite trail.

We made our way throught the forest slowly contouring along the hillside. After ten minutes or so we came across an old stone structure which I believe formerly belonged to Donard house, which was at one time a well appointed, grand house of a local landowner. Located a short distance away was the granite trail which is a steep pathway that was used to descent the cut granite to the dock before.Crashing waves could be heard below us now and the Irish sea provided us with a cooling breeze as we slowly made our way forward. 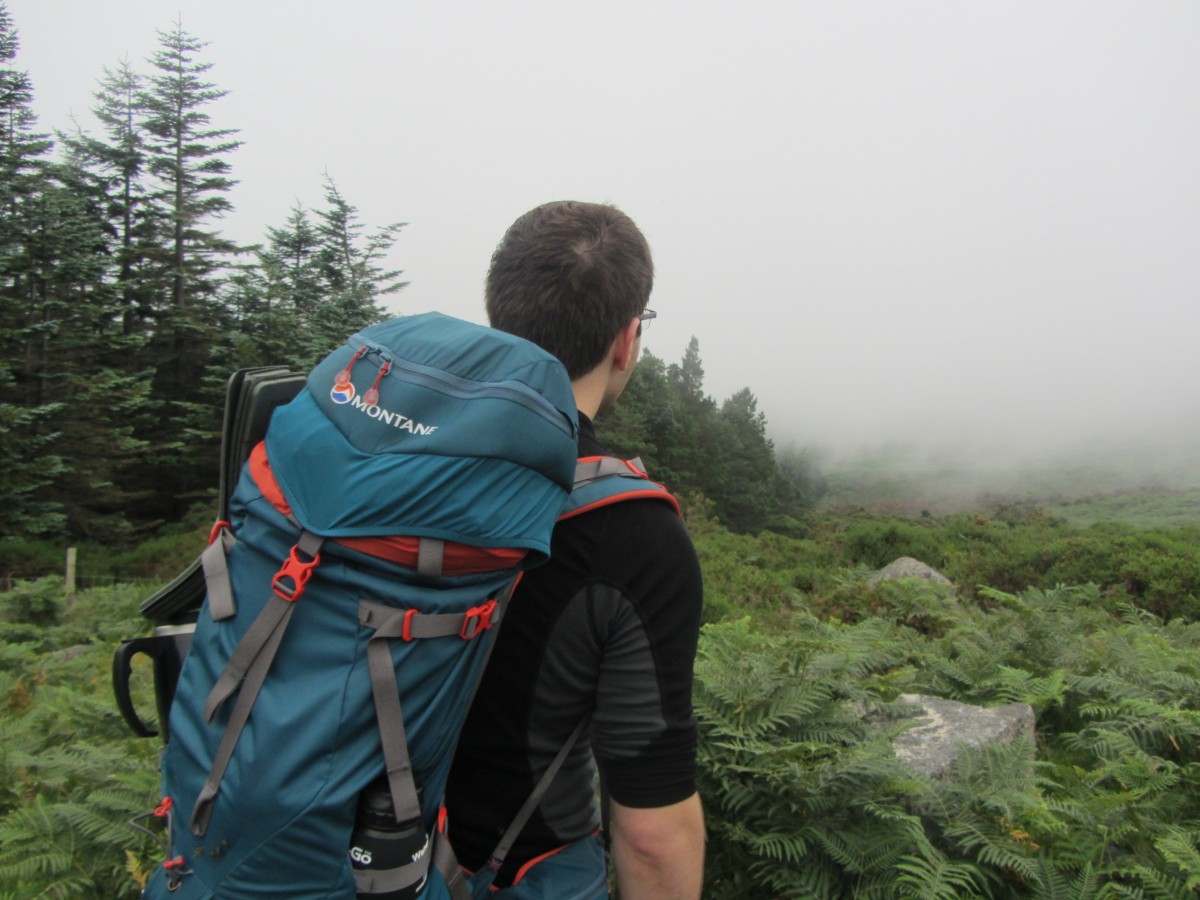 Our next crossing brought us onto a steeper trail as we left the forest behind to be greeted by the open mountain side. The weather began to close in on us now with visibility down to about 40 feet. After another quick map check we were confident we were on track to reach the ground near the quarry so we pushed on into the cloak of mist.

Winding our way up the trail we reached our pitch for the night and quickly set up camp. The first order of the day was to get a brew on but unfortunately we were running low on water so finding a source close to camp would be good.

The nearest stream at hand was below us on the valley floor and we would have lost all the ground we had gained earlier in having to descend only to ascend again. 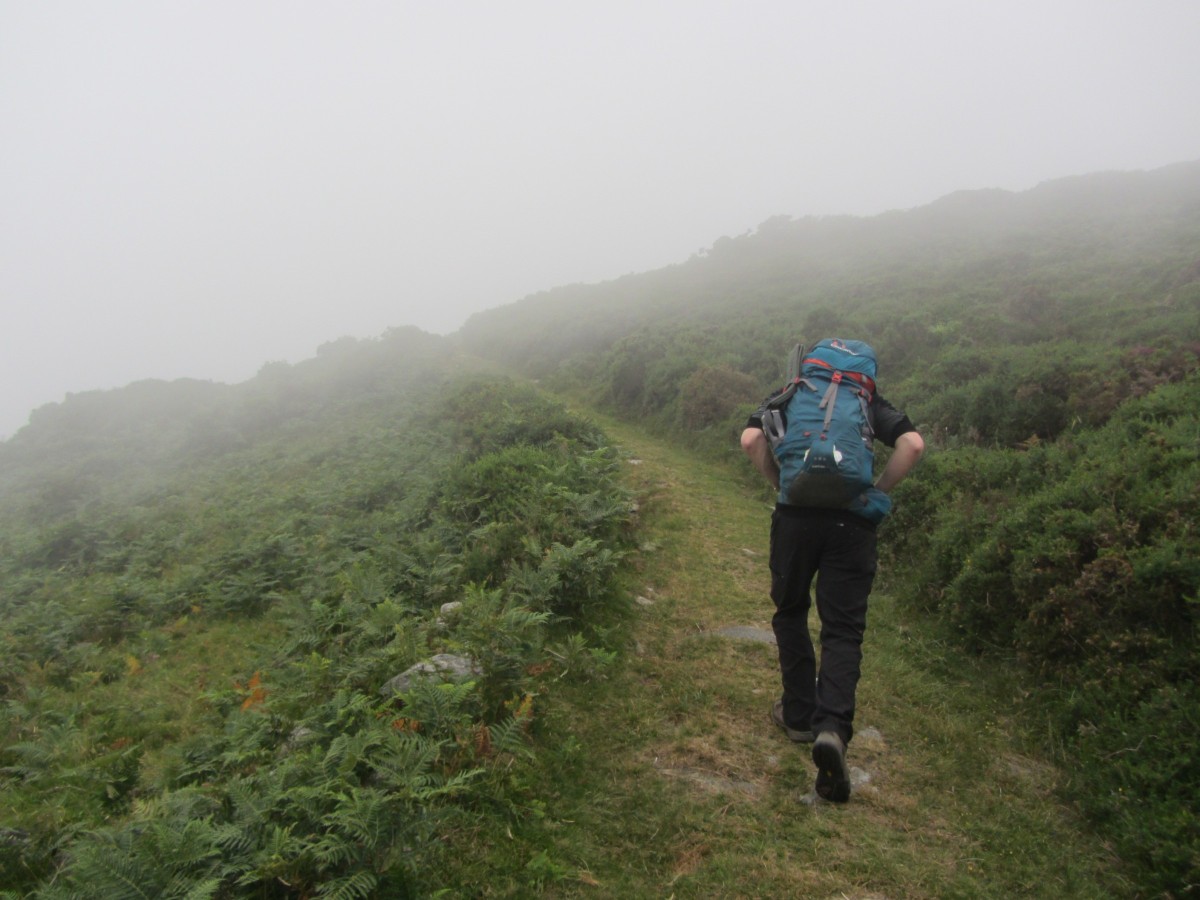 Before heading down, we decided to first go up towards the quarry hoping for water running off its walls.

Crossing over a mismatched wall of all different sizes and shapes of granite we entered the quarry. Towards the quarry face I noticed a ladder and a wheel barrow. To our utter delight the shiny new plastic wheelbarrow was full of freshly collected rain water. To be on the safe side any water we would be drinking would either be filtered through the WaterToGo bottle which removes harmful bateria or boiled using the MSR Reactor to make tea or coffee.

After a nice hot brew the weather really started to call time on us. The moisture in the air was quite bad so we sat in my Vango mirage tent listening to Pink Floyd and relaxing whilst all around us mother nature stirred her cauldron. 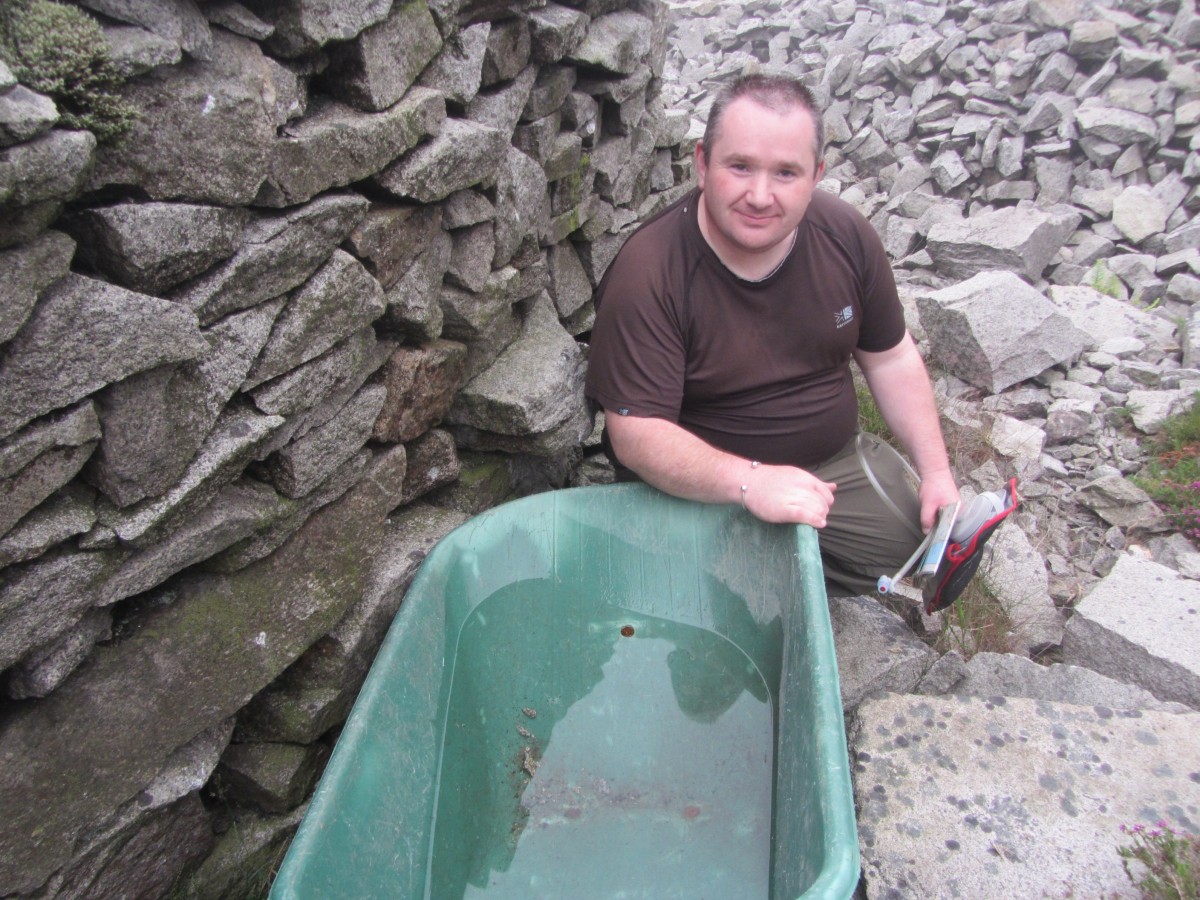 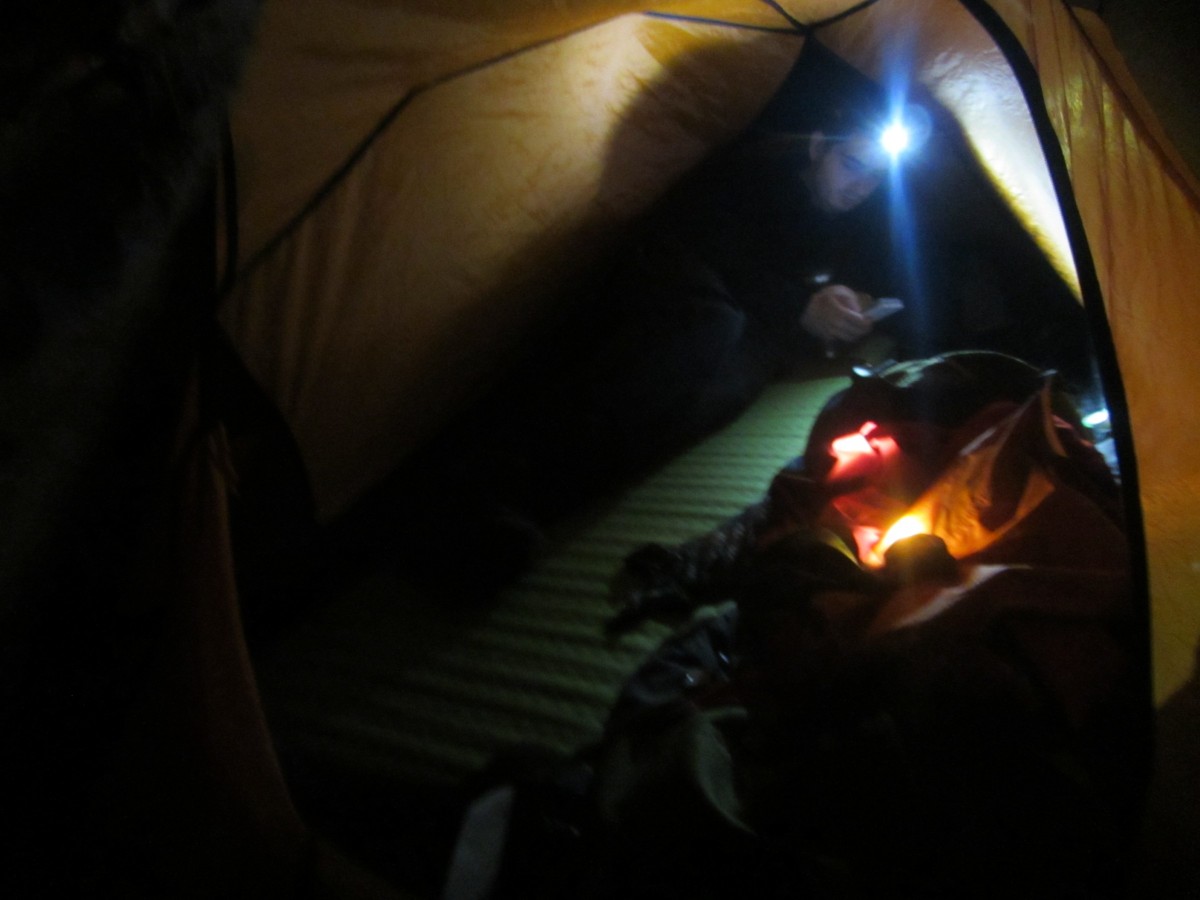 We chewed the fat and listened to music to well after midnight before Ed retired to his bivvy bag.The weather had not been great but we had not let that spoil our chance for adventure, here we were high on Millstone mountain, relaxed and ready to sleep having ventured into the Mournes. 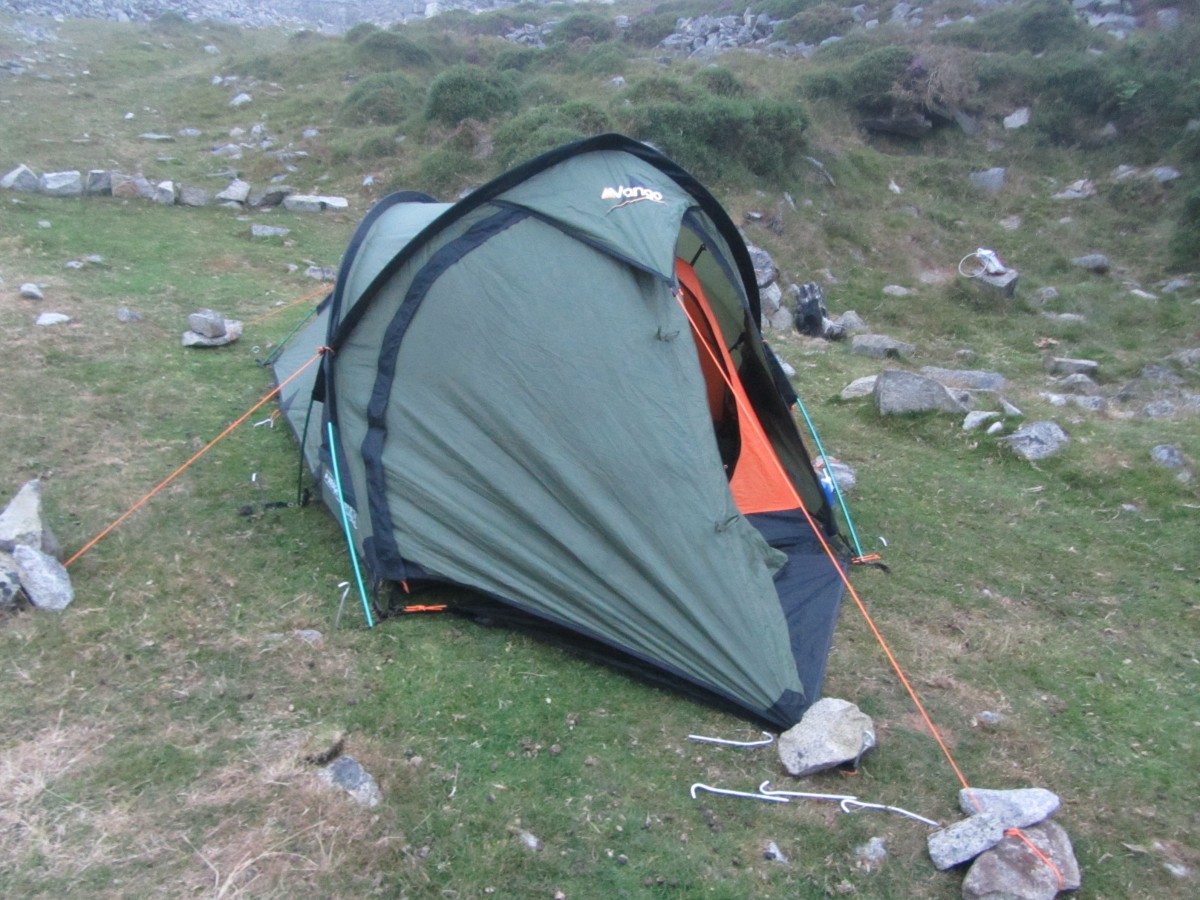 I woke briefly around 4 am and had a look outside, it was just the same as last night.

We lay covered in a heavy bank off mountain mist, the approaching dawn was to be stolen for us, replaced by white out. Two hours later I woke again, this time I decided to stay up. 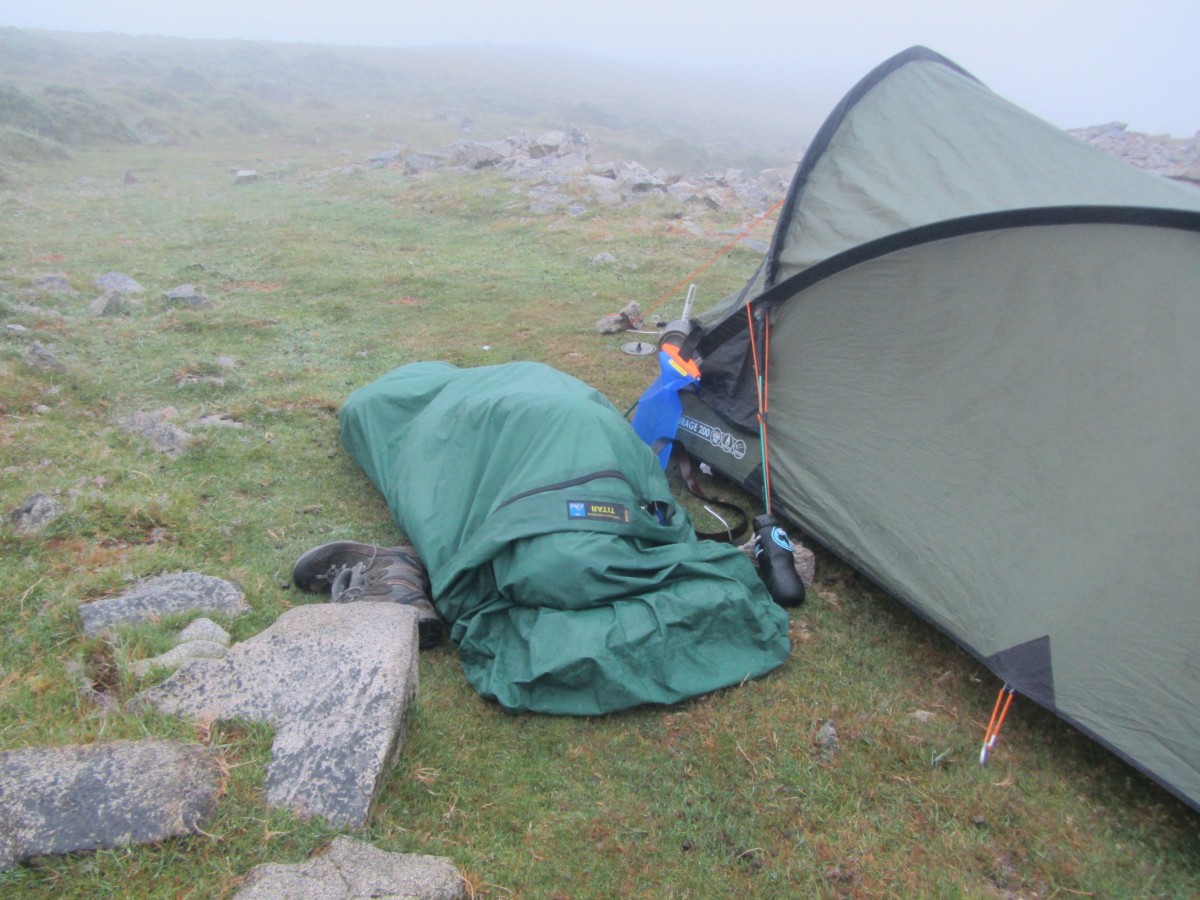 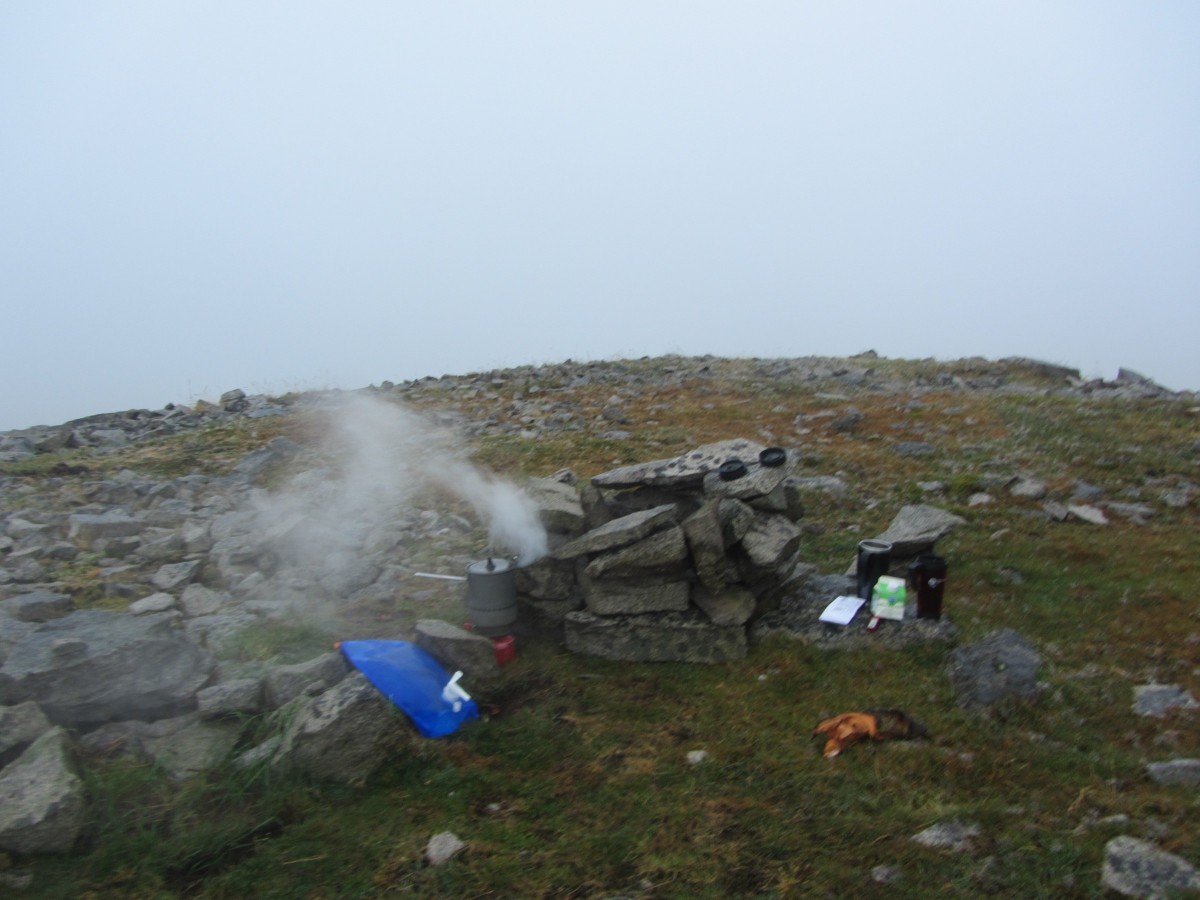 Firing up the MSR it was time for our morning fix of caffeine. We slowly began packing away our kit while outside the bad weather continued. As we prepared to break camp we were gifted with parting glimpses of Millstone summit above us and the valley floor below. It was was 7.15am as we made our way through the mist cloaked Donard wood.

We took a slight detour following the granite trail down to the harbour. 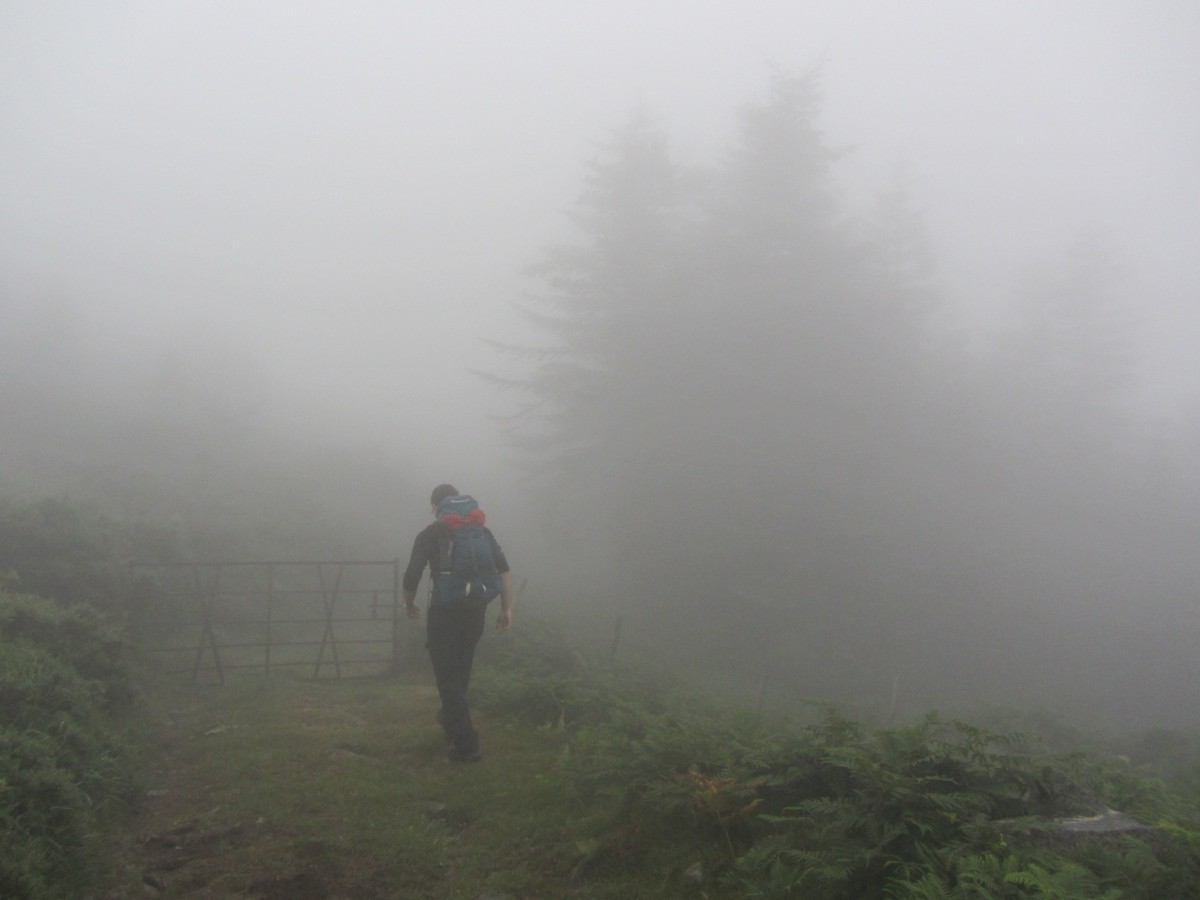 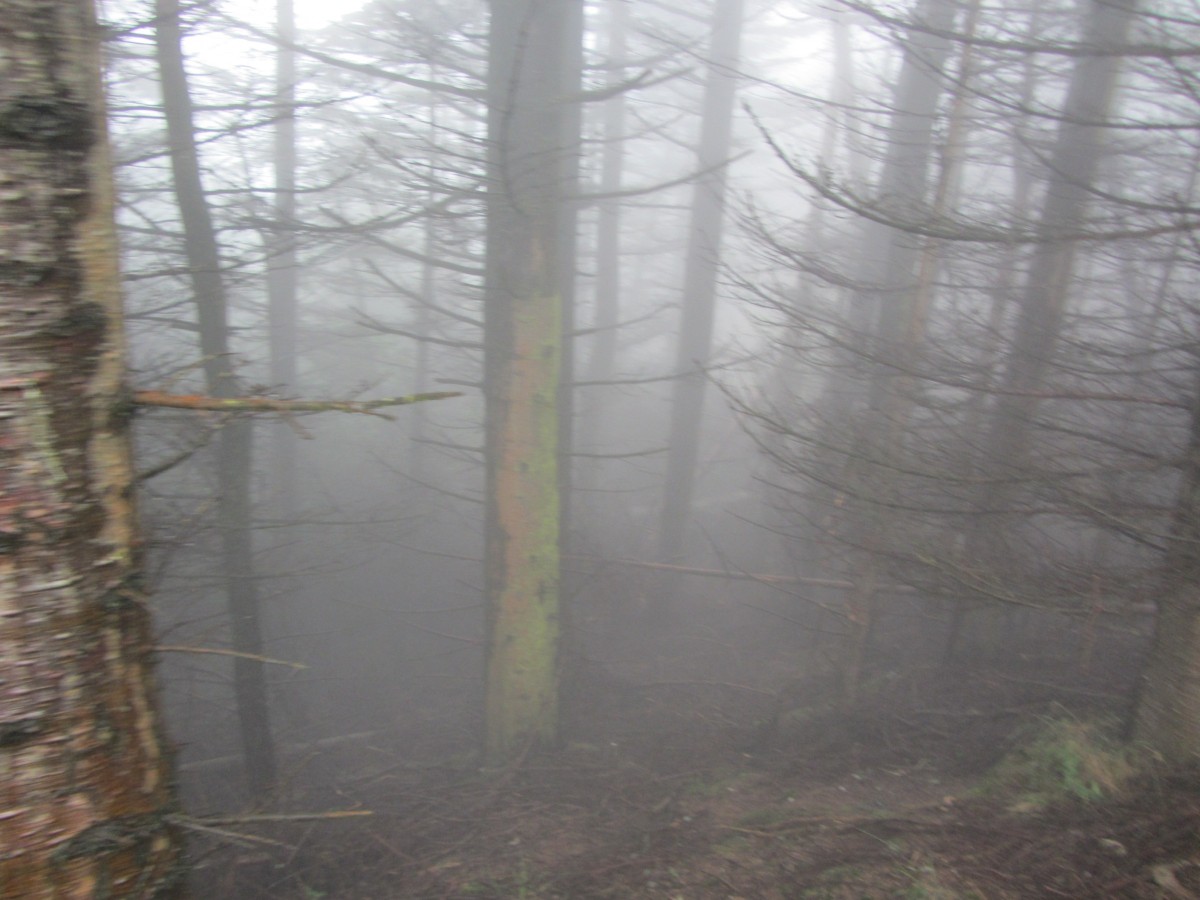 Walking along the coastal road we watched shop owners going through the morning ritual of opening up.

Reaching Maud’s cafe we stopped for bacon sandwiches and another caffeine fix.

Having never camped on Millstone mountain before I was glad we ventured out last night into the mist. Sometimes you need to strive in making an adventure for yourself. 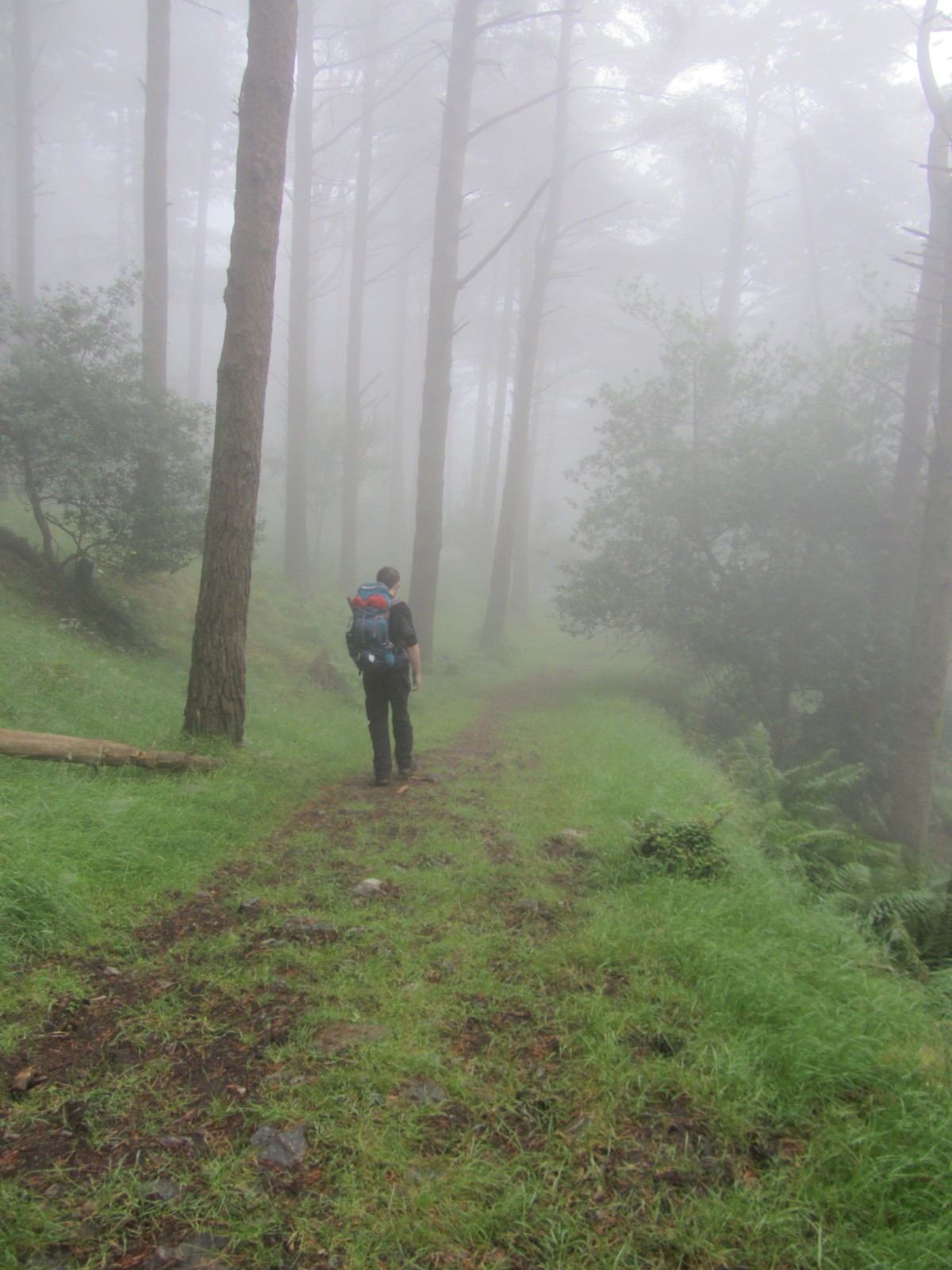