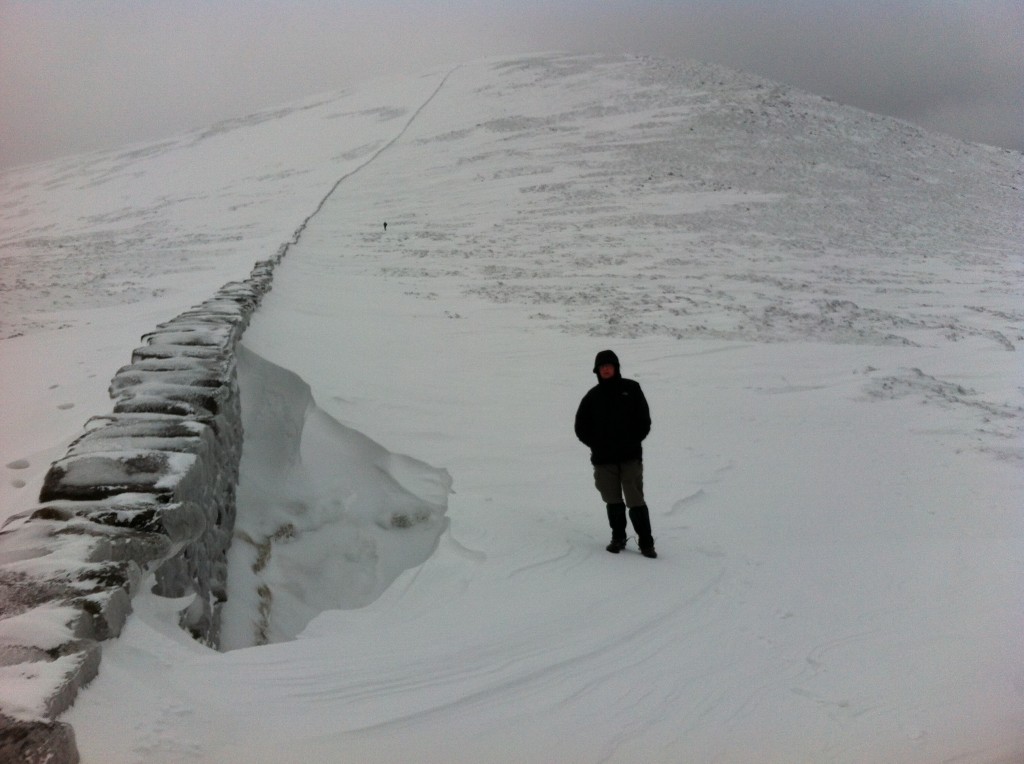 The walk had been a last minute Saturday night decision, I’m a man who loves a Sunday lie-in, but with it being my only day off, and a week of late shifts ahead of me, I felt an early appointment with the soul nourishing landscape of the mighty Mournes and the memories it would provide would sustain me during my working week more than sleeping til lunchtime! So the plan was hatched, and my wife Catriona as always took no coaxing to get out and enjoy some hill time.        A quick up and down walk to the Mourne wall, starting off from bloody bridge and back down in time for Sunday lunch! So it was off to bed for an early start the next morning.

Beep, beep, bee… The alarm was quickly silenced, and even though it was 530 am,  its always so much easier getting up at ridiculous o’clock when you are going to spend some time enjoying the mountains, rather than the commute to work, or other less pleasurable tasks! The roads were virtually deserted as we made our way through newcastle and parked at the bloody bridge carpark. As soon as we stepped out of the car, the strong and  biting easterly wind greeted us,   it was churning the sea onto the rocks on the shore below, whipping up the water to the consistency and colour of a settling freshly poured pint of Guinness.             As we started our walk, apart from the cold wind, there were definite signs of spring in the air, the bloom of the gorse scenting the air with its coconut perfume as we made our way up the path.

We soon reached the point where we had to cross the bloody bridge river, a task made easier by some large stones to step on and safely navigate across, well, it wasn’t as easy as it looked! Half way across, and I stepped on one that was covered in sheet ice that was cunningly disguised as water on its surface! All too late I realised my mistake, and I was down. It wasn’t a heavy fall, I went down on one knee, but my left leg ended up in the icy water, the river depositing a large dose of it into my boot. I picked myself up, and got back onto the stepping stones, getting more water into my boot in the process! I got across, ensured my walking companion did likewise, quick pit stop to empty the boot and wring out my sock, and on we pressed. 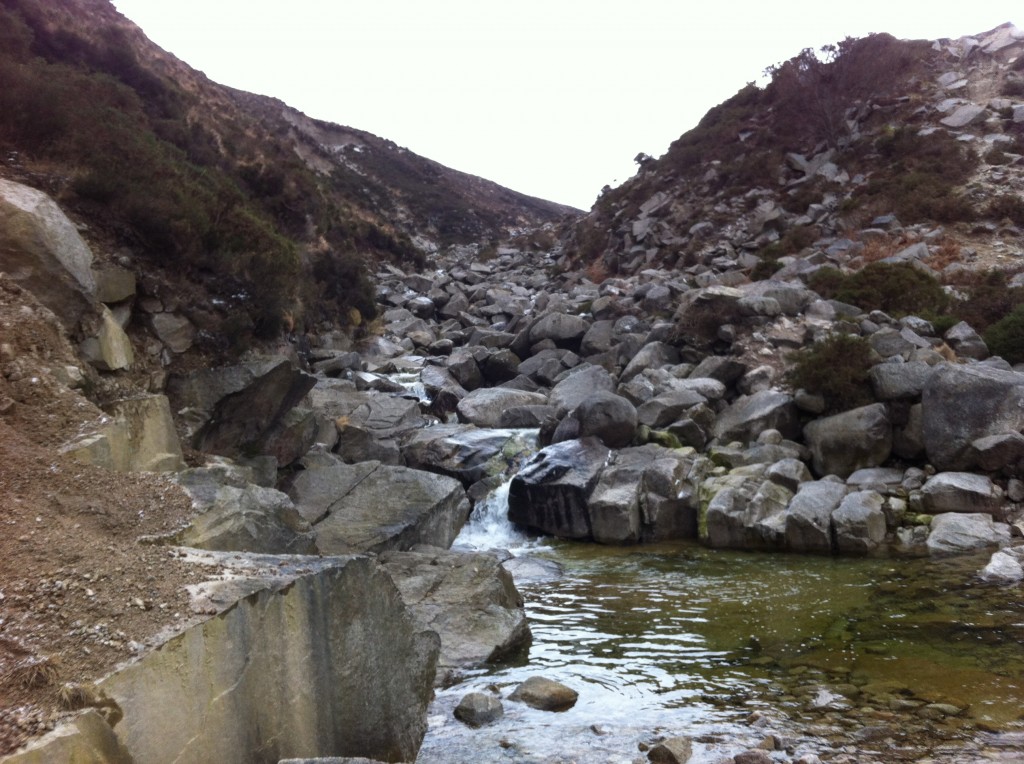 Once over the river, we picked up the large easy track that winds its way to the abandoned quarry under chimney rock montain, one of the many places where stone was hewn from the mountains, and ferried to many different places both in Ireland and elswhere to perform many different tasks. As we ascended, the snow cover on the ground began to thicken, the ditches and hollows filled with powdery snow, the heather poking through like some sort of strange confectionery that had been too liberally dusted with icing sugar. The many rock faces in the quarry were covered in icicles of varying size, some like ice stalactites, the smaller ones resembling lines of abandoned christmas lights waiting for someone to turn the power on. We stopped in an old stone structure for a tea break, the stone walls covered in snow providing respite from the gusting wind, and a chance for a breather. 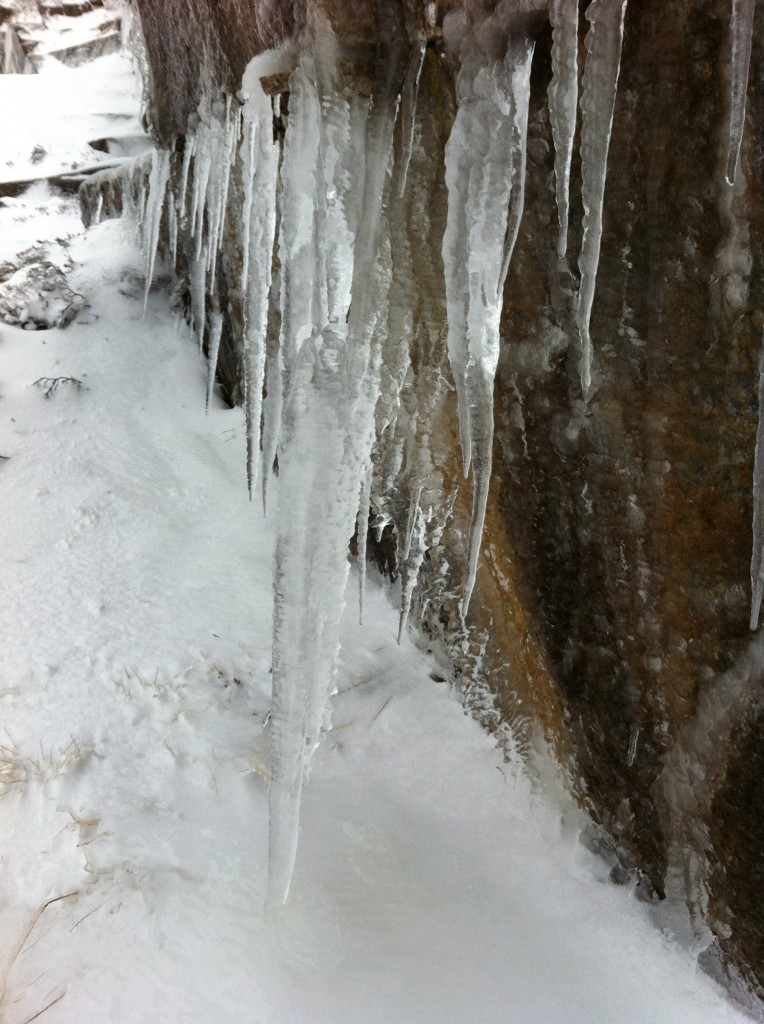 After our quick break we ascended again, first crossing the bloody bridge river again, but this time a lot less eventfully! As we stamped our way up, we had to negotiate sheet ice in places, the wind not helping when trying to choose a firm footing! Aiming for fresh snow when possible, we were taking a breather when another hiker passed us. After a quick chat, he pressed on, we watched his progress in front of us, and followed his footprints in the snow, the deeper ones giving an indication of less stable areas in the frozen terrain, but not always, as per the start of this yarn! He reached the mourne wall, and started up Slieve Donard, his journey still continuing, whereas for us, the mourne wall was our destination. What a sight awaited us, the snow was so high we could walk up and over the top of the wall, the frozen wooden stile bedecked in hoar frost made redundant by this natural crossing method, waiting for the thaw, when it would resume the task of aiding hikers on their journey towards the brandy pad and onwards. 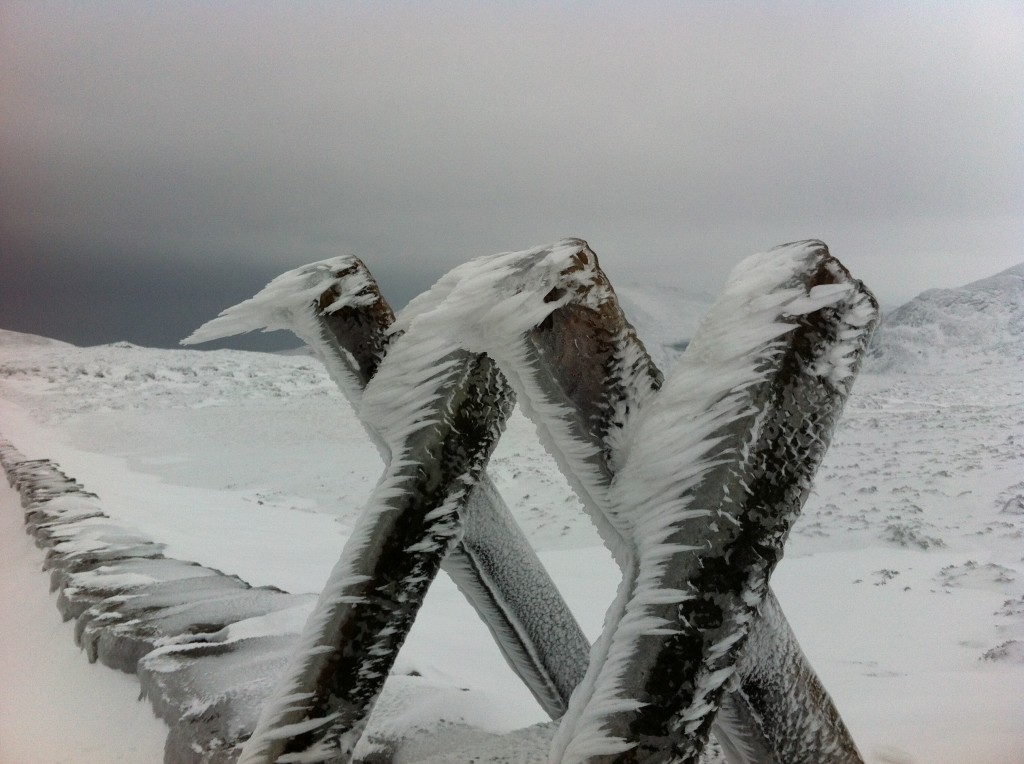 Looking out over the snow covered peaks of the mournes was a breathtaking sight, spirits soared as they weaved their magic upon us.  After some pictures and a quick breather, we were beginning to get cold, I went to take a drink from my water bladder, only to find that the water had frozen in the bite valve! 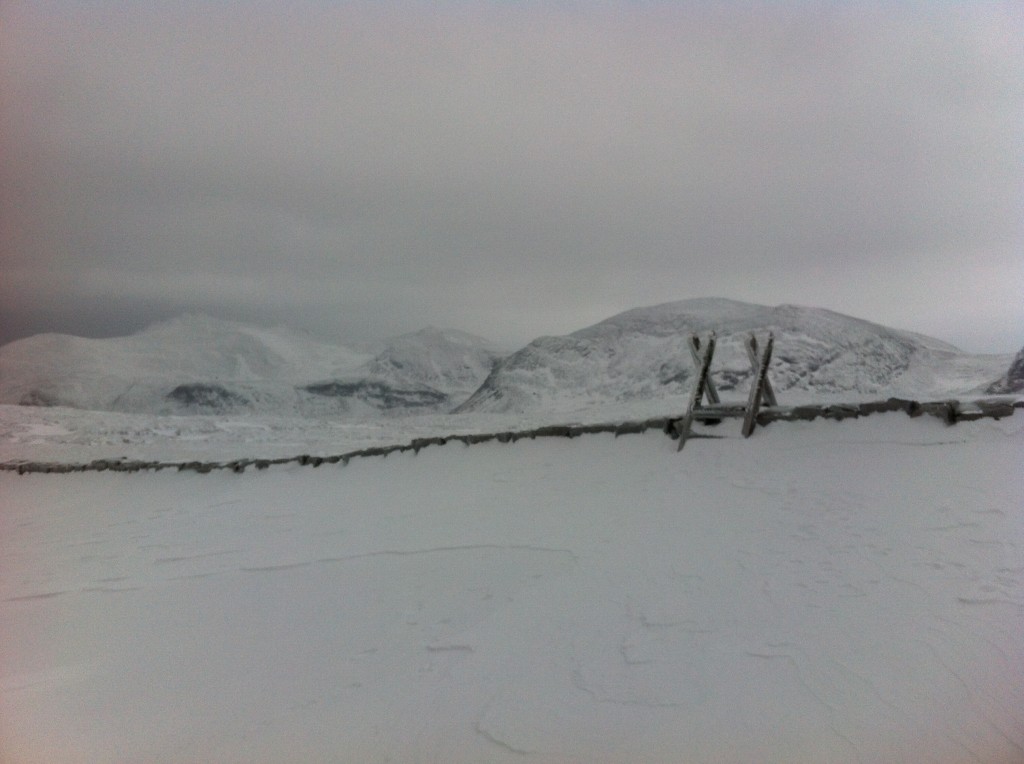 We picked our way back down after that, retracing our steps where possible, the spindrift and the wind already removing some of the shallower footprints, as if the snow wanted to remove the fact that we had even been there at all, we didn’t encounter anyone else until we reached the quarry again, our early start ensuring we had the place pretty much to ourselves, aiding in the sense of isolation and escape, further vindicating our decision to leave our cosy bed in favour of the majesty of these frozen vistas.  So next time you have a day off, set the alarm early, get your hiking boots on and get out there!  Your soul will thank you for it!