The heather in front of me suddenly exploded in a fat blur of feathers, the grouse whirring away from the intruder who had disturbed it from its heathery roost. I uttered a breathless expletive, but it was lost on the hard wind blowing across the seemingly barren heathland. I watched the bird glide away quickly on  bowed wings to another well hidden hiding place, and with that, the heathland was silent again, save for the aforementioned wind.  I called out to John and Ed, who were upwind of me. “GROUSE!! Did you see it?” But they couldn’t make me out, so on we plodded through what remained of this undulating sea of peat and heather.  Although at least now we could see the end of it, and harder ground ahead. 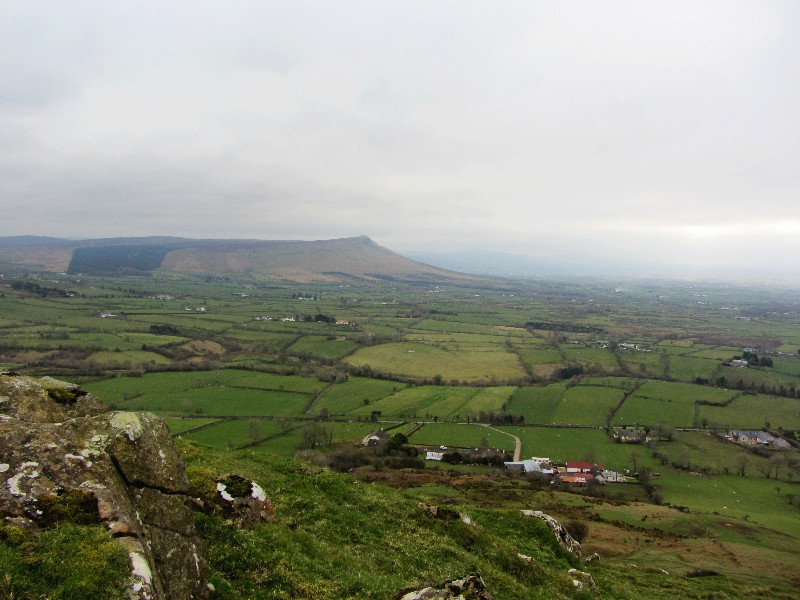 We were nearing the end of our first day on the North Sperrin way, a section of the Ulster Way running from Dungiven to Binevenagh.

With the inclusion of  an additional section finishing in Castlerock, which would be the end of our walk. The walk is listed as being 37.5 miles, but our heathery detour led us to walking closer to 40! We had always planned to walk it over 2 1/2 days, starting Friday morning in Dungiven, and finishing Sunday lunchtime in Castlerock.  We would have 2 wild camps along the way, which meant carrying everything with us that we would require for our trek. 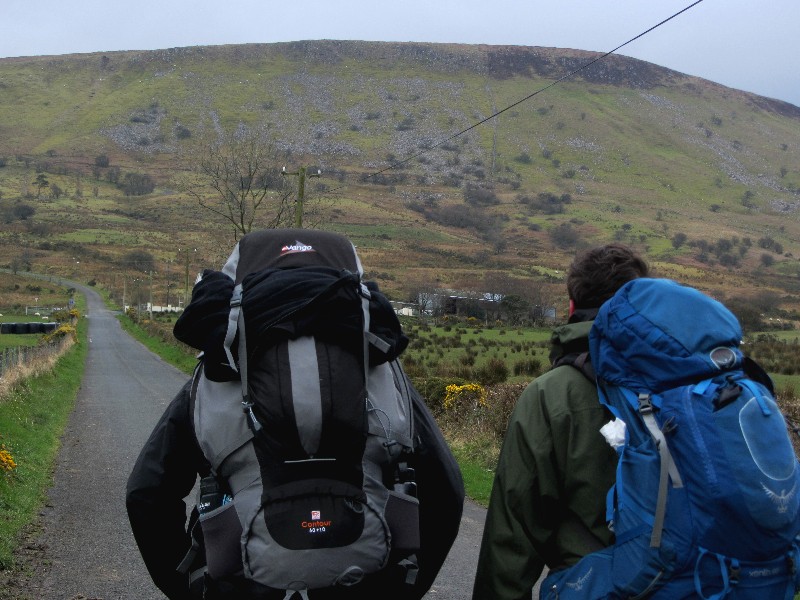 Long conversations and much planning had gone into our trip, and originally nearly a full compliment of the Hikers Blog gang had been scheduled to go. However real life got in the way, and a combination of work issues and other unforeseen circumstances meant that only John and Ed joined me at the start line in Dungiven. We had aimed to pack about 15 kilos of food and equipment each, but I overshot this by about 5 kilos! However I had trained well for the walk, and felt confident I could lug the load without problems. We got off the bus from Belfast in Dungiven just after 9am, and with all of us having been on the go from around 5am, we agreed a spot of “second breakfast” was in order.          So we walked a short distance to a nice little cafe, where we fueled up on sausage and egg sodas, while being entertained by the banter of 3 locals who were also enjoying a cooked breakfast. Suitably fed and watered, we said our farewells, left the warm cafe and slung our heavy packs on. The forecast gave rain, and as we looked skywards, the signs didn’t look like it would be far wrong. 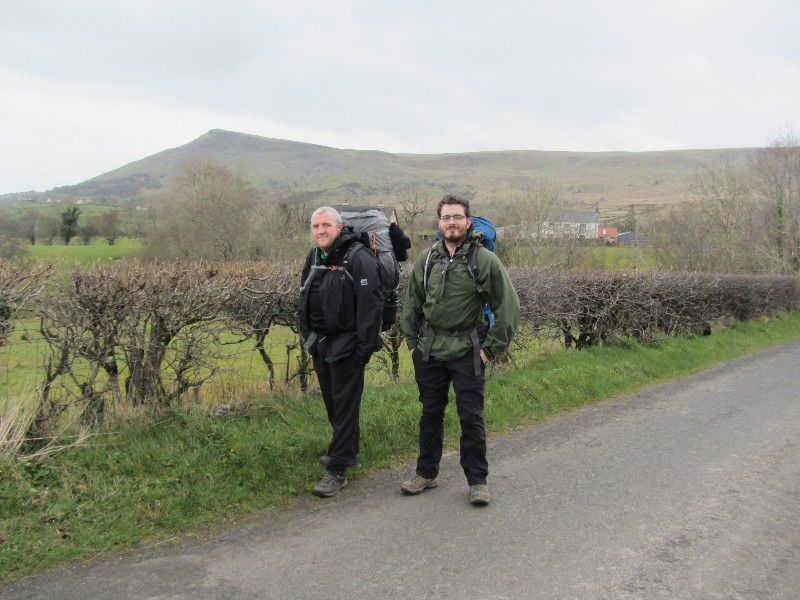 We made our way towards the outskirts of the town, before bearing left onto the official start of The North Sperrin Way.  Although from what we saw, there was no sort of indication that was the case? Unfortunately this was not the first time we would experience a lack of waymarking on this fantastic route, but more about that later. John had done some great prep work scouring the route  in the weeks leading up to today, and we knew exactly where we were headed anyway. The first part of the walk took us along a reasonably flat section of nice country road, which gave the legs a chance to warm up, and the cooked breakfast a chance to settle!  We stopped to watch a Murder of Crows defending their nests from two marauding Buzzards, their constant divebombing  attacks driving the much larger birds away for now.  The road started to steepen, as we made our way onto our first real ascent, up the steep road to the slopes of Benbradagh.  The twisting black ribbon of tarmac winds its way in a constant ascent up the mountain, and is used for motorsport hillclimbs. Our progress was somewhat slower than a well tuned racing car to say the least, but we put our heads down and got on with it.  We had the occasional stop to enjoy the view, which was being rapidly swallowed up by the mirk of the dark grey rain clouds sweeping towards us.  We reached the top of the road at the same time as the rain, and full wet gear had to be donned. 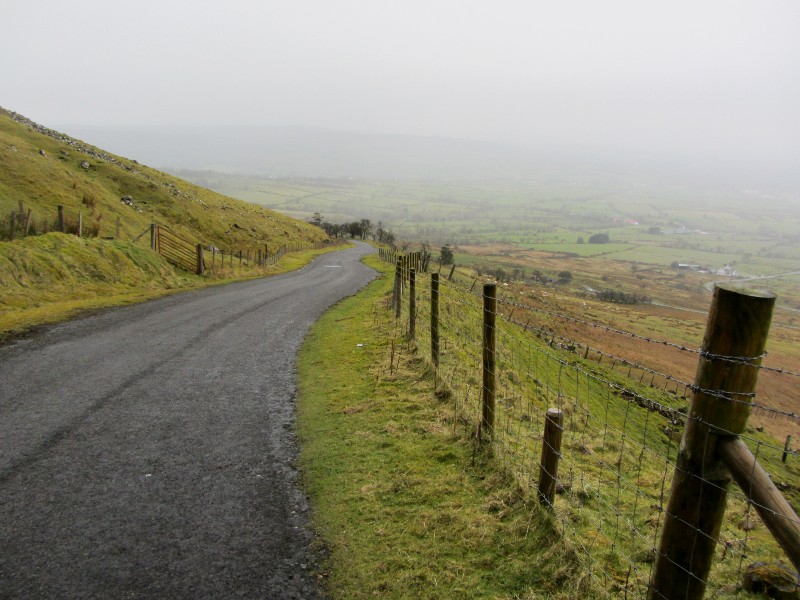 Hail accompanied the rain, stinging our faces and rattling off our packs and outer layers, as we made our way down the “American Road”, made to service the long closed US Navy communication centre on the mountain.  After a brief look around the ruins of this, I found myself imagining what it would have been like here when the station was in operation. It was certainly a good view for the Navy personnel who operated it!  We pressed onwards, following virtually deserted country roads and tracks, before making our way up a much busier main road towards Legavannon Pot, a natural feature caused by retreating glaciers.  Lunchtime was approaching, and we knew there was a country Pub just ahead of us. Talk turned to a refreshment break to help us on our way, but when we reached it the door was closed, and our hopes of a refreshing pint by a roaring fire sadly dashed.  We made do with a picnic of sorts along a country lane, and once refuelled, resumed our trek. 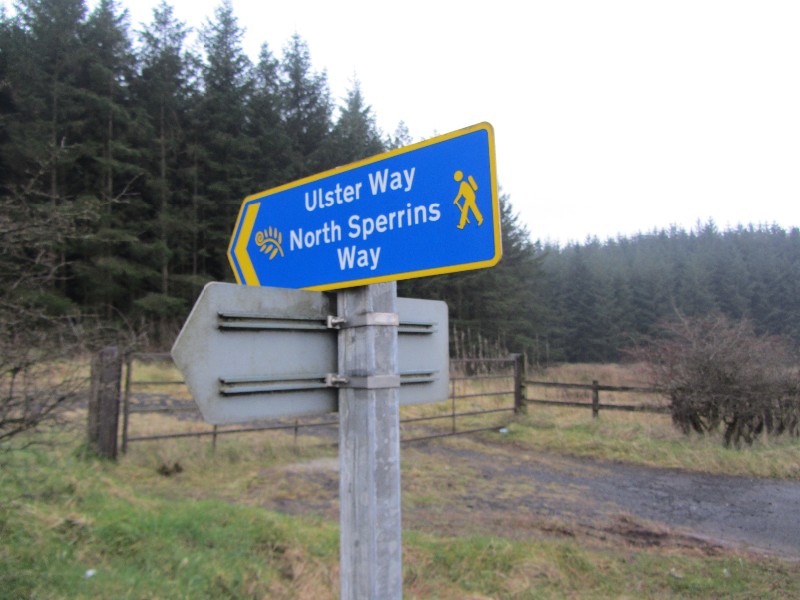 We found ourselves at Donald’s Hill, and the going suddenly steepened again, although it was nice to  be leaving the road and heading across country again.  We explored “The Kings Fort”, a rath perched on the hillside, the earthen fortification long outliving its unknown ancient inhabitants, still standing watch over the sweeping countryside from its lofty location.  We paused a while to drink in the stunning views, and take on some well needed fluids, refreshing the body as well as the soul. After this break we made a slight navigational error, and found ourselves in the depths of the aforementioned heathland, the tricky terrain further sapping our tired muscles after the days walking.  We rested on the road,  our feet and legs enjoying the firm and even surface, but before long we were cutting across heathland again.  There was no waymarking at this point of the route, and more tough terrain had to be negotiated, before we finally found ourselves at our first camp, near Rigged Hill.  Camp pitched, we feasted on various meaty morsels, and with full bellies, hit the sack for an early night.       We awoke to a misty morning, and we weren’t that far into our days walking when the rain started.  Apart from the odd brief respite, the rain stayed with us all day, varying from a fine drizzle to heavier spells of driving rain, most notably when we had stopped for lunch!!

The second day of our trek was on much better tracks and roads, and our pace reflected this, and although the weather wasn’t playing ball, our spirits were good.  We circled a large windfarm, the huge turbines looming out of the gloom like massive alien robots that had chosen this corner of the Sperrins to start their invasion of the planet.  We ascended off the road again, making our way up through forest tracks and quiet country roads, passing the reputed home of the infamous highwayman “Cushy Glen”. An abandoned stone cottage in a dark woodland, the weather conditions further adding to the mysterious air of the place, known as “The murder hole” where Cushy reputedly stashed the remains of the victims of his murderous crimes. 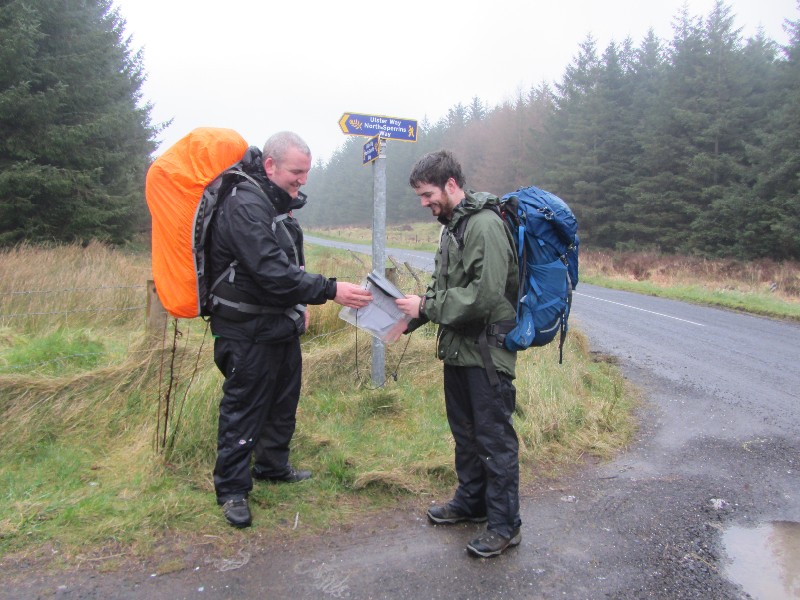 We made our way past TV relay stations tucked away amongst forestry, the huge masts bristling with antennae, dishes and cablework, resembling the lair of a Bond villain in the middle of the trees.  As the late afternoon approached, the sun started to win its battle with the rain, and the weather improved markedly. We soon reached Binevenagh forest, where The North Sperrin Way reaches its end, and set up camp just outside the forest.  Our quicker pace today had allowed us a lot more time to relax and unwind when we got to camp, a change of clothes, more than one brew, and a leisurely dinner followed.  We were joined for a while by our friend Chris, who kindly brought us some morale boosting supplies.  We sat and chewed the fat (and the oat biscuits) for a while, with the clouds finally clearing to allow the stars to put on a stunning celestial display in all directions, before hitting the hay again reasonably early. 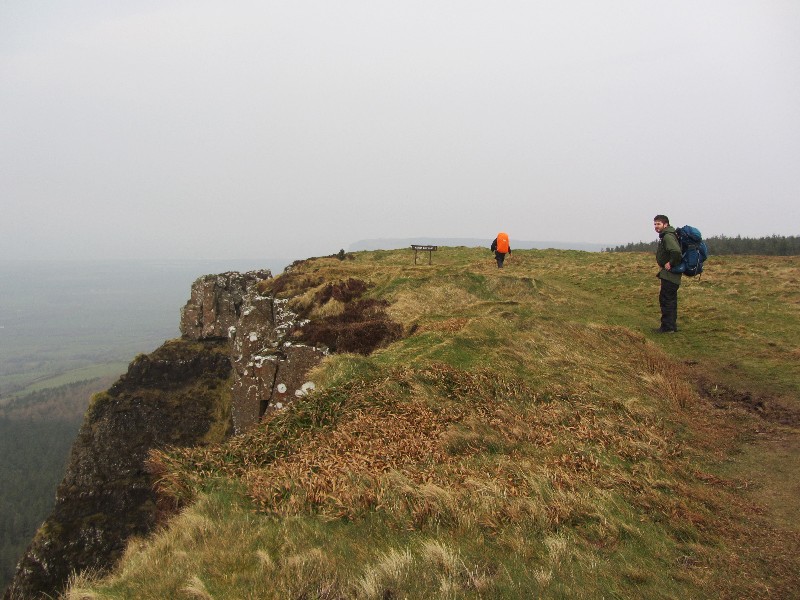 We awoke early next morning (very early, the clocks had gone forward an hour) to find it hazy, but thankfully dry. A leisurely breakfast was enjoyed before packing up the gear, and making our way back onto The Ulster Way, and onwards to our finishing point in Castlerock.  We made our way along the bishops road, the views were stunning, even with the hazy conditions.                 We discussed what it must be like on this road when the conditions were clear, it is a truly stunning location for a walk.  We didn’t encounter a single person for nearly the whole length of the road, strolling along in the morning sunshine for over 20 minutes, just listening to the birdsong and sounds of the pastoral landscape that surrounded us. 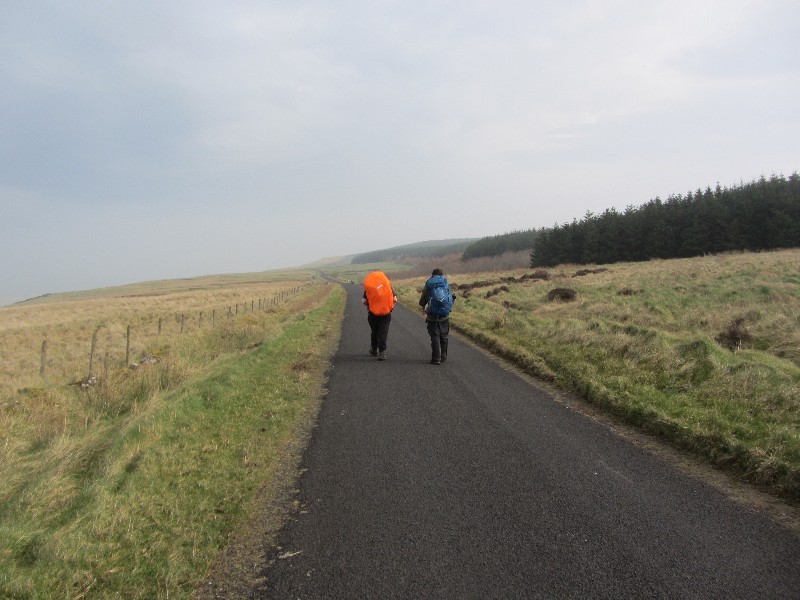 Then it was onto the home straight, our route began to descend to the aptly named Downhill, with Mussenden temple looking out to sea on its cliffside location, and the ruins of the bishops (he of the road we had just walked) house.   From there it was a lovely walk through the very picturesque Downhill forest, and another reasonably short road section took us into Castlerock, where it was very convenient to find the train station for our journey home.  Even more convenient was the bar right beside the train station, where we treated ourselves to some comfy seats and a few well earned pints!  We then got on the train and headed home, with another fantastic walk under our belts.  We were sore, tired, but elated at what we had achieved.

Check out the video footage John took of the hike in the video player below!