A wild camp in the mountains is always enjoyable, but two days gives you an opportunity to unwind and soak in the surroundings. Last weekend Ed and Oisin joined me as we camped along Tollymore’s boundary wall. The lads had arrived in Newcastle around lunchtime and after a feed of fried chicken made their way up the steep leading into Tollymore forest.

It was around sunset when I got to Newcastle with Spud and Catriona who wanted to join me for the walk and spent some time around camp. Making our way up the same steep track I was quite surprised just how strong the wind was, this was certainly going to be an interesting camping experience. As we made our way along the gravel track I once again turned off my head torch allowing my eyes to adjust to the darkness thinking I should reserve my batteries in my head torch. Reaching higher ground towards camp an orchestra of winds we’re battling for supremacy all trying to outplay the other as trees swayed to and fro like drunken sailors with too much shore time. After a quick map check we stepped off the track and into the trees hoping to find a safe crossing point onto the mountainside. Peering over the boundary wall I could see an orange glow of head torches  below us in the valley from Oisin’s tent. 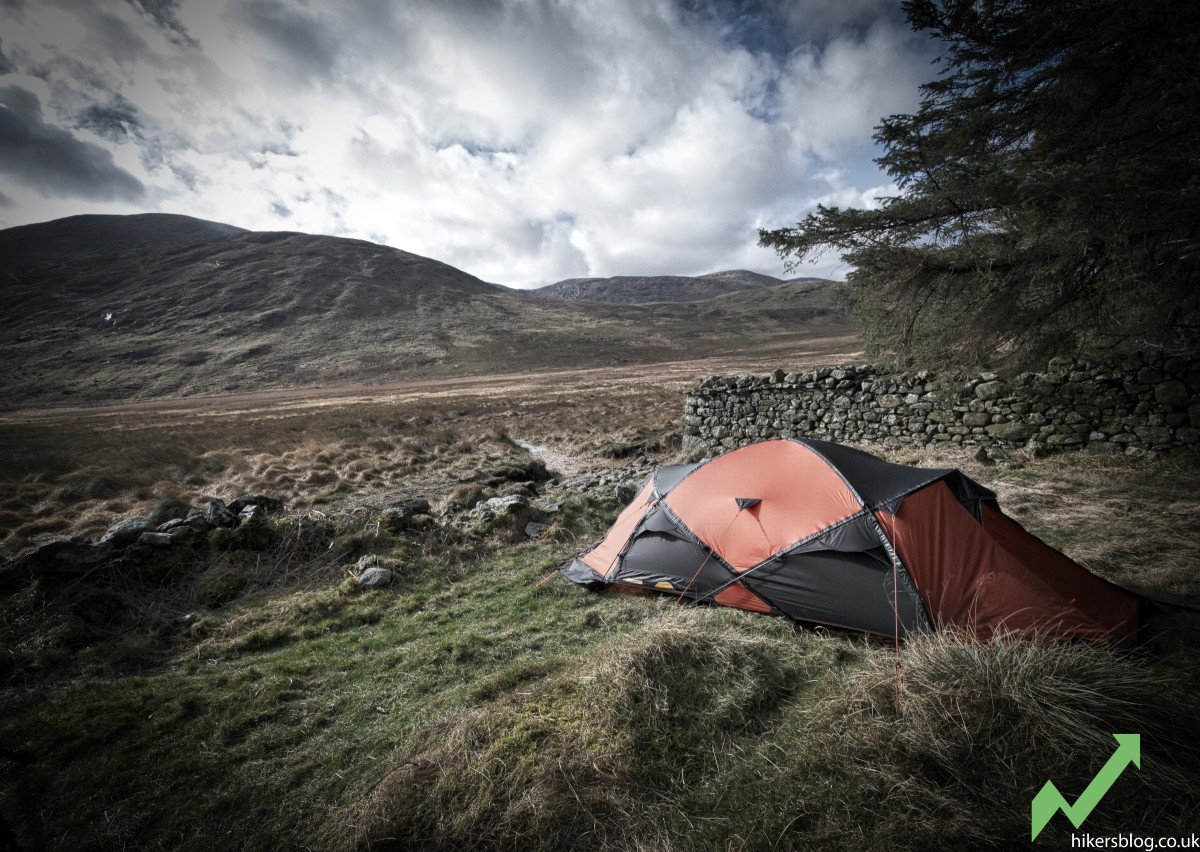 The view towards Tollymore

Pitching my tent at camp I considered such factors as wind direction, as well as level ground I could be seen looking beyond the wall at the swaying sailors pondering if one could fall near me. All the lads joined in and helped me pitch the tent which given the strong winds I was grateful for. I was especially looking forward to trying out my new Xtherm max-sleeping mat, as I’ve never really had a warm nights sleeping whilst camping. We sat around camp chatting about our plans for the next few days and where we’d like to explore. Part of any camp is always the dietary intake or lack thereof and like most of our camps we had prearranged a budgeted menu to include a wide range of red meat. Eamonn had volunteered to take care of this and joined us at camp with his portable BBQ, charcoal, burgers and peppered ribs. As always Spud assumed the chef hat and began firing up the charcoal. After our fill we retired to our tents as Eamonn, Spud and Catriona made their way into the darkness and comfort of warm beds. 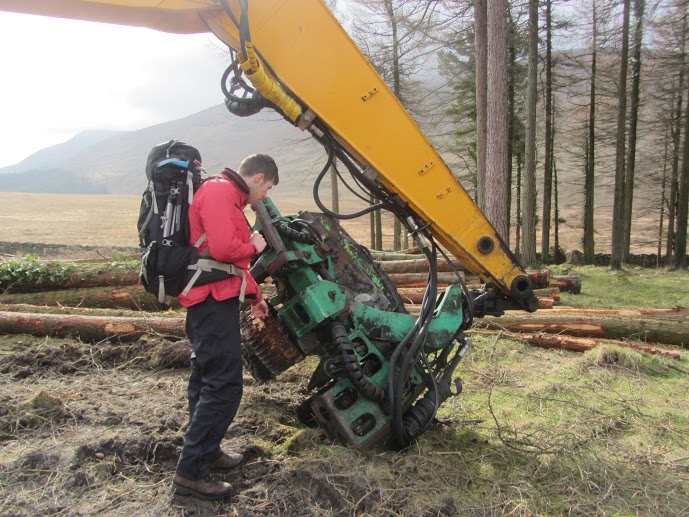 I’d be lying to say I slept soundly, although I felt warm and secure in my tent as the wind blew and gusted very loudly outside. I woke several times, turning over and falling asleep again before finally getting up around 8am. I gave the lads a breakfast call and we quickly fired up the MSR stove and enjoyed porridge and hot coffee. Armed with tripods, cameras and food we intended on exploring Tollymore forest as well as capturing some footage of outdoor kit we’re currently reviewing. On entering the woods again we discovered that some trees had indeed fell last night and were not blocking off the path leading downhill. Recently there has been quite a bit of deforestation in Tollymore probably due the Tree disease(There are outbreaks of both Japanese Larch disease (P. ramorum) and Phytophthora lateralis (P. lateralis) in Tollymore Forest Park.

Along the track mighty machines stood with huge mechanical chainsaw arms that rip, saw and stack the timber. 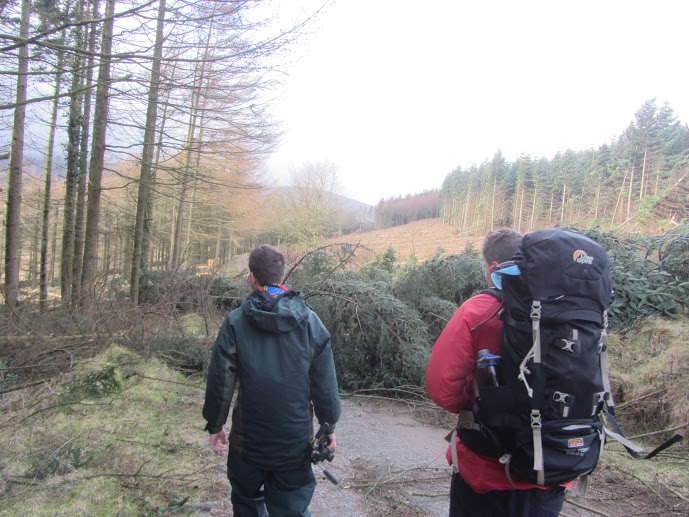 Trees that blew down

Ed wanted to photograph a waterfall so we made our way towards Cascade waterfall where the water pours between granite towers into two levels of pools below. Now deep in the valley last nights wind was only a memory and we enjoyed calm conditions, as the warmth of the rising sun could now be felt. 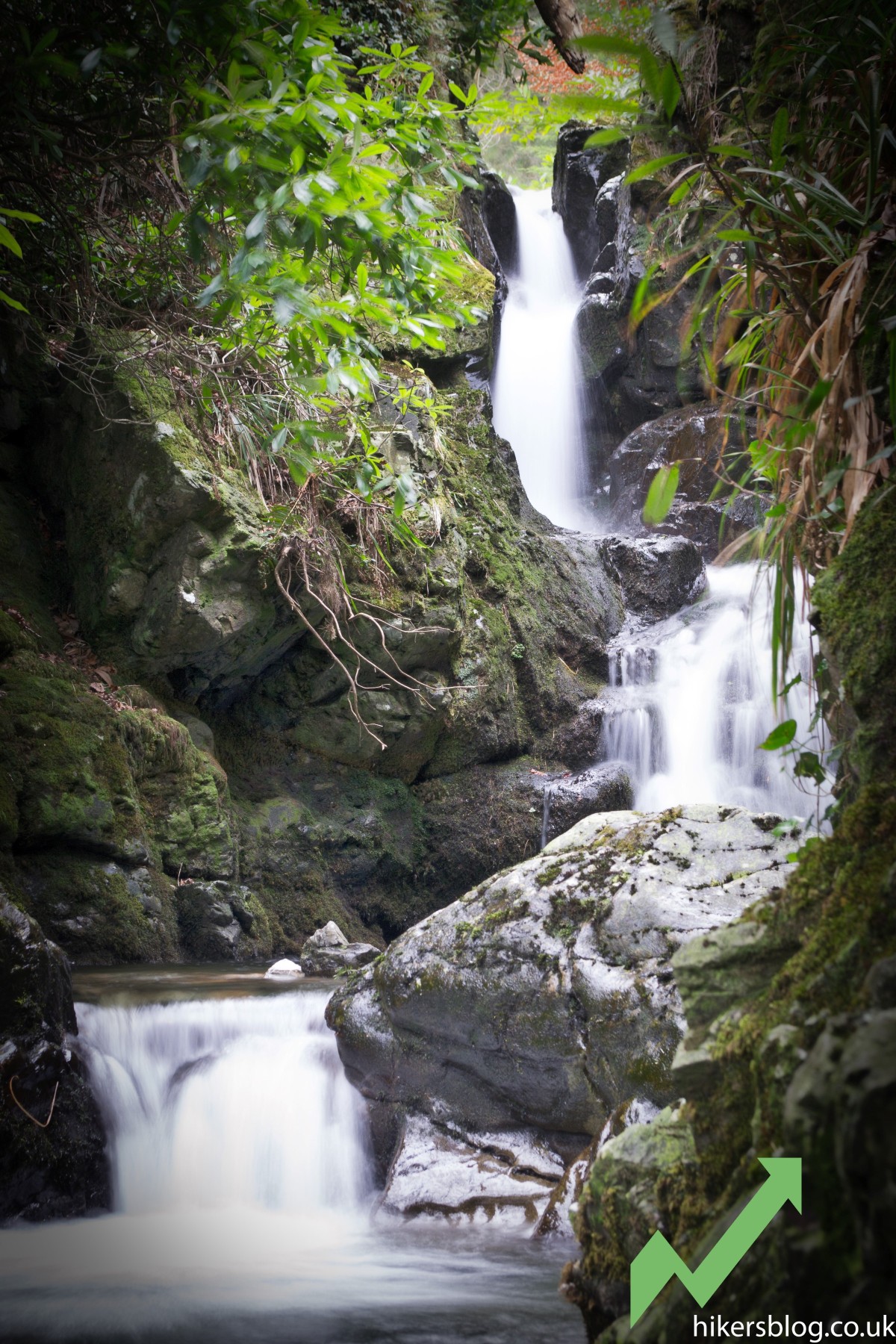 Next it was onto Parnell’s bridge, which spans over the Shimna River where we worked on underwater video fottage and long exposure photography. Anybody who’s ever visited Tolymore forest park will remember the stepping-stones a favourite place for kids who like to impress their parents by bravely crossing the stones to safety. The forest was indeed busy with people enjoying their walks. Having carried provisions with us we sat back and relaxed on a snowdrop slope enjoying hot beverages and warm lunches and snacks discussing the politics of life. 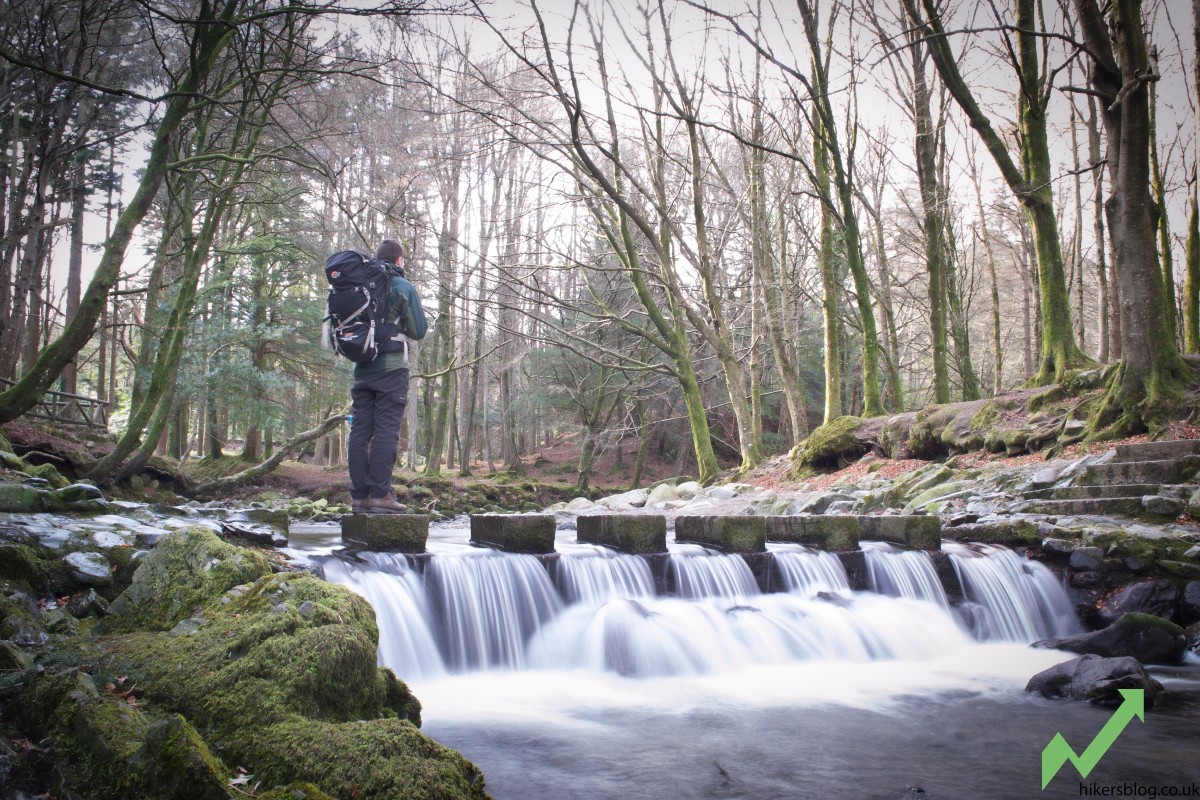 It was around 3pm and we began to slowly making our way back towards our camp taking a different route, which rises slowly up behind one of the Drinns where our camp was. Reaching the high ground again we were reminded of the wind that greeted us once again. Having spent the day exploring Tollymore forest we were glad to be back at camp. We all just rested around camp for some time until Eamonn turned up once again hauling yet another supply of steaks, ribs and sausages which we consumed before gazing up towards the night filled with stars. Joining ed on taking long exposures of the night sky as I corked a nice bottle of red wine and savored in the moment. I definitely slept better the second night probably due to my slightly intoxicated state and my fill of great food. I awoke the following morning to beams of sunlight and quickly set about getting some coffee. 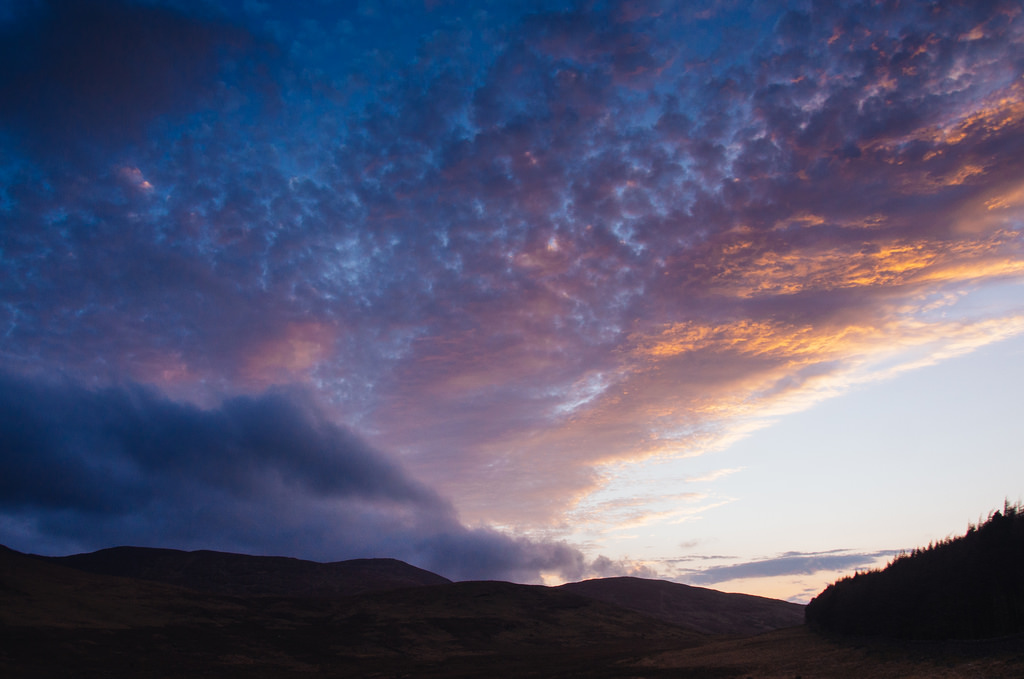 sunset from our camp

After breakfast we again worked on some video footage before setting off down towards Newcastle as the rising sun warmed our faces. It had been a very enjoyable weekend camping, spending time with friends and exploring wild places. 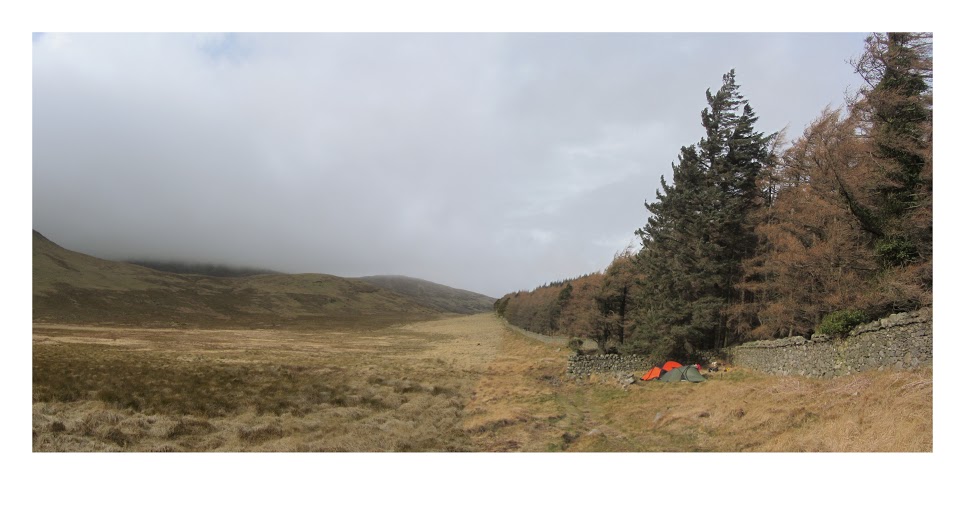 Prints are available of some of the images featured in today’s article! Choose a framed print, canvas and more with delivery worldwide. Click to see more