On reaching Slieve Muck’s summit trig point, which had suddenly appeared from the thick mist, I remember thinking, “Is that all you’ve got?” I really had expected a harder gruelling hike onto Muck. 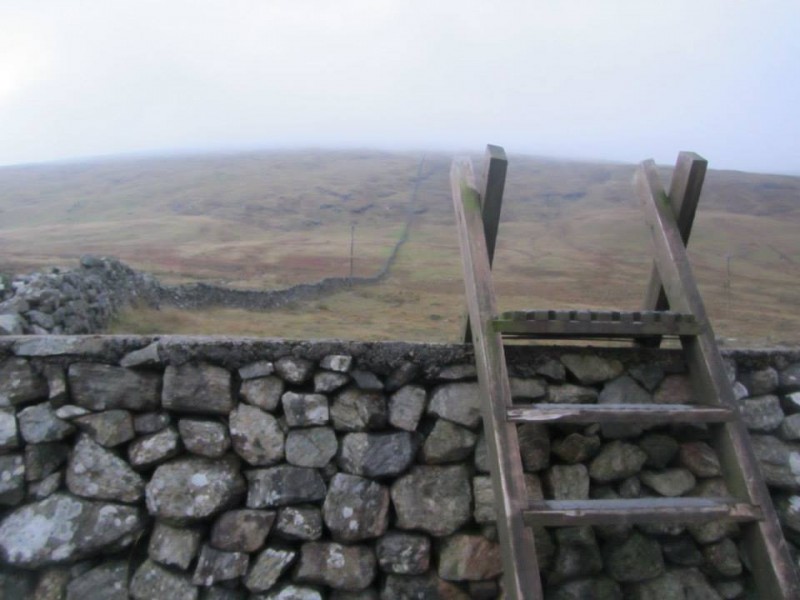 Setting off from home at 6am, I had been somewhat worried about our hike ahead.
We had arrived at our starting point,Ott carpark, just shortly after 630 am. Our planned route would include starting at Deers meadow & following the wall to mucks summit, before again using the wall and contouring down onto Carn, before dropping down the Ott track to the car. 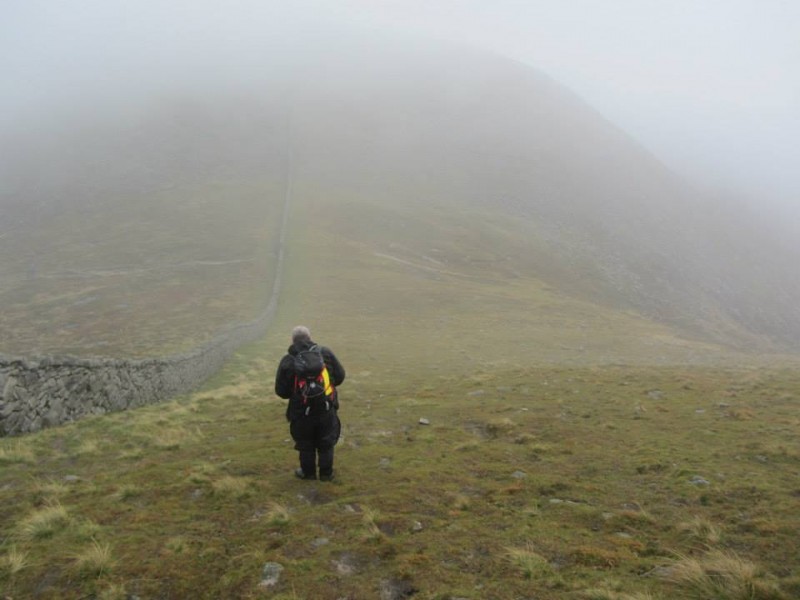 So, having reached our first summit of the day on fresh legs, we quickly decided more mountains & pain was required, in order to make this a proper walk. Having a quick look around the summit, it was clear we weren’t going to be rewarded with any spectacular views today. Ah well, sometimes it’s just nice to push your comfort zone and put in a good hike! Using the mourne wall as a wind break,we settled down behind it with a brew and some homemade trail bars. 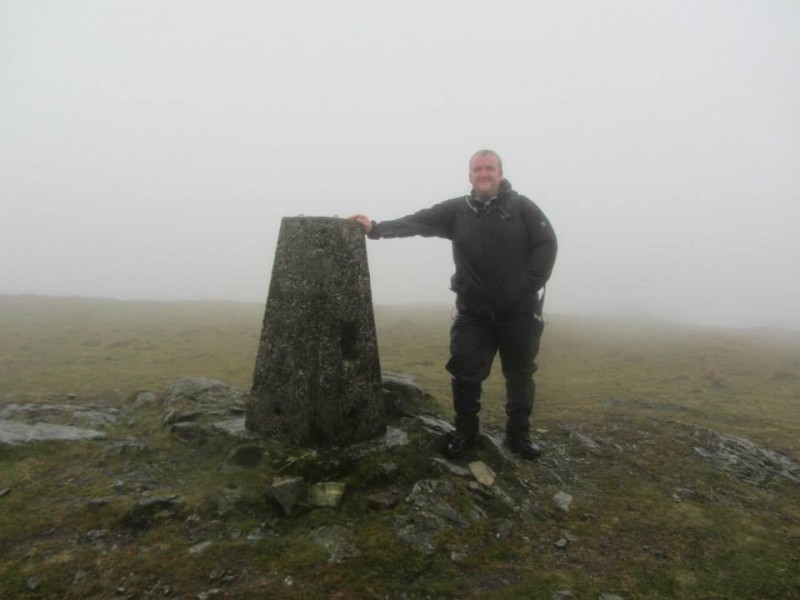 Leaving muck, the weather closed in on us, but we felt comfortable following the wall, which is a great navigational asset to any hillwalker venturing into the Mournes .

Every once in while, we were given a glimpse of mountains in the distance, as the heavy curtain of fog lifted, showing what amazing views we were missing.Having now reached the Ott track, it was a matter of putting our heads down and pressing on, tackling slieve loughshannagh first, before descending its other steep face towards slieve Meelbeg. 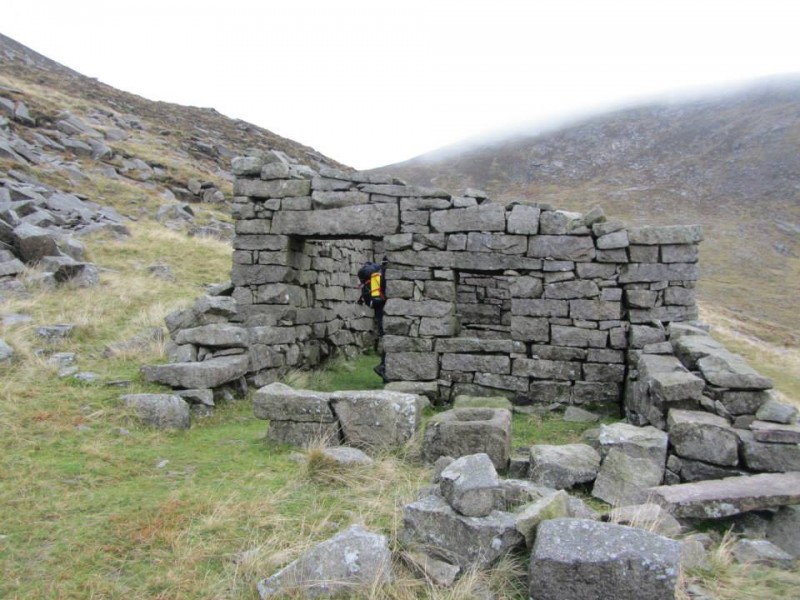 At this point, my legs were beginning to feel the effect of the walk so far, but in a rather masochistic way, I was looking forward to the pain! As we ascended, a heavy mist bank covered the climb ahead,something I was glad of, as it kept us thinking we were nearly there.

Meelbegs descent was quite easy, and soon we arrived at the Meelbeg/Meelmore col. Taking our last few paces toward the stile, we noticed three hikers having a map check before crossing the stile towards us. We exchanged planned routes while complaining about the weather, before separating and going our own way. I remember saying to spud, “Did that guy say he was walking towards the Trassey track?” glancing back as the three walkers disappeared into the fog towards Blue lough. “Maybe I heard them wrong” Descending down the valley, we decided another brew was in order before we made our way down onto the Mourne way, and back to our starting point at Ott carpark. 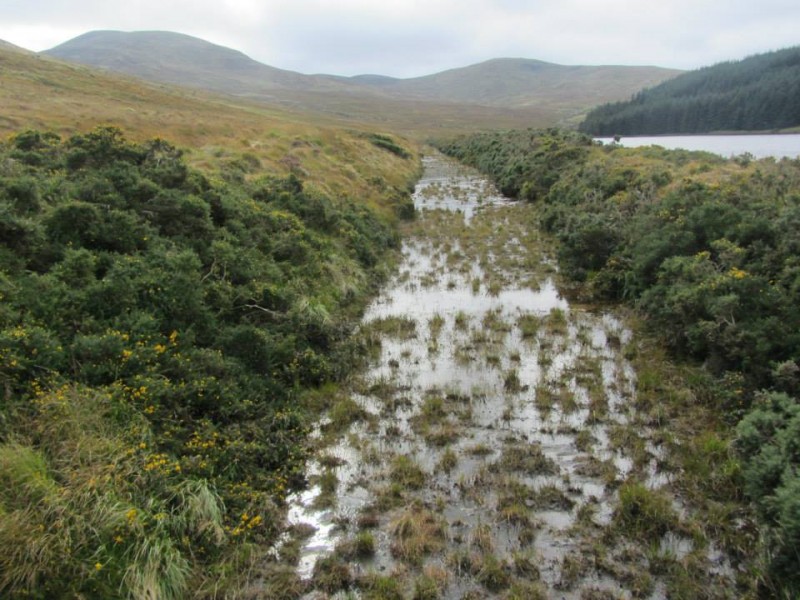 Having trekked this valley before, we knew an ideal place to stop was an old roofless stone building, used by the folk whilst constructing the Mourne wall. Settling down with our second brew of the day, I heard voices coming down behind us. It was the three hikers we had met at the col! Having climbed Slieve Meelmore, they had mistaken their descent route, and followed the wrong wall down to what they thought was the Meelmore /Bearnagh col! Navigation is not something you learn and know forever, it’s something you have to keep working at. After a quick map check with the hikers they realised their mistake and how easy it was to make. To be fair I have made the same mistake myself in the past and learned by it. It is one thing making a mistake and another thing correcting it and learning from it. At least the three hikers had realised that something was wrong with the terrain, and had not been afraid to ask advice. With them feeling somewhat more happy with their onwards route, we parted company again.

Leaving the comfort of the stone building, we continued on down the valley before crossing the stile at Happy valley and onto the Mourne way, which brought us to Fofanny dam and our starting point at Ott carpark.

Reaching the car, I felt happy that we had pushed ourselves more than we had planned, ok the weather was poor, with little views, but our spirits were fit to bursting, from yet another splendid day in the fantastic Mourne Mountains. 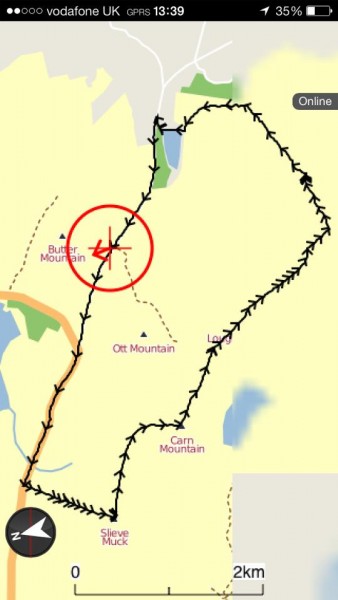