It was 7am as we took our first steps from Dunnywater,the sun was already high and hot but thankfully a cool crisp breeze could be  felt from the Irish sea.

Yesterday Spud and his brother Chip joined me for a ten mile trek in the Mourne mountains .I checked the weather forecast before heading off and it was giving it to reach 20 degrees celsius. With that in mind I packed plenty of fluids, sun cream and bug spray. Our trek began at the old water board gates located on the Head road just before Carricklittle.Following a way marked way we followed a track through Dunnywater woods crossing three stiles as we went. It was 7 am as we took our first steps from Dunnywater, the sun was already high and hot but a cool crisp breeze could be felt from the Irish Sea. 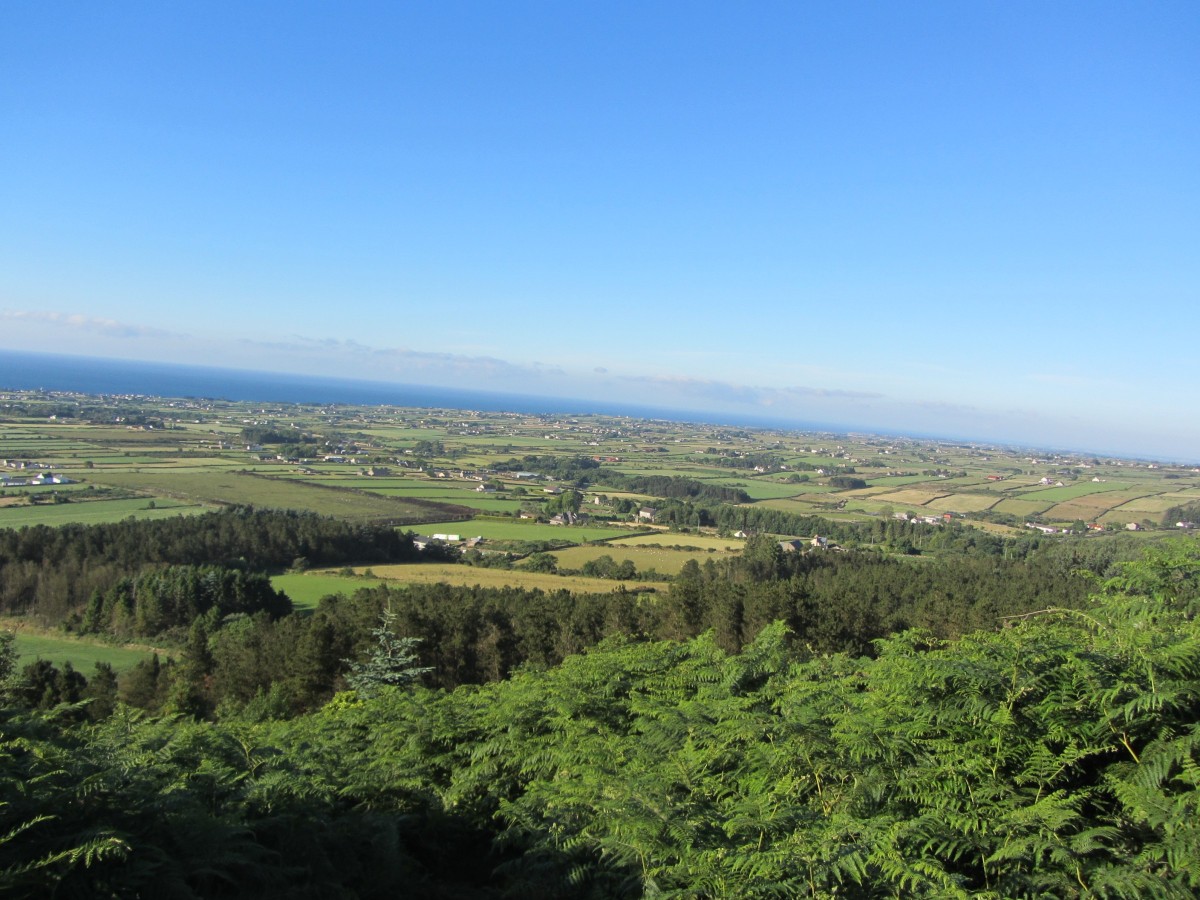 A jungle of fern

Leaving the comfort of our woodland trail we made our way through a jungle of fern before finally reaching a boundary wall, which lead us to the Mourne wall. A large ornate cornice of granite marks this area with a majestic view towards Binnian, Lamagan and Annalong valley. At this point we needed to gain some height so we followed the walk along Long Sefin before starting to contour across the valley towards Chimney Rock mountain. 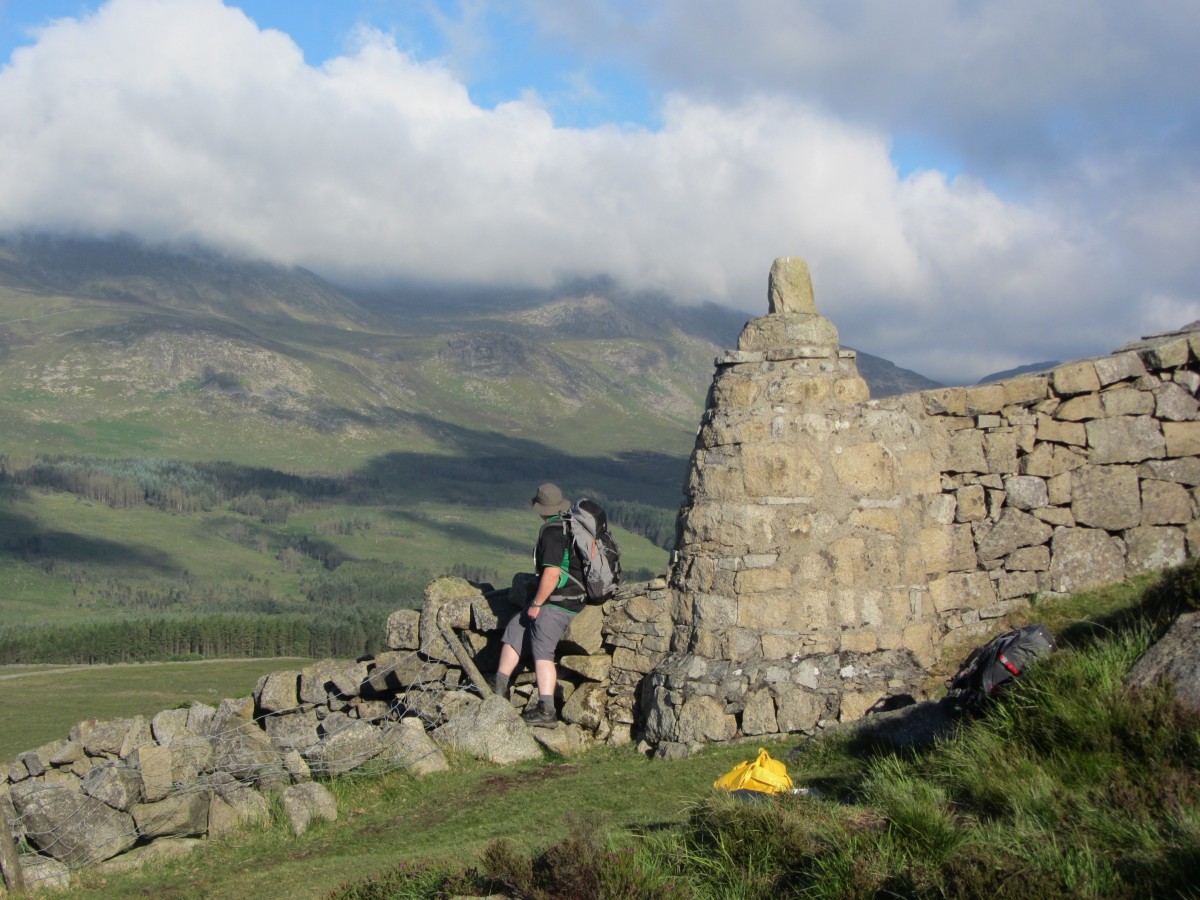 The last time spud and I trekked across this area we spotted some abandoned farmhouses, which we agreed would be very interesting to explore. Crossing a small stream we made our way along an old disused farm track towards a cluster of farm buildings. 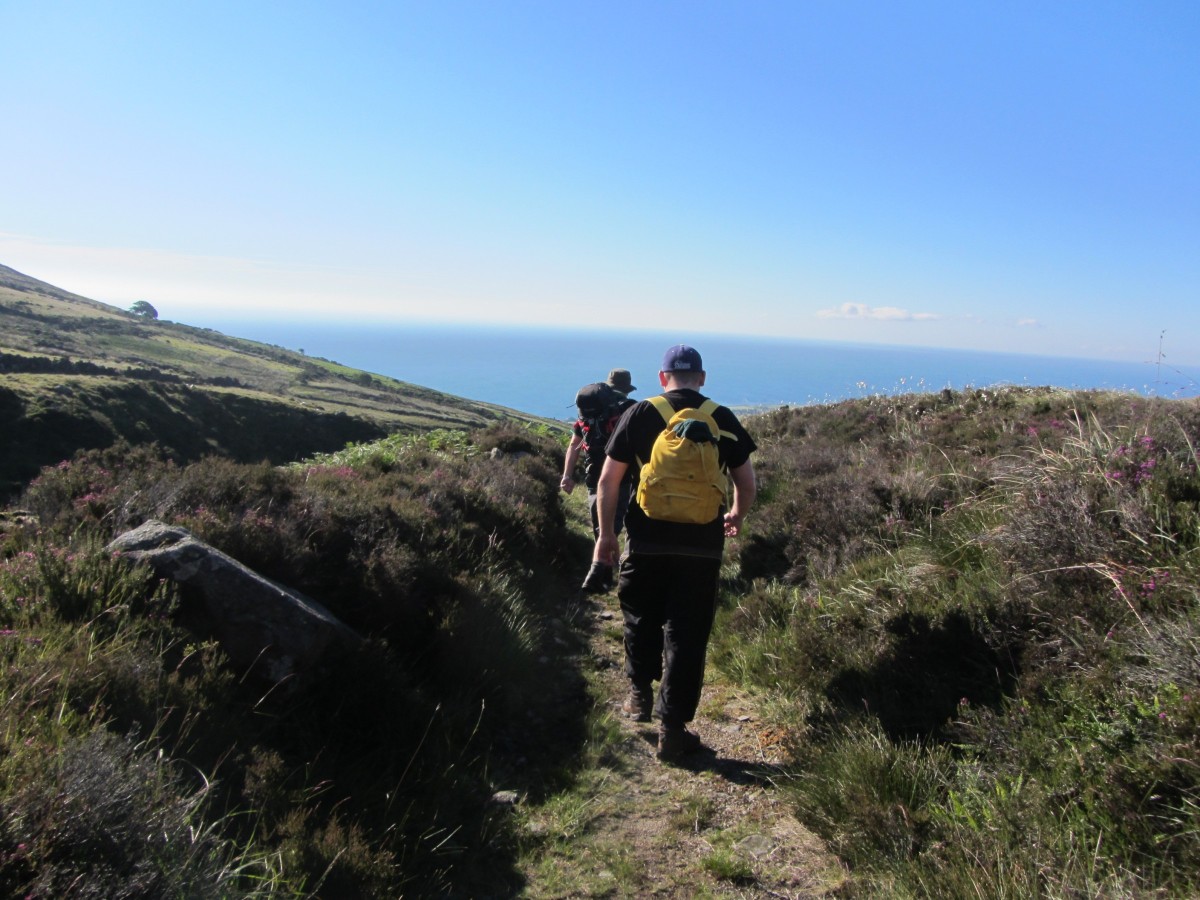 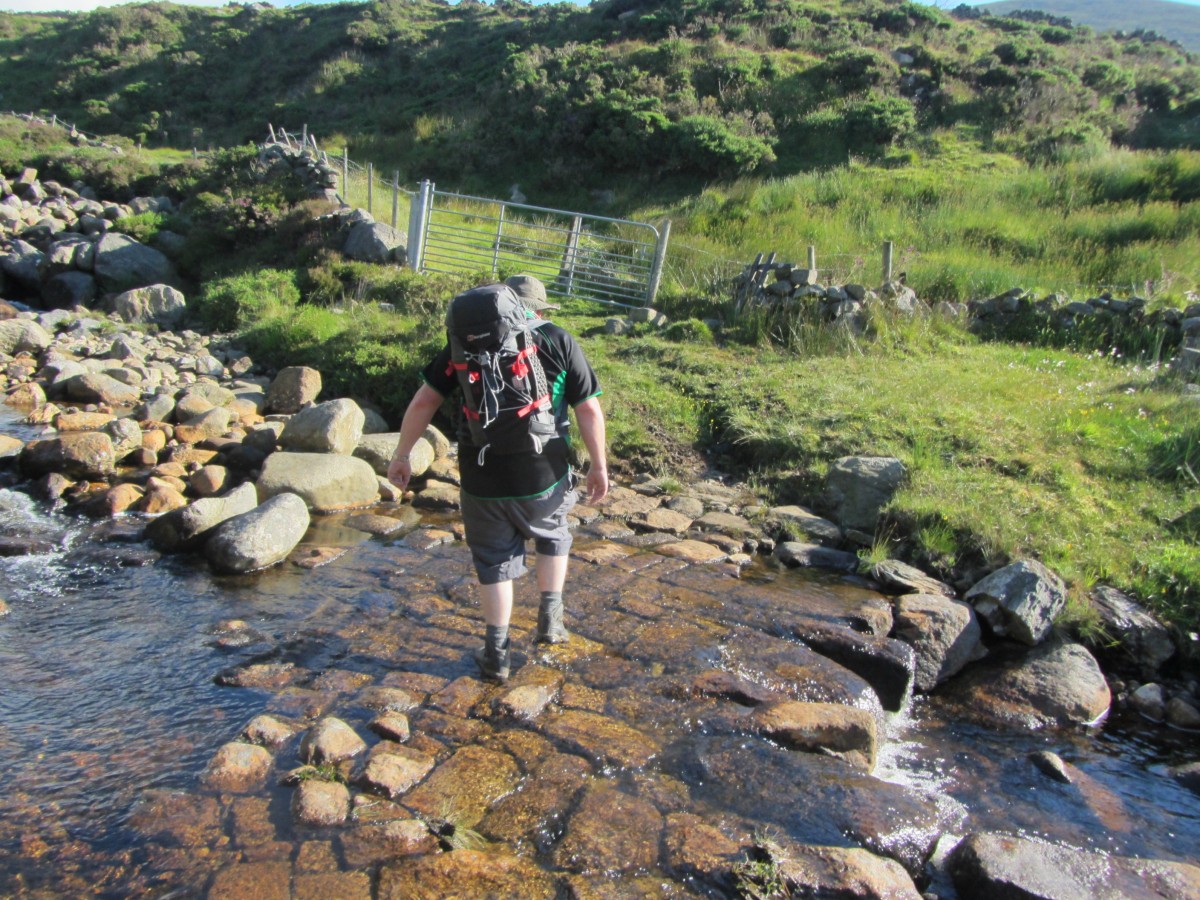 A range of mature oak, ash and sycamore trees cloaked the buildings. We discussed the reasons the buildings were abandoned. Was it a case of modern farming techniques or sickness? Like most small holdings it was probably a case of hardship, but I guess we’ll never know. 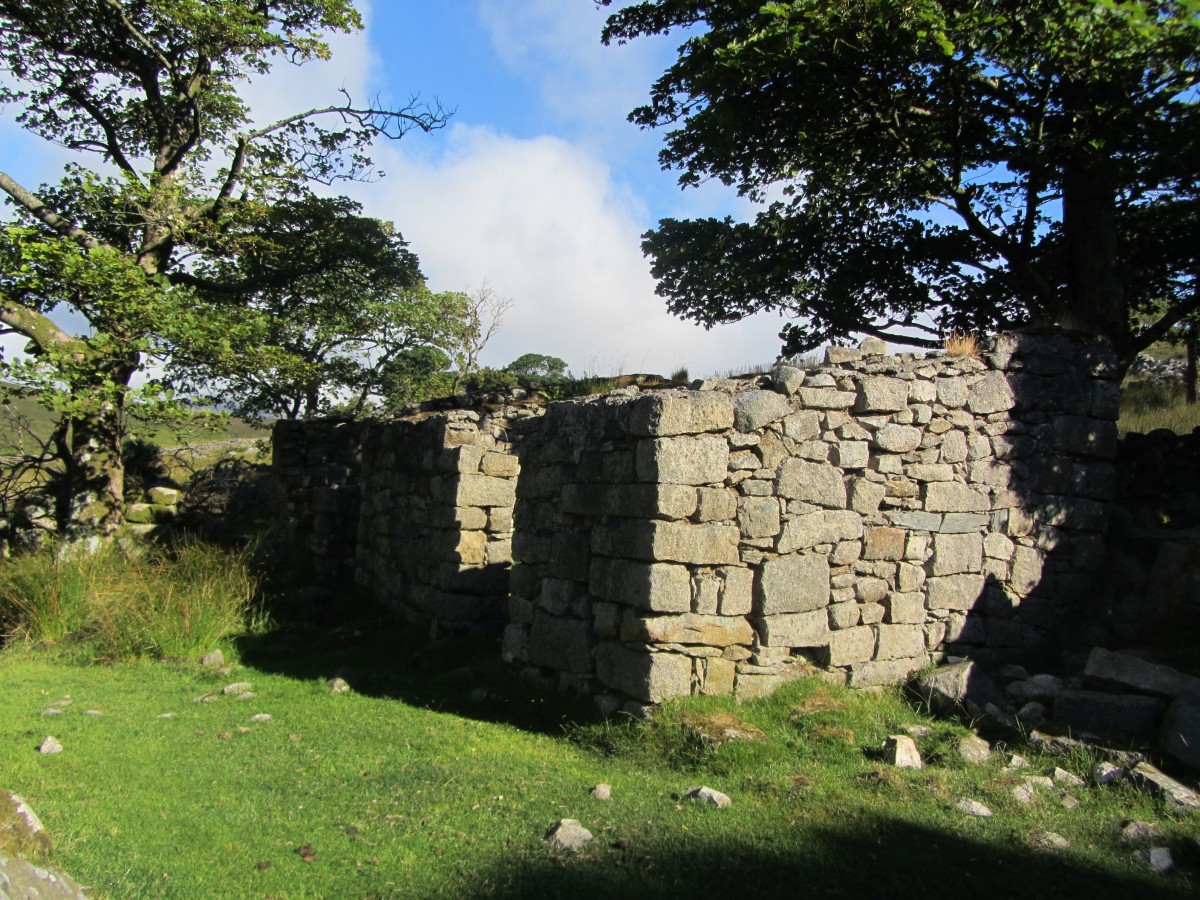 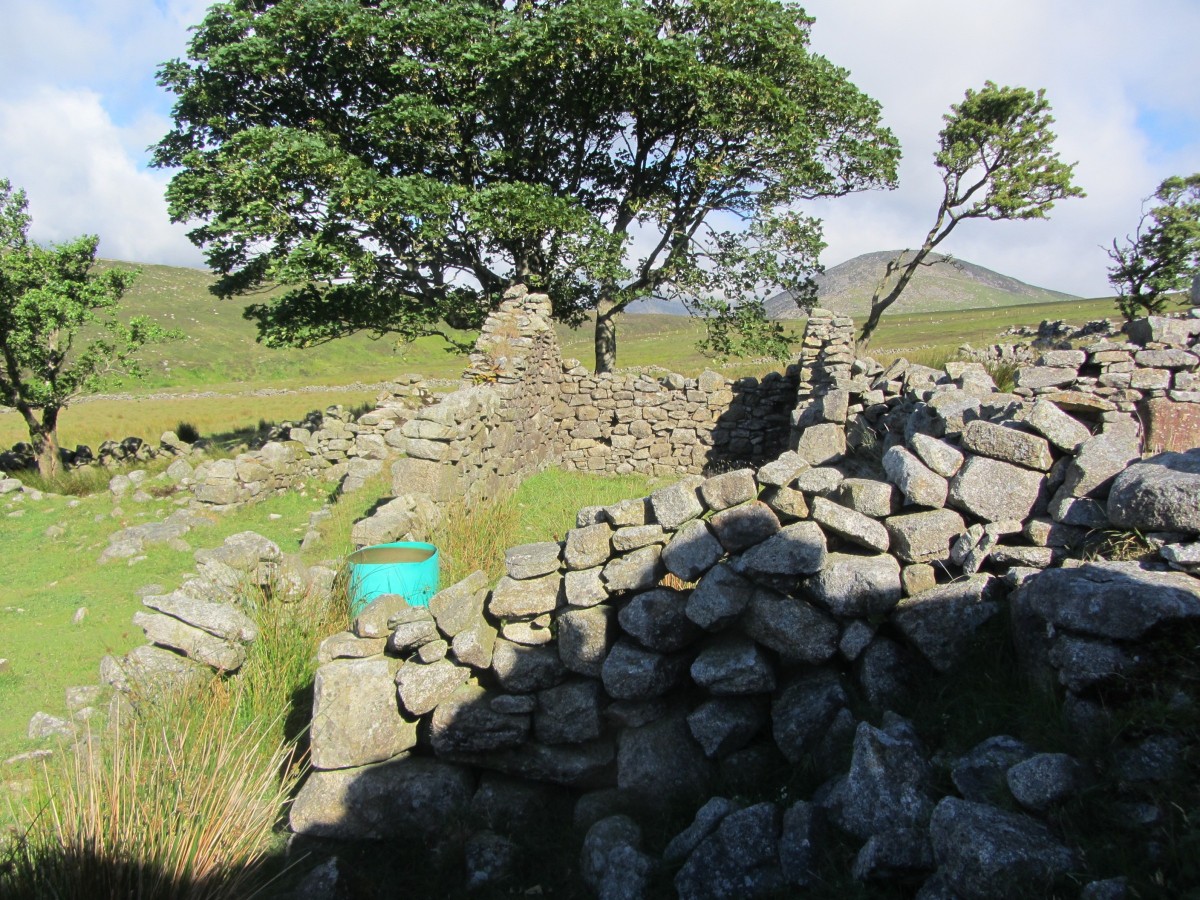 Leaving the mysteries of the past behind we continued to slowly contour along the valley below Chimney Rock Mountain. On our last adventure in this valley we had discovered the ruin remains of a plane wreckage from World War II, alas today we could not find even though we spaced ourselves across the valley. 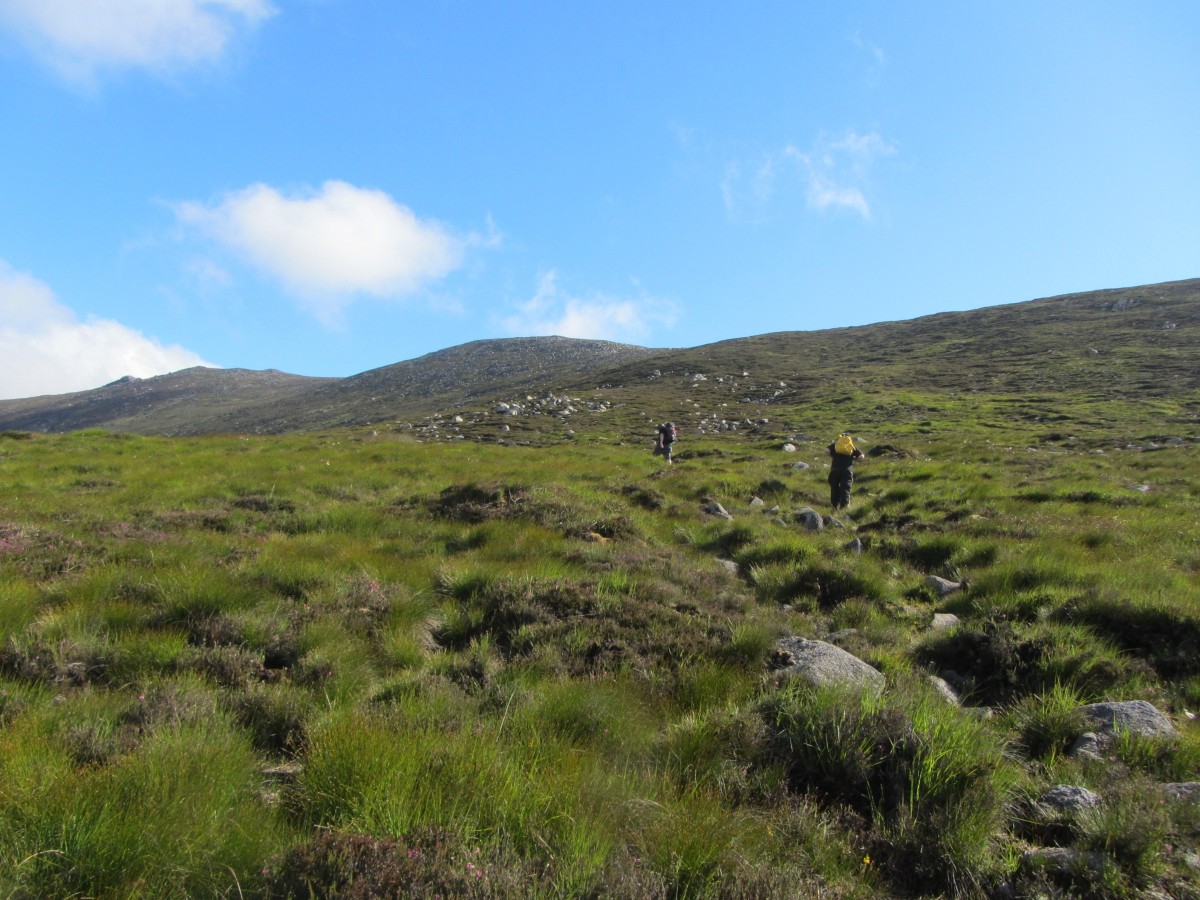 Stopping for lunch in an old animal holding we took a much-needed rest and sheltered in the shade of its walls. 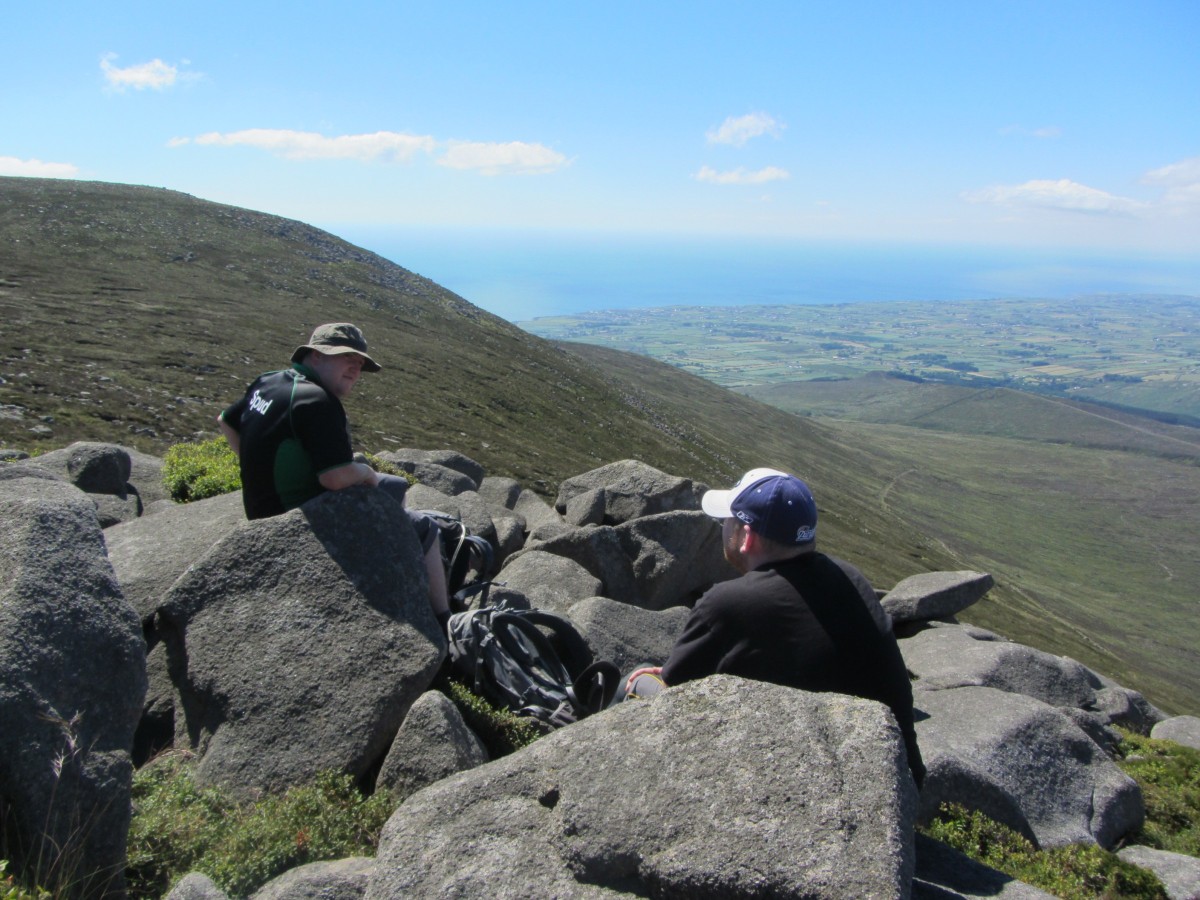 Having refueled ourselves we now faced the steep ascent onto Chimney Mountain, the going was tough and at times we had to scramble over boulder field and knee high heather. As I reached the summit I was greeted by Spud, Chip and a fresh summit breeze. Chimney Mountain itself is crowned by amazing summit tors, which I carefully scrambled onto. The views all around we outstanding with the Cooley mountain range behind and Dundrum bay far below. 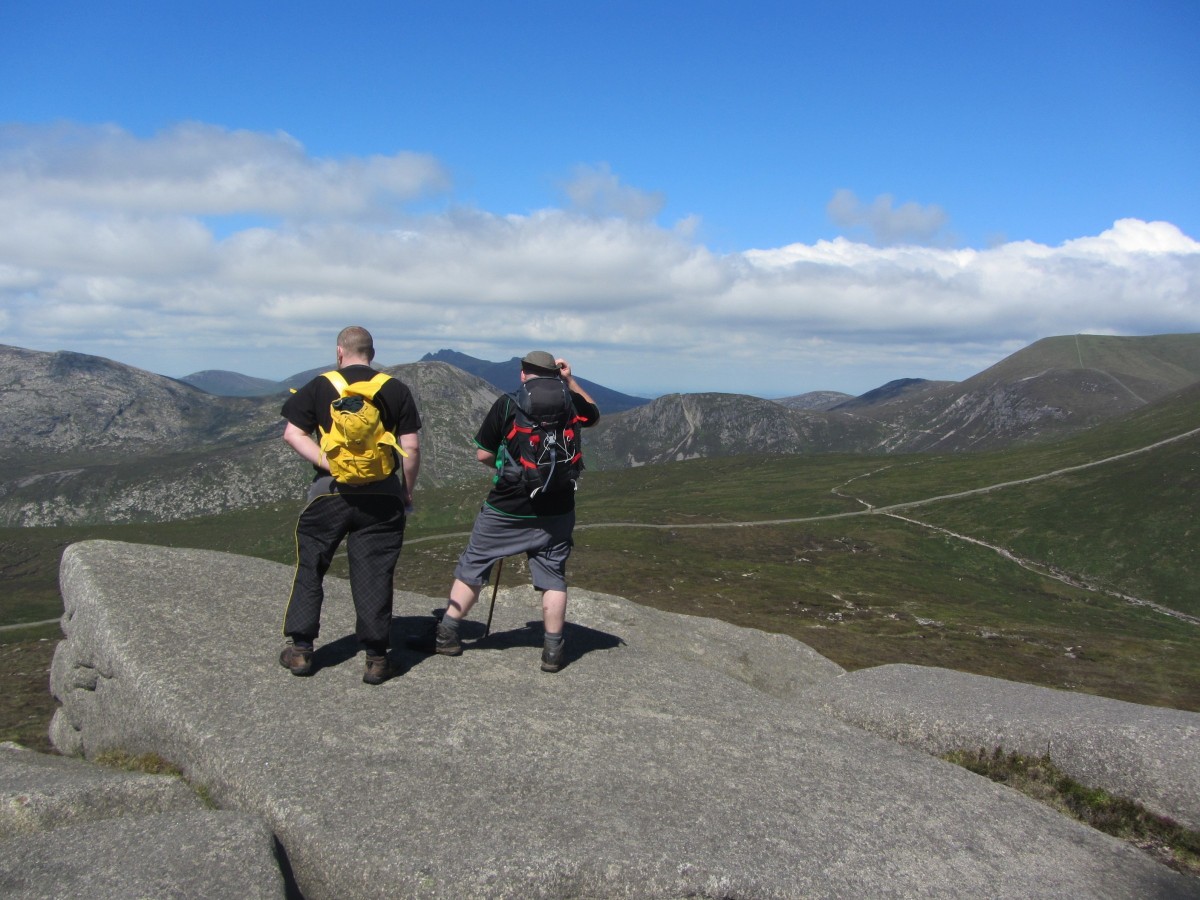 Outstanding views across the range 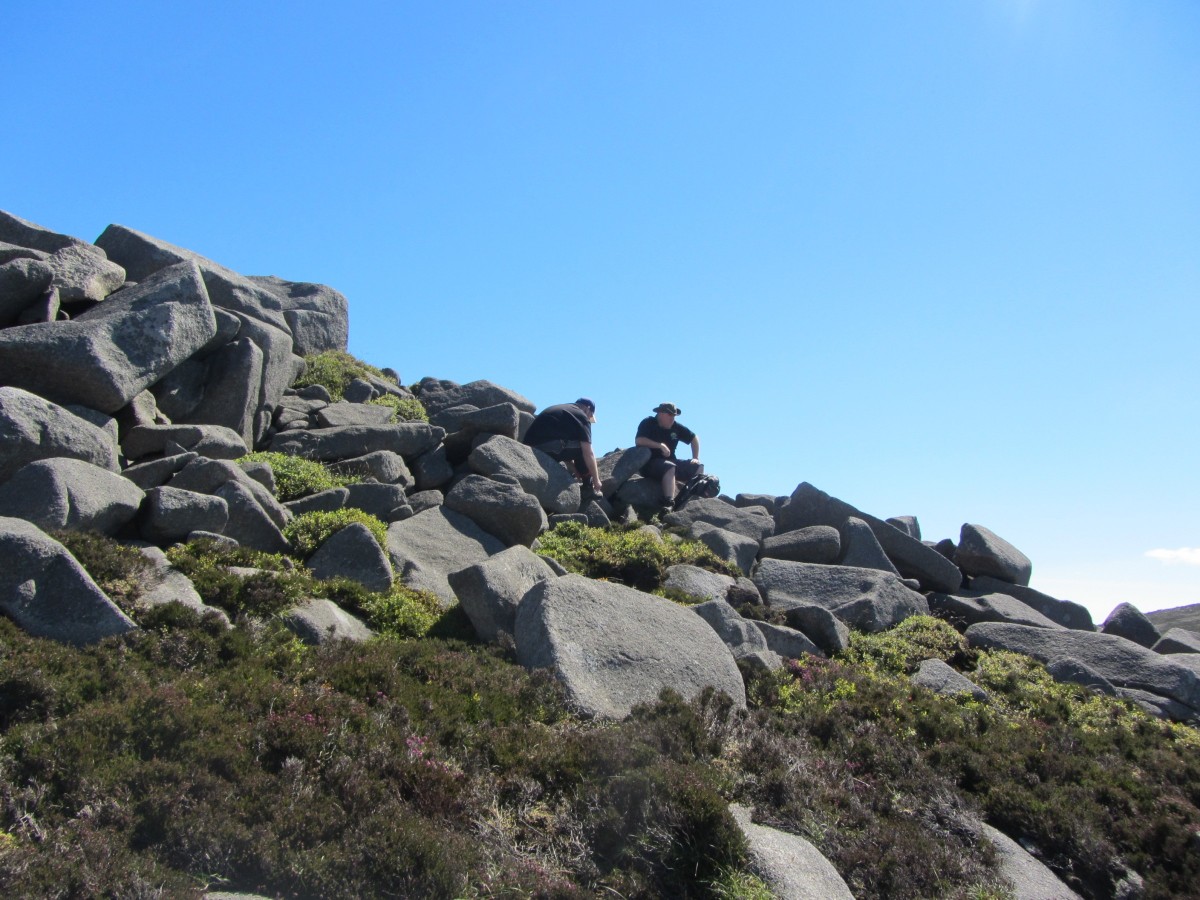 Next was the steep descent down to Carr’s face, which was once a quarry with a railway and winch that lowered the cut granite towards the valley floor. After some time we reached the bloody bridge track where we turned left towards the Donard / Chimney col. The sea breeze that kept us cool most of the day had now left us, replaced by a boiling hot day. 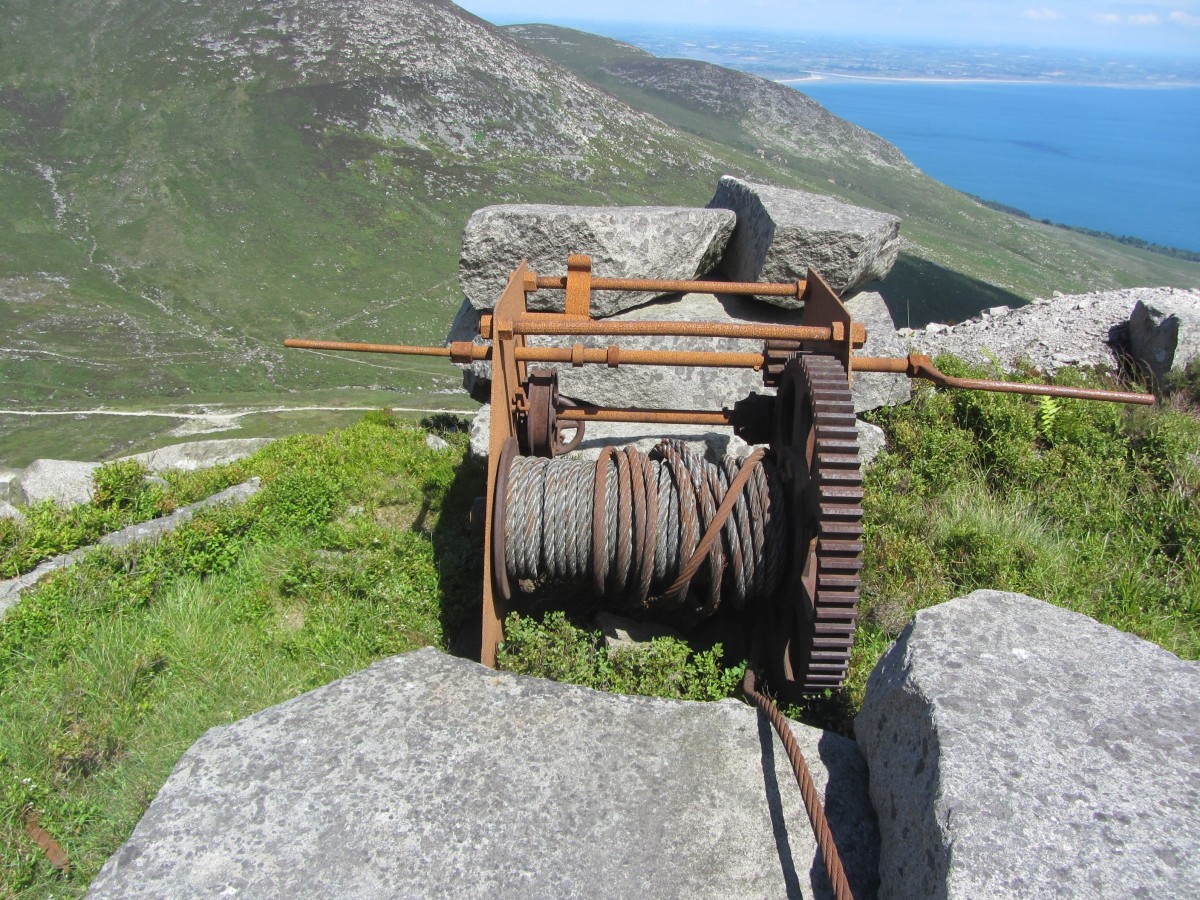 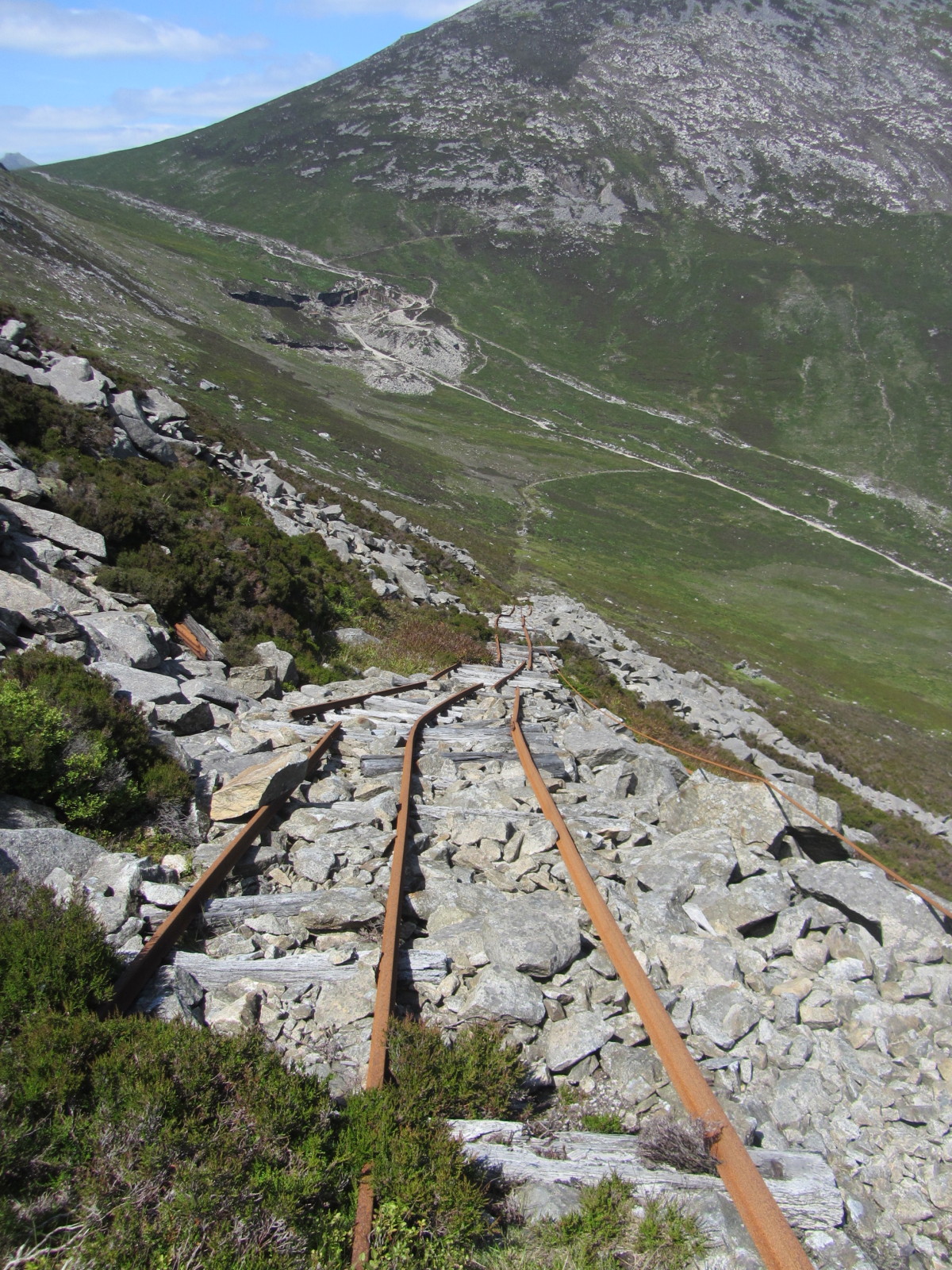 After some time we reached the col and turned south passing over the bog of Donard.this section of the Mourne wall is nothing short of spectacular reaching 16 feet in places. 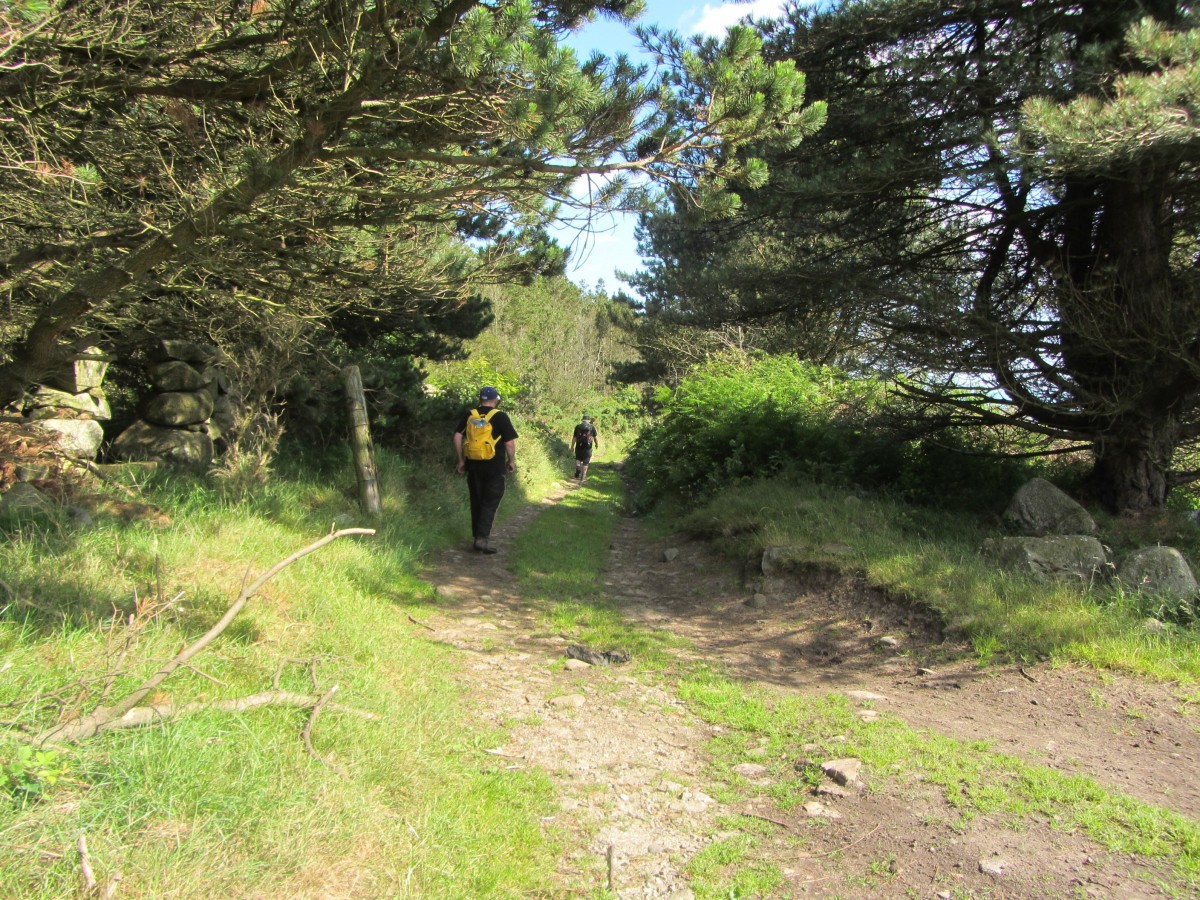 We followed the wall back to long Sefin where we followed an old stonemason’s track in Dunny water woods again. We now walked along an old lane for what seemed forever through dabbled light and sweltering heat. Reaching the car I was glad to remove my boots, we had been in the mountains for over nine hours now and enjoyed every single minute of it. 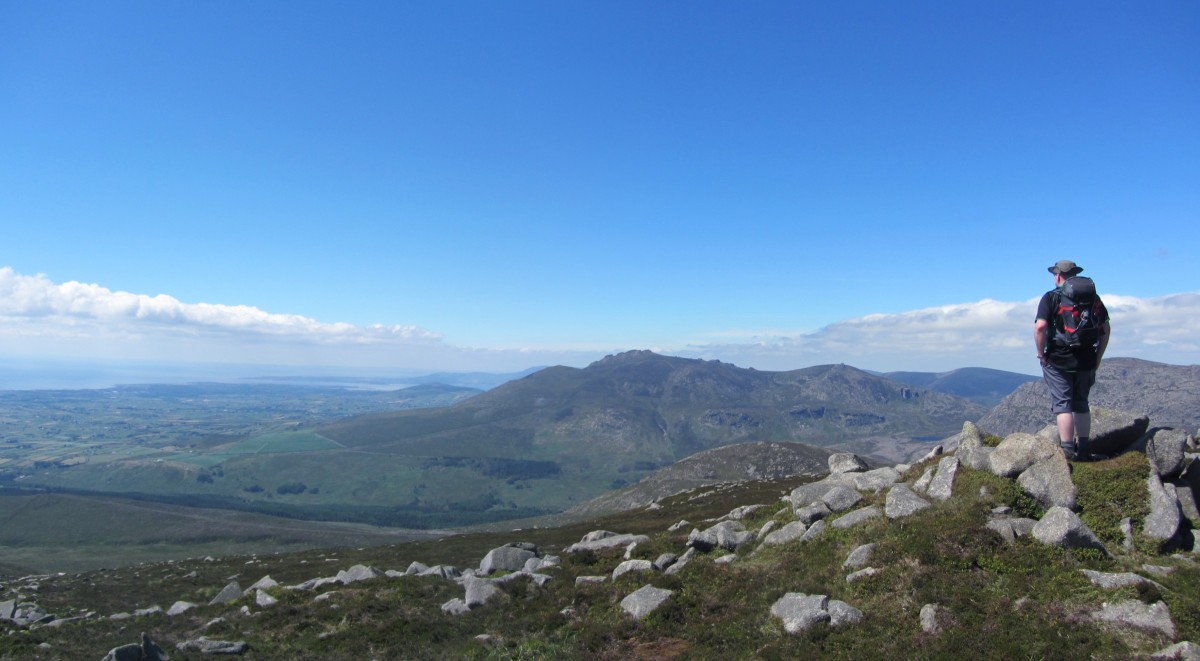