As we made our way up the path to the Lamagan/Binnian col, the rain started to get heavy again, the stinging droplets working their way through my already sodden jacket, wicking its way through the layers beneath, til its cold touch found bare skin. Apart from the odd cold spot though, the hike up the side of the mountain was keeping the blood flowing, and I felt good.

It was a rainy Thursday in April, and though we should have been seeing spring in its first flushes, frozen snow still clung to the peaks of the mournes, last bastions of icy whiteness, the cold mountain air enabling their resistance to the spring suns advances over the last couple of weeks, and from the fresh assault of the heavy rain which had been falling for hours.

We had started our trek in relative dryness, making our way up the carricklittle track, which we had left at 7 am.  The plan was to spend all day in the hills, with a circular route which I had wanted to attempt for a while. Up the carricklittle track following the mourne wall, then hopping the wall and making our way around the abandoned stonemasons village on the lower slopes of Binnian, then contouring our way around through the village for a spot of exploration. Afterwards, making our way down to Silent Valley reservoir, up the valley to ben crom dam, up to the aforementioned col,  and then back down the track past annalong wood to the carpark. 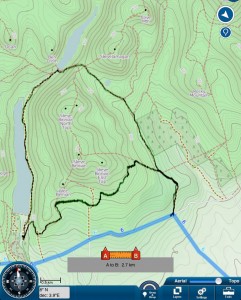 The forecast had been grim all week, so it was nice to start the walk without getting soaked, although from the cloud cover which was smothering the hills, we both knew that the rain was on its way, it was just a question of when it would make an appearance, so we donned waterproofs from the word go. As it happened, it turned up just when we crossed the wall, we didn’t get much of a reprieve, although it was just fine drizzle to start with.

We weaved our way through the abandoned stonemasons village on the lower slopes of Binnian using the tracks that were already there, the mirk and mist adding to the atmosphere of the place. You could almost hear the clang of the hammers on the metal plugs, as huge slabs of tough mourne granite were skillfully split into kerbstones, lintels and building blocks.  We spent a while exploring, speculating on the buildings previous occupants and the tough work they undertook. A quick tea break in one of the abandoned buildings and on we pressed. 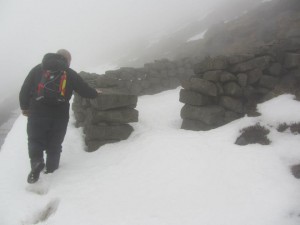 Our plan was to make our way round to the mourne wall, and follow it down over wee binnian and moolieve, and we followed the tracks of the village towards that end. As it happened, the track we took brought us right the way around wee binnian, which we hadnt even got a glimpse of, due to the poor visibility. The rain had been falling heavily now for a couple of hours, and combined with the cloying mist, had been saturating us as we made our way through it.

We arrived at the silent valley park and were drenched by that stage, so both agreed that a lunch stop was in order, preferably somewhere sheltered to get some respite from the rain. We had been looking forward to some sarnies and a flask of tea before we got there, but as we approached, the smell of home cooking assailed our nostrils! A quick decision to give the cafe a bit of trade was reached, and in we went. We must have looked a sight to the woman behind the till, as we dripped all over her floor! 2 steaming bowls of soup and a pot of tea later (very welcome, but not cheap at £10!!) and a quick look around the interactive exhibit at the park (well worth a visit, especially for kids) detailing the history of the mourne waterworks and the construction of the dams, and we were on our way again. 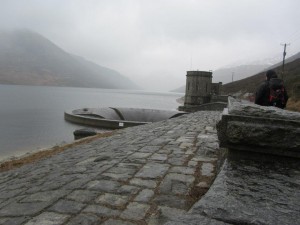 The break out of the rain had  put a new spring in our step, and as we quickly progressed up the side of the reservoir, I wondered if any of the granite which made up the intricate walls and stonework of the mighty reservoirs grounds,   had come from the quarries and huts we had visited earlier. We reached ben crom dam, its 200 foot high, 700 foot wide bulk holding back a staggering 1700 MILLION gallons of water! 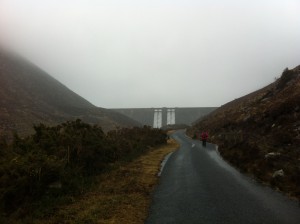 It was full, white water cascading down its twin overflows, the roar of the water reverberating around the valley. We climbed the 270 odd steps to the top of the dam, and took in what view we had with the ever present cloud.

As we had progressed to here, the rain had abated somewhat, but as we set off from the dam, it and the wind both picked up again with a vengeance. 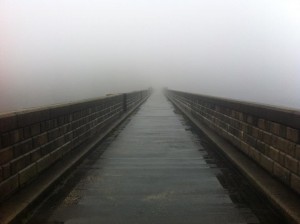 We made our way up the newly constructed pathwork done by the mourne heritage trust, and it was a real pleasure to use, the gradient set well, so that we could gain good height without having to do too much legwork, and we climbed quickly. It is still a work in progress, and I for one appreciated the work put in by countless hours of volunteer work.  As we gained height we found ourselves at first back on the older track, and then lost the track altogether due to some large areas of lying snow! We picked our way up, kicked our way up a snow bank, and found ourselves approaching the Binnian/Lamagan col. 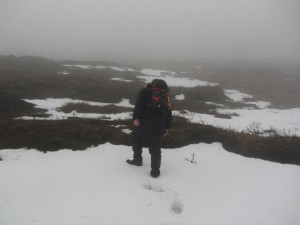 As we reached the col, the wind and driving rain racing up the valley ahead of us, and would be in our faces the whole way back to the waiting car. We knew it was all downhill from here though, and it was hands in the pockets, heads down and a brisk tramp from then on in, reaching the end of our trek 9 hours and over 11 miles from our early morning start, soaked but happy.

You can pick a day for a walk, but you cant pick the weather, and if you are waiting for a good days weather to explore the hills, then you might be waiting a while in this country! So get the waterproofs on and get out there!