Home High above the street lights

High above the street lights

It’s not every day that your faith is restored and rewarded by a magical walk through the mountains, but Tuesday was one of those days.

With just a few hours of work left, I smiled with glee at the adventure we had planned for ourselves that evening. Customers commented at how happy I was, but they were unaware that I had the mountains on my mind, and a healthy workout in natures gym. 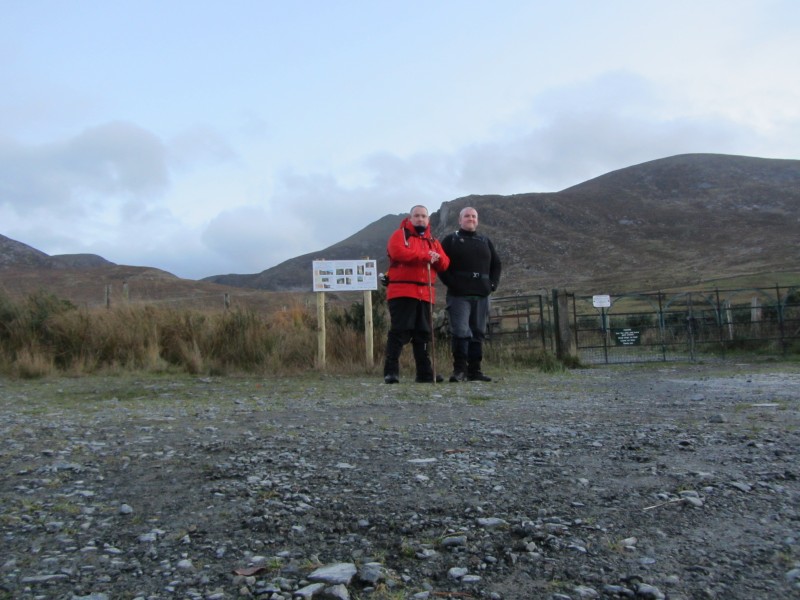 With plenty of forward planning, and time at a premium, I had all my kit waiting and ready to go from the previous evening. In the door from work and changed, I just had time for a quick chicken sandwich before Spud’s now familiar car horn could be heard outside. I grabbed a cup of vegetable soup to drink on the go, and off we went. Knowing that Spuds better half needed the car that evening, we planned our route knowing that we had around five hours to make the last bus home from Newcastle at 10.10pm. We got our drop off at the Trassey track, and made our way along through the woods to the mountains. It was just before 5pm the sun was still shining in the sky, though it was making its way rapidly towards the western horizon. There was a cool crispness in the air, and we were eager to get going. We passed through the stiles, taking in the amazing Autumn spectrum of colours that the mountains offered up to us. 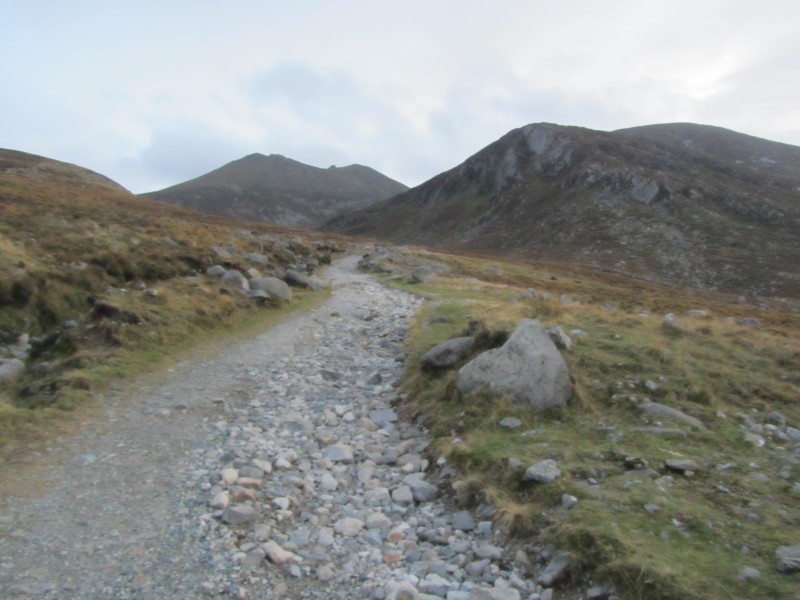 We had both agreed we needed to push ourselves just that little bit more from our comfort zone, to work on increasing our hill fitness. With that in mind, we increased our pace beyond what we previously had set, and it felt good. Following the trail that twists its way up Slievenaglogh, we began to feel the contours in the deepening of our breath and the muscles in our legs. I waited to feel that point where my legs insisted to me to stop, but it never came! With delight I began to laugh out loud, as I was seriously enjoying the feeling of pushing myself. With the last of the light quickly disappearing behind distant hilltops, we stopped to marvel at the setting sun, as it bled into the horizon. 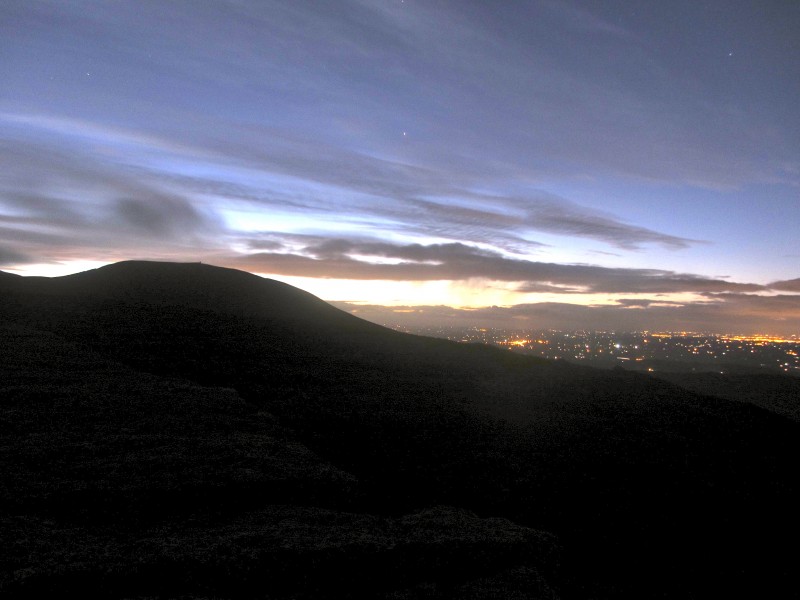 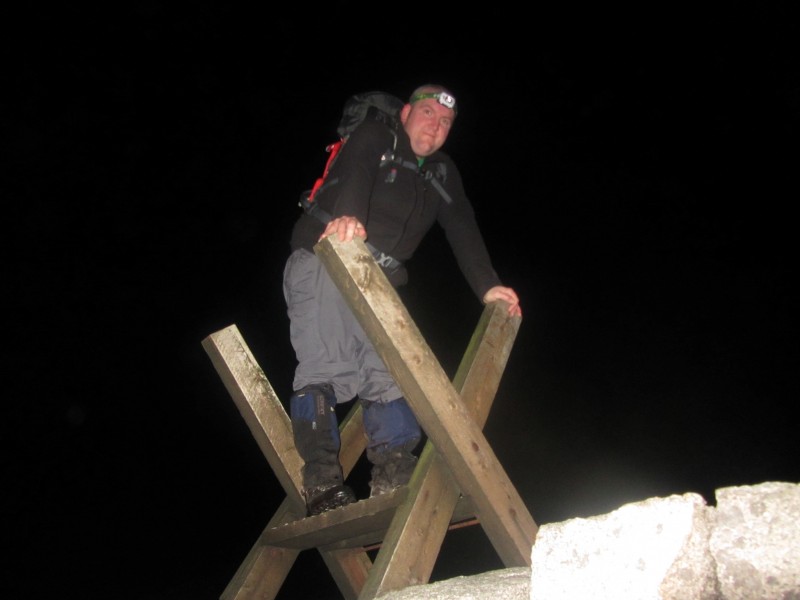 The section of the Mourne wall from Hares gap to slieve Commedagh is nothing short of spectacular, and I feel is one the finest examples of the craft of the stonemasons who built the mighty construction. Stopping for a few minutes at the stile to refuel with a chocolate bar, we felt the mountain air starting to cool our hard earned sweat. Quickly applying a new layer of clothing we pressed on, eating as we went. We were making good headway on our planned route, as we approached the twisted crescent mountain that is Slieve Corragh. Turning off our head torches, the palely moonlight sky revealed the surface of Ben Crom reservoir far below in the valley floor. All around us we could see the glow of habitation from the historical peninsula of Lecale. With Carlingford lough also visible in the distance, we felt privileged for the view as we stood in the dark, hundreds of metres above it all. 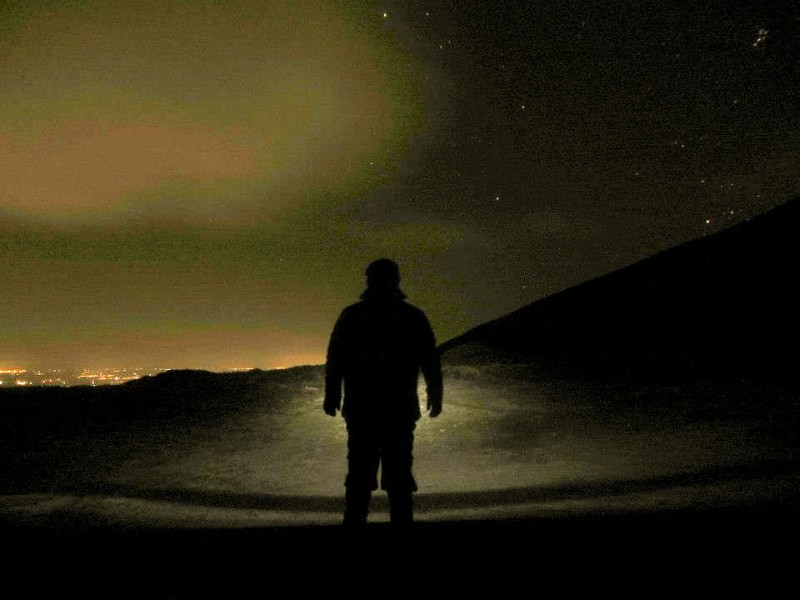 Our main ascent, Commedagh, was still ahead of us, so I held some energy on reserve for the final push up its steep bulk. As we descended Corragh, I stared at the dark mass that greeted us, the mountain appearing to gain in height the closer we got! With nothing else for it, to do We just put the heads down and walked into the darkness. With one hand on the wall and one on my hiking pole I crawled my way up the steep ascent, ironically listening to Led Zepplins’ “Stairway to heaven” Spud was some twenty paces in front of me, and it seemed no time at all that I heard him call out that the summit shelter was just ahead of us. Reaching the shelter, we were delighted with our progress as we were nearly an hour ahead of our planned schedule. 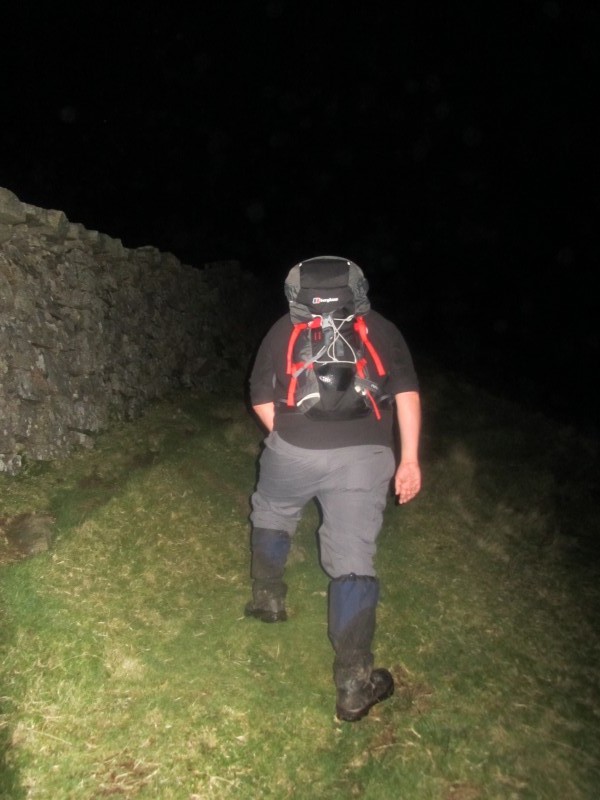 We were hoping to walk along the ridgeline down Shanslieve and into Donard wood, but the wind was now blowing quite a Hooley outside, so we decided to bag that one another day. Commedaghs summit shelter is just a short walk from it’s true summit, so we dandered over to gaze at the glowing patchwork of lights stretching from Newcastle below, onwards into the distance. 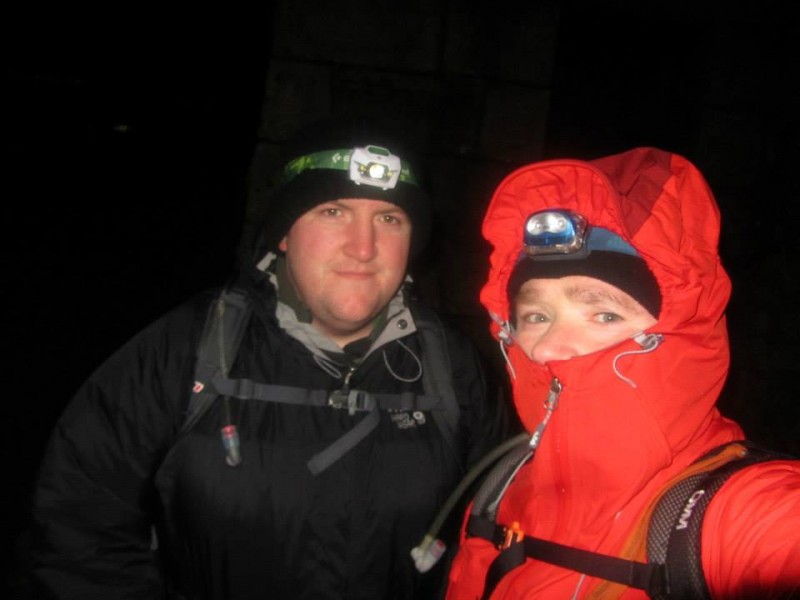 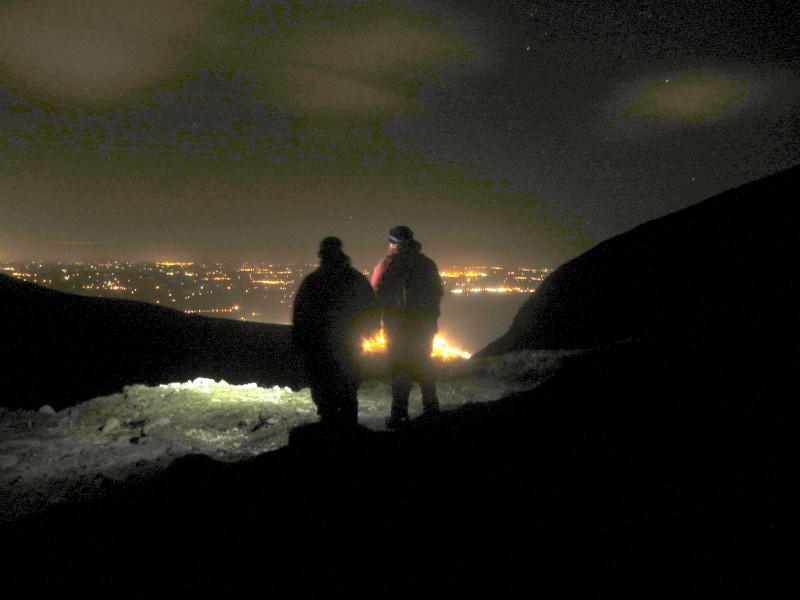 Following the wall down to the Donard/commedagh saddle, we stopped to take a few quick snaps, before descending further down the valley and crossing the Glen river, maybe it was because our feet were beginning to tire, but it seemed to take a lifetime to negotiate the track along the valley floor. Reaching Donard wood, we stopped for a last break at the third bridge, time now again to remove a layer before entering into the woods.

We twisted and turned our way along the woodland track before strolling across the manicured picnic area and into the town. It was just after 9.35pm and our mini adventure was coming to an end. Making our way through a few shoppers and diners along main street, we discussed the difference between the brightly lit streets and the great evening we had in the dark deserted mountains.