It was 6am and I found myself waiting on the kerbside watching the unfortunate early morning workers yawning as they slipped into their daily commute to work. Pausing to listen to the dawn chorus in full swing I hear Spuds car approach. Making our way along country lanes we caught fleeting glimpses of the Mournes as we rose & dipped in the drumlins of Lecale. 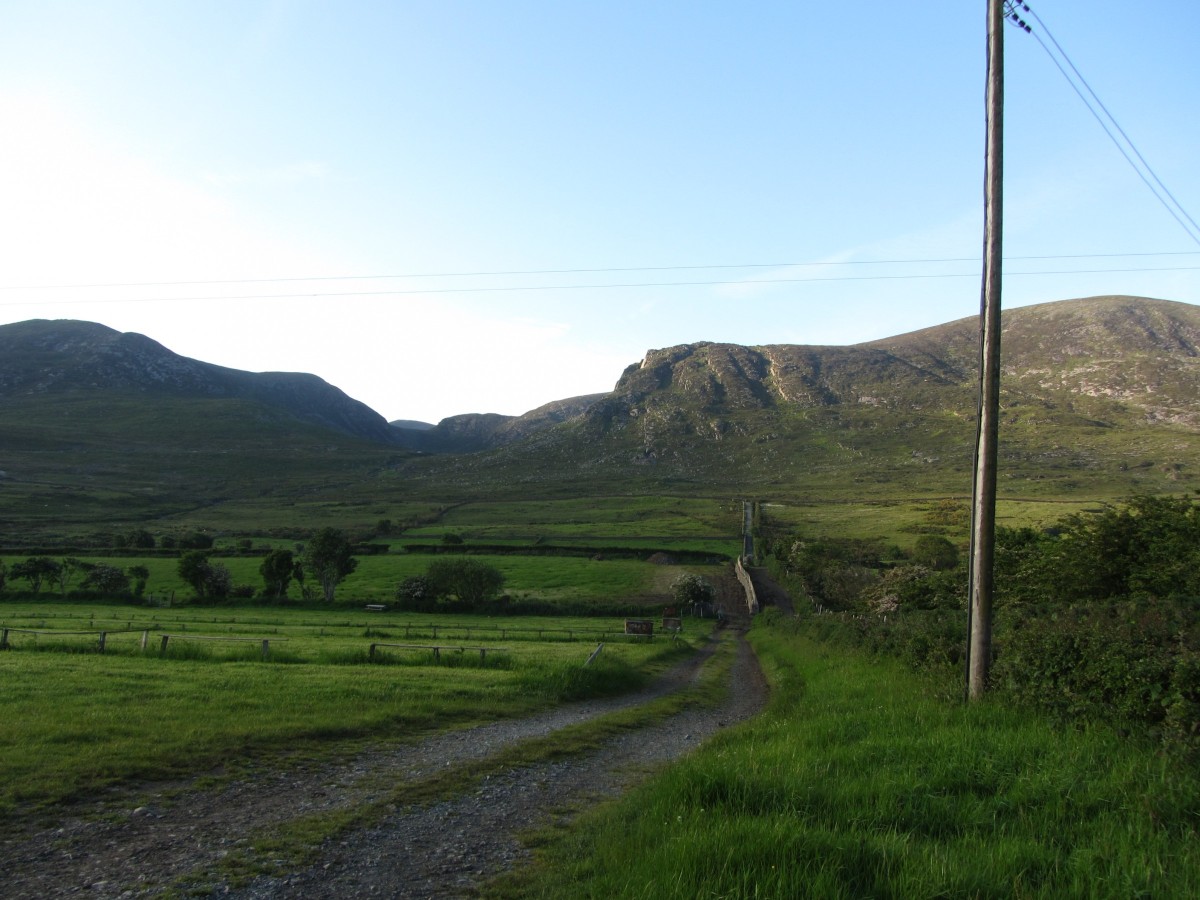 As usual we had followed the weather report in the days before our trek and with the prospect of mixed weather we were delighted to awake to a sunny morning. Our starting point today was Meelmore Lodge, a small privately owned campsite & car park located on the Trassey road just outside Bryansford. Having paid the modest fee we took the first steps of our journey along the lane, ironically there’s a small sign at the start of the lane with ” mountains” on it and an arrow pointing the way, as if they weren’t easy to spot! 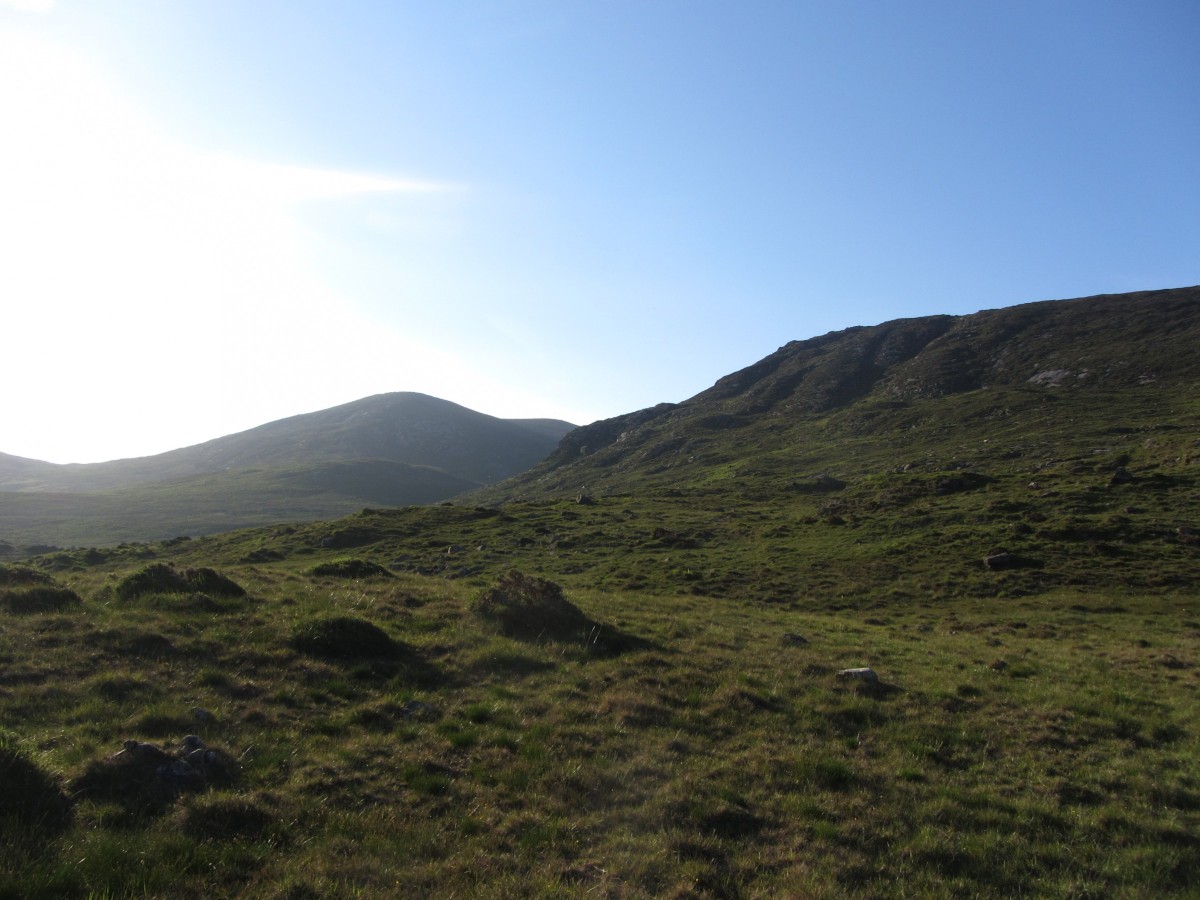 As we neared the stile which leads onto the mountain we spotted rabbits grazing unaware of their passing neighbours. Having discussed our route the night before our trek would be climbing three peaks; Spellack, Meelmore & Bearnagh.The first challenge of the day was to ascend Spellack, which is actually just a lower peak belonging to Slieve Meelmore but deservedly has its own name – probably as result of its magnificent towering cliffs. 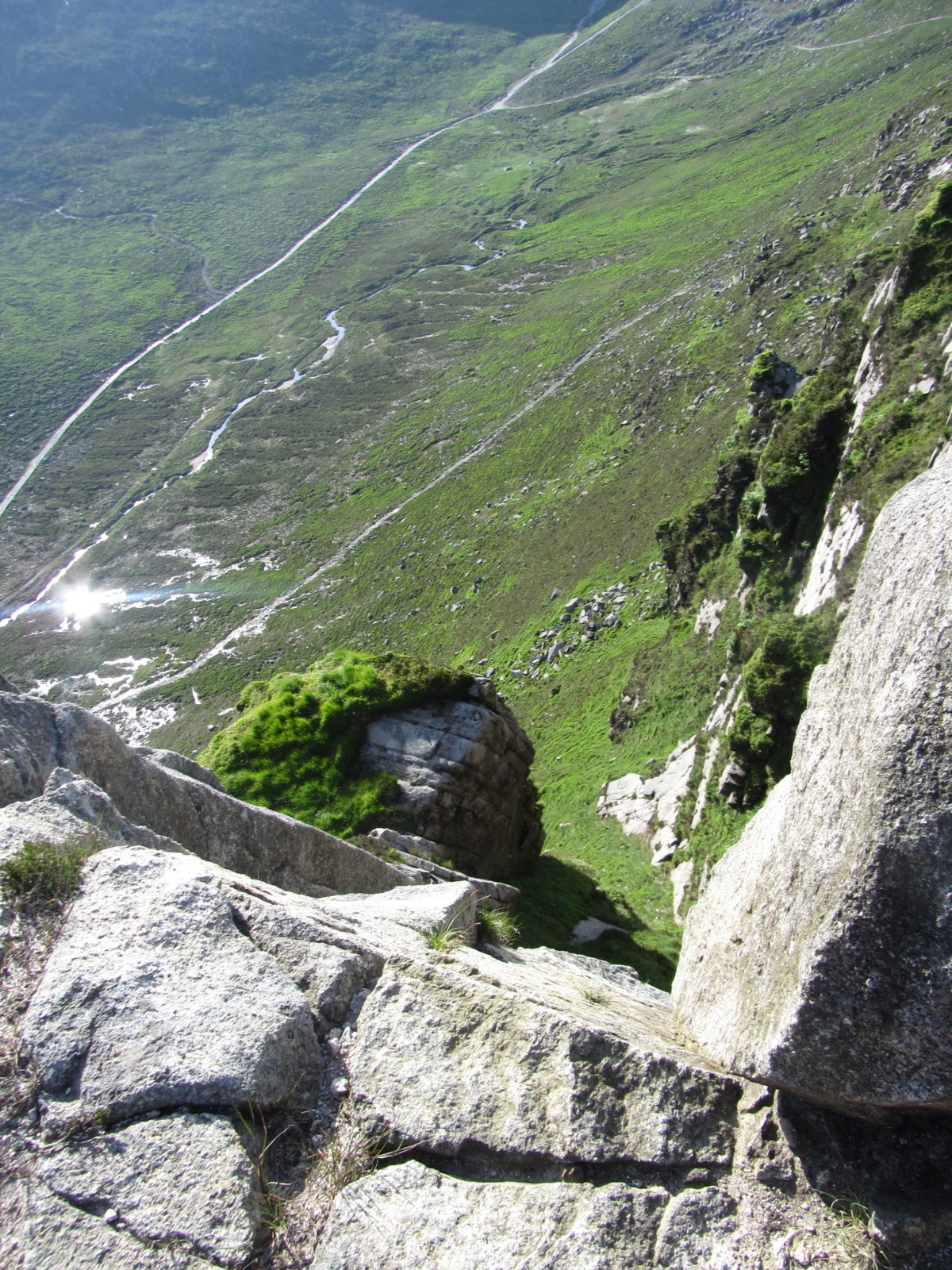 Its a long way down..

Having studied our map we followed a track on Spellack’s northern face and with a steep gradient ahead we clambered up the boggy terrain with Hare’s ears Cotton growing in batches throughout the hillside. It was now only 7.30 am and already very hot, time to apply the factor 50 sun cream and don the hat. A few years ago I got very badly burned by the sun and had learned my lesson.

Spud looks out from Spellacks cliffs

Nearing the cliff top summit of Spellack we stopped to take in the beauty & grandeur that our eyes were greeted with, on all sides we were surrounded by mountains. Spellack cliffs were are a short stroll away so we took some time and made our way over the granite outcrops which crowns these mighty cliffs. Spud went ahead of me standing as close as he dared to the edge while I stood back capturing some photographs. As I walked over to Spud he told how he had seen a falcon take off from the cliff as he approached the edge. It had been over four years since I was last on Spellack and the views on offer were worth every drop of sweat. 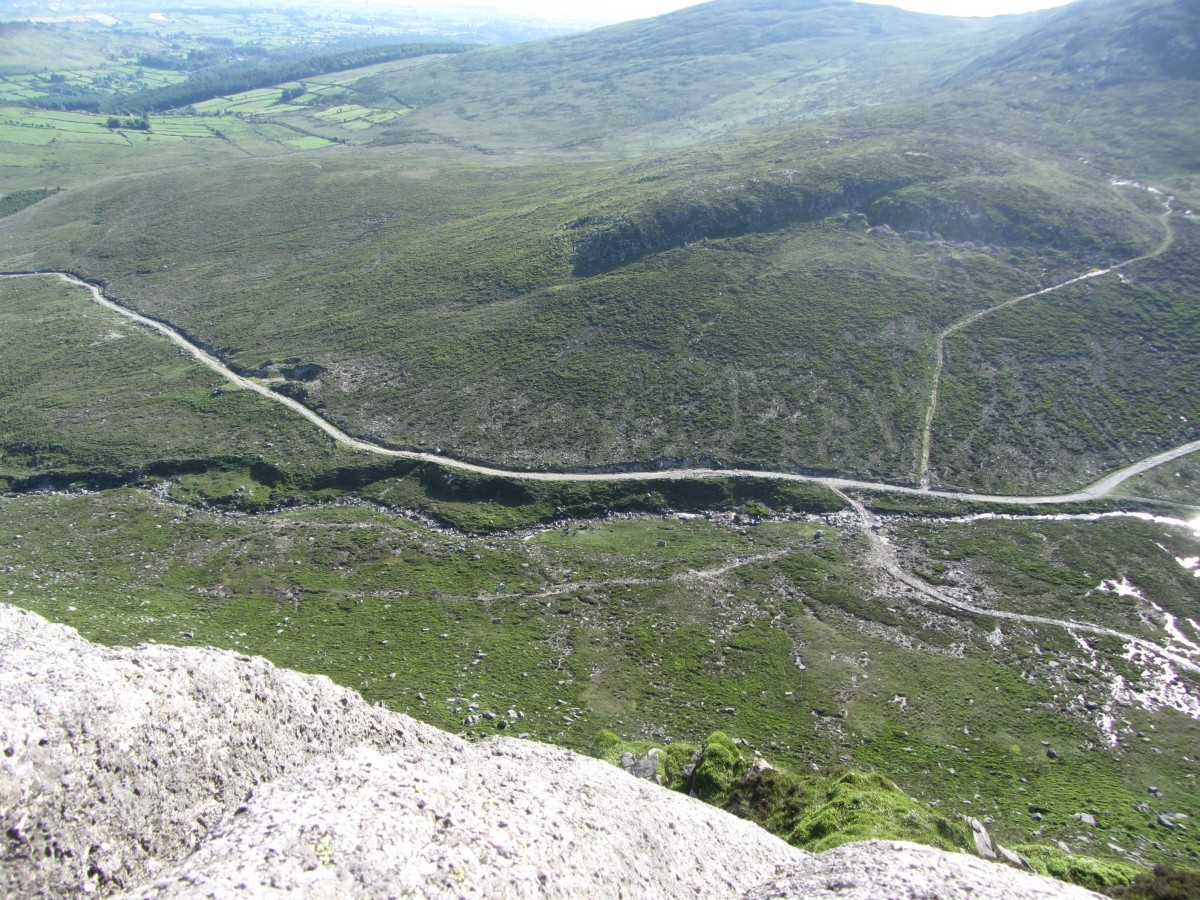 The Trassey trek far below

We now turned and faced towards our next target; Slieve Meelmore and it’s newly restored summit shelter. The trail from Spellack onto Meelmore is well marked and easy to follow but to my surprise it was longer than I thought it was from Spellack. Recently Spud’s hill fitness has somewhat surpassed my own and as I stopped repeatedly to catch my breath Spud ventured on towards the summit stopping often to glance back at my progress up the hill. 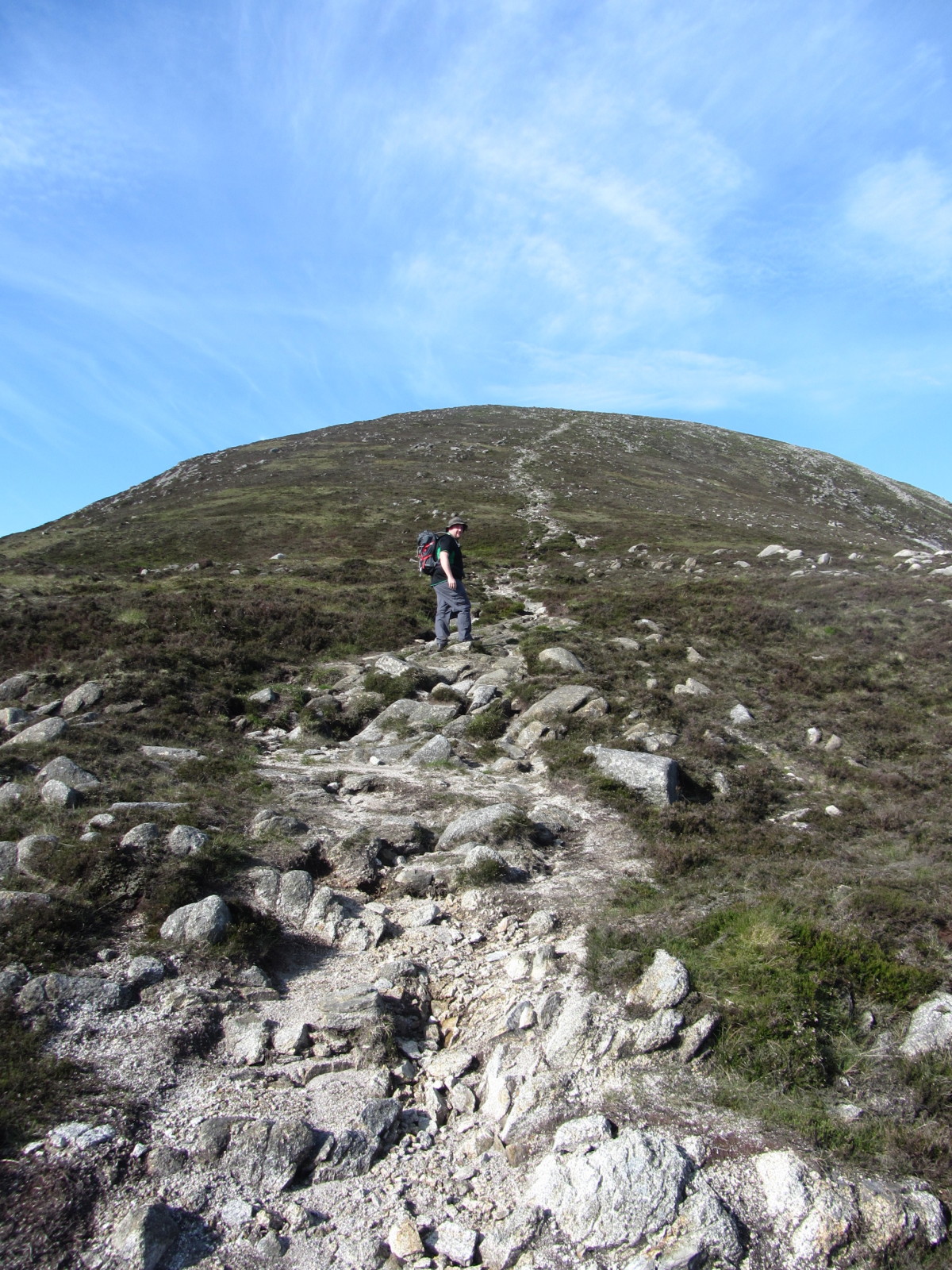 The long haul up Meelmore

The Mourne Heritage Trust has been restoring the summit shelters to their former glory and the Meelmore shelter had been freshly completed. Reaching the Summit we marveled at the excellent workmanship involved to restore these buildings. 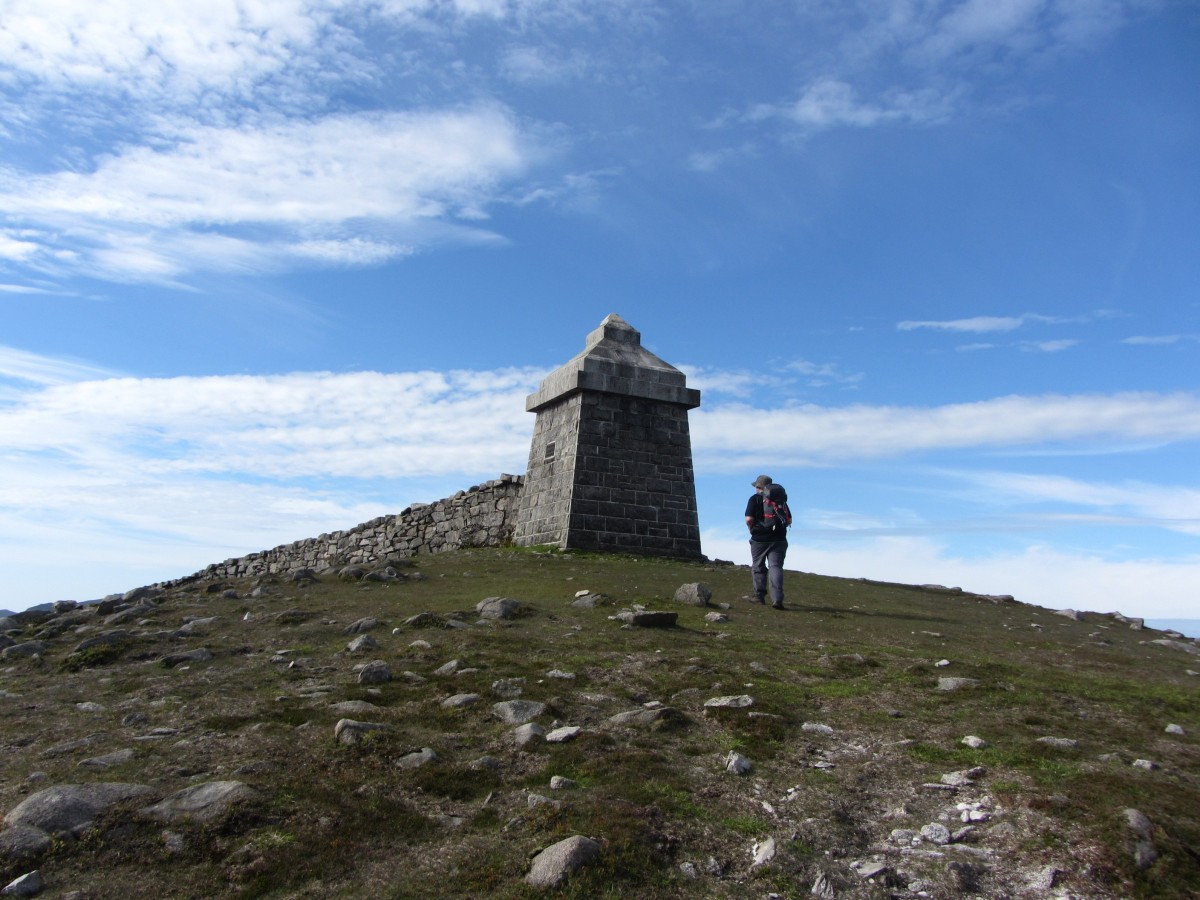 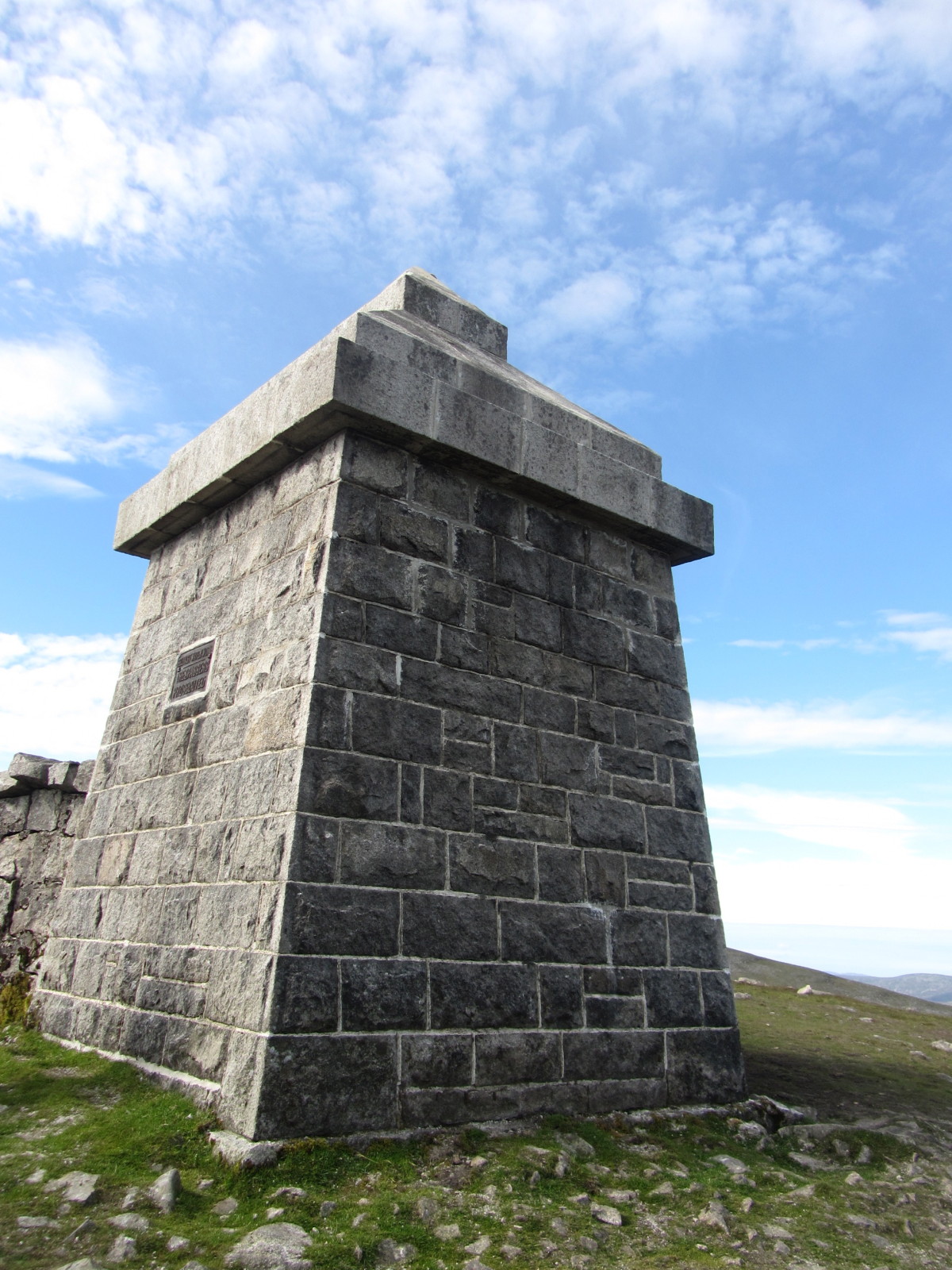 We had planned on having our lunch in the shelter itself but it had some tools and ladders used in the restoration inside and surrounding the shelter so we walked along the wall a short distance away. Casting off my boots I rested my tired feet on the heather and tucked into some treacle bread supplied by Spuds mother in law, it was bloody awesome, followed by another sandwich. Its time like this I’m truly relaxed lying with my back against the wall, I could have dozed off rightly.

Having spent quite some time relaxing we stood up and laced our boots, the descent from Meelmore towards the Bernagh-Meelmore col is quite steep and I was glad to have brought my stick. The final ascent of today would be Slieve Bernagh. Where we intended exploring its summit tors. We’ve both climbed Bearnagh many times before but never from the Southern face which I thought always looked harder. 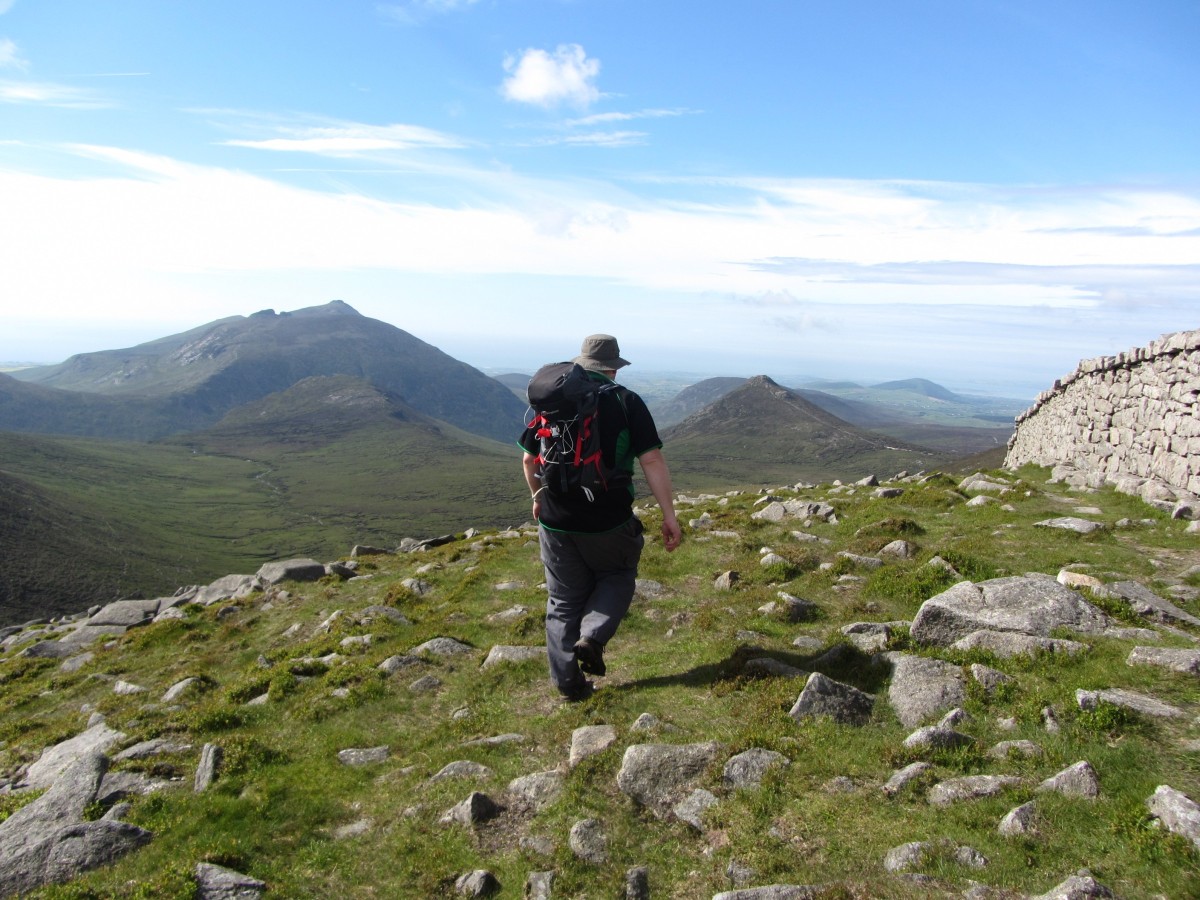 Time to start off again

Walking onto a animal track we ascended Bearnagh and started to slowly contour along the mountain side, again Spud’s increased fitness put him in front but always within sight as I did my usual pretending to stop for photographs act but was actually catching my breath. After some time Spud announced the closeness of the summit tor which was quite a shock to me. I thought more suffering was required to scale the mighty Slieve Bernagh. As I said before we’ve both been on Bearnagh’s summit many times but I’ve never really took the time to explore around the huge tors which crown its summit. The biggest of the tors have a small trail, which leads the walker onto a scramble between two huge sections of granite and onto a small path that stops at the edge of the tor. 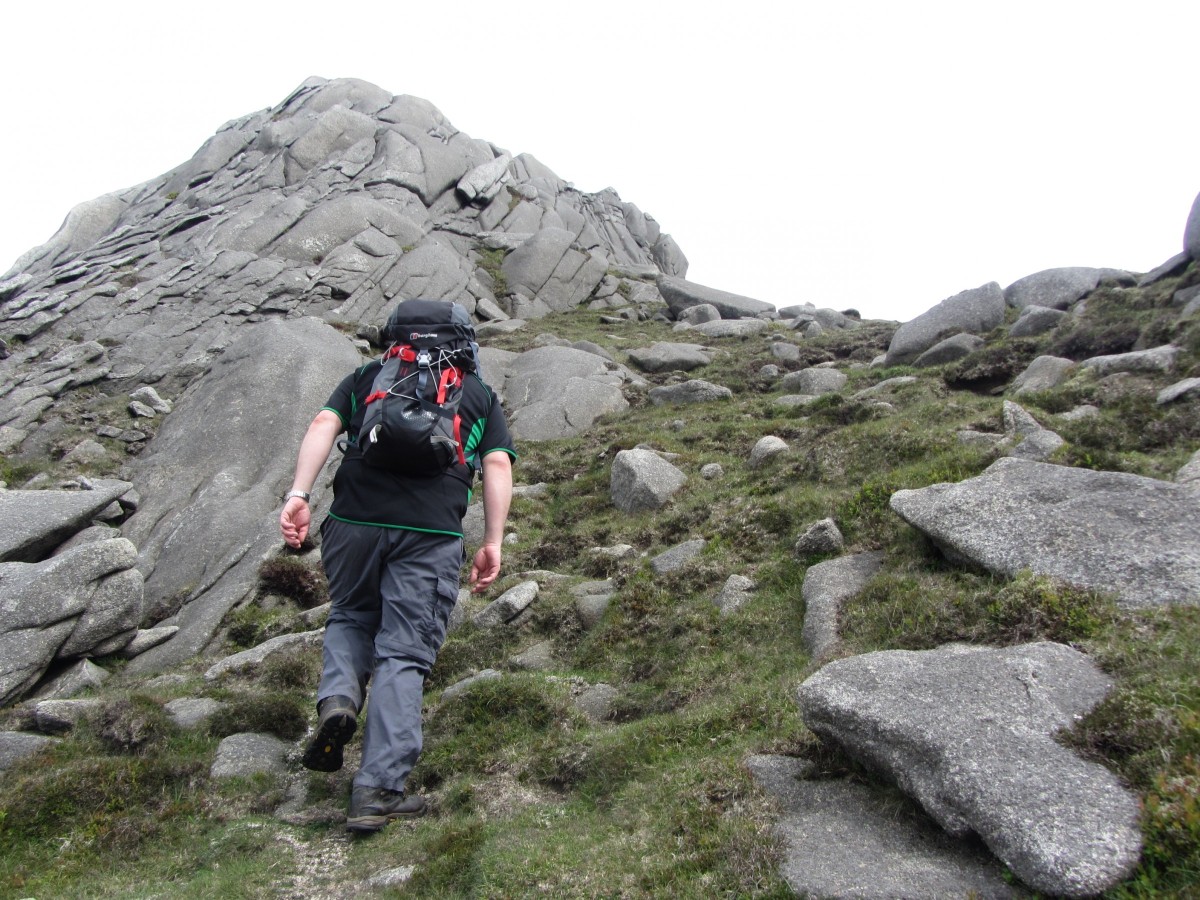 The steep pull before the summit

Making our way off the summit we stopped to greet other walkers as they enjoyed their adventures. Towards the Northern Tor we discovered the Bivvy rock which I’ve seen before, again it’s just another huge boulder of granite but this one has a large cavity underneath it. Some folk have created the perfect bivvy spot by placing small stones across its front giving protection to any souls daring enough to sleep under it. 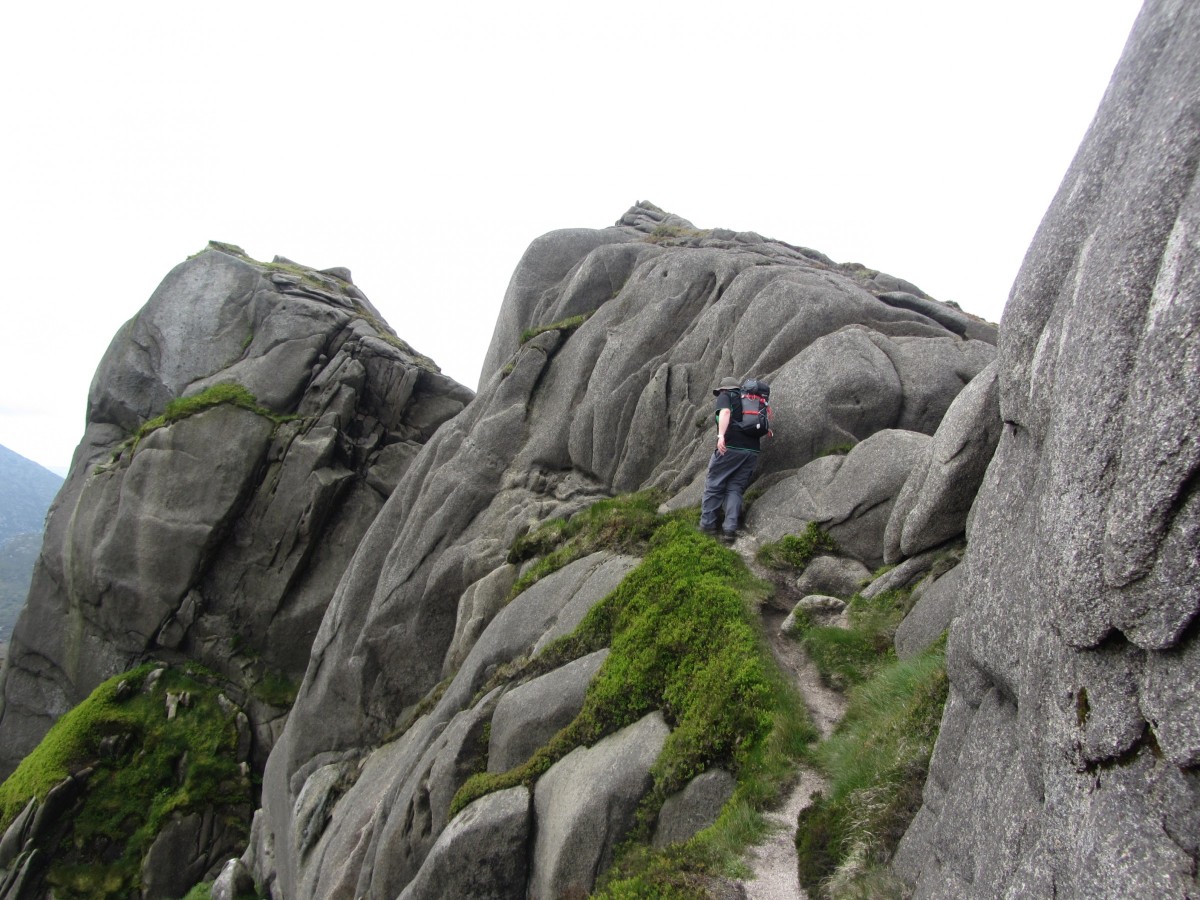 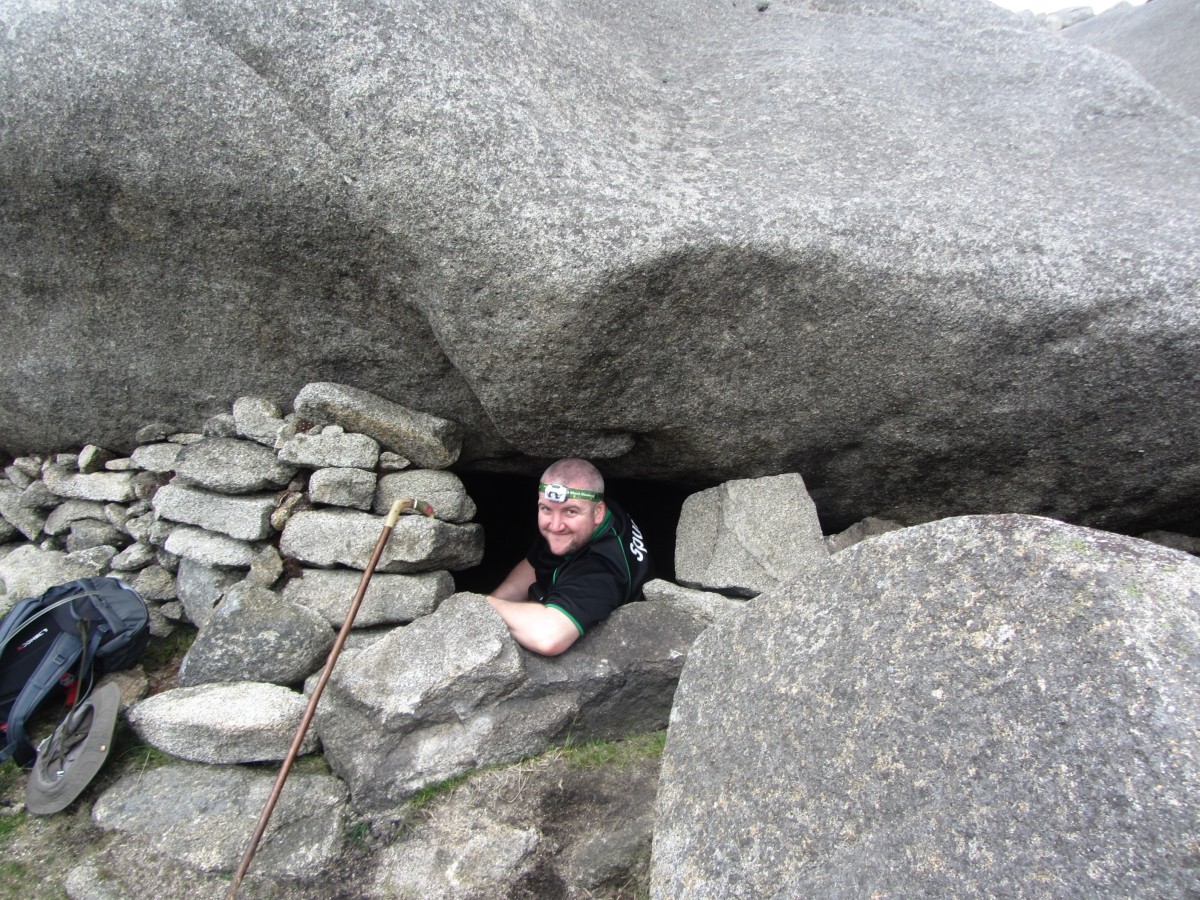 Bivvy rock with room for three

Much like Meelmore the descent towards Hare’s gap is very steep and our pace had slowed to allow for that. Reaching Hares gap we noticed large groups of hikers from all age groups below either walking towards it or away from it. 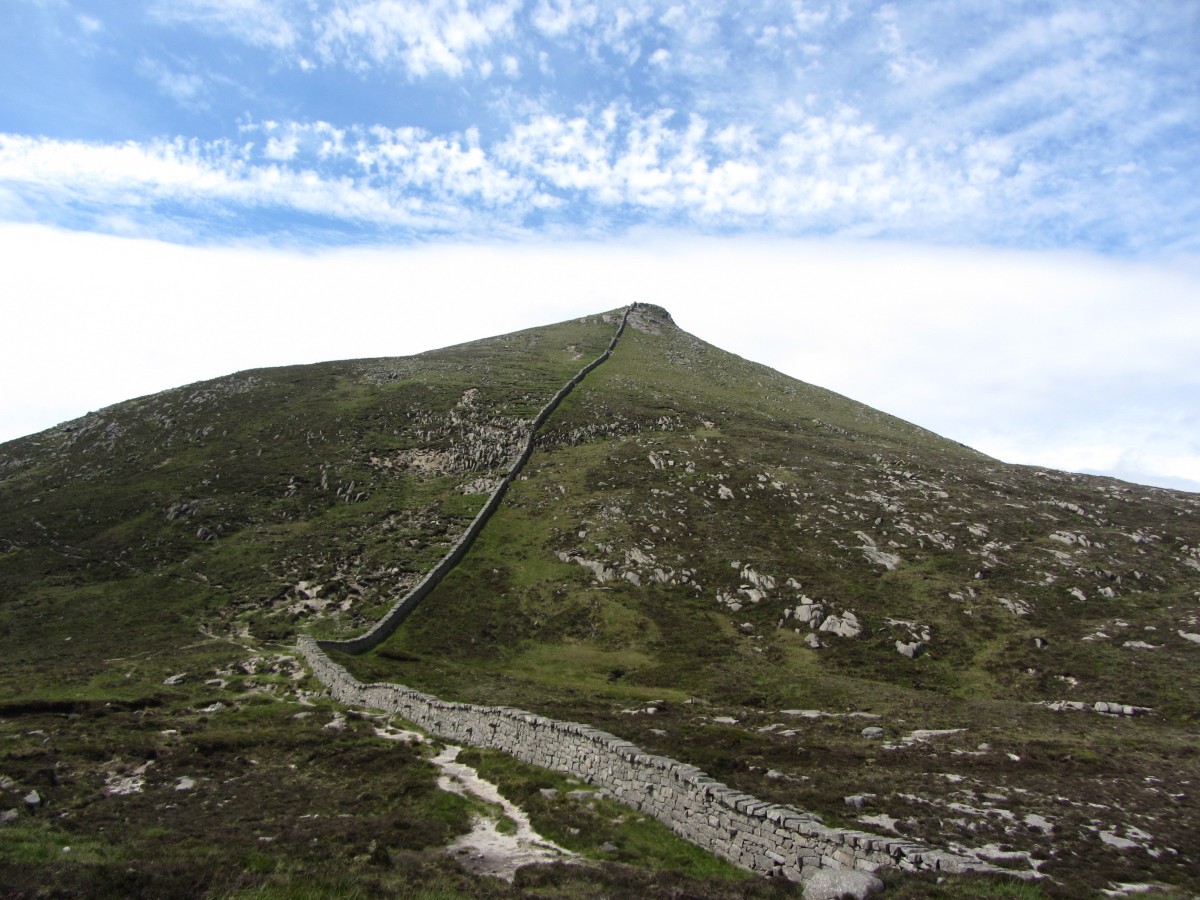 The steep Northern face of Bernagh

As we were well ahead of time we rested in the afternoon sunshine as groups came and went, before long we were making our way down the gap towards the Trassey track and our finishing point at Meelmore Lodge. As we drove along the same roads we had travelled earlier I felt somewhat enriched by the adventures that we had and excited for those yet to come. 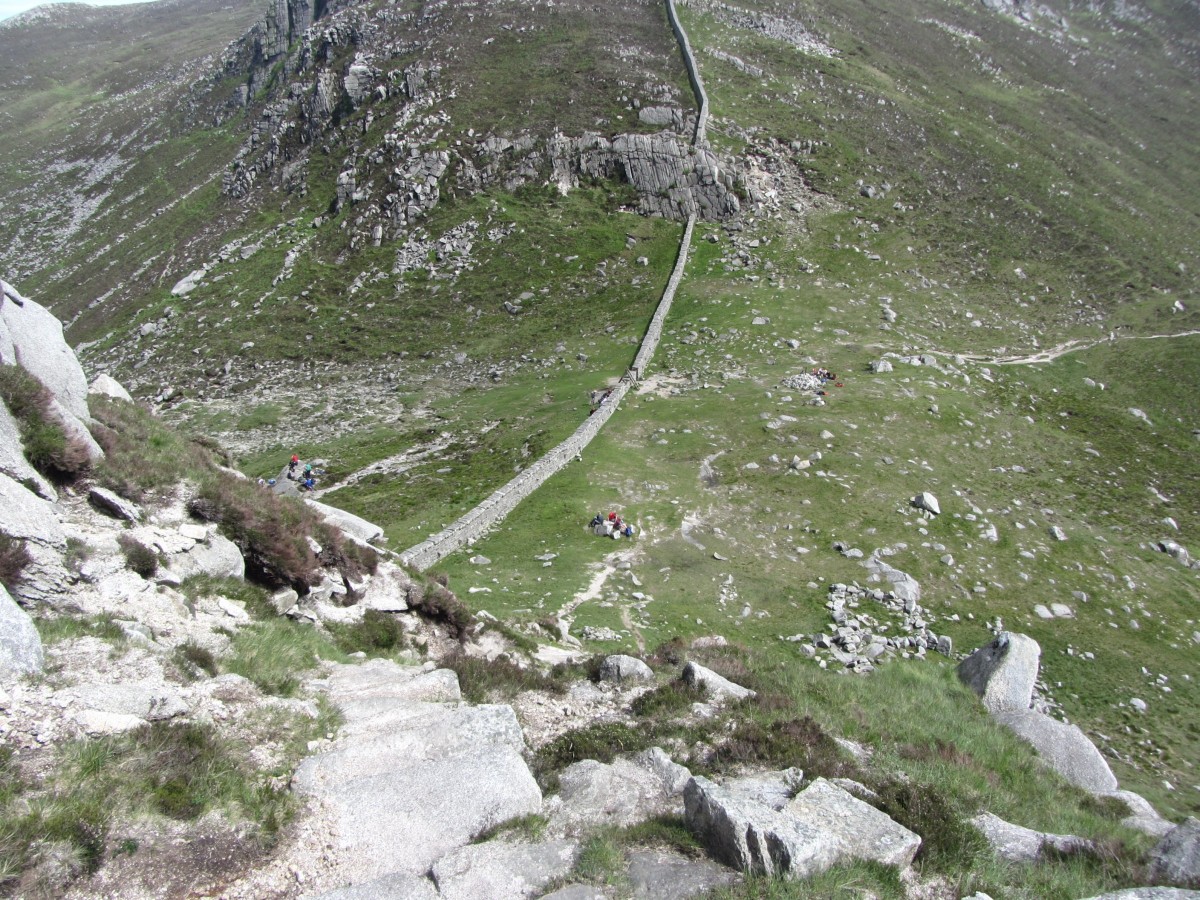