Bright stars, white pinpricks in the cold moonless sky, leading them all along the narrow rocky track. 3 men and their small stocky ponies, each laden with 2 squat barrels of fine brandy, 2 bales of silk, and a large bale of tobacco. The barometer was showing a change in the weather, and the captain of the small black sailed hooker that they had met in the small natural harbour on the coast, had said this would be the last load this year, so they had loaded the ponies to their limit. They made their way down the track, the unshod ponies knowing every twist and turn, so familiar were they with the smugglers route, their tack covered in sackcloth dyed black, to cover any unwanted sound or reflections that would attract any attention. The lead man suddenly paused and clicked his fingers twice, as he heard a noise in the dark. The revenue had stepped up patrols recently, but he had it on good authority that McRoberts and the other local officers were ensconced in a tavern in Newcastle, and would be in no fit state to follow them down the Brandy Pad. There was no sound save the whistle of the biting gusts of a Northerly wind, as the small procession stopped at the lead mans signal. The ponies, trained to respond to a code of pulls on their head collars, stopped dead, and stood obedient and silent, awaiting the next command. There was no further sign of anything or anyone in front of them, but he waited nonetheless. “He’s twitchy tonight” thought Ned, the memories of their recent close shave with McRoberts still fresh, the scar from the musket ball that had grazed his temple still red and painful. They said their leader had nine lives, but he had certainly used up a fair share of them over the years, and they could ill afford to lose another load after the hit they had taken last time. After what seemed an eternity, he clicked his fingers once, and they again made their way onwards, and thoughts turned to a warm turf fire, sharing out the spoils, and a night of hard drinking to a job well done….

The above is just a figment of my imagination, but there is no doubt that the route of our walk, The Brandy Pad in the Mournes, was used extensively by the men and ponies smuggling contraband from the sea, through the mountains to Hilltown and elsewhere. It had been many years since I had completed the route from Bloody Bridge to the Trassey car park, and joined by John and Eamonn, a nice day’s walking was on the cards.
An early start picking up John, and then rendezvousing with Eamonn, before dropping his car at the Cecil Newman car park, saw us leaving the Bloody Bridge at about 7 am. 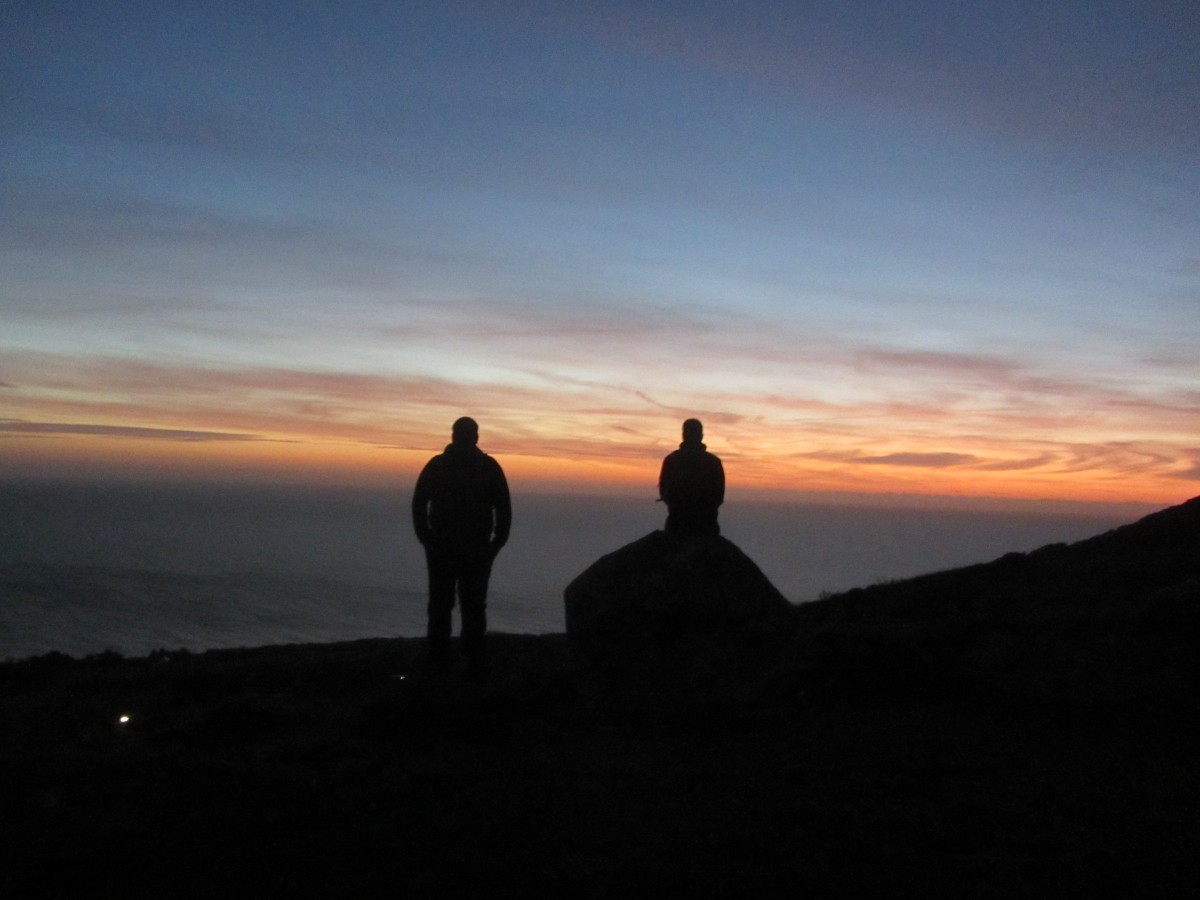 The brightening sky announcing the arrival of dawn as we made our way up the good track, occasional pockets of frozen ground cracking underfoot as we passed. Soon the snow dusted cone of Donard was clearly visible in the weak morning light, cloudier skies leading to milder conditions as we made our way upwards, with stars peeking through where the clouds parted. We soon consigned our headtorches to packs, and worked our way up the increasingly icy track. Small rivers running across the track had frozen solid in the recent sub zero temperatures, the ice so hard and thick that the recent thaw had little impact on it. We carefully picked our way up the frozen track, past the quarry and onwards to the Mourne Wall, where we stopped for a while to breathe in the view and have a cuppa.

The Brandy Pad was thick with ice in many places as we made our way along, and caution was required to avoid a nasty slip! This route is a wonderful way to sample some fine Mourne views, and we stopped often as we walked, to snap photographs and breathe in the atmosphere amongst the snow dusted high peaks. The number of people making their way along in the opposite direction from us increased as the morning progressed, the bright clear day ideal for walking, even with the tricky underfoot conditions!

We took a detour up little Slieve Beg, home of “The Devils Coachroad”, a stunningly steep narrow gulley, carving its way down into the Annalong Valley. It’s steep sides dusted with snow and ice, glittering treacherously in the bright sunshine , the huge white bulk of Donard framed between its steep sides.

Then onwards towards the Hare’s Gap, filled with colourful groups of walkers, all ages, all out enjoying the winter sunshine, and swapping stories and laughing amongst themselves about negotiating the frozen Boulder field to get there. Another leisurely cuppa and some grub were enjoyed, before picking our way along the high track and down the frozen Trassey track, and back to the car, faces red and wind burnt, but smiles all round, and another quality walk in the Mournes safely completed.

Check out a short video from our walk here: