With all this unexpected snow I was chomping at the bit to have an adventure in the hills & with our planned Donard summit camp cancelled due to severe weather I just had to take advantage of Eamons offer to scale Bernagh. 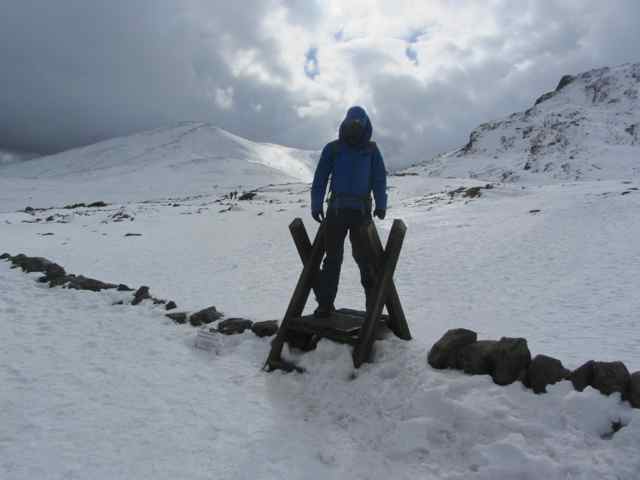 Leaving the house at around 9am the conditions were pefect,the sky was clear with a temperature of around four degrees,making our way along the Trassey road you could really see just how much snow this area got last week with huge piles of snow stacked up along the hedge row,the road itelf was only open to single lane traffic.Parking our car at Meelmore lodge we trekked along the path which leads to the to the first stile of the day.the snow was so deep here that we simply stepped over the wall. 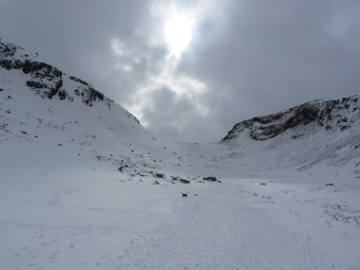 Making our way across the ground below Spellack it was great to feel the crushing of snow underfoot,now further up the valley we agreeded it would be best to cross the frozen Trassey river at the ford.It was here we got our first glimpse of Bernagh which was still covered in snow.Unknown to Eamon I was a wee bit worried about this hike for a number of reason,firstly that I’ve put on some weight & secondly that following a torn abductor last year I was concerned about damaging it further.Nearing Hares gap I felt quite good actually, I put this down more to the childish anticipation of playing in the snow rather that some renewed physical strength .The climb up throught the boulder field on the approach to Hares gap it always a nightmare this time it was a snow covered joy,not a boulder in sight. 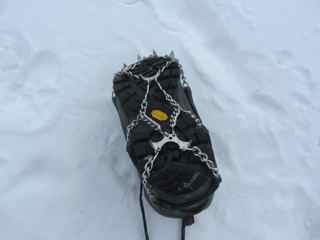 Again the wall & stile were covered in snow,we stopped for a good 15 minutes enjoying some turkey sandwiches & much need caffine.time to get all serious & strap some ironware to our boots,eamon was sporting the full crampons with myself wearing a spiked chain which secured over the boot,eammon also carried a ice axe,I can remember fixing this gear to my boots thinking I wonder do I really need it,the answer was quite simply , “ yes “ within 1 minute of leaving Hares gap we were faced with the Black stairs leading up onto Bernagh,the amount of snow & ice on them was unreal,it was one of those moments when everything gets real in a big hurry.We decided at the point we were just going to take as much time as we needed to scale this mountain.so having pasted the Black stairs we made our way towards the main ascent on Bernagh which is towards the North tor,this would be the most dangerous part & worth considering some time on which way to tackle it,most of the snow was held up against the wall with huge sheets of ice as well.With each step I made sure I dug my boots in, trying to hold onto the mountain,it was quite a surprise to me just how easy this ascend was for us,now looking round us we did notice some hikers without ironware struggling to get a grip on the mountain. 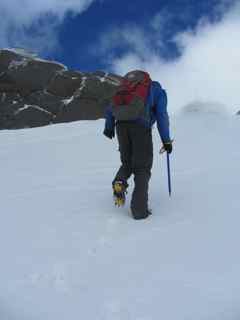 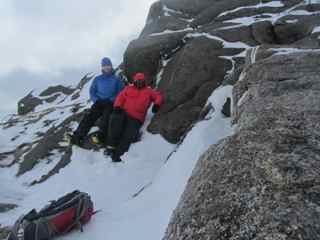 The summit itself was laden with a heavy blanket of snow with some drift towards the wall up to 6-8 feet in places.Again it was coffee time with chocolate mini eggs.The sun now came out in all its glory which caused a glare, “time for the snow goggles” which were great & really helped our sight.Picking a safe area we practised arrested falls using an ice axe which was quite good fun,but on a more serious note something I would like to learn more about. 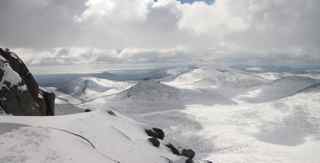 Now we did plan to descent down the Bernaghs southern slope towards the Meelmore Col but having had a good look we thought there was just too much snow on it & with the rising temperature the risk of avalanche was just too high,so we went back the way we had come,reaching Hares gap around 4pm.It was truly a fantastic day in the hills,sitting in my work today I was still buzzing from our adventure in the snow with a consent grin on my face.Sometimes its just nice to remind youself you’re alive.