Home Bearnagh via the saddle

They say summer is the best day of the year in Ireland. This year it fell on a Saturday.

After having worked 4PM to midnight all week, I packed a 10kg bivvy kit in my 32L montane medusa on Friday morning, hoping to make the most of Saturday off. After what seemed like an impossibly short sleep, I woke at 8am and got the next bus to Newcastle. Even that early the heat was palpable, it was definitely going to be a hot one. Feeling the sun stream in the window just made me even more glad I was headed for the hills.

I had packed very little by way of readily edible food, instead opting for lighter dry meals. To avoid relying on a large lunch, I made sure to have a very large breakfast. It makes it a little tougher for the first few hours setting off, but it’s worth it later on.

I’d always recommend Nikki’s kitchen for anyone looking for a bite in Newcastle. The food is excellent, the prices are reasonable and the staff are very friendly.

After a truly enormous (and tasty!) breakfast, I set off reassured that while I might be a little sluggish for the first hour or so, I would definitely not need much by way of lunch later.

There were various charity events and races on, including a sponsored hike for Action Cancer. I saw more than a few red faces in pink t shirts cursing “never again”. I sure hope they change their minds, since there’s no better way to relax than in the Mournes.

I pressed on for the saddle and made it there in roughly an hour. Not a stellar pace to be sure, but I’m sure the big feed played a part in slowing me down a little. The ascent from the saddle to Donard was like Belfast’s Royal Avenue, streams of people in both directions. So after a brief stop at the wall, I decided to cut Donard out of my plans, the view from Commedagh is better anyway. 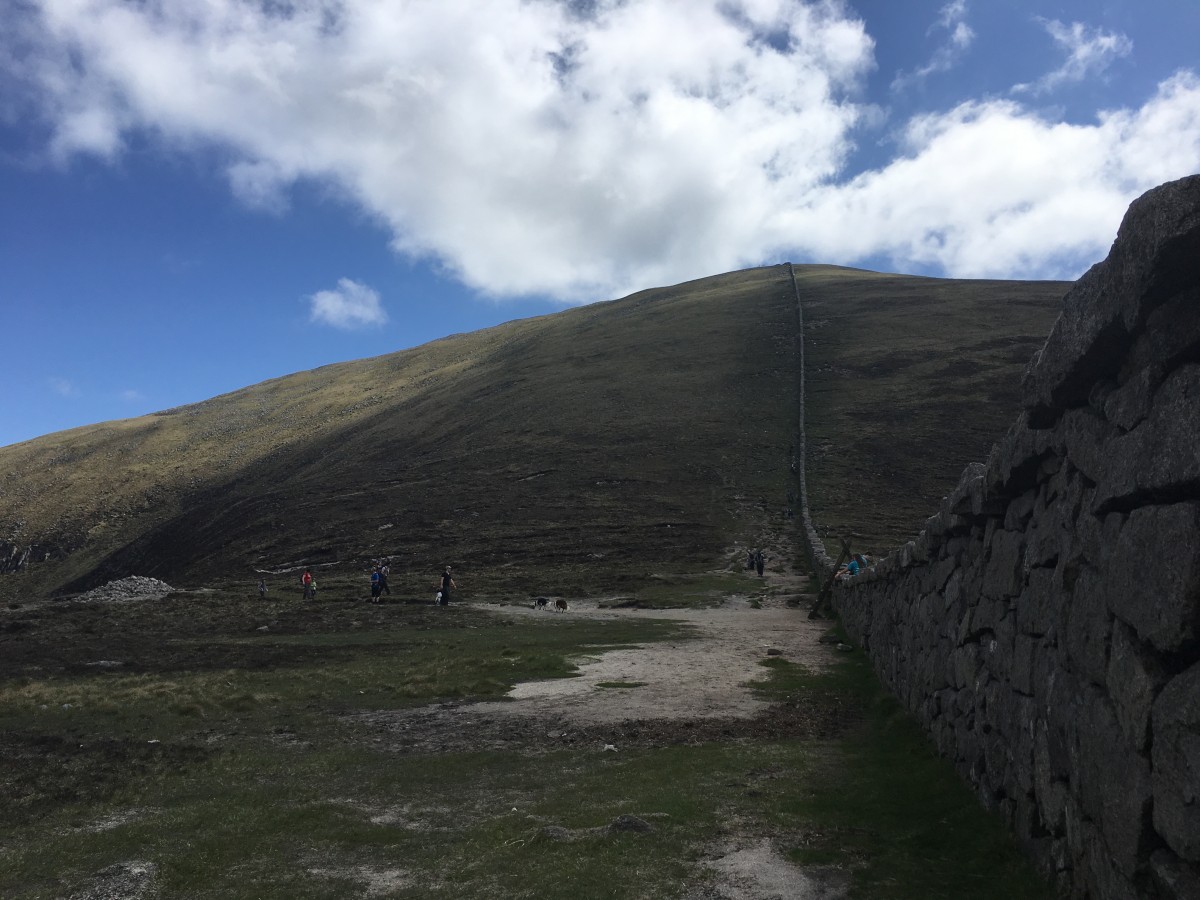 Busy at the saddle

I’ve always enjoyed the walk up Commedagh from the saddle. The footing is very easy and the ascent is nice and gradual. As you move upward you get to see the beautiful view down Annalong valley and over towards Bearnagh.

Bearnagh’s distinctive “crown” in the distance

When I reached the top of Commedagh there was a large group of hikers visiting from the south. They were all enjoying themselves and having a spot of lunch. I took a few photographs of their group on their phones for them, it took a panorama to fit them all in! After a brief chat we bid each other a pleasant day and I headed down Commedagh towards the water pipe. 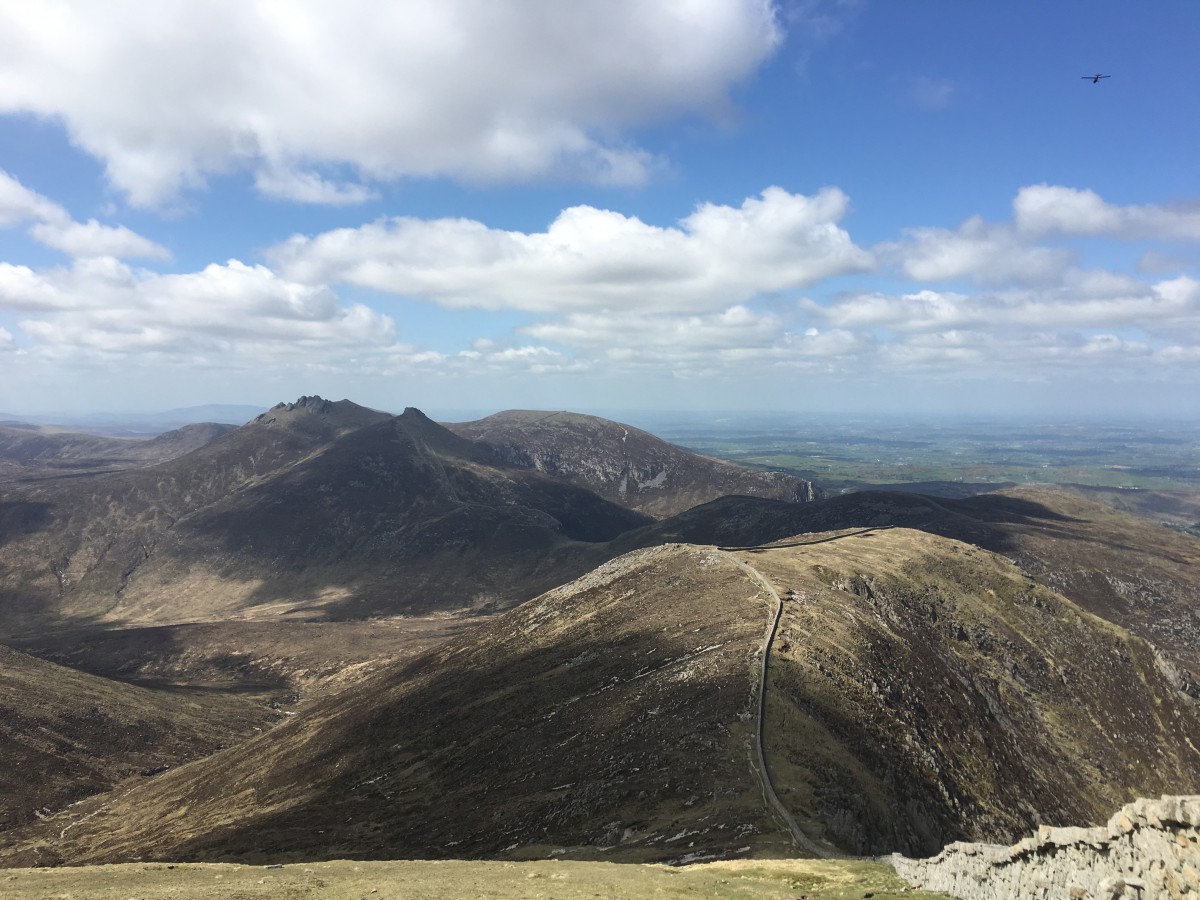 Feeling a little parched already, the sight of the water pipe was definitely a welcome one. I drank around a litre and a half, filled my hydration pack up to full and got moving again. The nice, soft path down off Commedagh is always a pleasure to walk on and I couldn’t help but keep looking up at Bearnagh in the distance. Photos don’t really do the day justice, the stillness was incredible, all you could hear is the occasional bird or sheep. This makes a welcome change from the many days of howling wind, particularly on Commedagh.

Before long I found myself on Corragh. The last time I camped here it was with John, on a similarly wonderful day. You can read the writeup here if you’re interested. I had earmarked Corragh for my camping spot, but wanted to get a decent walk in first, so pressed towards Slievenaglogh. 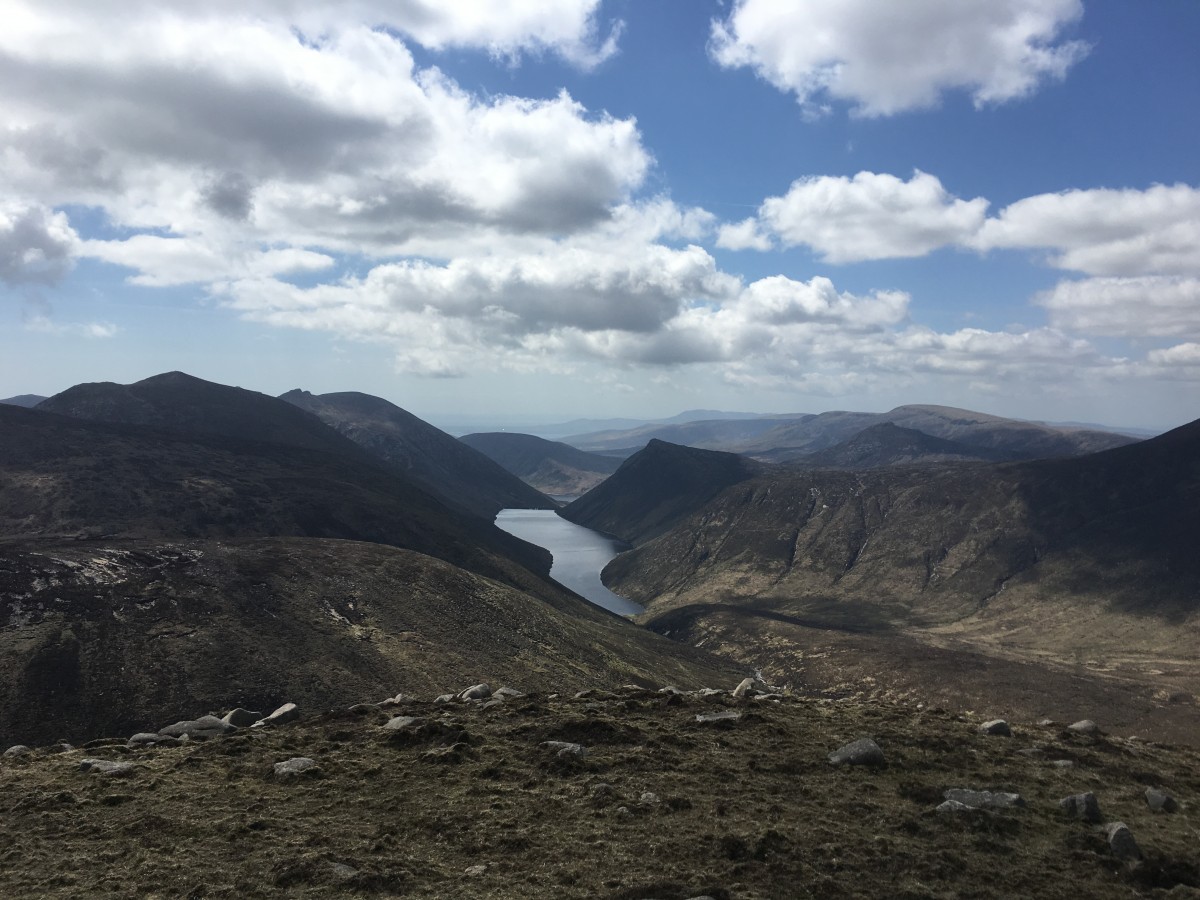 The view from Corragh is hard to beat

I headed towards Slievenaglogh, meeting the occasional hiker coming the opposite way. “Some day for it!” seemed to be the standard greeting and it was entirely appropriate. I felt lucky to be spending the day surrounded by such beauty. Even on the greyest, most miserable day the Mournes have a special beauty, but on a sunny summer’s day there’s nowhere like it on earth.

On Slievenaglogh I was met with another familiar site, the stone cairn at the summit where John and I headed for a quick after work bivvy on a wonderfully clear evening. Incidentally there’s a trip report here for that camp too if you’re curious.

At hare’s gap there was as much of a gathering of people as there was at the saddle of Donard and Commedagh. People sat and enjoyed their lunch in the sun, some were coming down off Bearnagh and some were on their way up. I peered over the wall to catch a glimpse of the Trassey track, the soft, tan coloured sand glowing bathed in the sun. There’s something about the sight of a nice, smooth path which I find pleasing. Maybe it’s got something to do with memories of trips over rough open ground and the elation which comes with finding a path with better footing. I passed a few hikers resting at the North Tor. They certainly chose a good stop to relax surrounded by the rocks.

Looking towards the summit tor of Bearnagh

When I reached the summit tor I decided to have a quick clamber around the rocks. I saw a tall man standing with his dog by the rocks. It turned out to be Chuck McRobert! It’s always great to run into a friend in the hills, particularly if it’s unplanned. I asked Chuck if he had planned on bivvying, but he lamented that he hadn’t brought any kit with him. Part of me expected him to change his mind and fashion a shelter out of some grass and an abandoned hat, things such as this have been known to happen with Chuck.

We climbed up onto the rock and admired the view for a while, scanning the area for potential bivvy spots. I had a couple of german biscuits which I had brought with me for lunch. The view was spectacular. 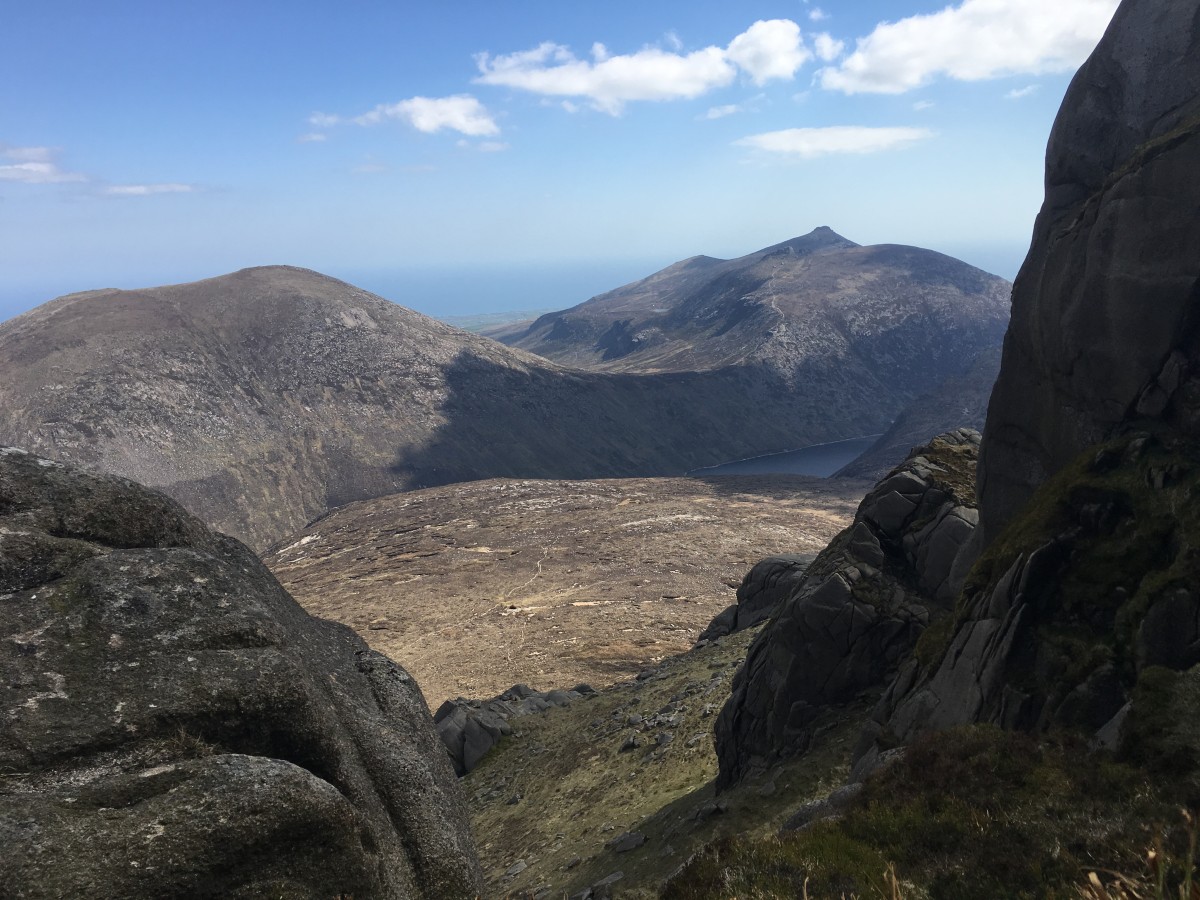 Now *that* is a lunch spot!

After a quick bite and a chat, Chuck headed on his way. I relaxed and let the sun beam down on me for a little while, until I could figure out what I wanted to do next. I decided to head back the way I came, in the direction of Corragh. I would decide at the Commedagh water pipe if I was to double back to Corragh to spend the night, or head on home. John was supposed to be joining me for the evening, but some last minute changes to his work rota put an end to that. I didn’t particularly feel like a solo, so the jury was still out on what I’d be doing.

The wind had picked up considerably and after being idle for a while in my baselayer I started to feel a bit of a chill. I threw on my new PHD windshirt to keep the wind off my back for a while and it did the trick. 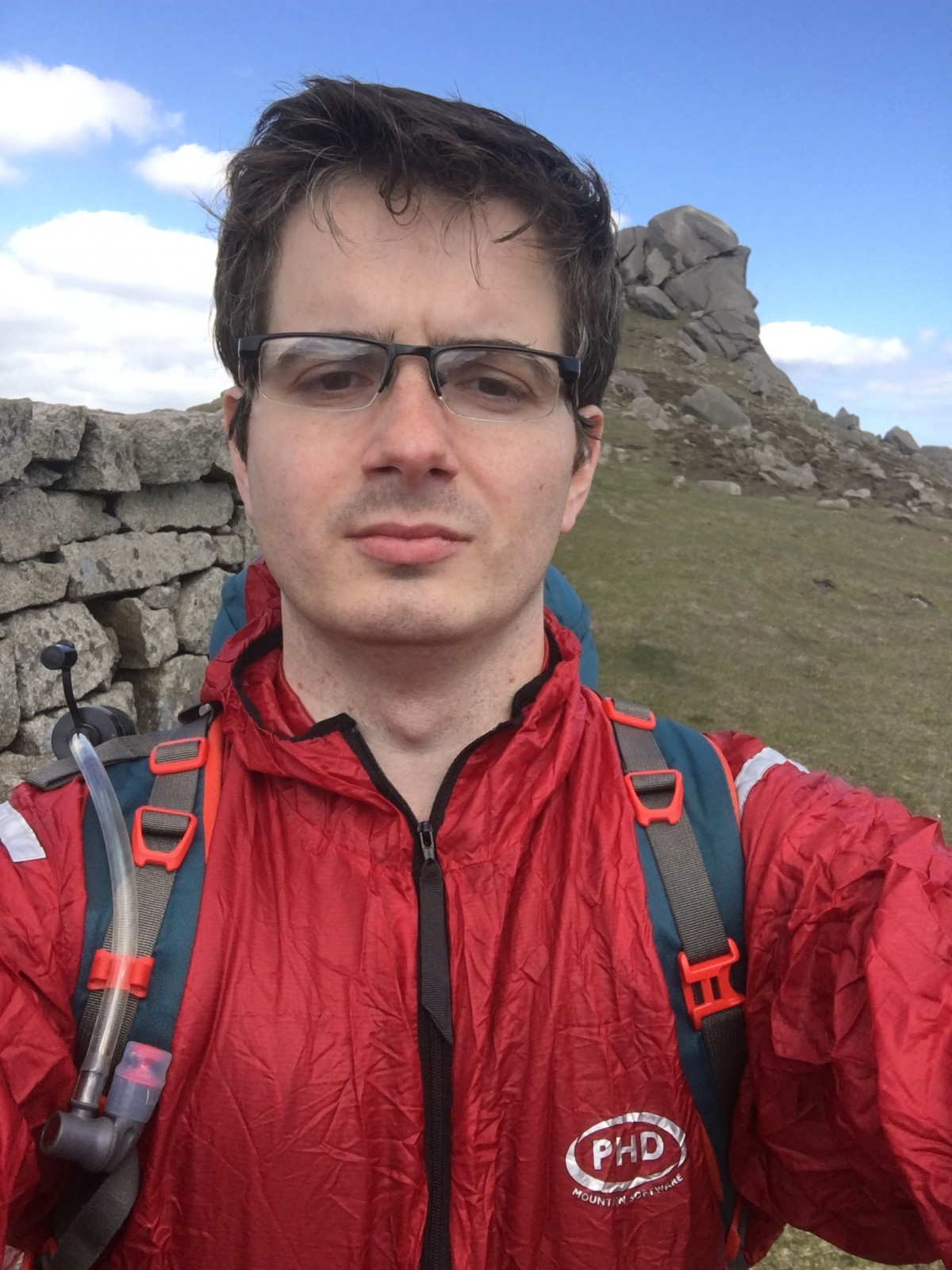 The sun was starting to dip a little lower in the sky now and the grass and stones were beginning to take on that wonderful syrupy amber hue. I stopped at Hare’s gap to admire the plaque on the stile: 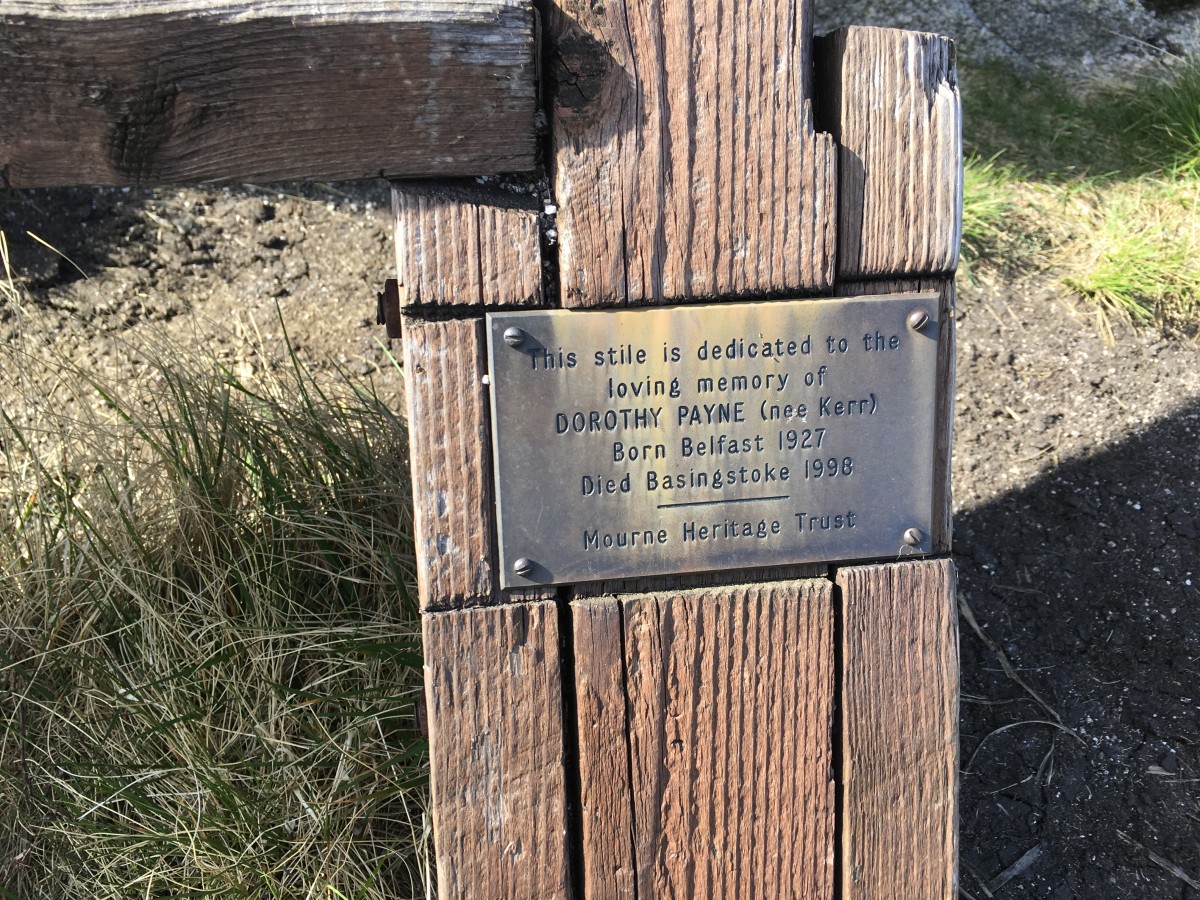 One thing which always impresses me about this area of the Mournes is the magnificent uniformity of the Mourne Wall. In certain parts of the Mournes the Mourne Wall has quite a haphazard look to it. Around the area of Slievenaglogh it has a marvellously uniform construction, reminiscent of some sort of roman fortification. It’s always pleasing to the eye. 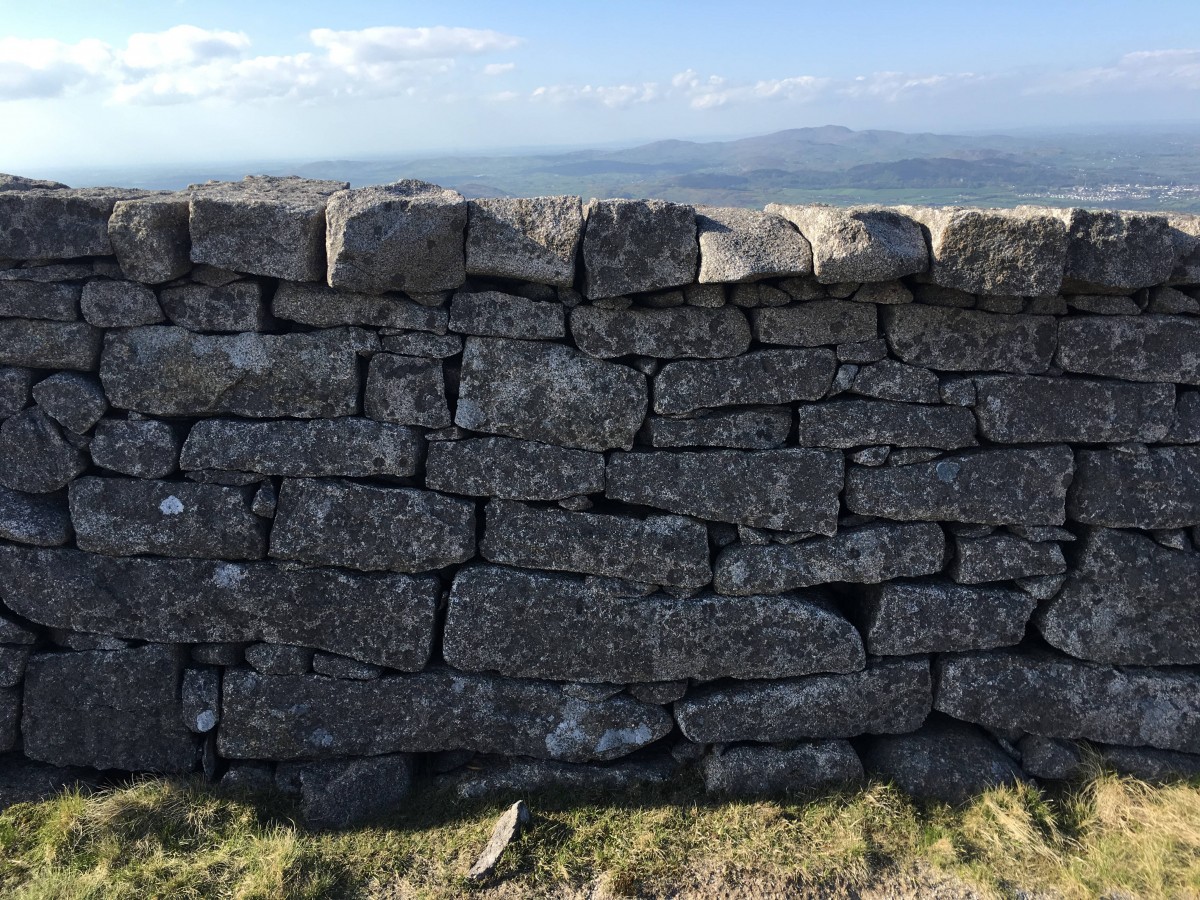 When I got as far as the Commedagh water pipe, I drank a couple of litres and sat and thought about whether or not to spend the night. I still didn’t particularly feel like a solo camp, so I decided to press on for the saddle and head on home. I only had a couple of hours to reach the bus stop, so I made sure to set a reasonably brisk pace.

I passed a young camper headed for Commedagh summit on my way down. He was pleased to hear he’d have it all to himself. Hope you had a good night if you wind up reading this!

As I reached the saddle, the amber glow of the setting sun left the whole area looking particularly inviting. 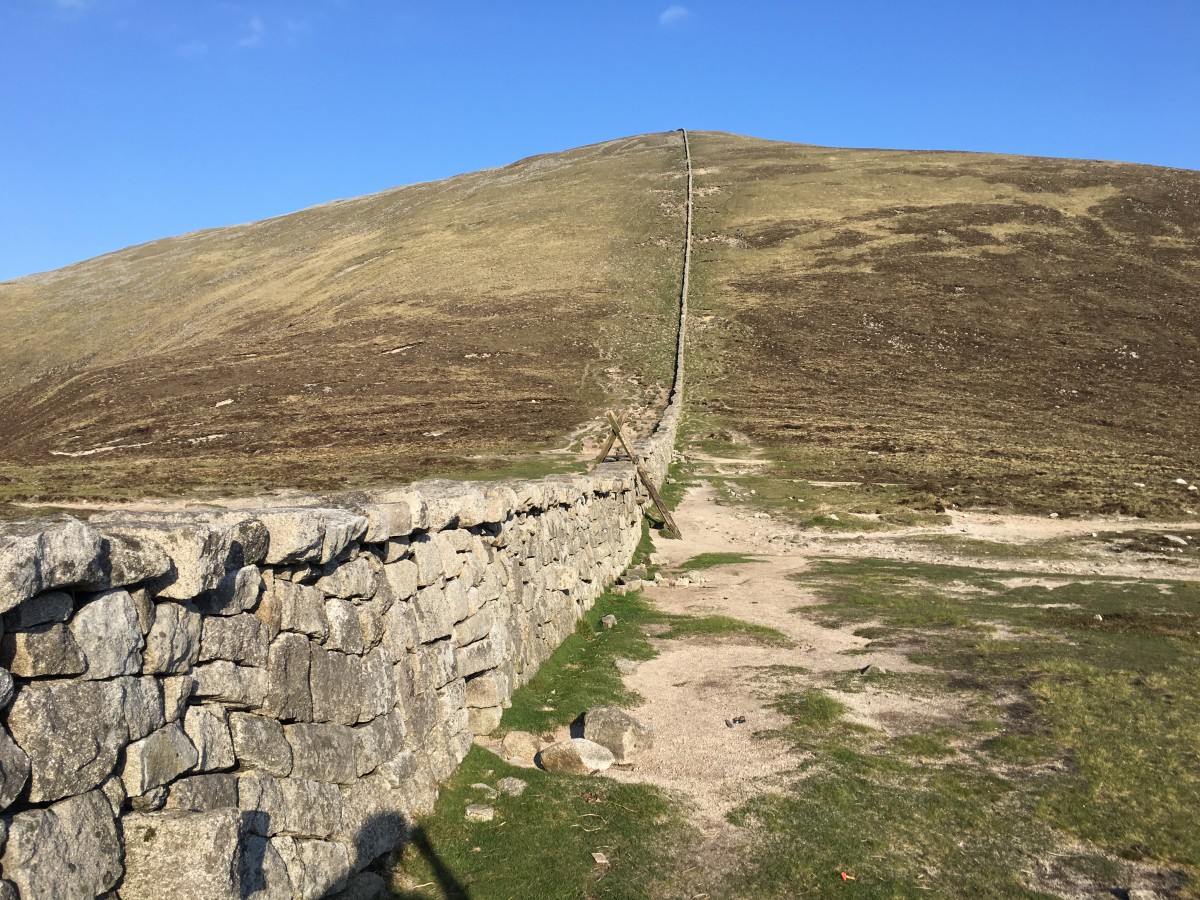 The saddle, now free of a crowd

After a nice long, sunny day’s walking in the hills, I got the last bus back to Belfast. It was an incredible day to be in the Mournes and one I won’t soon forget!