It’s been around three years since I last camped on Slieve Binnians summit. Joined by most of the Hikersblog team and a few friends we ventured off from Carricklittle following the track which borders the wall. The weather was changeable with intermittent light showers followed bursts of sunshine – truly Irish weather at its best. It’s no secret that Binnian is my favourite Mourne peak and it felt great to be trekking towards its tor crowned summit.

The view from Slieve Binnian.

As we journeyed upwards I began to find my pace and settle into the ascent, my pack now more comfortable and less of a burden to carry. Taking the opportunity to catch my breath I gazed back across Annalong Valley, which offers walkers breath-taking views across the Mourne range. Far out in the Irish Sea heavy showers could be seen across the horizon and I was thankful the higher ground had avoided the rain thus far. 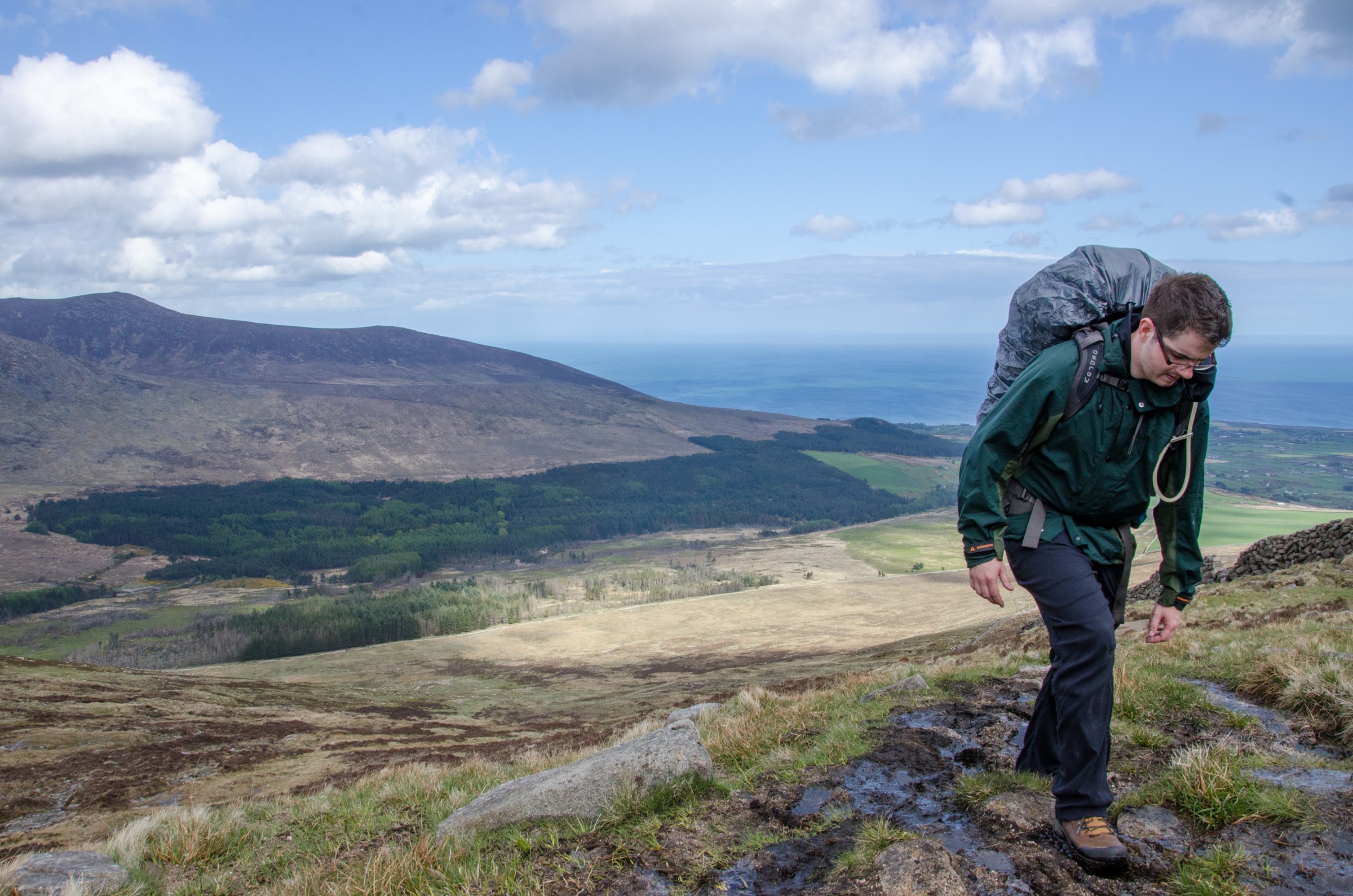 Pausing for a’ breather ‘ on a suitable boulder I noticed some unusual stone: blackened and translucent with a hexagon shape. On further investigation it appears to be Smokey quartz, something that I’ve never encountered before. If you’ve ever climbed Binnian along the wall there a particular steep section just before the summit comes into view, in some ways I think it’s the mountains way of getting that little bit more respect or sweat out of you.

boundary wall on the ascend

As well as camping we hoped to get some climbing done and as such hauled the necessary ropes, nuts, cams and kit needed for such adventure. My contribution was to carry the rock shoes (one pair) of which I did gladly knowing the bulk of the load was shared on the younger, fitter Hikersblog team. Reaching the summit crest a batting Southeasterly gale greeted us and reminded us to respect the weather. 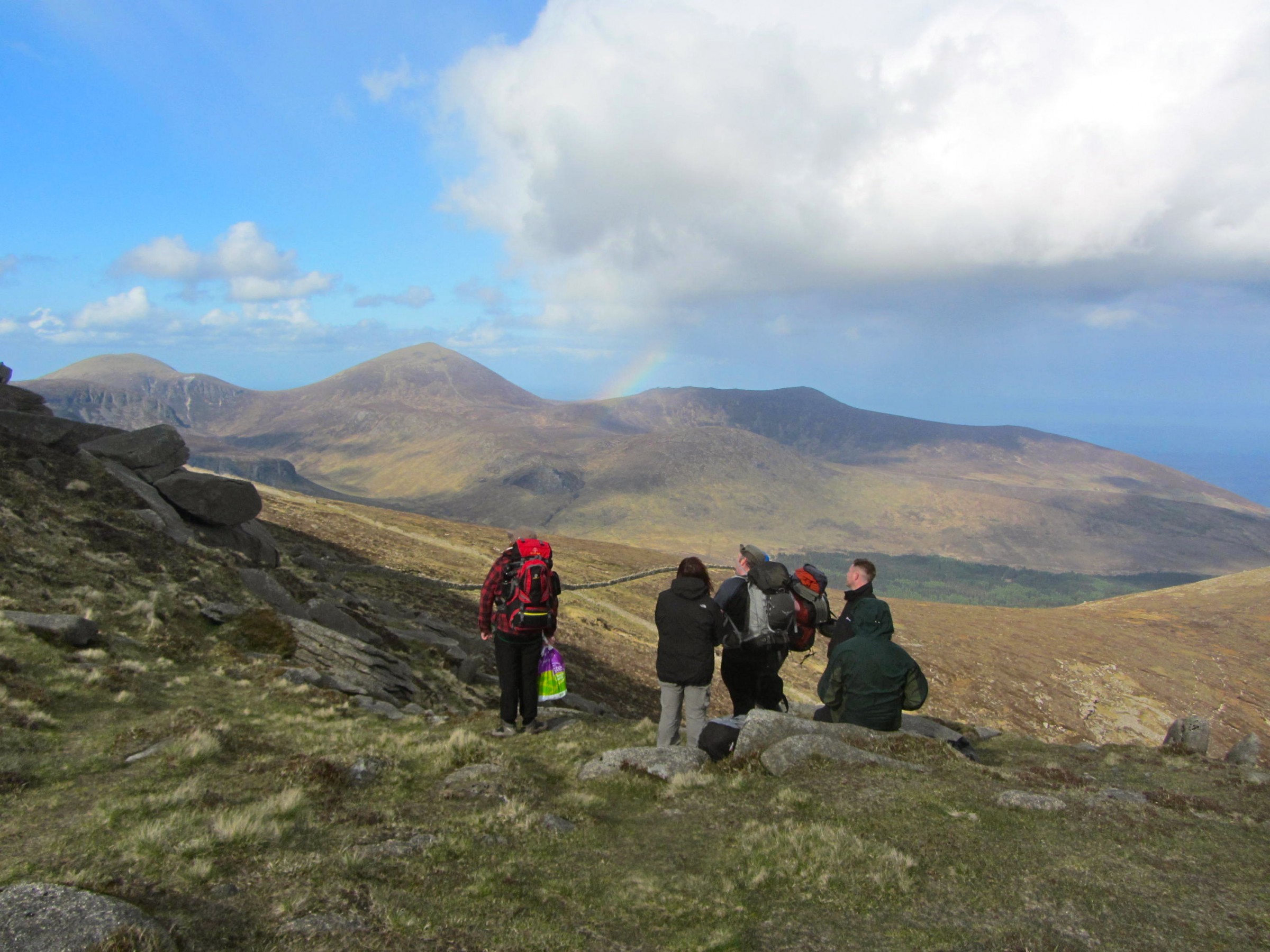 Time to relax before the summit

Binnians summit has a collection of several different large granite tors, which can in some way shelter any potential camper from the elements, it’s just a case finding suitable ground to pitch your tent or bivvy and getting out of the prevailing wind. A few of the ‘die hard’ lads were going to bivvy so for them it was going to be as easy as setting up minutes before settling down for the night. Ive had a go at the auld bivvying before and prefer the comfort and spaces round me that a tent allows me .We all pitched in and assisted in getting the tents erected which can quite a task under summit winds. With all the tents set up and the charcoal lit we settled down a well-earned brew after boiling water using Eds MSR reactor stove.

Eamonn and Oisin ventured around the summit tor looking for a suitable rock face in which to practice some climbing, soon after I joined them as Eamonn now in full climbing gear scaled upwards in what seemed effortless manor. Rock climbing is something I’ve always wanted to try, the very idea of challenging yourself to scale hard cold granite sounds great, placing you’re trust in skill, rope and metal trinkets placed into rock to secure yourself. Soon after the climbing began it ended as it started to rain which left the granite wet and dangerous. 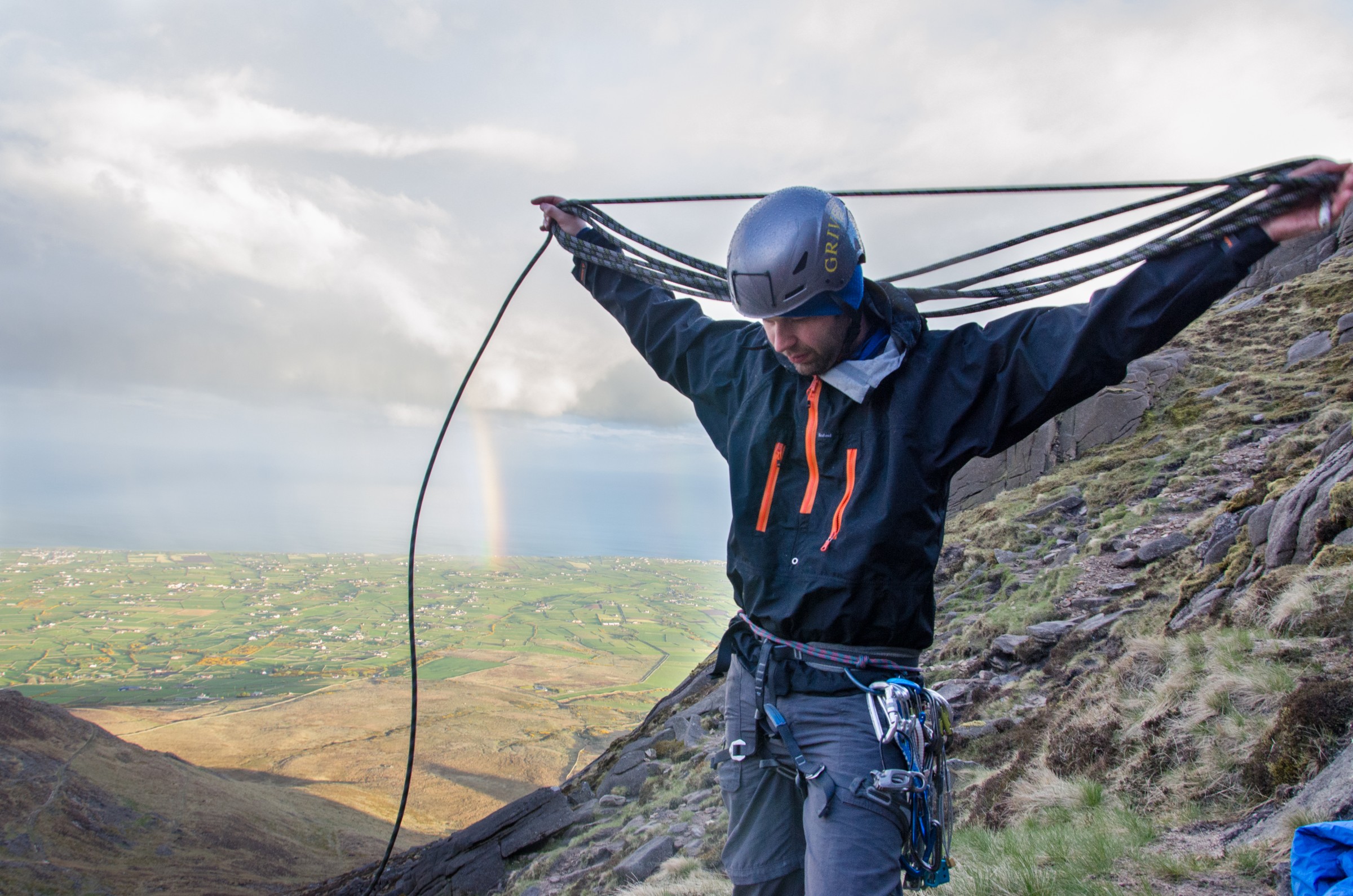 Eamonn coils up the climbing rope

I guess it’s just one of those issues you have to respect, not allowing yourself to push on regardless of skill or knowledge.There’s something very special about camping on the summit, somehow you feel like a member of a very exclusive club with all the privledge that goes with it such as 360 degrees view,watching the setting sun as it drains into the horizon. 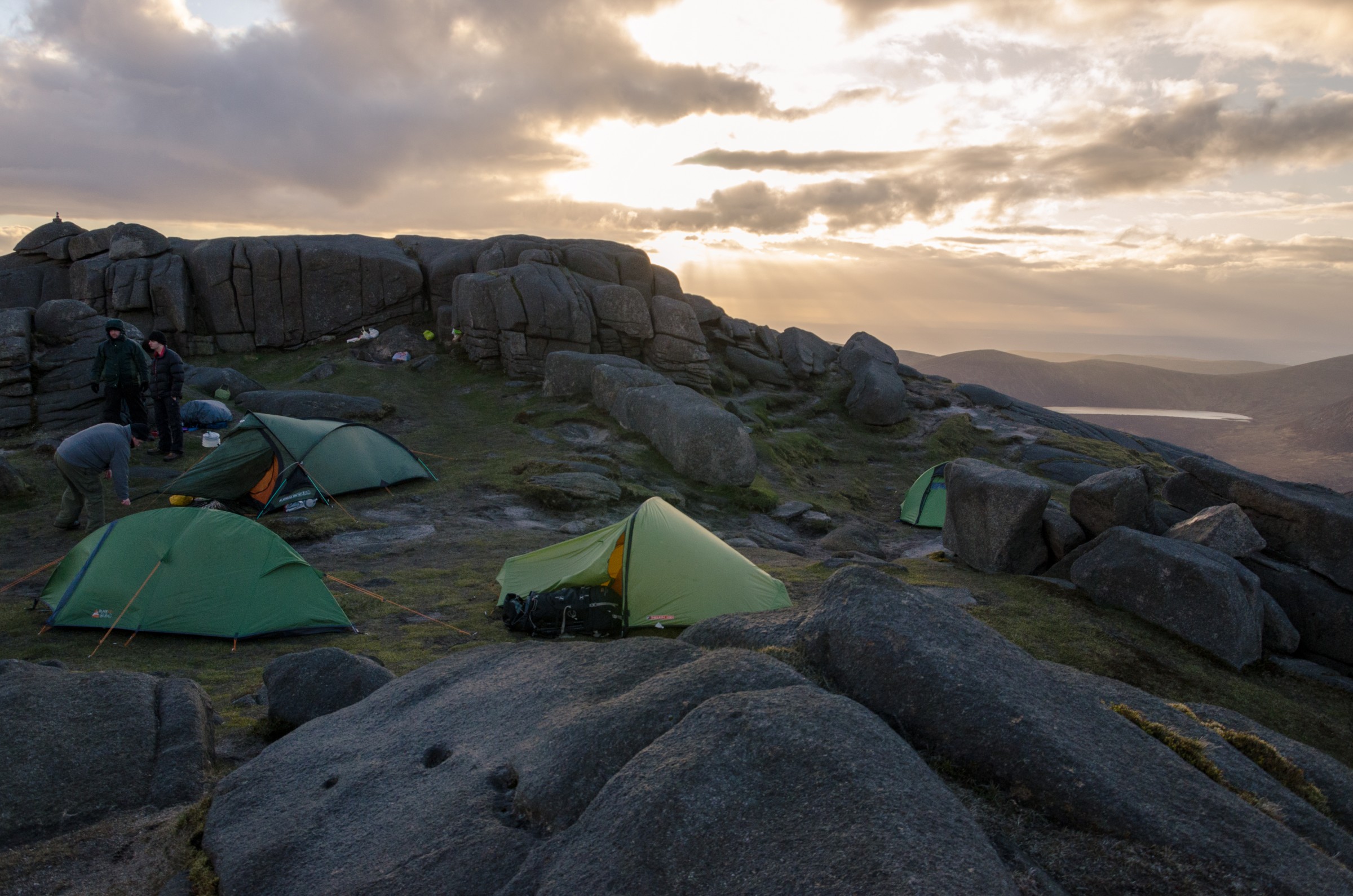 Room with a view

As with most camps our resident chef, Spud set about cooking us a fine array of meat on the portable BBQ that we hauled up. To any passerby it would have been a strange sight indeed, no boil in the bag dinners were on the menu for us, tonight we would be feasting on sirloin steaks, beef sausages, burgers and chicken wings all prepared by Spud who always assumes the chef role and does an excellent job in doing so. As usual we watched the setting sun and discussed the worlds politics and how everything could be sorted out epically after a little red wine. Around 11pm we witnessed a helicopter skim above Silent valley and Ben Corm reserve before rising from the valley basins long the Brandy pad and across the rocky summit of a Chimney before flying out to sea. This aerial display happened twice in the same sequence, we guessed it was some sort of training exercise. With our bellies full we turned in for the night a little after 1am.

In keeping with my normal routine I selected the best of Pink Floyd from my IPod which is well over four hours long (sorry chaps) and quickly nodded off into a deep sleep. I awoke around 5am to the sound of rain pelting the tent and rolled over preferring a little more shut eye until I finally got up at 6:30am. Now the overcast damp morning had been replaced with a brighter sunny start to the day. To my surprise a few of the lads were already up and set about getting themselves some breakfast. Apparently somebody did a lot of snoring, which could be heard together with Pink Floyd; I personally never heard a thing!

Usually I like to watch the dawn approaching but the morning weather had other ideas as the sunrise was  replaced with rain and mist, then swapped back to sunshine as the weather battled it out. As with the night before there was a biting wind that left a chill to the bone and I found myself sheltering from it wherever I could. Armed with a coffee,( camping essential) I watched racing clouds journey seawards as rays of sunlight broke through onto the valleys below.As soon as Spud awoke he again donned the chef hat and set about rustling up the remaining meat supply of burgers and sausages which made for a fitting breakfast and helped fuel us to start packing up for our way out of the mountains. 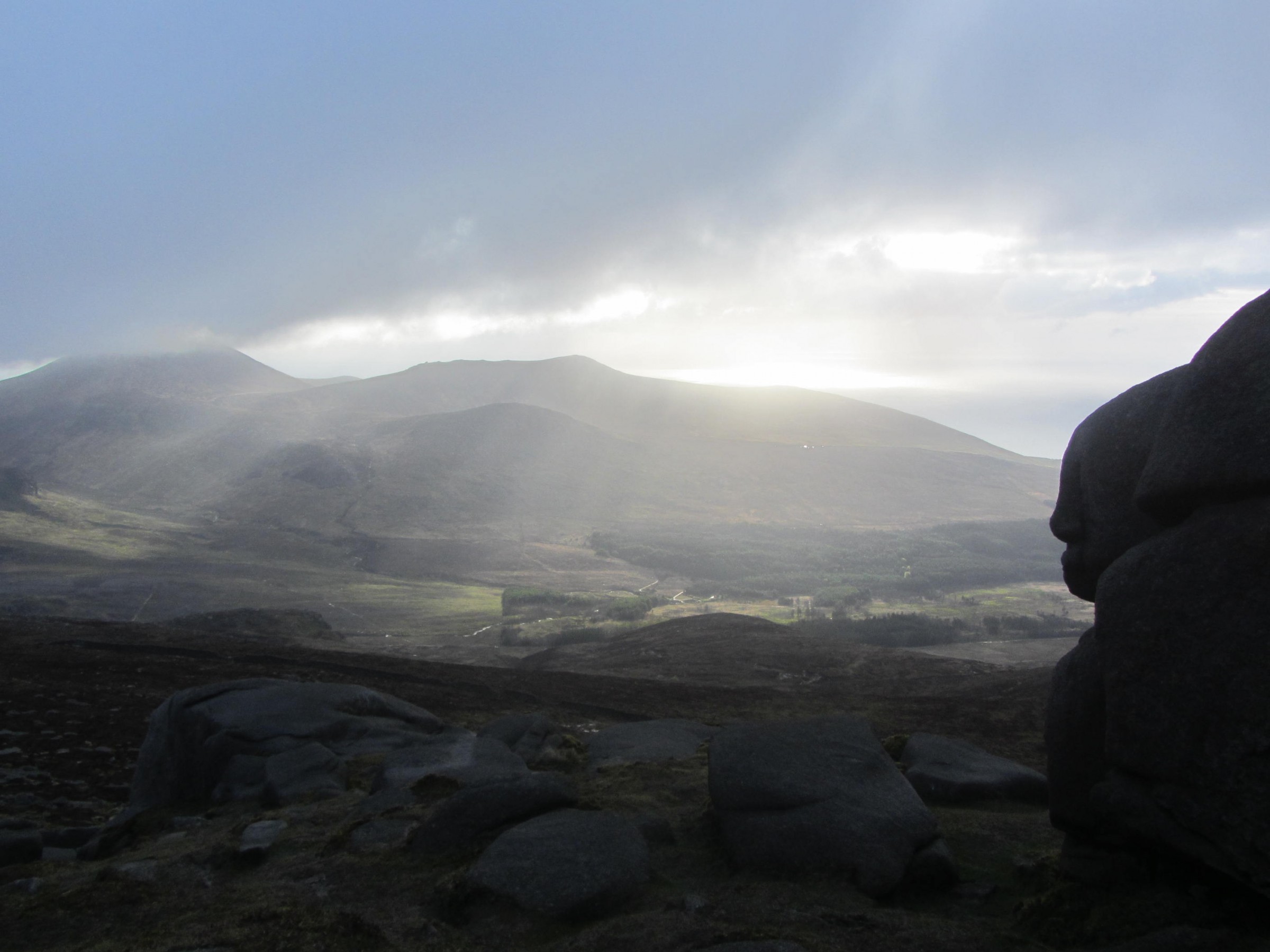 A few of the lads and I set off first, with our return trail which was to be past the Back Castles, the North Tor and Blue Lough. Sitting around camp too long I began to ache and was glad to be moving at least at a reduced speed. Slieve Binnian offers the walker marvels to the eye with its majesty rock formations and even though I have climbed it many times over the years I always find new appreciation for this old friend. 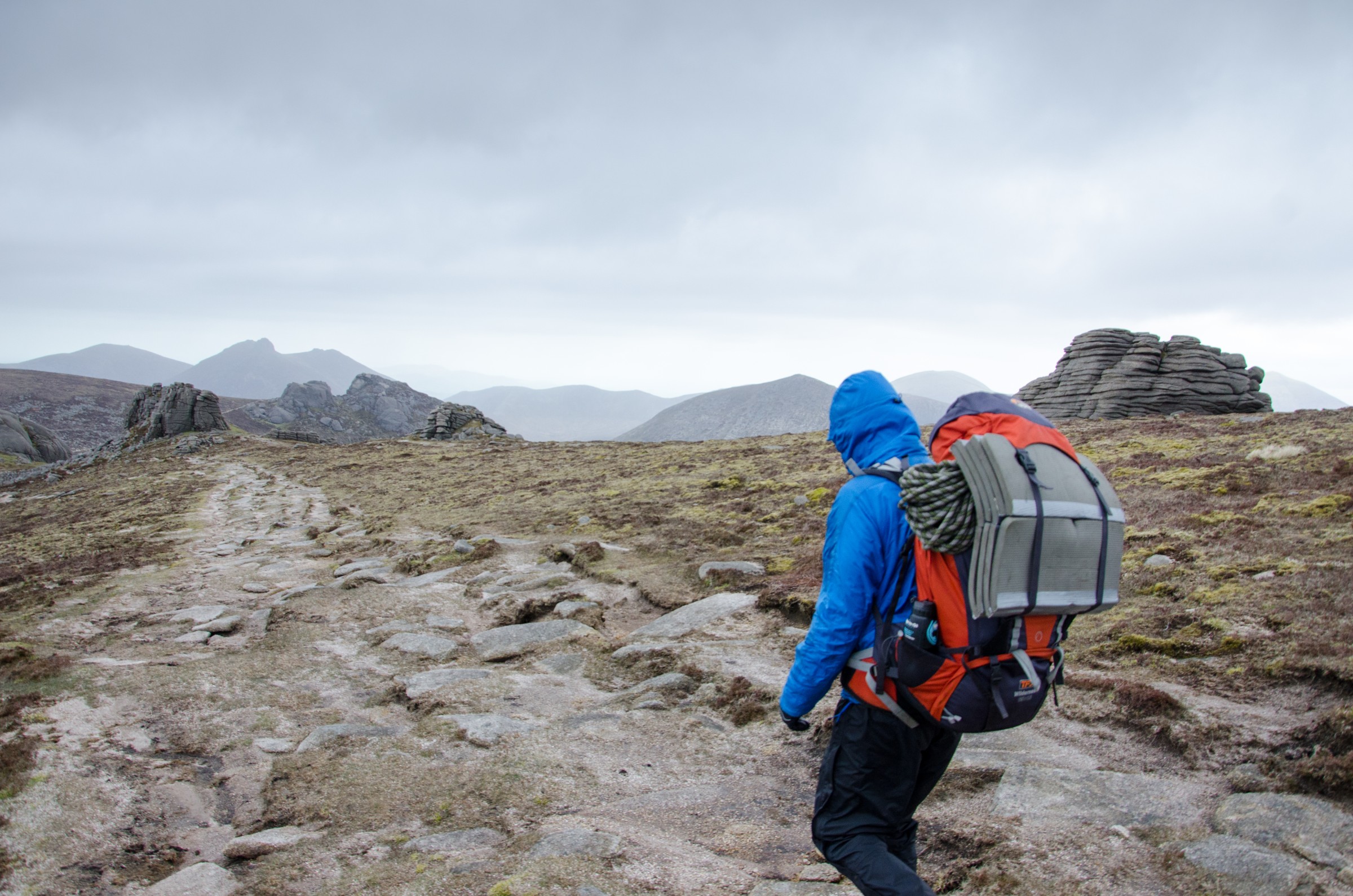 The trail to the North tor

The trail from the summit to the North Tor is easy underfoot; crossing over a boundary wall before offering up views towards Binnian Lough. Reaching the Huge North Tor a hill runner sped past Ed and we both commented on how much skill and physical demand hill running must take on the body. 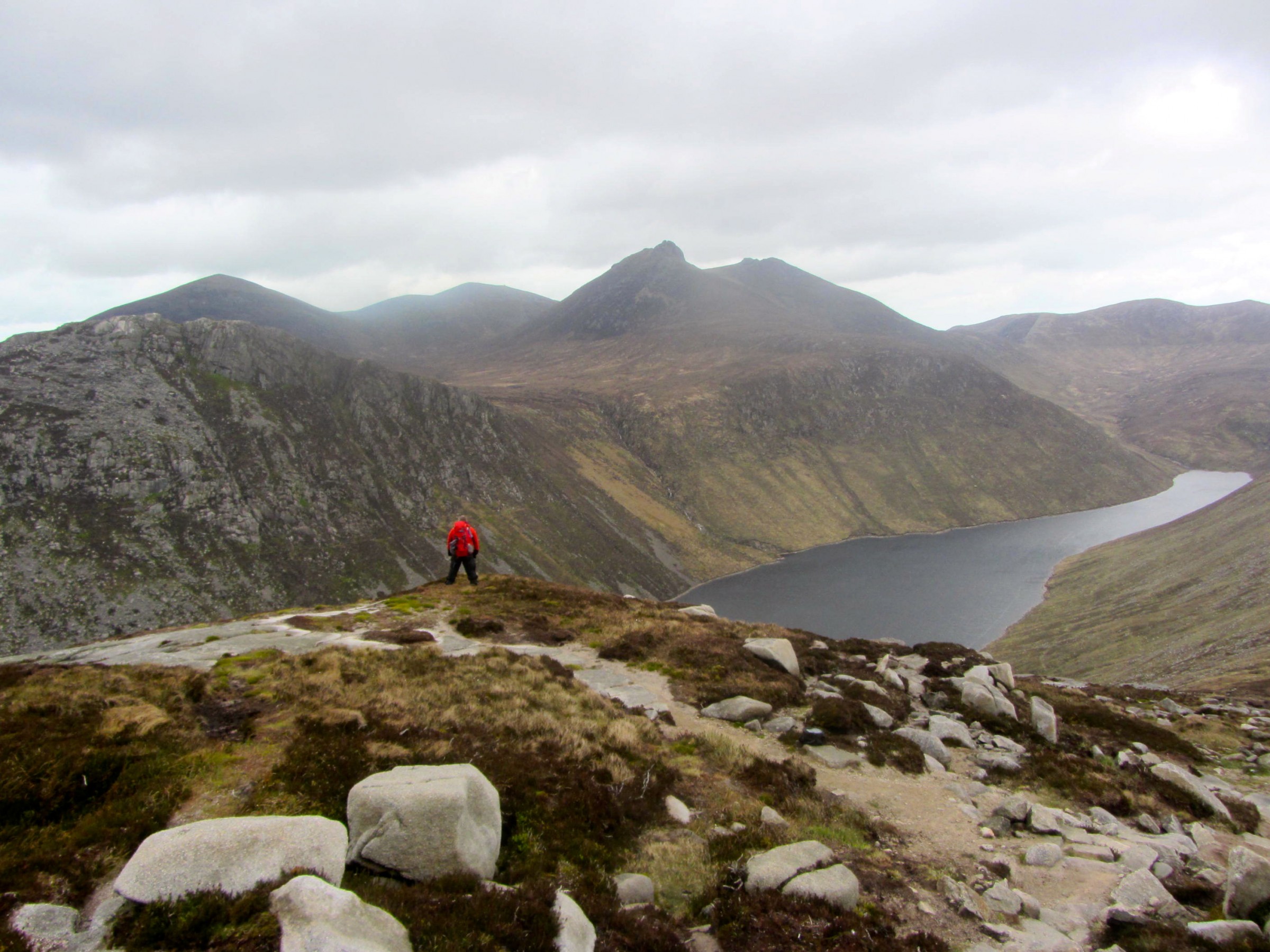 Resting against a boulder we gazed down the valley towards Ben Crom reserve and Blue Lough far below. The gradient drops a lot at this point of the walk and foot placement becomes an issue as we we’re carrying heavy packs. I took my time descending before finally reaching the Col were we waited for the rest of our friends.

The tiredness was beginning to kick in with everybody so we paused at Annalong Wood for a coffee and briefly removed our packs from our shoulders.Feeling somewhat refreshed we began the last half mile back to the cars. Now those among you will understand what I mean by saying that the last half mile seemed to stretch out further as we walked – aches and pains were becoming more notable as if our mortal shells were reminding us we were still human.

Reaching the car park I rested on a picnic bench as the group packed out the cars with the kit. With the usual hand shakes we parted company, yawning as we got into the cars. I was glad of the aches and the tiredness, as it reminded me of how it was earned: with a reward of memories in the mountains with a great bunch of friends.