We awoke to a dull and cloudy morning and peered out the condensed perspex window from the sleeping cabin we had stayed in the night before. It all started with the intention of camping and making our way around County Donegal ticking off some walks as we went, but the weather had different plans for us in mind.

Storm Gertrude was arriving along the coast of Ireland and it certainly made it’s presence noticeable. Strong winds, heavy rain and even snow were forecast during the time we planned to stay, so both our hillwalking and camping plans were at risk of having to be cancelled.

To try and salvage an enjoyable trip from our time off we planned our walks each morning to match the weather that day.

On day one, after grabbing a bit of breakfast in Dunfanaghy we were soon on our way up the small winding road that leads to the small car park close to Horn Head. The foul weather was easily noticeable with gusts of winds blowing the car and windscreen wipers doing their best to keep the windscreen clear of rain.

After some brief hesitation on arrival at the carpark we got out of the car and threw on our hats, gloves and waterproof layers in an attempt at keeping the elements at bay. 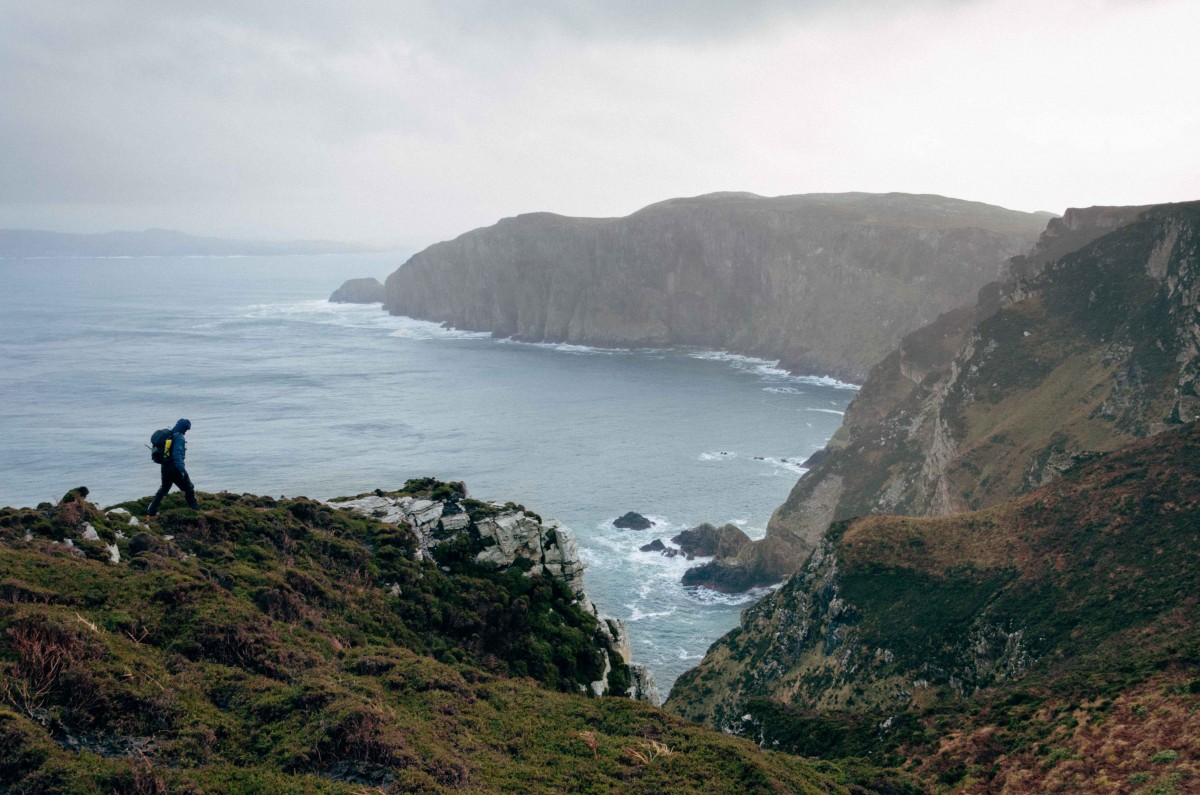 Walking along the cliff tops we were blown about with the high winds and heavy rain, it was a stuggle to walk in a straight line for most of the day but at the same time it was thoroughly enjoyable. When you spend a lot of time outdoors and enjoy numerous camps a year without issue, it can be a refreshing change to be knocked down a peg or two by the weather when it puts you in your place.

The views throughout the day however more than made up for the rough weather. Dramatic clifftop views and crashing waves followed us as we walked around the coastline and along the meandering track. 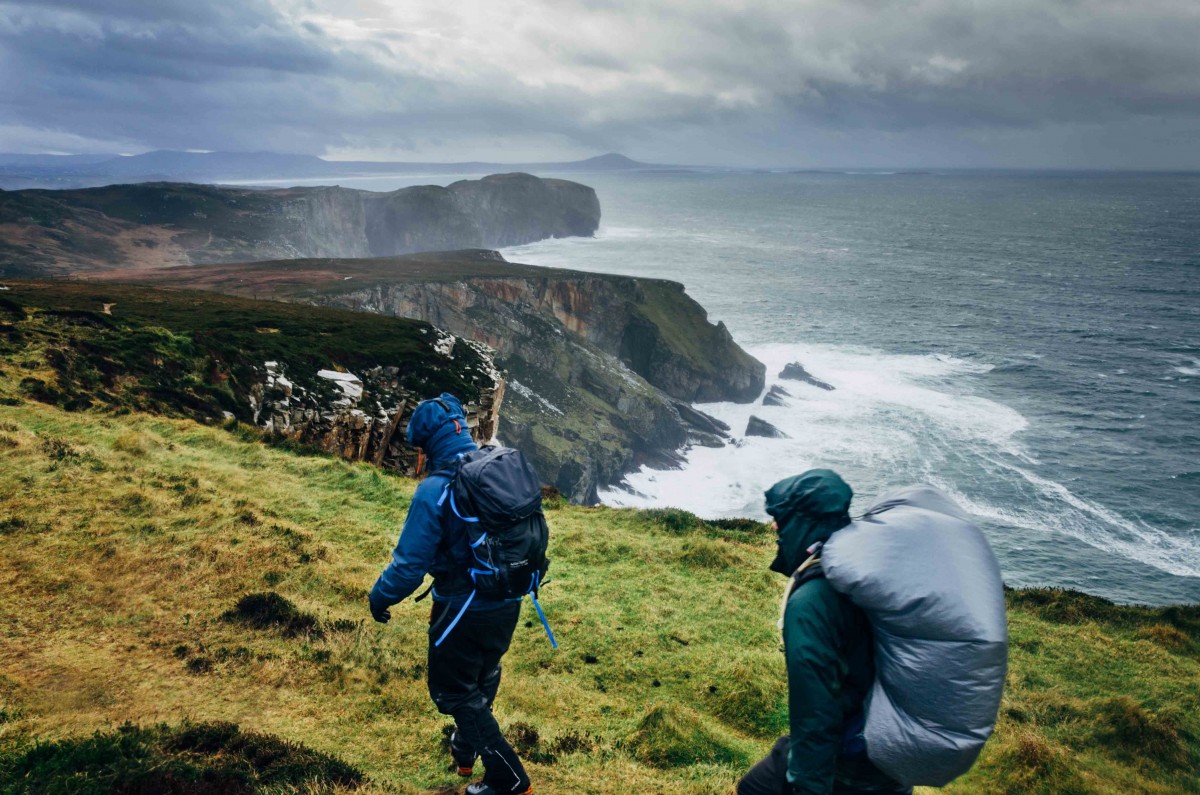 The wind was so strong that at one point we nearly lost a pair of gloves when trying to pass a spare pair from one rucksack to another person. They very nearly blew off the edge and into the sea, but thankfully they fell short on a piece of bush and we were able to recover them with some teamwork, a little bravery and a big stretch. 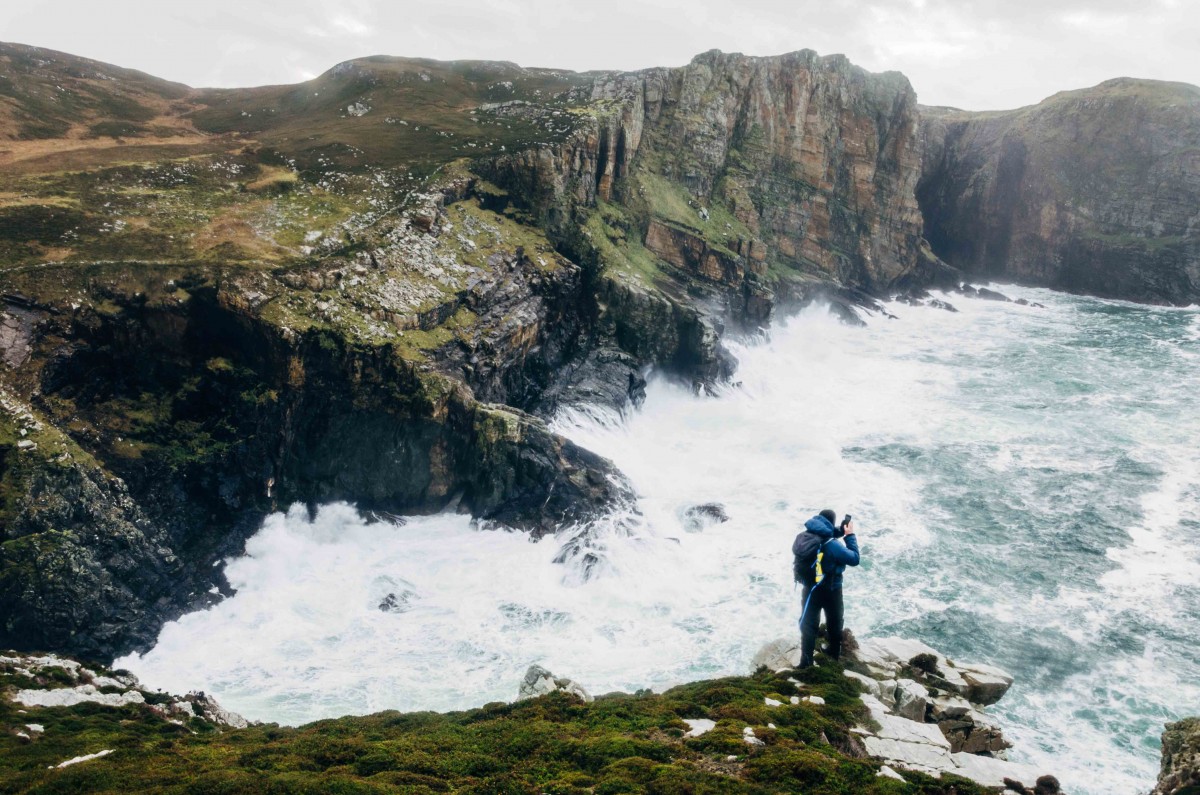 As we continued around the coastline the waves seemed to only get bigger and rougher and we watched in amazment as wave after wave crashed against rock producing some amazing sprays of water. The wind was even hitting a waterfall so strongly that the water was blowing back up onto the land!

Thankfully the rain and cloud broke away for an hour and gave us a chance to sit and have a bite of lunch at a rocky shelter along the coast. It wasn’t until later looking at the map that we seen this could have been one of the megalithic tomb that overlooked the sea; this really showed just how far back the history of man and this wild shorline of the country stretched. It made me wonder how much, or how little, it would have changed since the megalithic times.

After some lunch in the afternoon our thoughts turned to getting back to the car before the winter sun set and the temperatures really started to drop. We followed a fence along a faint track in the grass before turning away and directly cutting across the rough land that let back the car park and the warmth of the car that awaited us there. 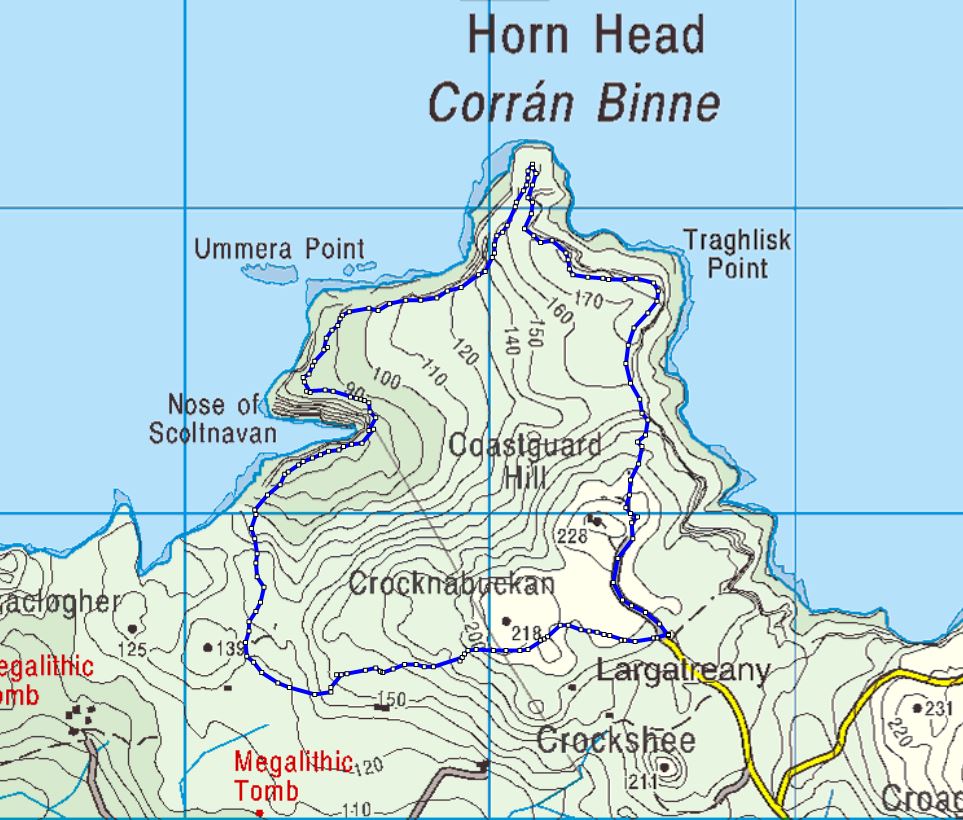 Overall we only covered around six kilometers, but it was tough going with the weather and we had plenty to stop and admire. The January weather may have put others off but after looking back on it we all agreed that it was one of the best times to visit and see the environment in it’s most active state.