After witnessing the strength of the wind and rain on Horn Head the previous day, we didn’t feel guilty at all about staying in a B&B the night before. As much as we would have loved to camp in the wild landscape of Donegal, the weather was simply not permitting and we agreed that we would rather have a successful walking trip instead of a disaster of a camping trip.

Originally planned to be done the previous day, but postponed due to the weather, we now had a mountain to climb and an improving forecast to do so in.

Just like the day before, we made sure we got ourselves a good breakfast in the local town of Dungloe and were soon making our way across the barren landscape towards Errigal.

After winding our way up the road towards the car park situated at the bottom of Errigal, we were soon making our start through the deep bog that surrounds the bottom of the mountain. 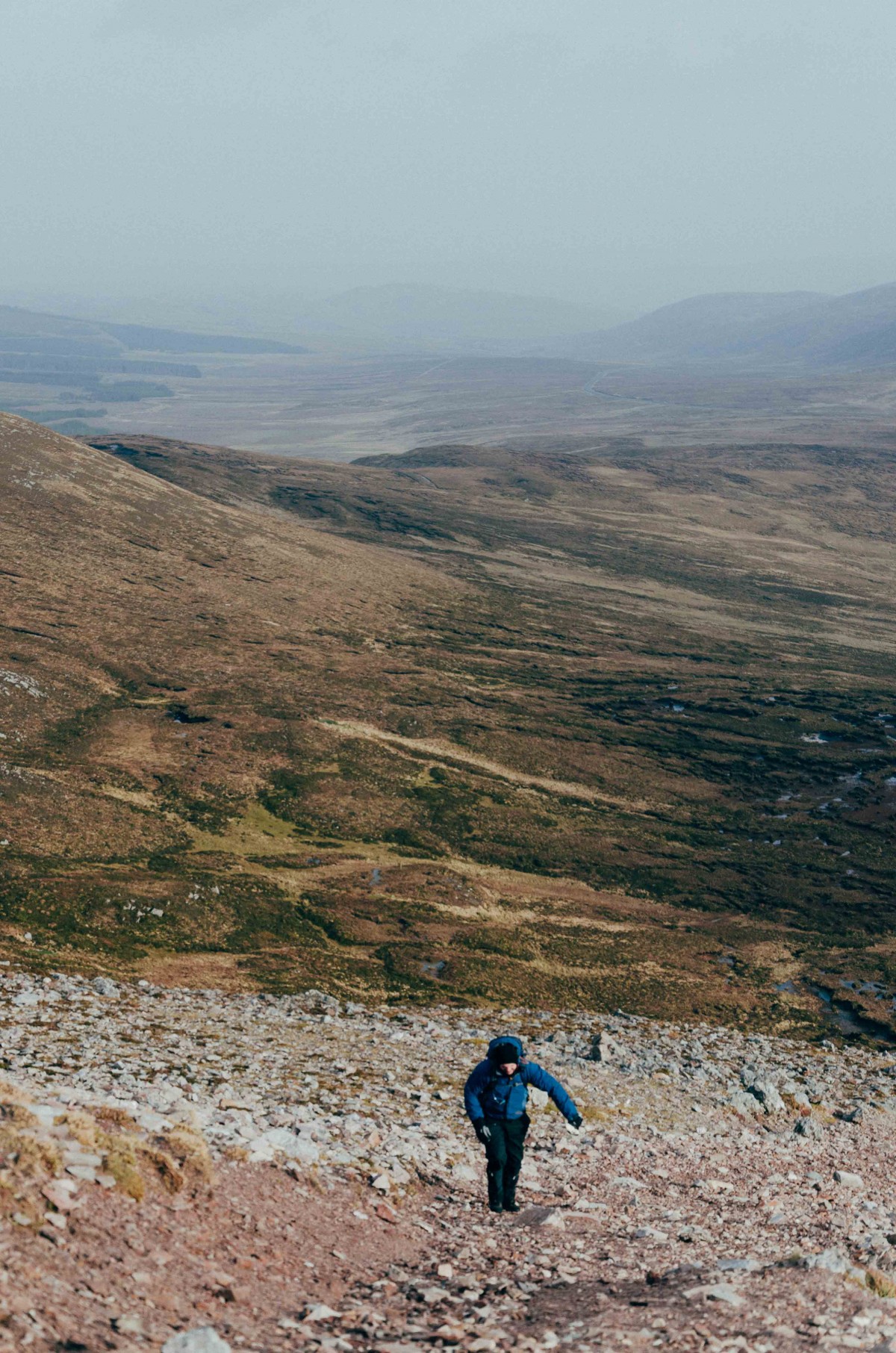 The wind was certainly no different from the previous day and it only seemed to get stronger as we moved higher up the mountain; we nearly lost a hat this time!

After perhaps half an hour of bog traversing we made our way up the distinctly characteristic scree slopes which made a pleasant change from the bog before it. The slope certainly got steeper as the climb progressed and it was a sure way to warm up your legs.

Some of the rock formations were rather strange and varied, we seen the likes of sandstone rocks right beside quartzite showing just how varied the geology of the mountain is. 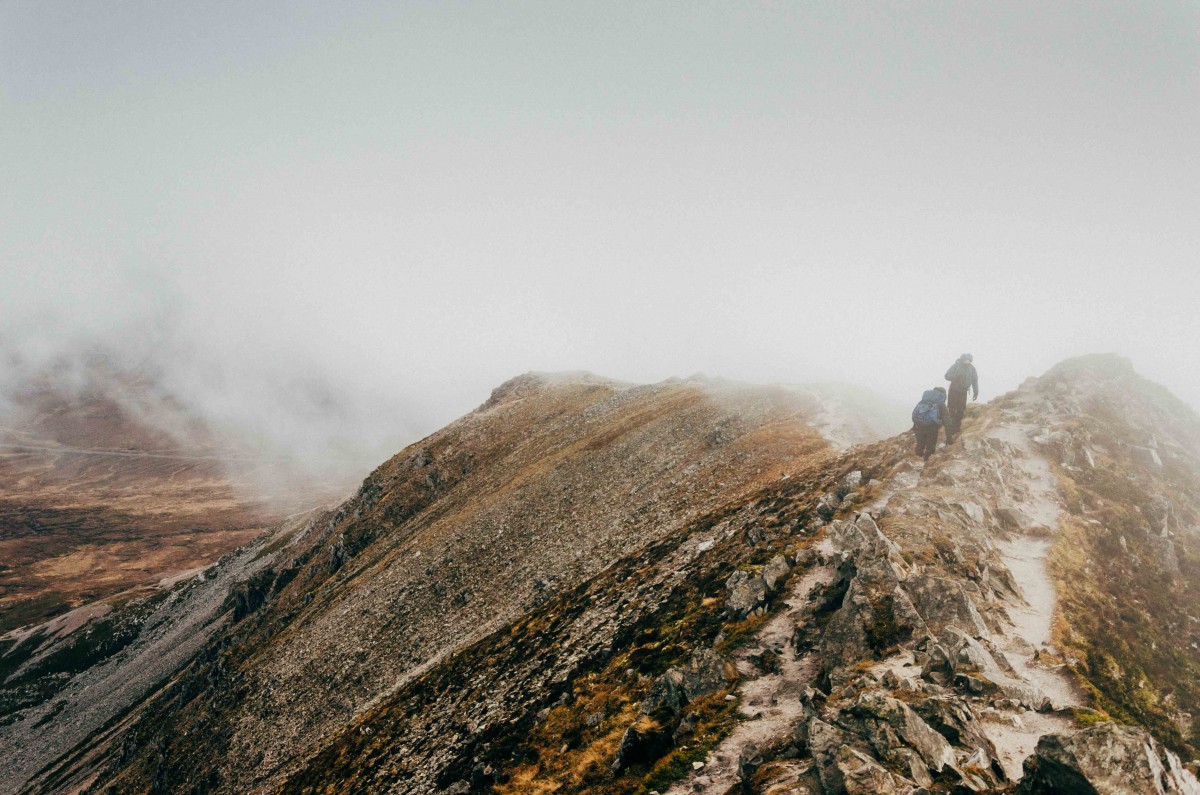 After a continual plod and a couple of quick stops, we soon found ourselves crossing over the suitably named “One Man’s Pass” in high winds towards the summit. After cautiously crossing the pass we sat ourselves down and enjoyed the view from the top.

When we sat ourselves down the wind suddenly dropped and we experienced a strange situation where we could feel the wind gust over our heads only when we stood up at a certain height. The shape of the mountain sent the wind upwards in a strange manner.

Just as we finished our summit lunch break and were packing up to head back down the dull skies that had hung above us before suddenly started to get brighter and the wind increased in strength. Suddenly a big hail storm opened upon us and our faces were soon stung by drops of hail blown about the place by the bitingly cold winds.

It was at this time that cloud started to creep up one side of the ridge and create a strange weather show in front of us. The heavy hail and clouds only made keeping the camera lens dry and clear even more of a challenge and I found my cloth to wipe away the moisture with had become sodden in my pocket which I had mistakenly left upon and collected a big bunch of hail. 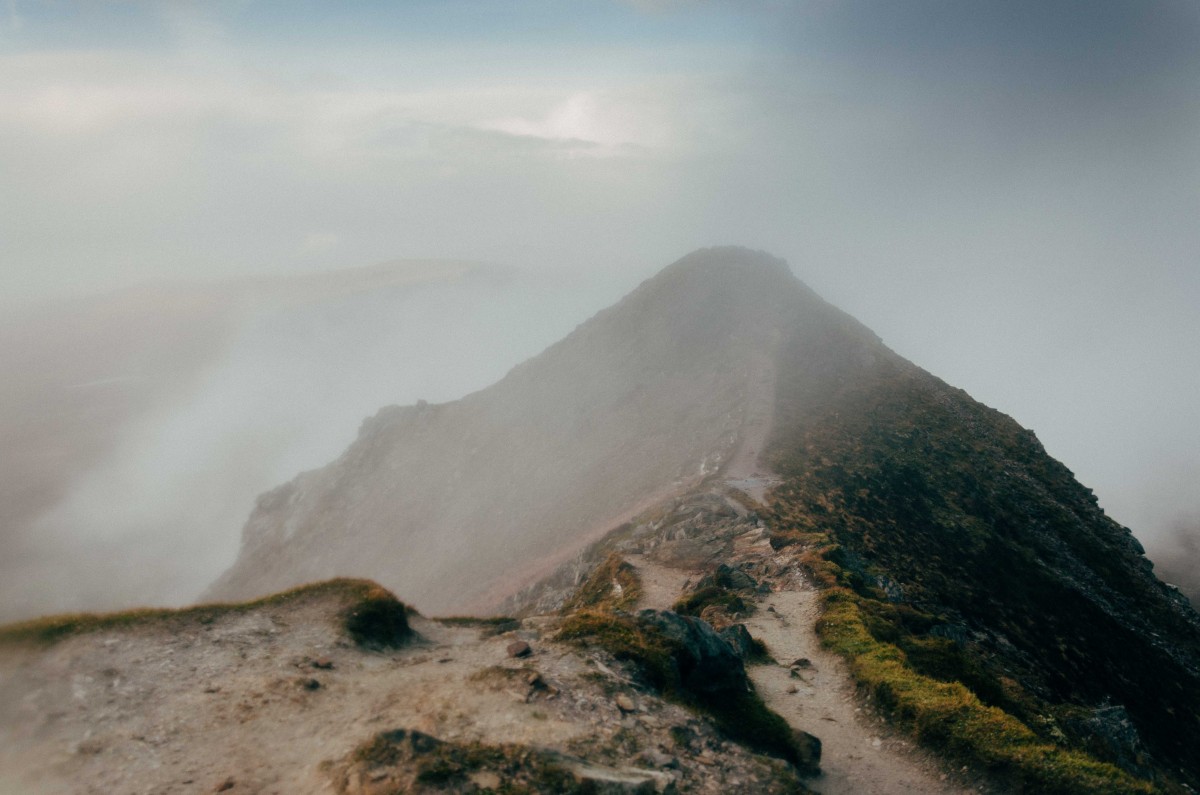 As much as this change of weather was nasty to bear on the exposed skin, it did provide us with a clearer sky to improve the view. We could now see across to Muckish and the whole Derryveagh  mountain range and made comments about how that range would make a great walk along it’s tops: one for a future trip perhaps?

The descent down the mountain was nearly as tough as ascending it, with the scree and high winds it made for a tough job on your knees and ankles. Despite the tough descent we made it down in good time and decided to slightly change our return route by aiming for the lesser boggy patches of earth which we could spot from the heights above.

Just as we were close to finishing, the sun broke through the clouds and cast a beautiful golden light across the landscape. It was a really nice end to the day and it made a nice change from the usual dull grey we had walked in earlier. 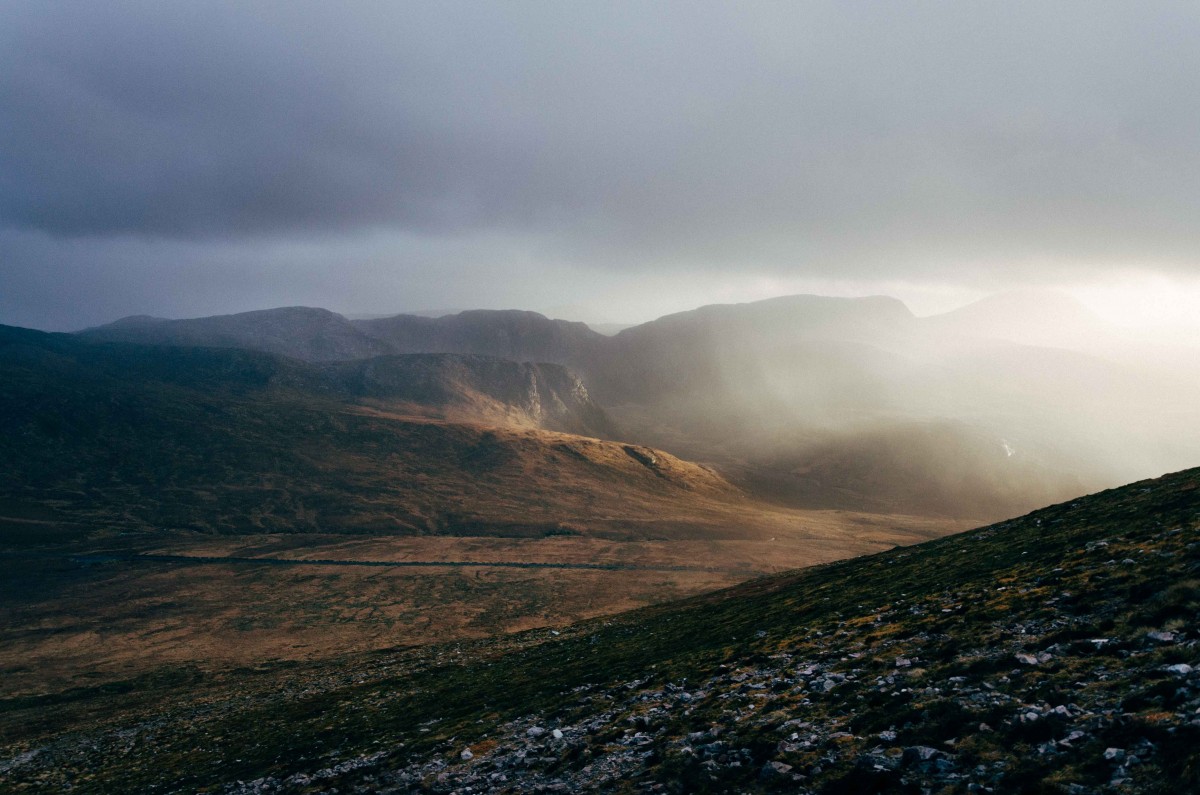 After returning to the car and setting the heater to full blast we had a quick chat about what we were going to attempt the next day. We talked about walks in Glenveagh or perhaps along Derryveagh mountains, but in the end we all agreed that we had always wanted to see the Slieve League cliffs. So it wasn’t long before we were making the journey further south on the N56 towards Killybegs and Slieve League.