After months of hiking to camp with a heavy pack every time I saw the hills, it was time for a proper day walk with a lighter weight. I spoke to my friend Chris and we decided on a circuit around Silent Valley, taking in Carn and Muck en route.

We arrived at Silent Valley car park quite late at around 13:25 and knew our route would involve some night hiking. I threw on my new Aclimatise Osprey jacket, eager to test it in the colder temperatures – and we set off. 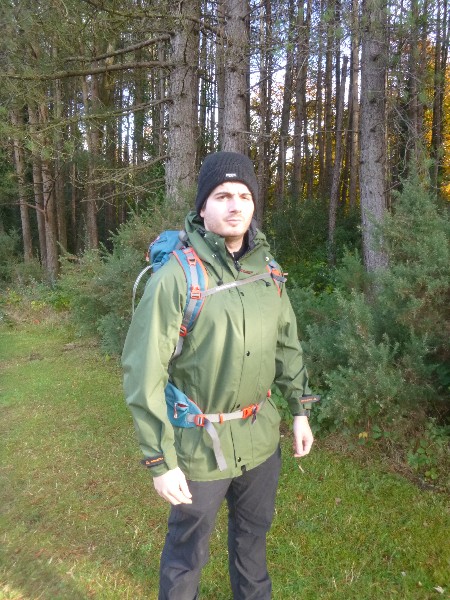 Ready to set off

Winter had definitely arrived. There was a sharp coldness in the air as we walked down the path towards the reservoir. There was very little wind and we warmed up quite quickly. Some day I’ll manage to walk past Silent Valley without stopping to take a photo, but not this time. 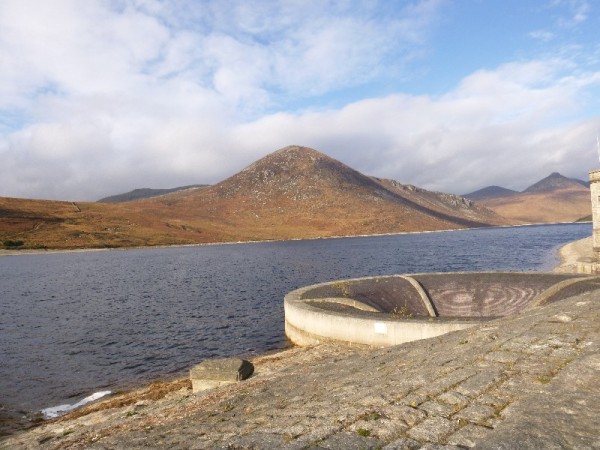 The ever scenic Silent Valley

Eager to prepare the legs for the open ground that lay ahead, we set a good fast pace on the nice flat tarmac path, hoping to have our legs nicely warmed up before the slippy tangled bog presented itself to us. The lack of wind (or even a breeze) didn’t leave me clammy and reaching for zips like I’m accustomed to with my Goretex jacket. I reached a nice warm equilibrium and when the wind did come the temperature lowered only slightly as more of the vapour escaped.

Chris was marching along in his trusty Primaloft jacket and I’m yet to know how he does it, I’ve never managed to wear anything insulated while active without sweating profusely – perhaps he was and just hadn’t mentioned it.

We crossed the river out into the open ground of the Mournes, of which we had plenty ahead of us before we would reach a track. We kept moving and had forgotten the great view which was forming behind us. 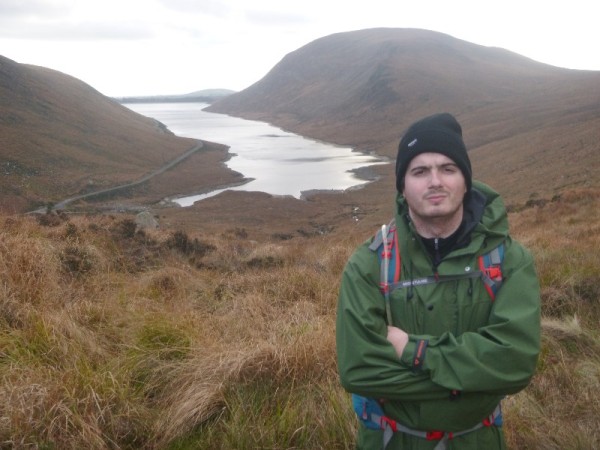 Getting up out of the bog

Our crossing of the open ground after the bog was filled with the familiar squelches and stumbles we’ve all experienced. Chris took great satisfaction in the fact that he chose to buy a new pair of gaiters in Belfast before we headed down. Seeing the amount of muck which got around my shoes and trouser legs, I envied his decision slightly.

Most of us tend to draw amusement from the simple things when in the hills. The fact that you never quite know just how far your foot is going to plunge kept us laughing as we trudged on. There was quite a mass of open ground left to cover before our first hill, but it was fun having to jump across all the little boggy streams and wet patches.

After some hopping between sods of crumbling peat, tentatively creeping over moss and lifting our feet over long grass, we found ourselves at the path between Slieve Loughshannagh and Carn. 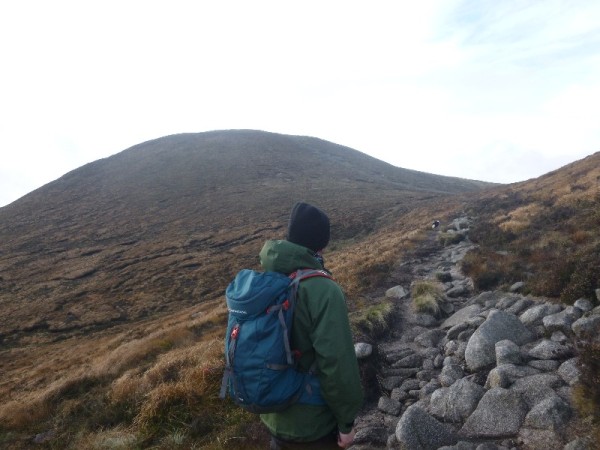 A path! Such a treat

We decided Carn would be our lunch stop and pressed on over the false summit and onto Carn itself. Beyond the beaten track meals were on the menu as we’ve always found ration packs to be more sustaining than the likes of instant noodles. Combined with the quick boil time of the Reactor stove and the fact that the wall provided a wind break, our lunch was pretty damned decadent. I even lay back against my pack and used it as a back rest while we ate. 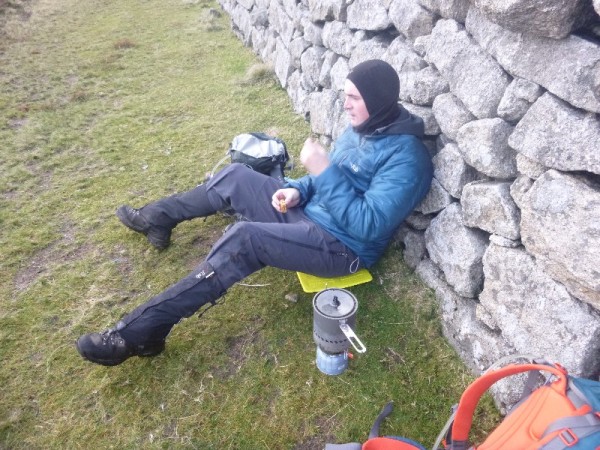 Chris enjoying the wind break from the wall

We packed up and headed on towards Slieve Muck, well fueled and our packs feeling even lighter than before. Chris passed a few mucky puddles and performed his usual trick on his dog, Scamp where he threw a stick into the puddle to be fetched. This always seems cruel at first until you realise the dog’s tendency to ignore dehydration and pass a water source. Any chance of convincing him to drink is a good idea. If I were able to drink puddle water I certainly wouldn’t pass it after a taste of ready meal chicken curry!

When we got to the saddle between Carn and Muck I took out the GPS and it read 32 minutes until sunset. We had a choice, either come off at the saddle and head back for Silent Valley along the Miners’ Hole River – or push for sunset on Muck and head down the Bann’s Road and return via the roads. We decided to press on and try to beat the sunset to the top of Slieve Muck. My legs were reminding me that a heavy weights session was inadvisable close to a hike, but I felt we should at least try for the sunset would be our reward.

We passed an old spot where some of the blog team had stopped for a barbeque earlier this year, a rocky formation which would probably make great scrambling. Recalling great memories of times shared with our friends on this hill we pressed on for the summit, hoping we could get there before the sun went down. 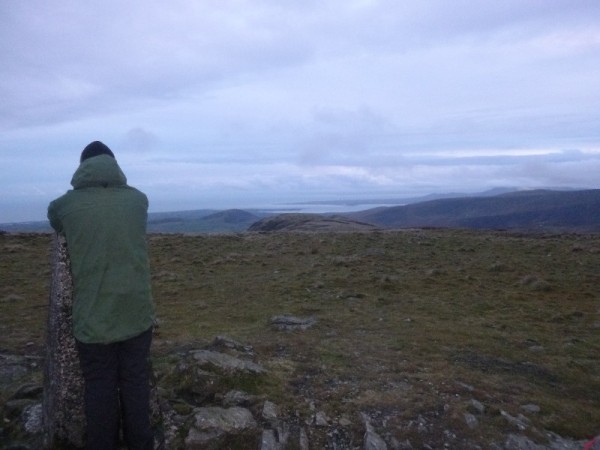 Around 25 minutes later we made it to the trig point at Slieve Muck, just before sunset. After taking a few moments to admire the view, we headed down the far side of Muck to make for the Bann’s road. We debated with ourselves whether to have our cake and eat it and go home via Slievenaglogh, but we decided too much night navigation would push us out for time and if we set a decent pace on the roads we would be home for a reasonable hour.

Walking Slieve Muck in the dark brought back memories of a much more gruelling kind, our Hike of the Mourne Wall Challenge in a day earlier this year. As we picked our steps down the steep, slipperly slopes of Muck we were reminded why it was so named and of how memories of previous trips are formed and recalled so easily. The physical exhaustion felt during the challenge walk earlier that year must have seared the memory of Muck’s far side into me permanently as almost every choice of foot placement brought back memories of how truly wrecked I was the last time I took this path. Granted I had came at the hill differently for the challenge walk, but the surroundings were intensely familiar in the fading light after sunset.

We then reached the gate at the Bann’s road, where it took some convincing to get Chris’ dog to actually pass through the gate rather than climb the wall. 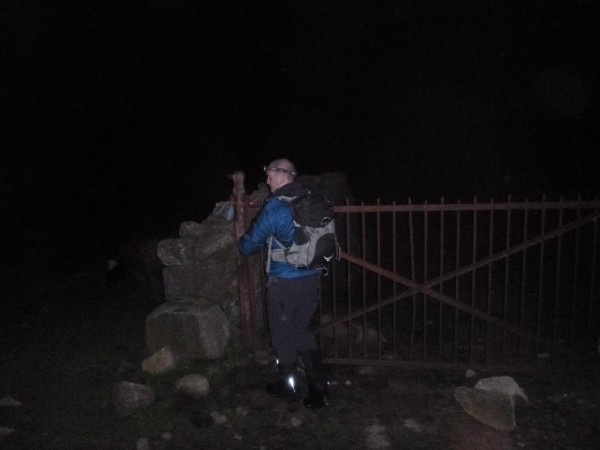 Florescent striped gaiters – what will they think of next

We pressed on down to the road where we found the even ground a great opportunity to pick up the pace a little. Normally by this time in the evening after a day’s walking I would start to feel quite cold due to loss of energy and reach for a fleece. I seemed to have held my temperature quite well however and was comfortable and dry in just a coat and light merino baselayer despite the cold.

When we reached Silent Valley we were greeted by the same ranger who let us into the car park that morning. He greeted us with the kind, relaxed laugh of a man who knows that plans change in the hills. Chris told him “we took the long way round” and he smiled and waved us through to the car.

It had been some time since I had such an enjoyable, challenging day in the hills. It’s also quite rare for me to hike on so little food, not a steak to be found on this walk, Chris sure was fond of his ration packs.

Here’s a nice candid shot of me looking every bit as tired as I felt, but admittedly a whole lot happier. Scroll down further if you’d like to see our route map. 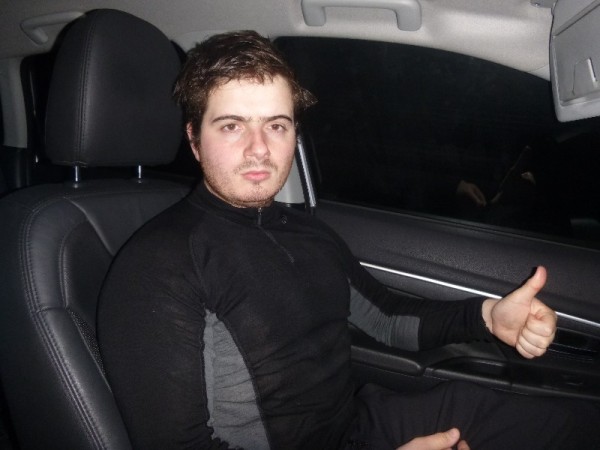 Tired, but a lot happier than I seem

The route is displayed below in an interactive panel. Use the slider to scroll in or out, or the dropdown menu to change the map type. You can also download the GPX file to follow our route on your next hike, but please do bring a map and a compass also.