Saint Patricks day saw me and a friend attempt to walk the length of the Mourne Wall, 22 miles over 15 mountains. We tried to have a crack at this in one day.

The recent weather in Northern Ireland has been varied at best, in the last couple of months we’ve seen heavy snow, weeks of dry spells and more snow again. The mountains today still had a covering of snow which only receded around  the 350-400 meter mark, so most if not all of the higher mountains would have wintery conditions. This was something that we under estimated,  just how much could this snow  slow us down?

We set of from Carrick Little Car Park at 9am, this gave us around 9 hours of daylight before dusky periods affected vision. The temperature was surprisingly warm,  with no wind and a rough 4/5Celcius, I was quick to take off my jacket and just walk in a baselayer. 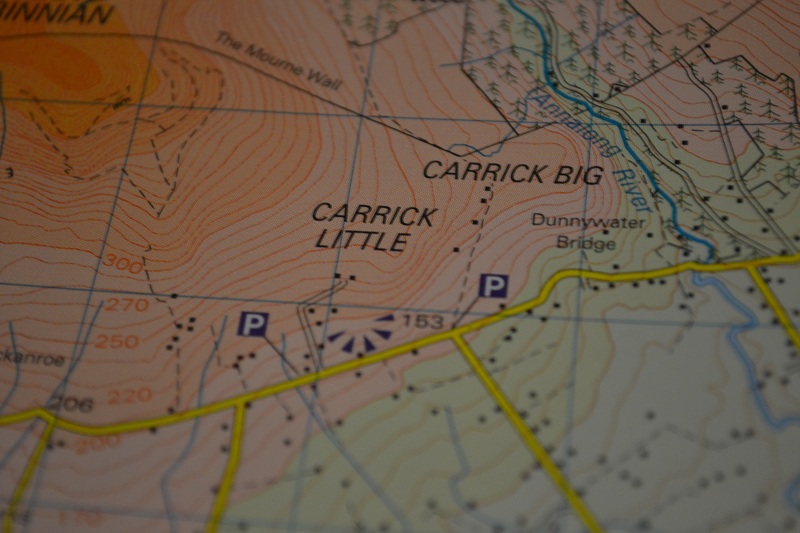 Binnian was the first  on our list and this was the most difficult by far. The slushy snow underfoot made for hard walking and lots of slipping. The snow was deep in places and made our journey time add up. Walking along the wall the ground underfoot was boggy in places, but the snow turned this into a hidden factor and wet feet were not long to follow. 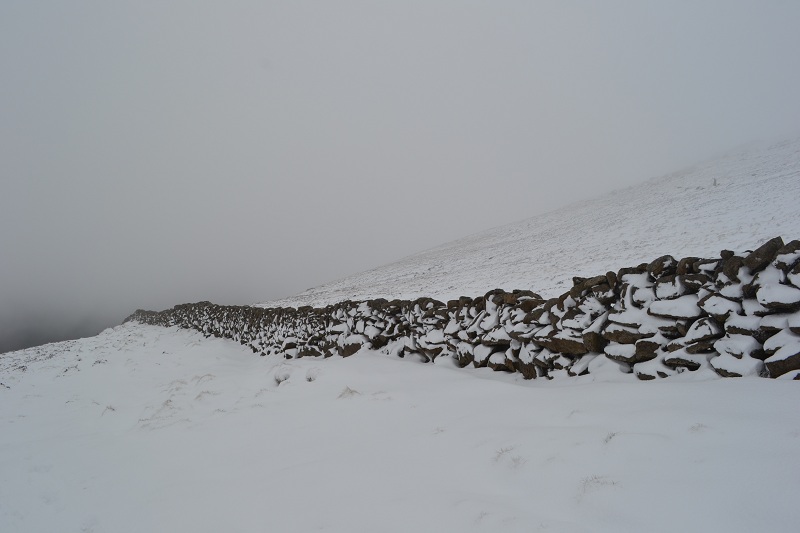 We crossed the stile halfway along the wall as walking looked easier on the other side. The snow here was waist high, it had been blown into the corner of the wall and turned into a massive pile. Thoughts of building a snow cave quickly jumped to mind, but not now, we had a walk to get done. 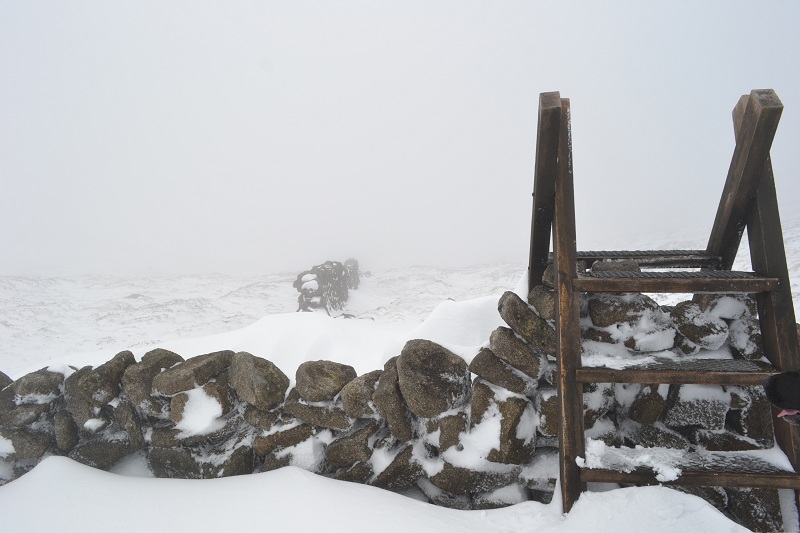 After a lot of slipping and slogging we eventually reached the summit and I was glad that the leg burning could at least be postponed for 5 minutes as we took in the view. Their wasn’t much of a view to be seen, the summit was covered in mist and we weren’t able to see further than 20 foot in front of us. The summit was cold and wouldn’t have looked alien in an alpine environment, but I was glad that I could now tick of a mountain that had been on my list recently. 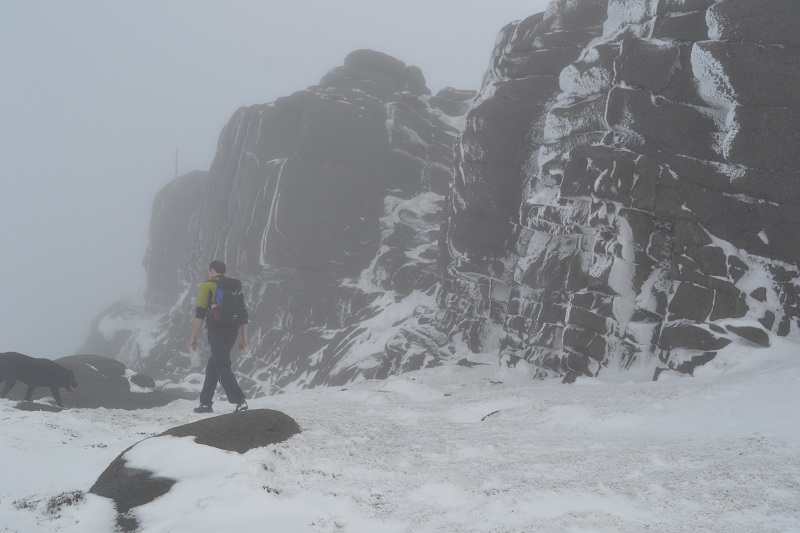 I must admit that as hostile as it looked, it was amazing to see the ice forming on all the different cracks and crevasses and the snow lying on different rock formation 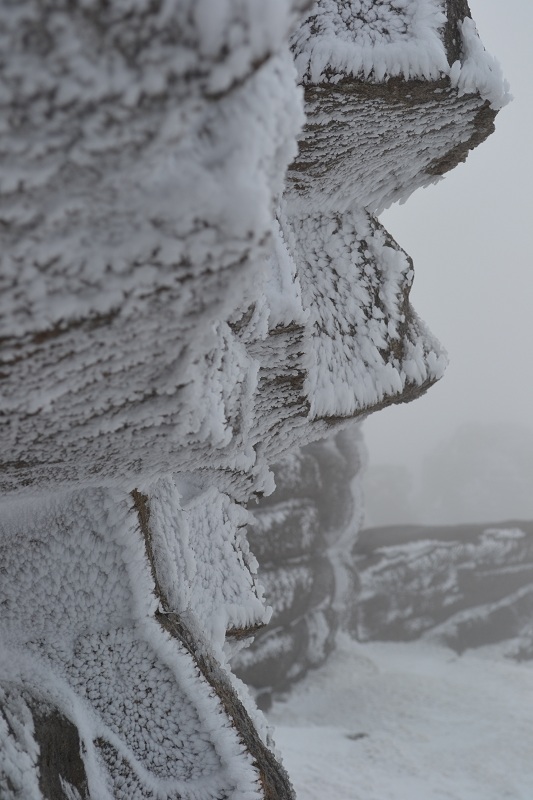 Now all we had to do was to descend, and this was going to be harder than expected. Binnian is incredibly steep, and the snow made this an even harder descent, I fell many times. My hands were soon cold from holding snowy rocks to help me descend. I could have put on gloves but I just wanted to get down and off the snow.

The snow covered many drops or small gullies that would usually be visible and in plain sight, but the snow made this difficult to judge. A lot of zig-zagging was needed to ensure we didn’t fall straight down the steep angle. 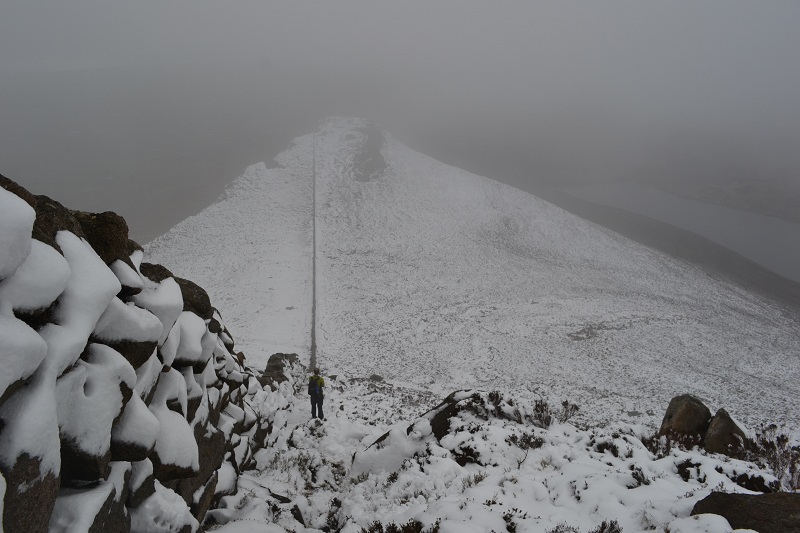 When we reached the bottom of Slieve Binnian and the base of Wee Binnian I took a look at my watch. 11:35. I had taken us a staggering two and a half hours to get over the first mountain on our route. I knew at this point it was going to be a tough challenge.

At this point the camera went back into the back and didn’t come out again, we had to make up for lost ground, so moving fast was the next step. We made a speedy ascent of Wee Binnain and down again towards Moolieve. The snow had cleared at the lower levels, which was good and bad, good because, well there was no snow, bad because this meant a slushy wet surface to try to move fast on.

I was instantly regretting wearing walking boots instead of a lighter trail shoe option. The cheap boots were heavy and didn’t have much grip on the slushy ground, only on the rock, which was few and far between.

At this stage my walking partner had started to pick up the pace with a light jog, something that was going to be needed if we were to make up for lost time. This was something I knew and tried to copy. Walking boots and jogging make for a serious muscle burn, and I soon couldn’t keep up. I tried my best to stick to a very brisk walk, but it was hard with leg fatigue from trying to run two minutes previous.

After running up and down Moolieve my heart was racing, it had brought on a sweat and I was very glad that I had brought a good amount of water. We then descended to Silent Valley and crossed with a brisk pace. The next step was to get up Slievenaglogh, but before this we had to cross a boggy section.

If you’ve never walked through boggy ground before the only way I could describe it is to imagine you are stepping into a deep grass/reed filled puddle with weights attached to you feet.

My legs were quickly tiring and before getting up Slievenaglogh I had to have a sit down to drink some water and eat some snacks. I was cramping as we took off up the mountain, but I pushed through it at a slower pace and kept going. My legs were burning as we reached the summit and the time seemed to be running faster than usual.

At this stage we both realised that time was not on our sides and if we were to continue the route we would very likely be walking in the dark. This would not have been a problem as it’s not abnormal to walk in the dark with head torches, but we felt it unsafe giving the wintery conditions and the fact the harder parts were still ahead of us. 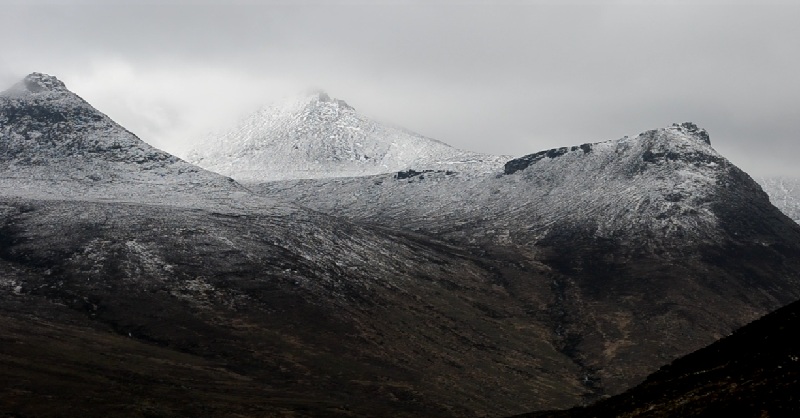 So we walked the 6 road miles back to the car park and called it a lesson learned. We have full intentions of getting this done, but we intend to wait for the days of longer light and of course, no snow!

What I would do different next time?

Have any thoughts or comments? Have you completed this route yourself? Let us know in the comments!