Home From sunshine to storm

From sunshine to storm

It had been a few weeks since I had last been in the hills, so I arranged a camp followed by a day hike with John.
We met in Downpatrick and headed straight for the Western Mournes after work.

While it was very warm, we were greeted by the same high humidity and fine misty rain we’ve been seeing a lot of lately. We walked up the Bann’s road and decided to pitch just shy of Slieve Loughshannagh, allowing for Spud and Catriona to have a quicker walk back to the car. 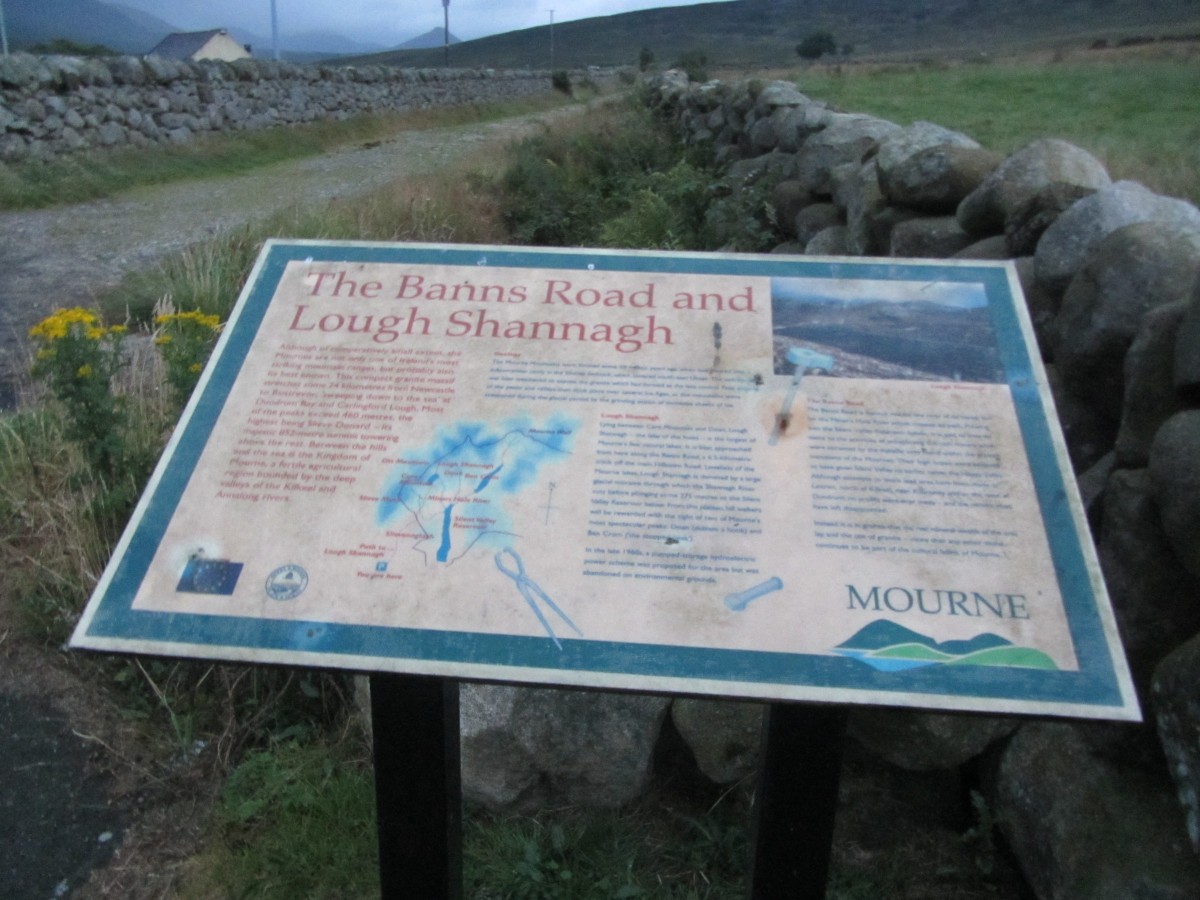 As usual my bivvy bag got thrown down on the first relatively flat area of grass I could find, John pitched his tent and out came the MSR for some tea and the omnifuel for our food. I had prepared some homemade burgers from steak mince earlier in the day and Spud took on his usual role of master outdoor chef as though there was no question who was going to do the cooking. Spud handles the Omnifuel like a pro and always gets the best out of whatever ingredients we bring. An extra meaty burger of around 1lb weight was set aside as reward for our hard working chef. 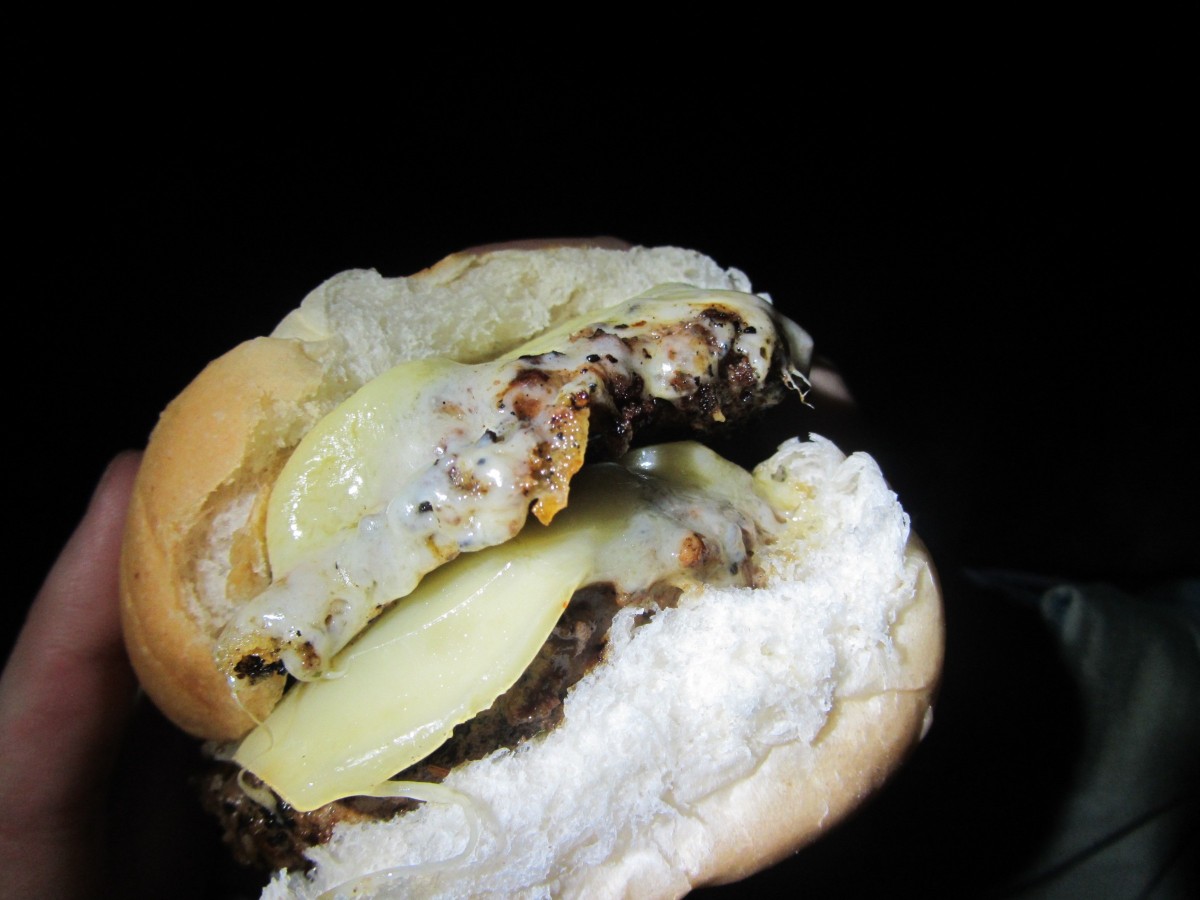 We sat around drinking tea and chatting while Spud’s iPhone provided some chilled out music. The sky was still grey but we were happy to be out and enjoying the Mournes.

Spud and Catriona headed back down the path shortly after midnight and shortly afterward the sky cleared in an instant. I climbed into my bivvy bag and lay staring up at the stars. The stars were as bright and as clear as I’ve seen on a summer camp and the bold, flowing silhouettes of the mountains around us were far more impressive than any of our cameras could do justice.

John relaxed in his tent and played the usual selection of Pink Floyd, Christy Moore etc while we chatted about how fine a night it was with the clear, star filled sky and beautiful silhouette of the hills. There was just enough of a breeze to keep the midge at bay, but it was still enough that we could easily chat from the warmth of our sleeping bags.

I lay and stared up at the stars until I fell asleep, pleased that for the first time in a long time I had a clear sky overhead as I lay down.

Morning came and I awoke to the sound of John firing up the MSR. John had packed up early in anticipation of the midge arriving, but I was still far too groggy to contemplate leaving the comfort of my bivvy. My morning of sloth literally came back to bite me however, as the gentle breeze died down and the midge were upon us within seconds. 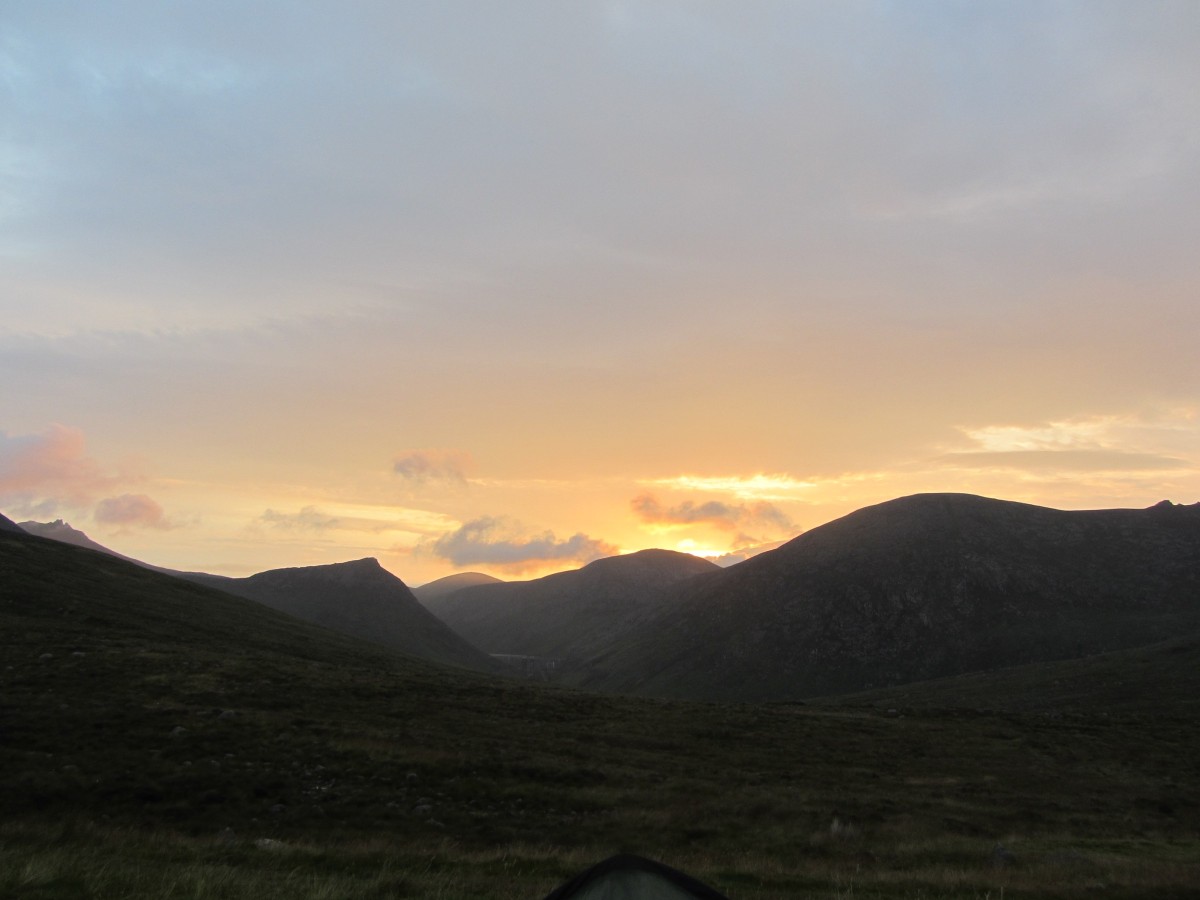 Not a bad morning view

Unfortunately the midge seemed to enjoy my blood a great deal more than John’s and I was feasted upon like a walking buffet while I packed up my things. The benefit of bringing an oversized 90L pack was very apparent as I simply opened the valve in my mat, let it deflate under my weight, then climbed out and stuffed the bivvy and its contents into my pack. We were on our way quickly, although my face and arms were already covered in little red marks from all the bites. The midge had their fill, or so I thought.

We made our way along the path towards Ben Crom reservoir, crossing some long grass and small sections of open ground along the way. With every step into the long grass a swarm of midge spiralled up from the grass, latching onto my neck, face and hands. The still, humid atmosphere did nothing to dispel them, making this undoubtedly the most unpleasant part of our hike.

When we reached the reservoir there was a slight breeze, which gave us some respite from the midge and we were greeted by the usual spectacular views. Regardless of the weather or how many times I’ve been there, I still can’t help but be impressed by the beauty of the surroundings.

The view from the reservoir was wonderfully serene

After we came up the steps we sat down by the parapet wall and had breakfast. The wind was quite high and we could relax and eat in peace, something the midge denied us earlier in the day.

A few tourists had passed by and John delighted in giving them the full “Tour guide” brief of how to get to Buzzard’s Roost and its connection with C.S Lewis. One of the tourists was an English Literature teacher who was absolutely fascinated by the fact that he could stand in the very spot C.S Lewis sat writing The Lion, the Witch and the Wardrobe.

We set off and climbed the Ben Crom path, making our way towards the Annalong Valley. I really enjoyed the climb up out of the reservoir, knowing that Annalong Valley wasn’t far away. Annalong Valley has always given me that elated feeling of being somewhere truly special. The rolling green ridgelines gently sweeping down into a lush green valley. The Annalong river snaking through the valley floor and the imposing majesty of Slieve Lamagan, the Devil’s Coach Road and the Castles of Commedagh all make this little area one of the most beautiful and richly featured parts of Ireland. I couldn’t wait to get there.

We reached the general vicinity of Annalong wood and Percy Bysshe caves were as stunning as ever. They’re particularly special in summer as they’re surrounded by a thick swathe of deep green fern. This area seemingly had its own still and humid microclimate, the hot, humid air stirred up the rich scent of the fern and for a second you could almost forget you were in the Mournes. It felt a little more like some sort of jungle – adorned with lush fern with a heavy, humid stillness hanging in the air. 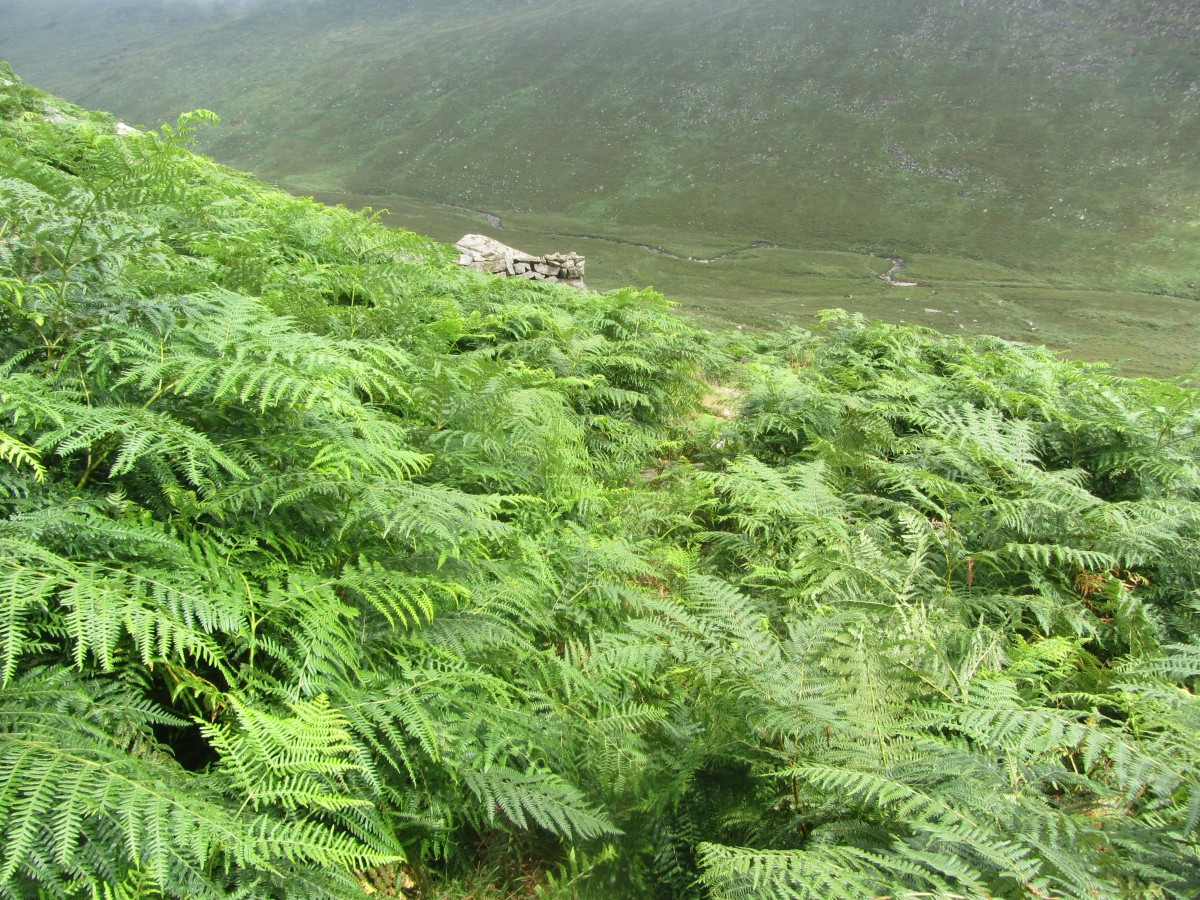 Approaching Slieve Lamagan we were reminded once again of its imposing stature and rocky character. The rugged, rocky look of Slieve Lamagan is rather unique in the Mournes and while it may look less intimidating from the distance of Annalong Wood or Carrick Little, when you’re up close it never fails to astonish. We still can’t believe it was actually used as target practice by the American navy during World War 2, those were different times.

As we moved on towards the valley we saw grey rainclouds blow in from the sea. We reached into our packs for our coats and walked on while the brief shower cooled us down a little.

The shower subsided and the coats were packed away again as we started our journey up the valley. This part of the hike is very well pathed and I couldn’t recommend it highly enough either as a day hike or a walk to camp.

We filled up from the river with the Water-To-Go bottle with every chance we got as the humid atmosphere was very draining. John was playing some very chilled out acoustic guitar on his iPod and I was enjoying every step up through the valley.

When we reached the path up onto the Brandy Pad the Castles of Commedagh towered over us cloaked by an enigmatic mist. On a clear day these wonderful rock formations are very pictoresque but surrounded by the humid mist they took on a very mysterious character which we stopped for a few minutes to appreciate. We enjoyed the leg pull of the walk up onto the Brandy Pad and I pushed on towards the saddle of Donard and Commedagh.

The “castles” of Commedagh cloaked in mist.

As I sat at the stile, amusing myself with my phone, I saw a flash and heard a rumbling clap of thunder. The rain came on hard and heavy and when John climbed over the stile he turned to me and said “I don’t want to stop, let’s keep moving”. We pressed on down the glen river path, with the bouncing rain and rumbles of thunder reminding us of just how varied and volatile mountain weather can be. Just as we reached the edge of Donard Wood the sky cleared and the sun beat down on us once again.

We had a pleasant stroll down through the wood into Newcastle, enjoying the post-storm freshness in the air and the heat of the sun beaming down on our midge-bitten necks.

We had a great evening of camping and a varied hike with everything from sunshine to thunderstorms – as authentic an Irish mountain experience as you could ever ask for.