A robust, high performance, breathable bivvy. Premium price and quite heavy – perfect for extended use. 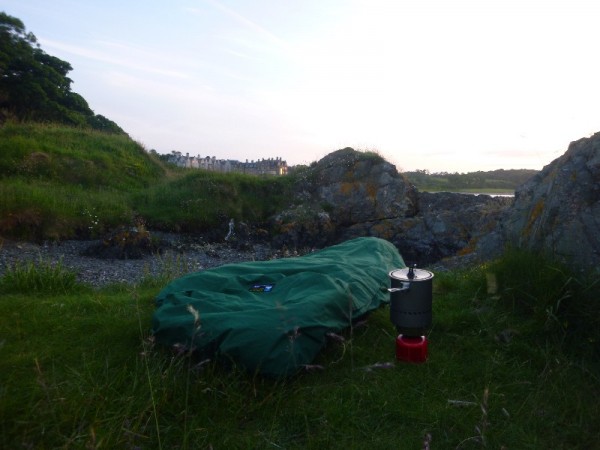 Terra Nova Titan set up for the night. Stove nearby

After a few less than satisfactory, clammy nights in my previous bivvy bag, I was in the market for something more waterproof, breathable and functional as an all-out tent replacement. I needed something which I could seal myself into when the weather got grim, which had sufficient breathability to let out sweat vapour and carbon dioxide, but also keep out rainwater in the heaviest of downpours. In essence I needed a tent replacement – rather than an occasional tent alternative. After some research, I decided on the Terra Nova Titan.

Being quite substantial and made of three layer GoreTex, the Titan is a sturdy heavyweight, as the name might suggest. 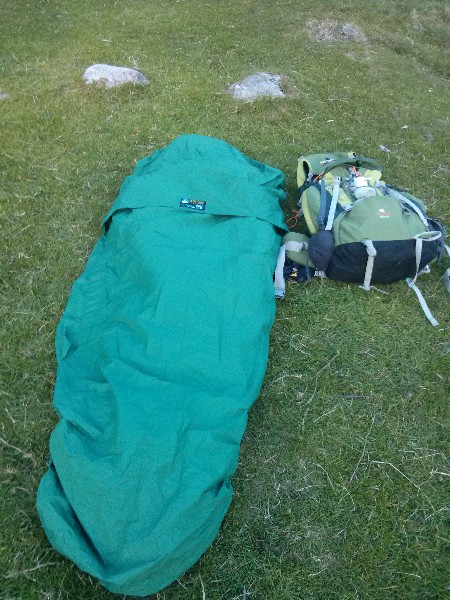 Next to 70L Vango Sherpa pack

Pictured next to my 70L pack above, the ample size and sturdy construction of the Titan is evident. The hood section is oversized – roughly around the length of my camping pack. This is an important consideration, as it adds to the sense of space within the bag. The extra space in the hood section is a significant plus. On several inclement mornings I have woke, compressed my sleeping bag and put on my trousers and jacket – all without unzipping the bivvy bag.

For anyone who uses a down sleeping bag this is something which is relieving to know. Sleep with your compression sack in the bivvy and you’ll never get a wet sleeping bag. For those of you who prefer to sleep with your head out of the bivvy on a clear night – do be advised that the section of the bivvy below the hood in some cases will only barely come up to the top of your sleeping bag. If you are not careful, a few inches of the sleeping bag can be exposed – although it is trivial to pull the hood over your head and zip it shut. Do bear this in mind. 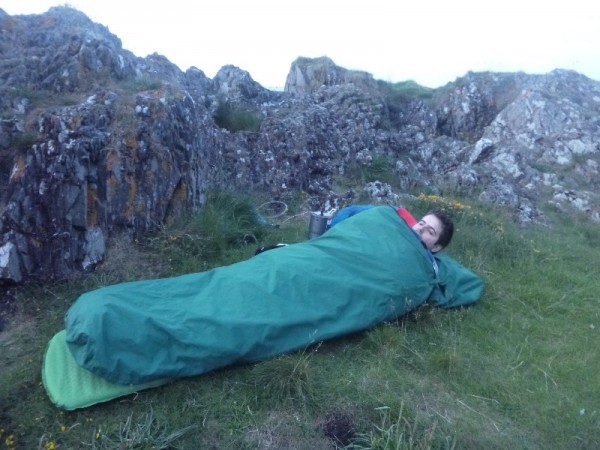 Note the sliver of sleeping bag exposed above the lower section

The heavy duty build quality of the Titan is  evident in the smaller details also. See the zip for the hood section below. Note the sturdy YKK zip with a good robust cord puller. The last thing you want when a downpour comes along is to struggle with a snagged zip. I have never had this problem to date, although it is good practice to push the fabric up from your face to achieve tautness when zipping.

All zips have both external and internal zip pullers, to close from inside – or zip things shut while you have your fun around the fire. 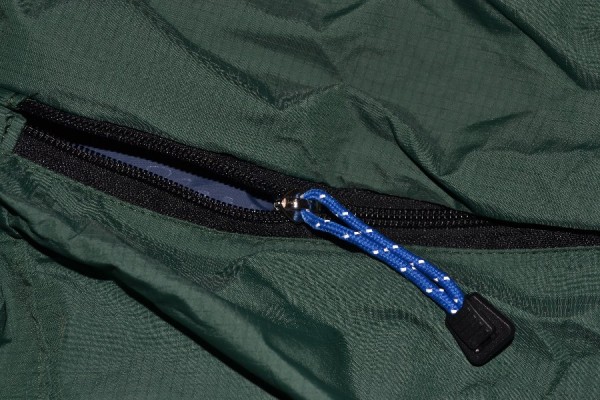 The side of the bag can also be unzipped (same heavy duty zip) and the baffle is held shut with a sturdy strip of velcro. This allows easy access for big wall climbers. Although I have never used the Titan in such a manner, it is also possible to sleep wearing a harness, with your rope leaving through the side of the bivvy. 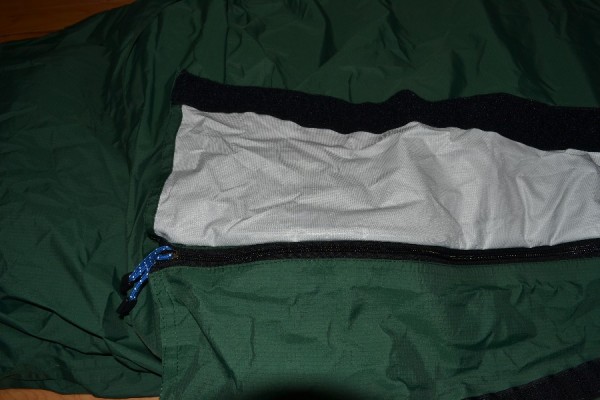 While I have often stored my rucksack inside the bivvy as ballast – or ontop in some cases (temporarily compromises sleeping bag loft) – truth is I would be a lot more relaxed on a windy evening if I knew that my bed for the night was well pegged down and not fluttering off into the distance. Perhaps a consideration for a future version of the bag?

The Titan bivvy has been my sole form of camping shelter for most of 2013. I have slept in it for at least twenty nights and it has performed flawlessly, even in horrendous conditions. As regards performance, this is not a compromise when replacing a tent.

My previous bivvy bag was an Alpkit Hunka XL. Alpkit are an honest bunch and they make no bones about the fact that the Hunka is not the most breathable bag on the market. They aren’t kidding. A clammy sleeping bag shell and a moist inner surface of my bivvy bag was something I experienced regularly. This was something I had grown to associate inexorably with the use of a bivvy bag.

I was pleasantly surprised when I began using the Titan. The Titan bivvy uses FLO-2 Goretex which is Terra Nova’s trademark name for Starlite Goretex. More breathable than regular Goretex, FLO2 lets more of your sweat through, but importantly:

It is also safe to completely zip the bag shut 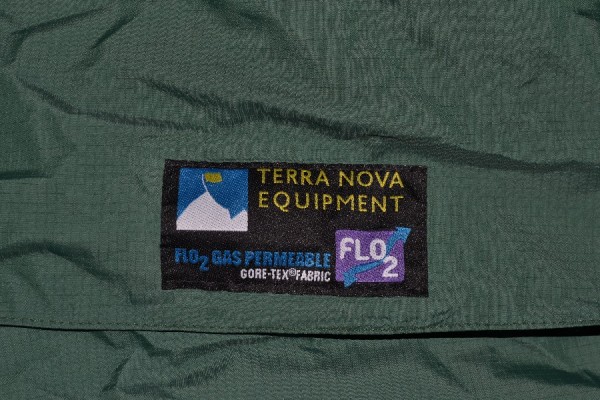 FLO-2 Goretex – lets carbon dioxide out and oxygen in

This is not such a big consideration for the occasional bivvy user – but is of paramount concern for someone who wants a bivvy as a full-time tent replacement. Zipping the bag shut entirely gives the assurance that the elements will be kept out fully and you and your gear will remain dry. Also with the bag zipped shut a much warmer microclimate is established within the bag. In my experience wind does not penetrate the bag, avoiding the cold face sensation many associate with using a bivvy bag.

Here’s a shot of the hood zipped shut after a rather wet and windy camp at the summit of Slieve Muck in the Mourne mountains: 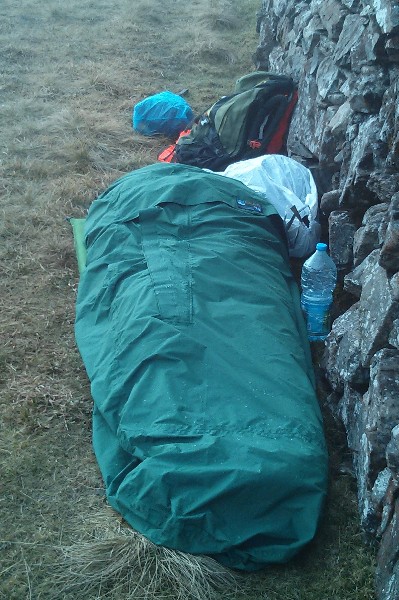 While the above photo has quite a low resolution the beading of the previous night’s rain is evident on the surface of the bag. With the help of the high winds any perspiration and CO2 from exhalation passed through the bag very well. The bag never felt stuffy and no clammyness was to be found in the morning.

I have also used the bag at lower altitudes, sometimes (to my regret) with a much warmer sleeping bag than needed. Even with the higher rate of perspiration which comes from the use of an excessively warm bag – the vapour transmission rate of the FLO2 goretex ensured a comfortable night’s sleep.

This bag breathes well, can be zipped shut safely and beads well during a downpour.

The promotional material for this bag mentions how it is possible to sleep with your rucksack in the hood section. From using the bag I would note that this would only be possible with quite a small bag (32L at the largest). I would recommend against doing this as it negates the comfortable advantage of the larger hood – and the ability to compress your sleeping bag and dress while in the bivvy during a downpour. Just put your rucksack in a large, sturdy refuse or rubble sack and keep it outside the bivvy.

At just under 800g this is not a light bivvy bag. For ultra-lighters this may be a deal breaker, although it is still over 100g lighter than the Terra Nova Laser Comp 1 – a very lightweight tent which does not have the robustness of the Titan Bivvy in its favour. This is a robust bivvy built to be a bombproof tent replacement.

Aftercare is very important. To keep the breathability and gas exchange optimum the bivvy should be stored dry and washed regularly with a gentle cleaner such as liquid soap flakes or Nikwax Tech Wash. I have yet to reproof the DWR on this bag despite almost a year of extensive use. The beading is still optimal.

People will tell you that £320 is excessive for a bivvy bag. This “make do with a fertilizer bag” type old fashioned thinking has its place – when a bivvy bag is used infrequently and where getting soaked, either in sweat or in rainwater is the accepted norm. This bivvy is an entirely different animal – and as a regularly used tent replacement which guarantees dryness regardless of the conditions – it is in my personal opinion worth the outlay.

A robust tent-replacement bivvy bag with high breathability. Can be zipped completely shut in inclement weather and has ample space to pack up your sleeping bag while inside. Expensive, but worth it for heavy use.

I’ve since used the Titan for 1/2 camping trips per month for an additional two years since writing this review. It still comes with my highest recommendation. It’s breathable, dry, packs down well and weighs less than even a lightweight tent. Combined with the xtherm mattress (reviewed here) and a good down sleeping bag, it’s a warm, lightweight and packable sleep system which is hard to beat. This is why it’s still the first thing I reach for in all except the laziest of car-camps.

Terra Nova have stopped producing the Titan. There’s been no word from them yet about plans for a replacement product in their lineup. Second hand bags (sometimes barely used) continue to be available on eBay occasionally, some people try out bivvying and decide it’s just not for them.

Photo Album: Camping at Annalong WoodTwo nights of the Mournes at Commedagh and Tollymore