Home Two nights of the Mournes at Commedagh and Tollymore

Two nights of the Mournes at Commedagh and Tollymore

As it had been a couple of weeks since I had last been out for a camp, I decided a one nighter probably wasn’t going to do the trick. Already due to meet some of the others from HikersBlog on Saturday evening, I decided a camp on Friday night was also due.

I packed the new Xenith 88 with a lot more gear than was needed, partly to test the new pack under load and partly to begin acclimating to a heavier pack in preparation for winter hikes.

Unfortunately I left my packing until quite late and rising at 6:45 for work the next morning I didn’t get a whole lot of shut-eye. I brought the pack to work with me the next morning and it sat in my manager’s office out of the way until such times as my day had finished. 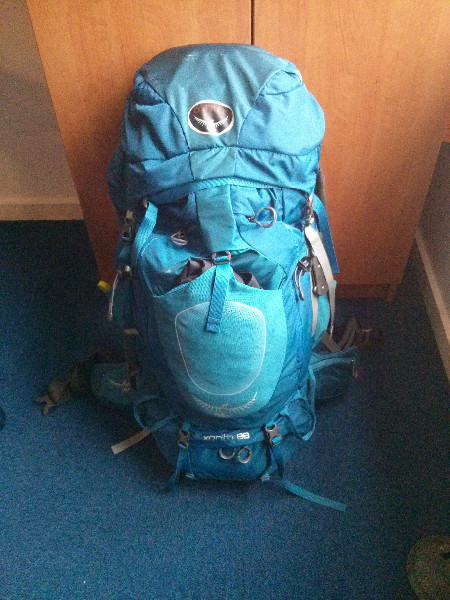 When it was time to leave, I took my water bladder and filled it at the office water cooler – only having to remove the bladder from its dedicated area at the back of the pack. This is one of the biggest bonuses about the Xenith – you don’t have to unpack and repack all your kit to get at the water bladder – a nice little touch.

I got the next available bus to Newcastle and made for the mountain with haste, having not eaten since breakfast. This was probably quite poor planning, but I let the excitement of getting into the hills get the better of me – and never really noticed I was hungry.

The pack was quite heavy so I set a slow and cautious pace, taking me just under two hours to reach the summit of Commedagh from Donard Park. The time could be improved upon, but with a +20kilo pack, I’d want to have someone with me if I were to push on out of my comfort zone.

Here’s a nice, if a little grainy shot of Newcastle after the sun set on Donard, by this point I was most of the way up to the saddle, the view was breathtaking even if my phone’s camera doesn’t quite do it justice: 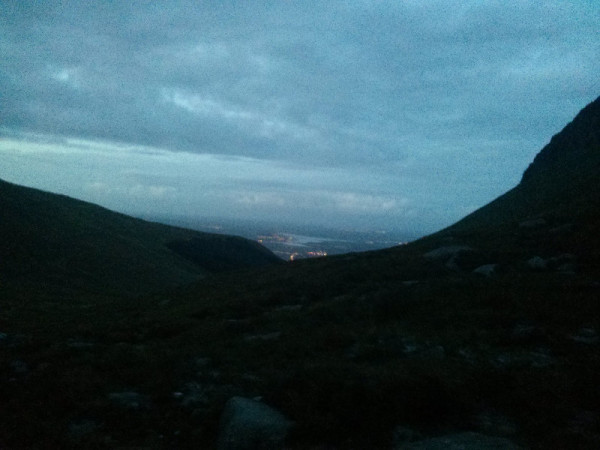 Newcastle at night from Donard

Once I reached the summit I wasn’t yet showing any signs of fatigue or exhaustion, so very foolishly didn’t eat immediately. I waited on fellow camper Fred to join me. Once he arrived we sat and talked for a while, set up then had a bite to eat.

The mist descended down over Commedagh, which apparently was the only mountain in the mournes not to have a clear view that night. Just my kind of odds. The moon looked fantastic, however it was one of those views which just can’t be properly captured on a cameraphone, needing a proper SLR and a bit of attention to get right.

It was properly cold ontop of Commedagh, so the Filo jacket came in quite handy for the evening. I would have definitely been in for a rough night had I came unprepared in terms of insulation, as I just wasn’t feeling 100%. Nonetheless once I had climbed into the bivvy and wrapped up in my down sleeping bag, all was well and I drifted off to sleep.

The mist was still with us in the morning and Fred had places to be so he packed up and headed off. Here’s the shot he got of me in the morning about to leave the bivvy: 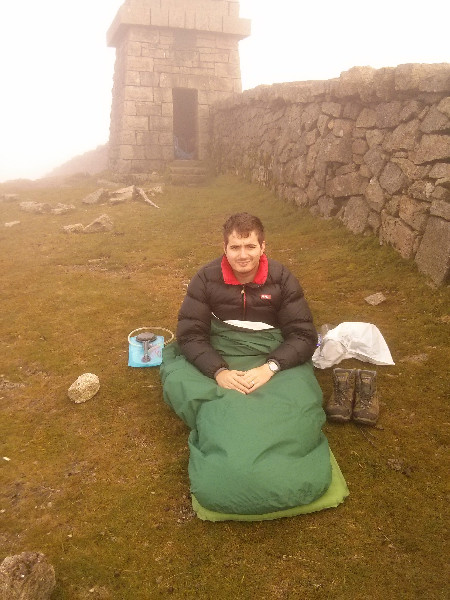 It has to be said that I wasn’t feeling nearly as grumpy as I look in that photo – while the mist did take away from the view somewhat, it was quite a pleasant morning with no excessive wind.

I rose, packed up and cooked some breakfast while I awaited the arrival of the infamous LandyLiam who had let me know by text that he was joining me. I made up for lost time, tucking into the food I should have had the previous night – and had a little to spare for Liam also. 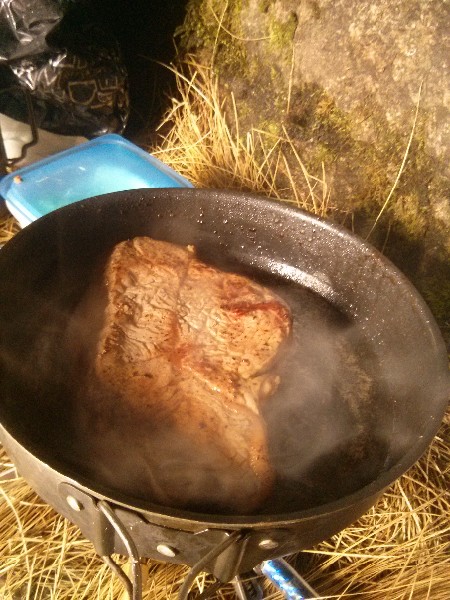 After Liam arrived we strolled down to the water pipe so I could fill up my bladder pack. By this time the participants in a charity walk began to make their way past. Check out this colourful character with his interesting headgear: 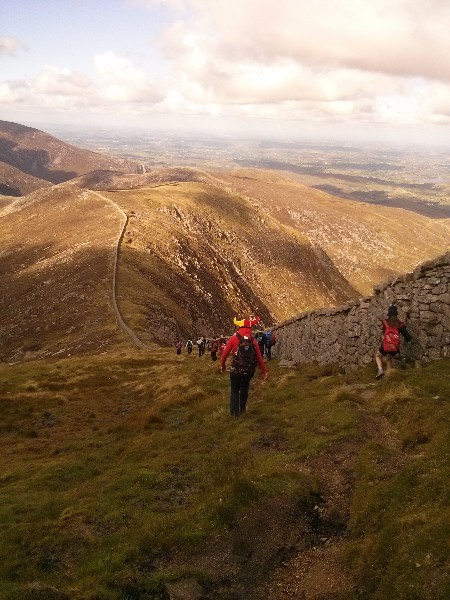 We then climbed back up to the stile and headed towards the summit Cairn. Check out this view of Donard: 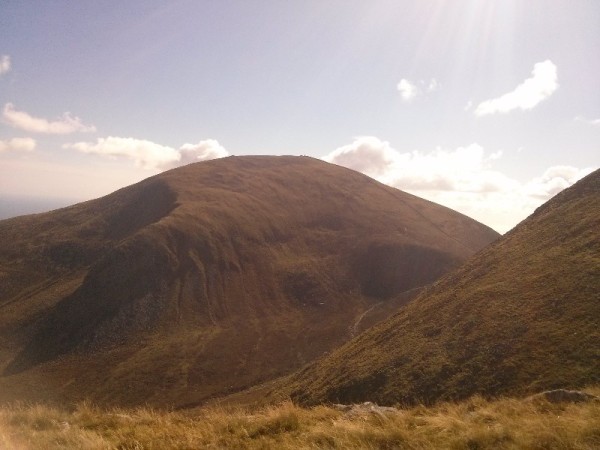 We then headed down over Shan Slieve and down into Newcastle, where I picked up a baselayer (as I had forgotten to bring one and my cotton t shirt had got soaked) and a can of gas for night two. I met up with Eamonn and we started the walk from Tollymore outdoors centre around towards the Spinkwee / Cascade river.

We met the others part way there, among the most abundant ferns I have ever seen in the mountains: 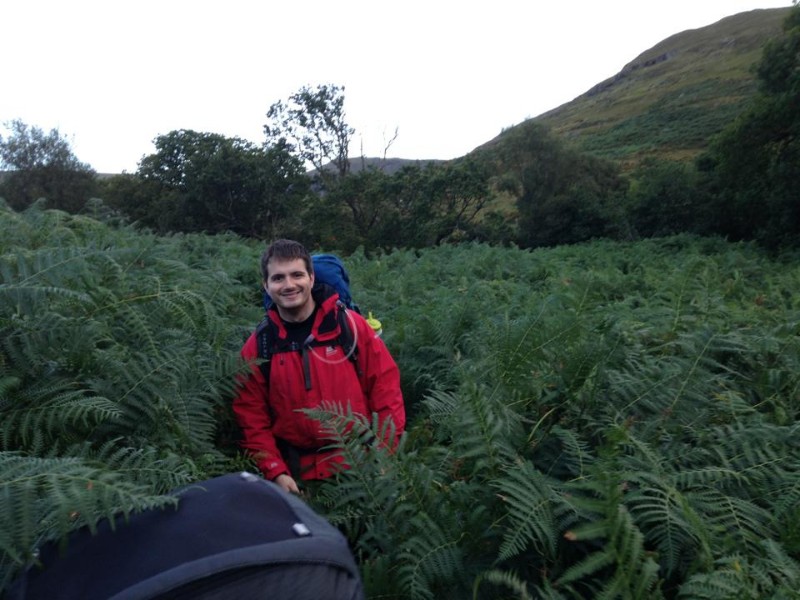 After taking note of the high winds and mindful of the higher winds forecast, we opted to return into the edge of Tollymore forest where it was more sheltered and set up camp for the evening. We set up our gear and out came the MSR Reactor, known by the guys as “The kettle”. We had a few cups of tea and gathered wood for the fire. 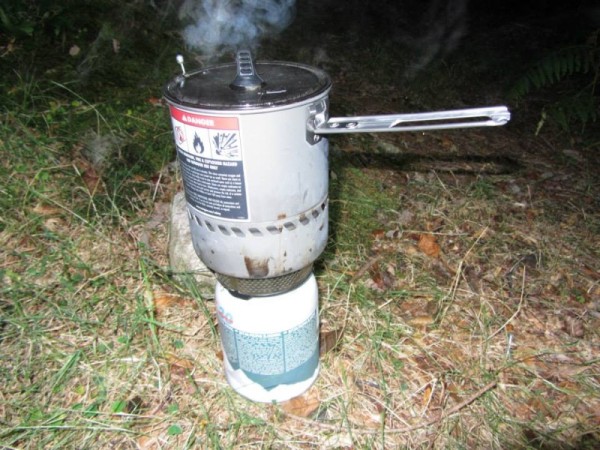 “The kettle” starting to boil

Once the firewood had been gathered we got a fire going and I fried up some halloumi cheese which went down pretty well. Full of fat and salt, it’s pretty good food for camping if you don’t mind weight. For a second night lowland camp it wasn’t really much of a problem. 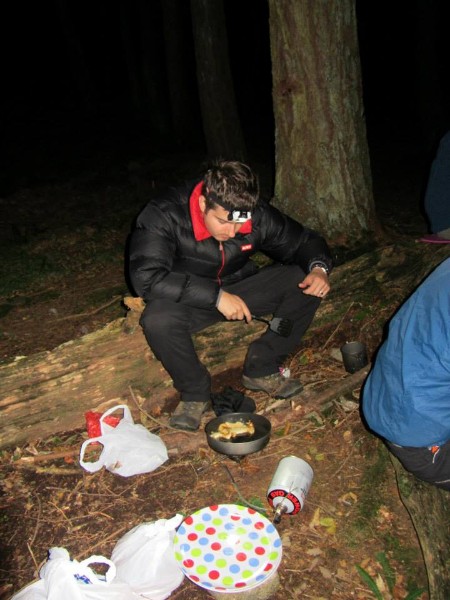 Frying up some halloumi – tasty

Everyone had a quick bite and then out came some tasty traybakes my lovely wife had sent along. Needless to say not a single one survived. 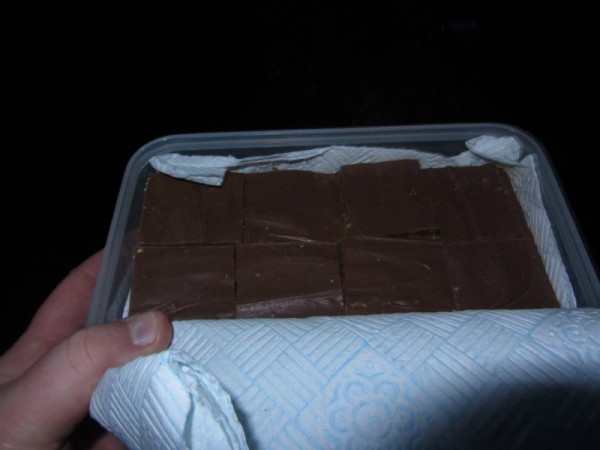 We had a few drinks and a great evening’s craic, with the wind rustling the leaves of the trees overhead, reminding us that our choice to return to lower, less exposed ground was sensible. I’m glad I got the summit camping out of the way the previous night as conditions on the mountaintops must have been horrendous. 90kph winds had been forecasted and it wouldn’t surprise me if the forecast had been exceeded.

The fire gave us plenty of warmth and a chance to relax despite the wind. Oisin seemed to be enjoying himself: 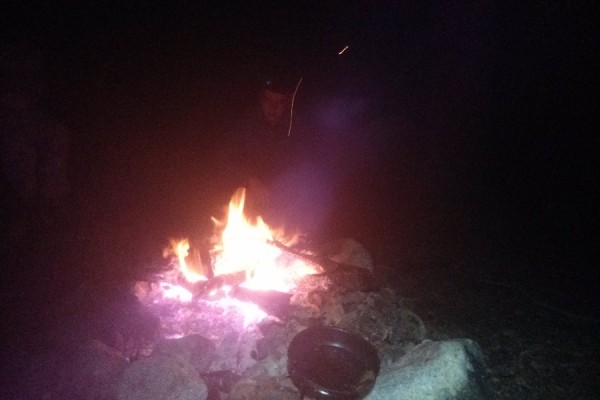 Oisin by the fire

Thanks to Spud’s mastery of the omnifuel and steak frying in general, everyone was well fed with great food and relaxing nicely. I was acutely aware of the contrast with the previous night where nutrition had been somewhat neglected, I felt warm and relaxed – generally much better than the night before.

We hit the hay for the night and everyone slept pretty well. I awoke to find out John had been getting some snaps of my bivvy bag while I was sleeping, something I obviously have been unable to ever do myself: 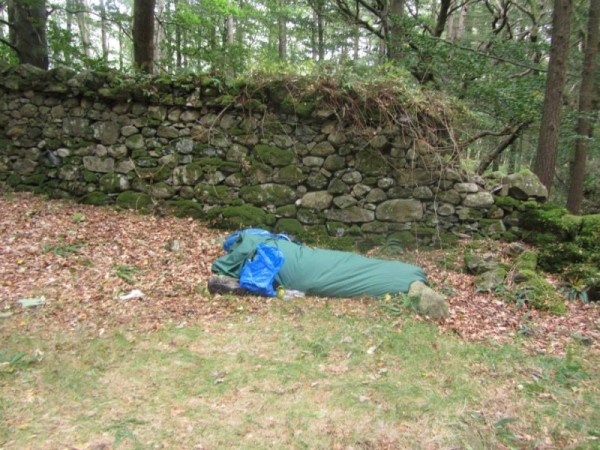 Getting an extra bit of kip in

We packed up quite early and made our way down the path for about 9:30. Tollymore was pleasant but even there along the trail you could see the occasional fallen tree as evidence of the ferocity of the night before. Once again staying off the summits felt wise. 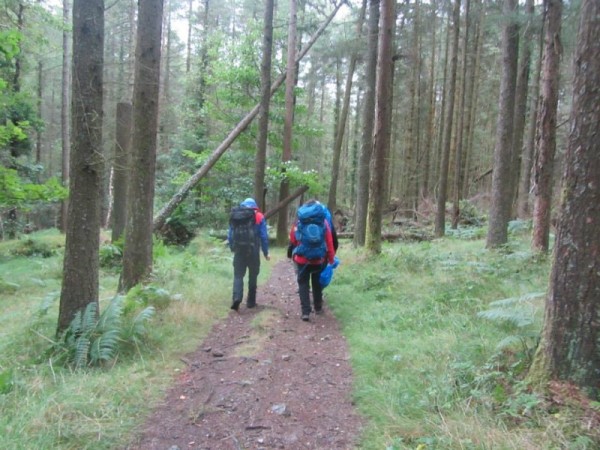 Heading back down the track.

All in all it was a great two nights in the Mournes and even though I midjudged things and felt a little worse for the wear on Friday night – it certainly didn’t spoil the whole experience or deter me. Lesson learned however, from now on I will definitely be eating immediately upon stopping after any summit with a heavy pack.

The other lesson we all learned from our experience this weekend was that weather forecasts shouldn’t scare you out of getting outdoors. No matter what the weather you can still get out, even if you have to change plans or routes in accordance with the conditions. We had an excellent night and no rain in the morning despite the horrendous conditions forecast. We may have changed our plans slightly due to the high winds, but it was still a great night – infact it was better for it. 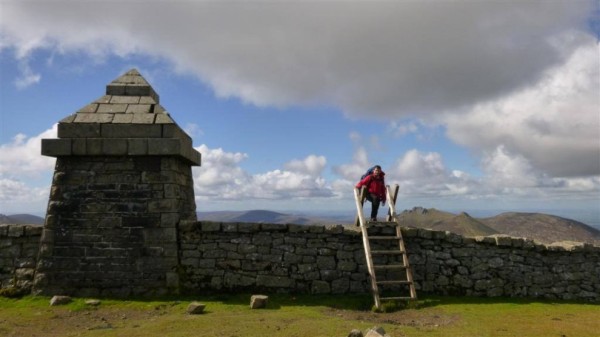 Get on out there and enjoy yourself!