The sun broke out from behind the clouds and shone brightly on the road I was walking. It was getting warm, and I was starting to sweat. The wind blowing a strong breeze, but it wasn’t giving me much relief…

I had left from my starting point a few hours earlier. I was nearly at the main attraction of the walk: The Sallagh Braes, a basalt amphitheater carved by ice during the last ice age, which cliffs can reach 100ft tall at some points. 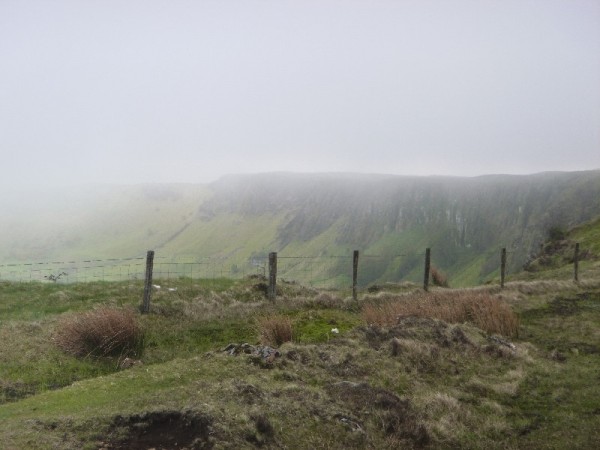 The first section of the walk stretches along the coastal path from Larne to Drains bay, where you are taken through the woodland of Carnfunnock and finally along the country roads which lead to the access stile for the Sallagh Braes. From here you cross the Braes and follow the main road back towards civilization and back to your starting point. 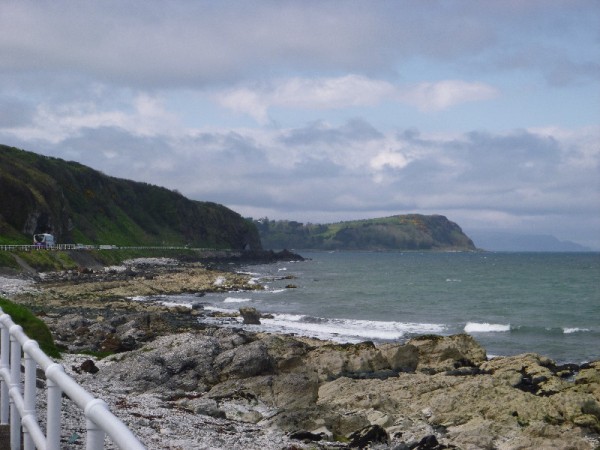 The weather was surprisingly mild for a days walk in early May. The sun broke through the clouds and the strong breeze kept me cool as I walked towards the hills that were calling me.

The coastal start was a nice change from the usual gravel path and marsh that can often be found at the start of mountain walks. The sea air and sound of crashing waves sounded melodic, and provided a different soundtrack than that of everyday life. As I walked along the coastal path I spotted a variety of birds, feeding and flying along beside me as I walked. If you are lucky, like I was, on a clear day you can see along the coast to the start of the Glens of Antrim and even to our Celtic cousins across the sea, to the coast of Scotland.

After this coastal treat you will soon end up at the Drains Bay, where I followed the path that leads into the woodland of Carnfunnock and eventually Ballygalley.  The deciduous woodland surrounds the path and casts a certain atmosphere that could trick you into thinking you have been dropped back in time. These trees cast a cooling shade from the warm sun that was now beating down and drawing a sweat. I strolled along briskly, relishing the fresh air that filled my lungs. 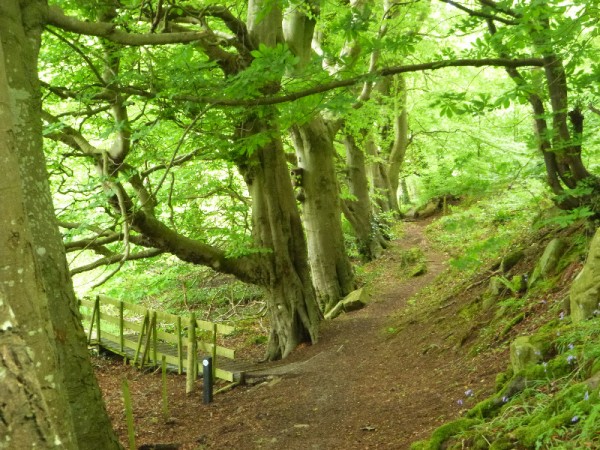 I was even treated to the sight and smell of the iconic flower native to our ancient woodlands, none other than that which is the bluebell. A flower that is not as common as they used to be, but can still be found in April through to May in selected areas. Remember you are not allowed to pick them, this is so everyone can enjoy the flower. 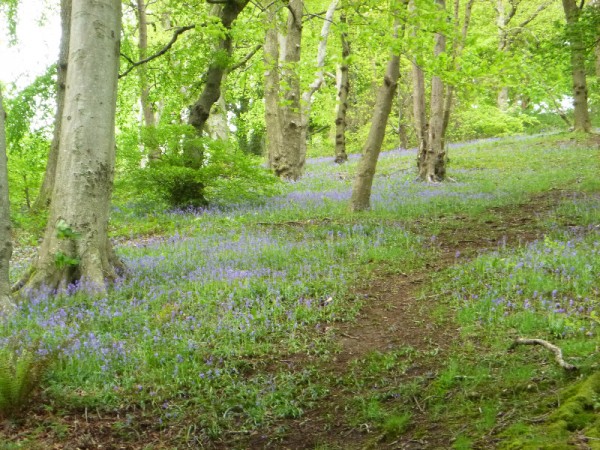 My legs continued walking and I soon ended up in Ballygalley, and soon after that, outside Ballygalley, strolling along the country roads that lead to my main attraction. Hedges grew taller and taller as I walked country-bound. I soon had to jump to get a peek over them, and eventually accepted the fact that Mother Nature had me beat on this one. 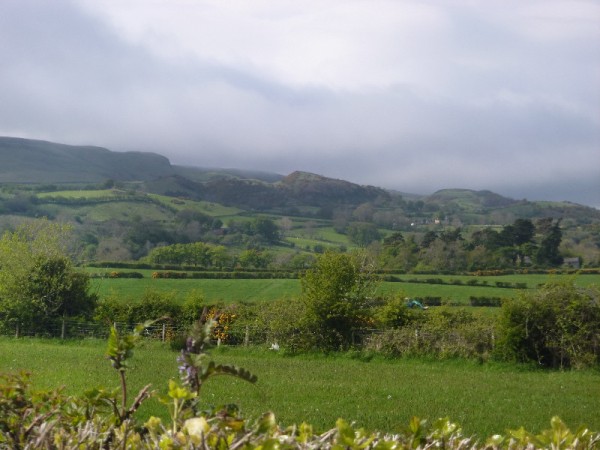 Walking along the small country roads I passed little traffic and encountered 10 times as many sheep as I did humans, which wasn’t an awful lot. The clouds started to gather and as I walked further towards the open plateau of the Antrim Hills, and with this the wind got stronger. The wind was both a welcoming and a cursed element, the wind was cold, so I wore more layers, which in turn made me warmer, so I found myself sweating more. I struggled to find a nice medium. 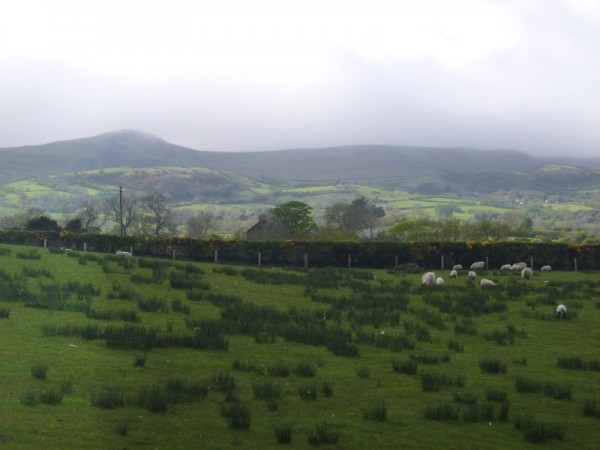 I was more than pleased when I finally found the stile at the carpark on the Feystown Road. This was where the tarmac disappeared and the marsh ground of the Sallagh Braes opened up. No more hedges to impair my vision of the ladscape, just vast views from here on in, or so I thought.. 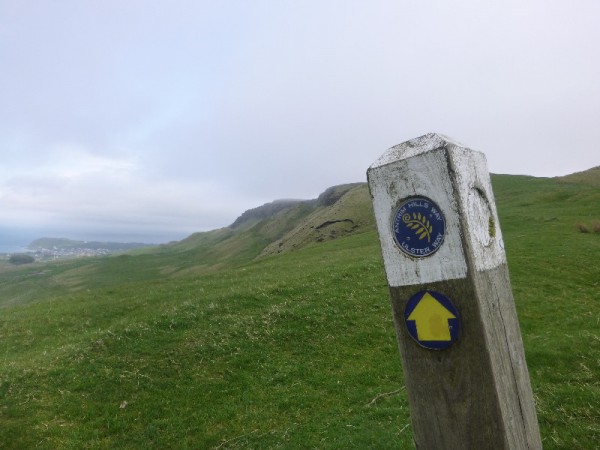 The views of Knock Du were quite impressive and resembled what I would imagine a mountain may look like after many years of erosion and weathering. I walked along softly rounded bumps and ridges and was soon met by a familiar friend that is the mist.

The views soon disappeared and I was left with no option other than to admire the marsh I was walking along. I could at least be grateful for the fact I hadn’t stepped in sheep dung yet, no, wait, I take that back, the mine field of sheep dung soon began.

I walked in the mist for what seemed like an age until I found a wire fence and the start of the basalt cliffs known as Sallagh Braes. The mist was still lingering, but not quite as heavily as it had been before, so I could at least see some of the cliffs I was walking on top of.

The odd time the mist would clear and I would be treated to the beauty of the cliffs and sheer drops that form the amazing scenery I was walking through. I must admit, they seemed much higher when you are on top staring down into the mist that hides the bottom. The fence provides a sense of security against the drop off.

The atmosphere was somewhat eerie and silent, but yet peaceful and relaxing at the same time. The landscape seemed to stand still, and other than the occasional sheep and gust of wind, nothing moved. I found it calming walking with no one else, or no other sounds.

The mist eventually cleared and I could now see a bit more of the marsh and wet ground that I was dancing around. Dry feet never stay dry for long, I was both glad and grateful I had kept them dry for so long, but nothing last forever. I was soon trudging along with a squelch in my step and the wind at my back. I eventually made it to the end of the Sallagh Braes and was treated to a lovely view of the section I had just completed. 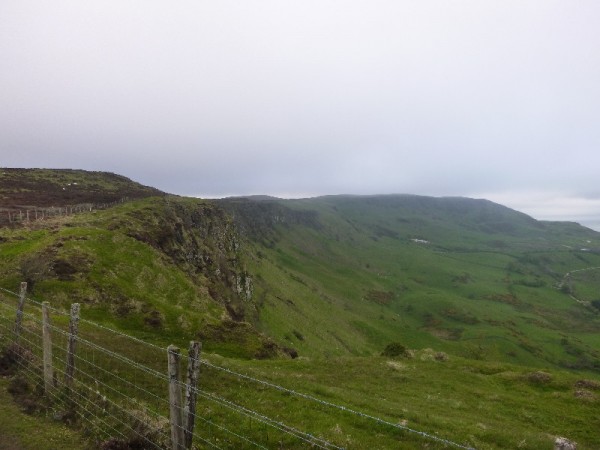 Back on the road and homeward bound I felt relaxed and at peace. I happily tramped along the country roads and back towards civilization. I soon forgot about the wet socks and instead focused on how much better food tasted when you were outside with tired legs. I made it back in good time with sheep dung on my shoes and a smile on my face, a definite worthwhile way of spending your day. 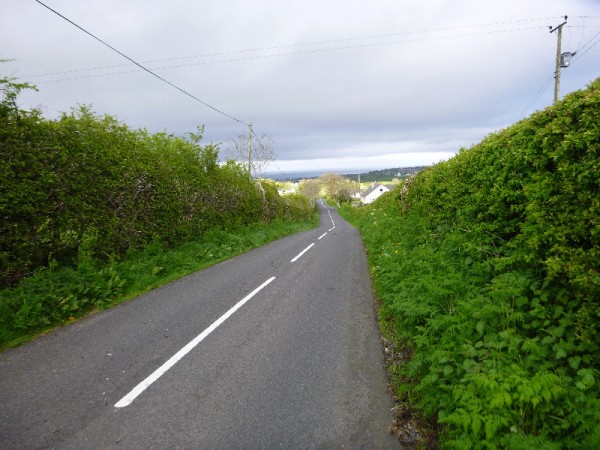 In total the route totaled up to 17 miles and took around 5.5 hours. Nothing too strenuous, but not a walk in the park either. Enough to give you that addictive burn in the legs, but not so much that you can’t walk straight for the next few days.

Maybe you should try it too? Nothing is stopping you.

Do something that scares youMontane Medusa 32L Rucksack - Gear Review