It had been a few weeks since I had been out for a good stroll, so I decided short notice that I should bivvy on a Mourne summit after work yesterday.
I made sure I was in work early in order that I might beat the rush hour droves down to the Mournes after finishing.
I kept busy all day as my pack lurked under my desk – knowing I’d be on the hill soon enough. 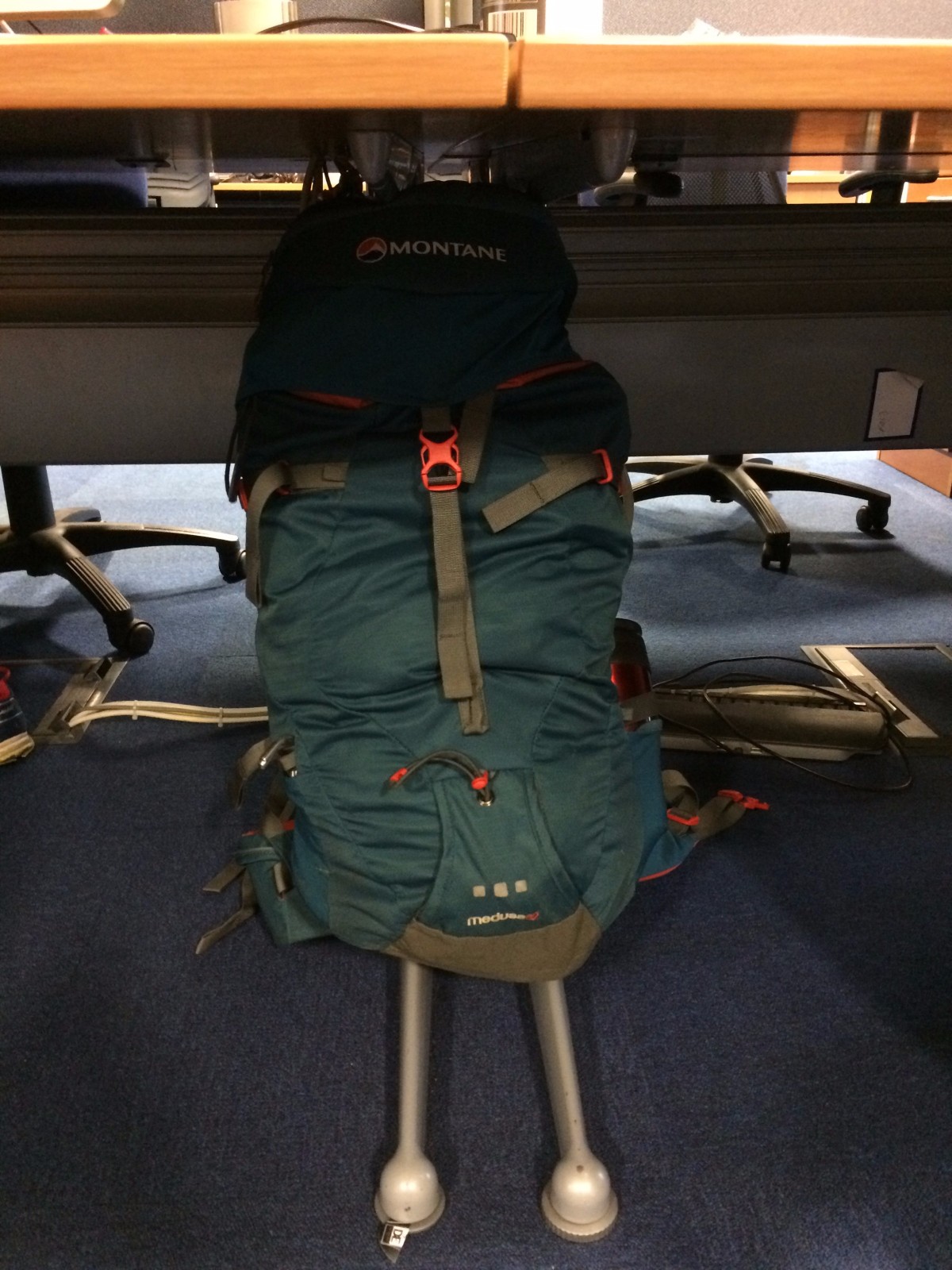 I met John as he finished work and we set off up the Trassey Track. After the last two days of miserable, torrential rain, it was fantastic to see clear, bright blue skies and that wonderful syrupy orange glow bathing the mountains.

We already knew the evening was going to turn out great as we strolled up the trassey track, as the dappled light of the fading sun streamed through the hedgerows on either side of the trail. 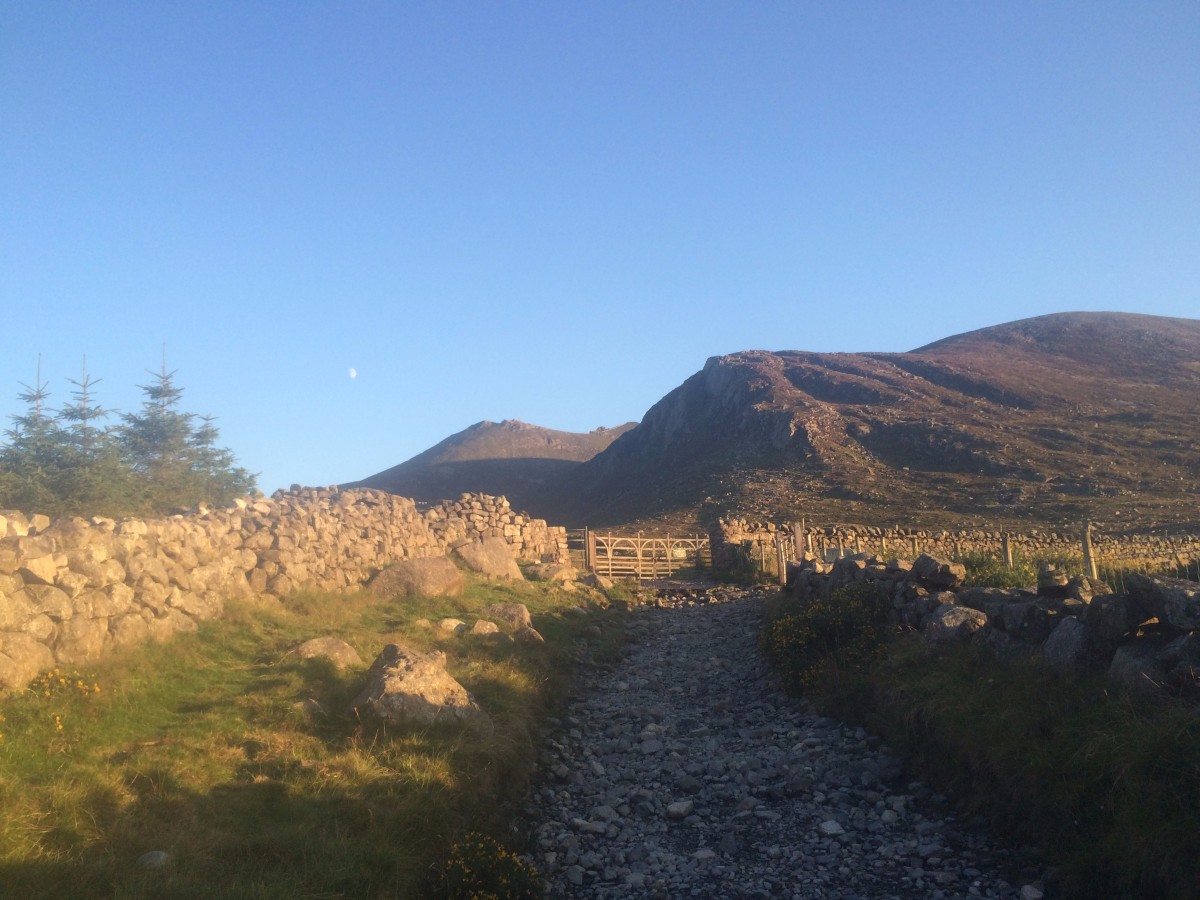 The walk ahead looked very inviting

I had packed exceptionally light (8kg), fitting everything I needed into a 32 litre pack, the Montane Medusa (click for review). When you’re leaving from and coming back to work a large camping pack can be a little ungainly and lighter means faster in the hills.

The sun began to set as we made our way up the track in the direction of hare’s gap and we couldn’t help but make the occasional stop for photos. We’ve been up the Trassey track many times before, but rarely in such fantastic weather. 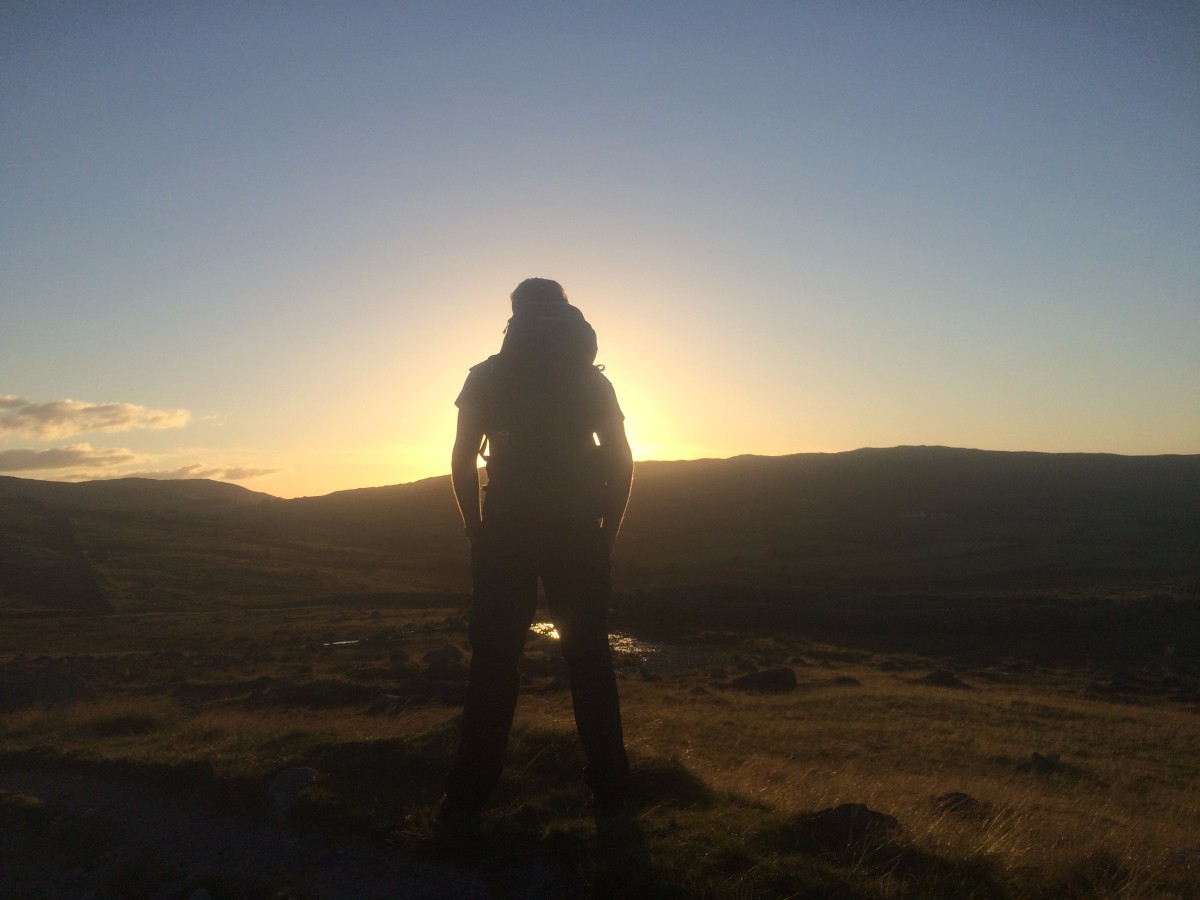 Sun setting on the Mournes

We diverted away from hare’s gap making a direct approach to our chosen summit for the evening – Slievenaglogh.

The sun had now entirely set and the moon sat perched directly over hare’s gap, frosting the landscape with a silvery glow.

Before long we arrived at the summit of Slievenaglogh and got to work putting up John’s tent. More hands make lighter work, particularly in the windy conditions we found on the summit.

John turned to me and said “Take off your pack Ed!” – it was so light I had forgotten I was wearing it.

With John’s tent up, I attended to my bivi bag, deciding to make my bed for the night inside a little stone wall arrangement someone had previously built out of stones from the summit cairn. This was taking the notion of a summit camp quite literally, asides from sleeping on the cairn itself I was as close as you could get to bivvying on the actual summit. 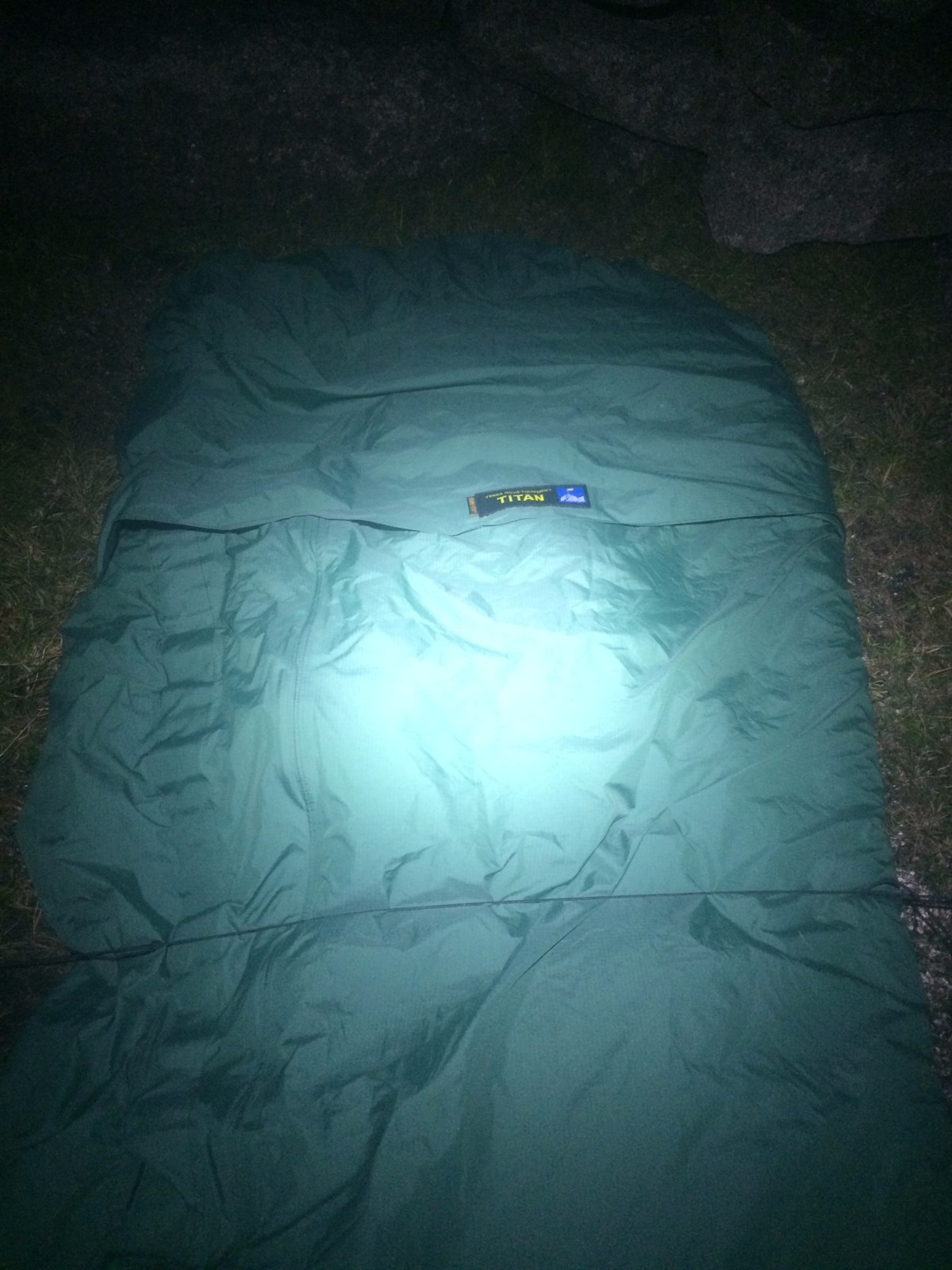 Heads up! If you’re new to camping and you’re wondering about “bivvying” click here to check out our neat summary on why it’s great!

I pinned my bivvy bag down with a bungee cord and a couple of tent pegs (something you really shouldn’t have to do with a bivvy like the Titan – sort it out Terra Nova!)
Safe in the knowledge that my bed for the night wouldn’t go fluttering off into the distance, we gathered some water up and had a few cups of tea. We played some music and chatted for a while, both still in awe of the great evening we had chanced upon.

It was quite windy and the sky was as clear as crystal, so there was definitely a chill in the air.

I quickly prepared a dehydrated meal and wolfed it into me before retiring to my bivvy bag and the view I was met with was without a doubt the best I have seen in the Mournes so far.

Directly ahead the moon gently lit the reservoir with a wonderful silvery blue glow.

Overhead the sky was completely cloudless. The stars twinkled bright and sharp against the backdrop of the milky way. Every once in a while a shooting star would make an appearance. I lay with my head out watching the spectacular light show in the sky until I drifted off asleep.

The bivvy bag is a bit of a gamble sometimes. Whatever is going on around you – you get more of it. If its a night of nothing but rain and wind you’ll be probably be more miserable for not having brought a tent. However on a night like last night laying under a sheet of brightly coloured canvas would have felt like a sin. This was one of the times when the bivvy gamble brought in the jackpot and I was glad not to have been dissuaded by the fact that I had work the next day.

After a night of restful sleep we woke and had a quick breakfast and a good strong coffee. I was amused by the light, tiny little pack sitting next to my bivvy, ready to pack everything into again. It
seemed crazy that everything I needed (and a couple of things I didn’t) for a night on the hills would pack into such a small, light pack.

Part of the reason for this is the choice to use a half-bag (pied d’elephant) in combination with my down jacket. It compresses down extremely small and provides more than enough warmth.
Combined with the xtherm mat I had a nice combination of lightweight, packable and toasty warm. When you spend worknights in the hills it pays off to have a decent sleeping system, shivering all night and going home to sleep doesn’t cut it. 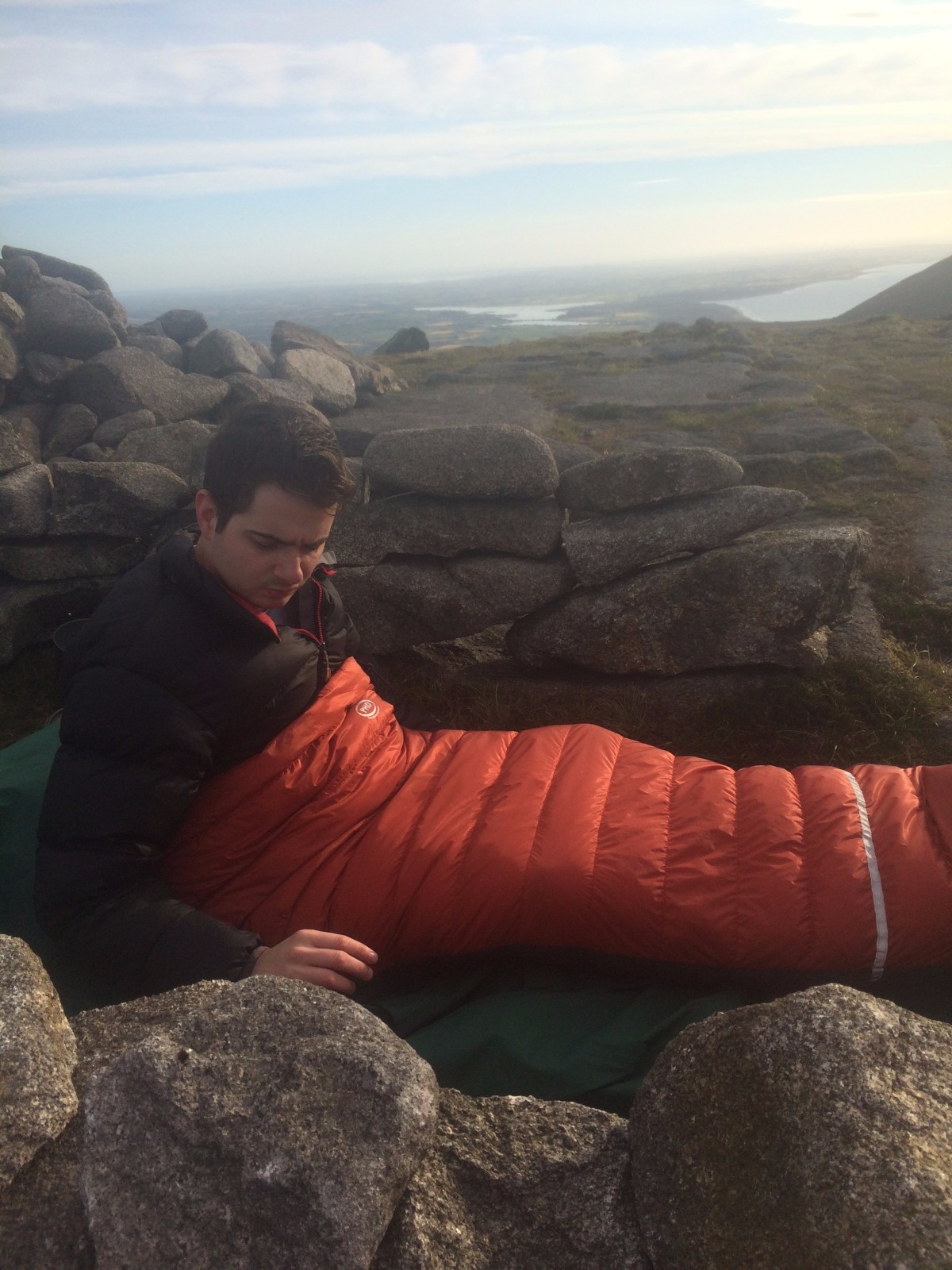 Letting some air at the half bag before packing up

Before long we were on our way again and we descended towards the Brandy Pad. The Brandy Pad is always a welcome sight no matter how many times I walk it. We started with fantastic views of
the reservoir and the regal looking Slieve Bearnagh. We passed the castles of Commedagh and ended with a view down over Annalong valley before heading up towards the saddle of Donard and
Commedagh.

View from the Brandy Pad

The view down Annalong valley is one of the finest of the Mournes and one of my personal favourites. I must come back soon for a stroll down the valley.

Sadly my phone camera really didn’t do the valley justice in the overcast light. Just so you know just how special it looks, here’s a photo of the same view from a previous trip: 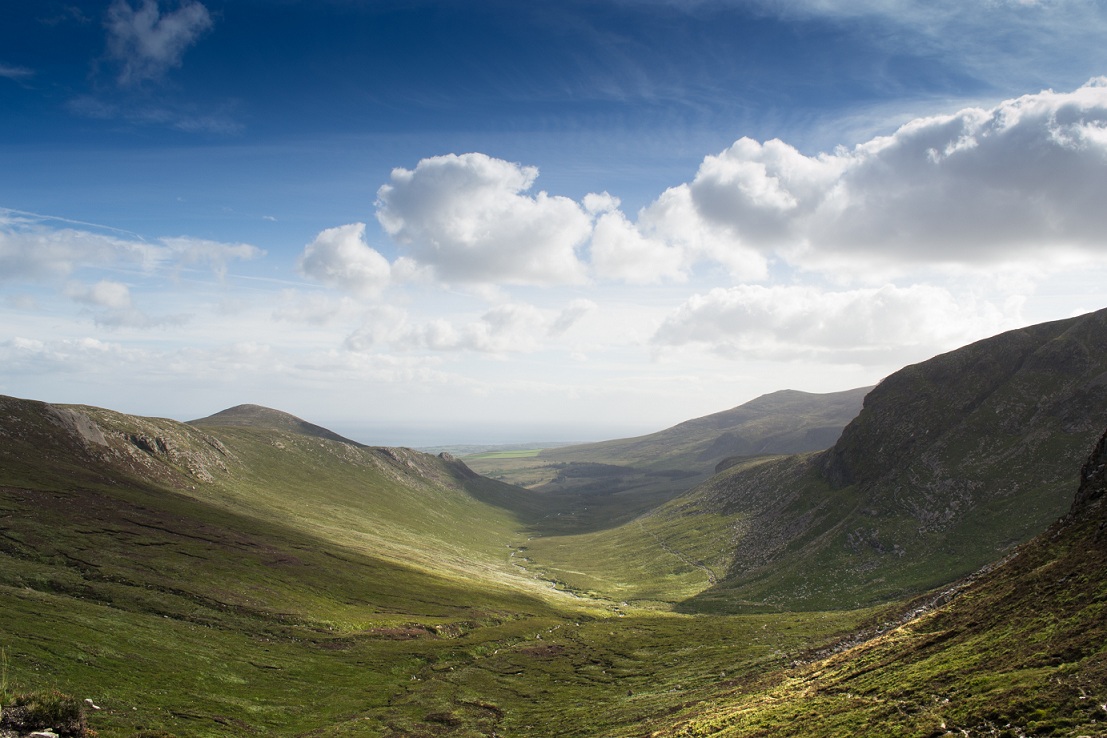 Annalong Valley – one of the finest places in the Mournes

We met quite a few groups of hikers on our way down the glen river trail. The track up Slieve Donard is the Mournes’ own Royal Avenue, with group after group from many different countries and walks of life. It’s great to see so many people enjoying the Mournes, I hope at least some of them come back to try somewhere like Lamagan or Bearnagh, which I’ve always found to be much more interesting in terms of both the hike and the view.

I rushed on towards the bus stop, arriving just in time to get the bus to Belfast to go to work. After such an amazing night in the hills it’s so much easier to sit in front of a computer and put the work in. The mind is rejuvenated and the body has breathed the fresh mountain air.